Spedale di S. Spirito in Sassia
(Vasi at work in the Grand View of Rome) When in 1759 Giuseppe Vasi published this etching, Spedale di S. Spirito, the main hospital of Rome, had been recently enlarged by Pope Benedict XIV with the addition of a new long ward (Braccio Nuovo) having the same design as that built in 1478 by Pope Sixtus IV (Braccio Vecchio aka Corsia Sistina). The two wards formed a very long front which Vasi accurately depicted with the analytical approach of an architect, rather than that of a painter.
The view is taken from the green dot in the 1748 map below. In the description below the plate Vasi made reference to: 1) Palazzo del Commendatore; 2) Braccio Vecchio; 3) Braccio Nuovo; 4) dome of the chapel inside Braccio Vecchio. The map shows also: 5) Church of S. Spirito in Sassia; 6) S. Lorenzo in Borgo; 7) Spedale de' Pazzi (madhouse). 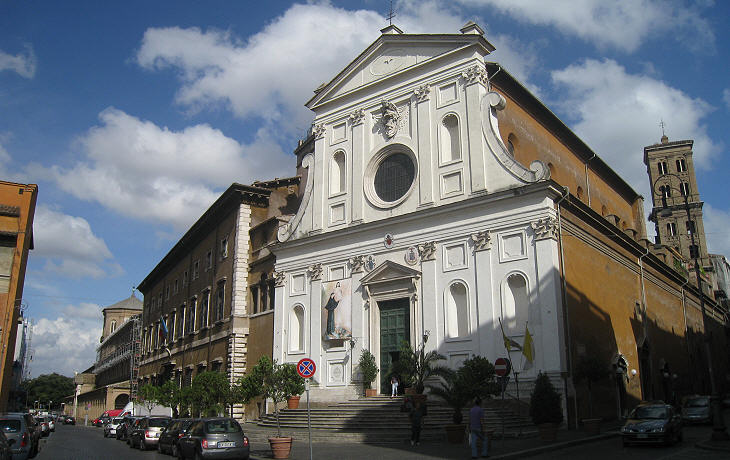 In the 1880s, in the frame of a general redesign of the River Tiber bed, high walls were built on its banks to prevent the occurrence of floods; Braccio Nuovo was pulled down and today's view shows in its place the trees of a small modern square at the western end of Ponte Vittorio Emanuele II.
Similar to Braccio Nuovo, Spedale de' Pazzi was demolished. It was added to Spedale di S. Spirito in 1725 by Pope Benedict XIII who relocated there the lunatics who were previously housed in a building near SS. Bartolomeo ed Alessandro; some of its premises are shown in the plate covering Porta S. Spirito. 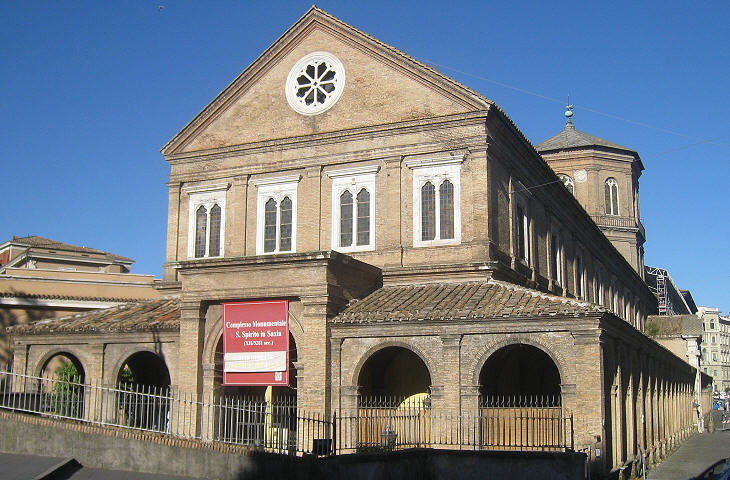 Sassia is a reference to Saxons because on this site was located Schola Saxonum, a hostel for (Anglo-)Saxon pilgrims which according to tradition was founded in 728 by King Ine of Wessex who in 726 abdicated and travelled to Rome to increase his chances of being welcomed in heaven.
The hostel was rebuilt by Pope Leo IV and in 856 it was visited by King Ethelwulf of Wessex; after the 1066 Norman conquest of England the arrival of pilgrims greatly diminished and so did the donations from England; the hostel fell into abandonment. 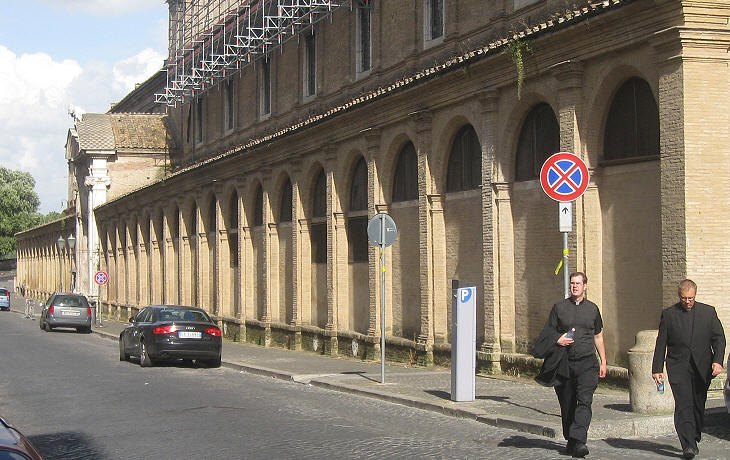 Northern side of Corsia Sistina

In 1198 Pope Innocent III was granted permission by King John Lackland to build a hospital on the site of the former hostel; the new institution was placed under the protection of the Holy Spirit and the management of Guy de Montpellier, a Templar Knight who designed the double cross which is the emblem of the hospital.
Spedale di S. Spirito knew a period of great development during the whole XIIIth century, but it declined after the move of the papal residence to Avignon. In 1409, during the Great Schism, it was turned into a fortified site by one of the factions which competed for supremacy in Rome; the patients were all killed.
In 1446 Pope Eugenius IV reorganized the hospital and its governance by establishing that the prior in charge of the institution should be chosen among the prelates of the papal court. 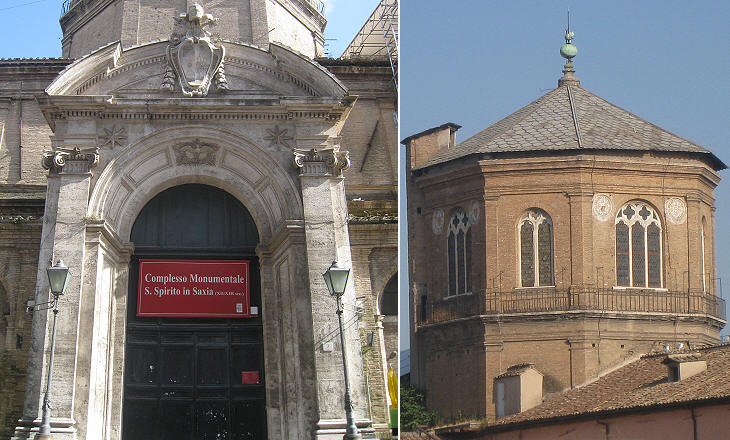 In 1470 a fire damaged the hospital; Pope Sixtus IV realized that the old structure was more appropriate to a jail, than to a place where the sick could recover their health and he decided to build a brand new complex; the new hospital was completed in 1478; Baccio Pontelli is one of the architects who were involved in its design.
Corsia Sistina consisted of a very long rectangular hall (130x13 yd) having at its centre an octagonal dome; it had a façade at the end of the hall which was reconstructed in 1938 based on one of the 46 frescoes in the interior of the building which portray events associated with the history of the hospital.
The image used as background for this page shows the heraldic symbol of Pope Sixtus IV (an oak with intertwined branches). 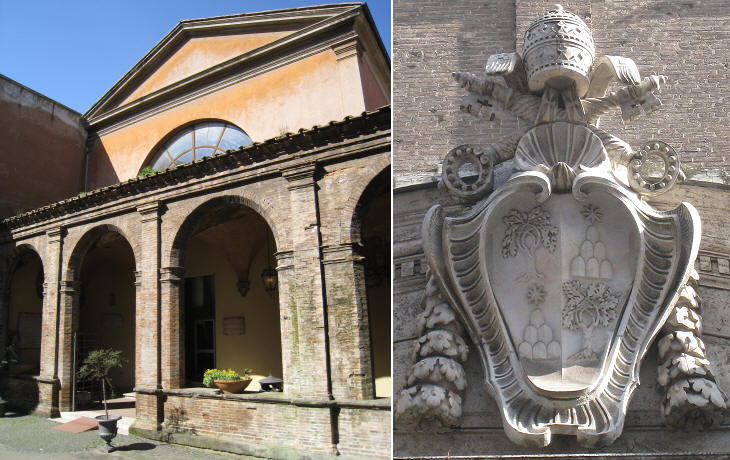 The hospital was pillaged by the troops of Emperor Charles V during the 1527 Sack of Rome and it was flooded in 1598. These mishaps did not interrupt its enlargement with new wards and other facilities, including Conservatorio di S. Tecla, a charitable institution for female foundlings. 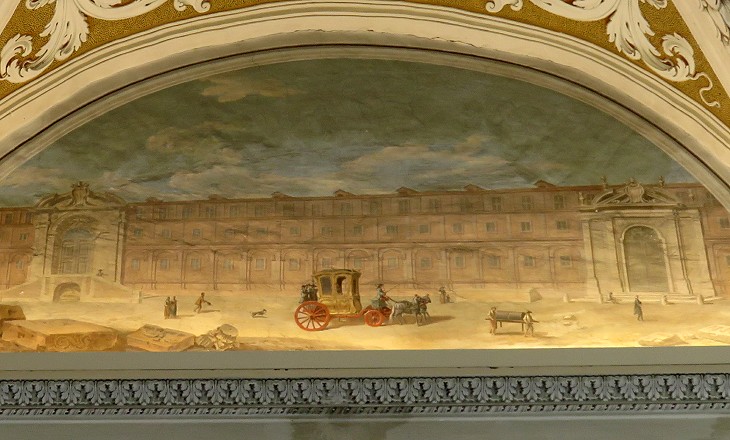 Pope Benedict XIV, in addition to building a new ward, asked Ferdinando Fuga to redesign the cemetery of the hospital.

Pope Pius VI placed a colossal coat of arms at the entrance of a new section he added (today it is in a courtyard); the comparison between the coat of arms before and after restoration is the icon of a page illustrating the changes which have occurred in Rome in the last ten years; you can learn more about the initiatives of Pope Pius VI in a page on his heraldic symbols.
In the great Lazaretto of San Spirito there has been prepared for the use of the artists a very fine anatomical figure, displaying the whole muscular system. Its beauty is really amazing. It might pass for some flayed demigod, even a Marsyas (it opens in another window). Thus, after the example of the ancients, men here study the human skeleton, not merely as an artistically arranged series of bones, but rather for the sake of the ligaments with which life and motion are carried on.
J. W. Goethe - Italian Journey - January 1787 (during the pontificate of Pope Pius VI) - Translation by Charles Nisbeth.

Museo di Roma a Palazzo Braschi: St. Camillus de Lellis (canonized in 1746) helps saving the patients of the hospital during the 1598 flood by Pierre Subleyras

New facilities for Spedale di S. Spirito were built in 1928 on the side towards the river. Corsia Sistina continued to be used as a ward hospital until the 1980s. 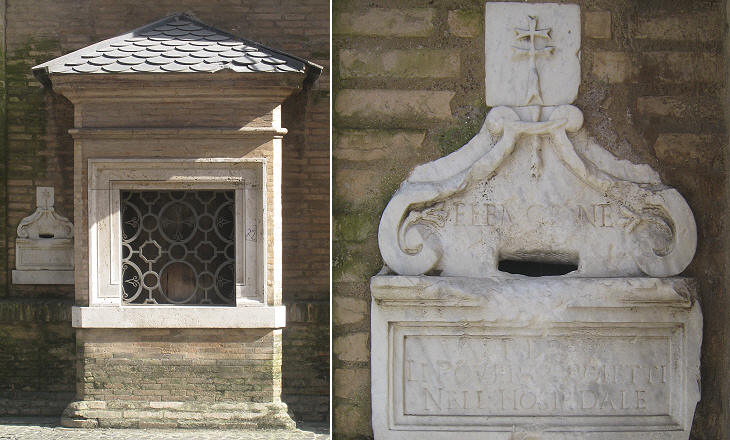 There is also a grate towards the street, where little Infants are put into a square hole of a Turn, and so turned in by Night by their unlawful Mothers, who not daring to own them, would otherwise dare to destroy them. (..) The person that brings the Child in the Night rings a little Bell, whose Rope hangs at the outside of that grate, and an Officer within comes presently and receiveth it; and having first asked whether it be baptiz'd or no, carrieth it presently away, and recommends 'it to a Nurse.
Richard Lassels' The Voyage of Italy, or a Compleat Journey through Italy in ca 1668
In 1421 Spedale degli Inncocenti was founded in Florence; it took care of orphans, foundlings and children of families in temporary difficulties; Pope Sixtus IV decided that Spedale di S. Spirito should have a section having a similar purpose; a revolving cupboard placed near the entrance to the hospital allowed the safe and secret abandonment of babies; wet nurses were ready to take care of them; the cross of the institution was marked on their left foot; a few days later, after their health had been checked, babies were sent to families in the countryside who reared them in return for a small monthly allowance; at the age of ten they returned under the direct jurisdiction of the institution; boys were employed at the many farms owned by Spedale di S. Spirito; girls very often ended up in a charitable institution and became nuns. In 1759 in consideration of the growing number of abandoned babies it was forbidden to leave legitimate children.
In Florence left babies were given the Innocenti surname or a similar one; in Rome they were more commonly called Esposti; the first name was often that of the saint of the day on which they were found. 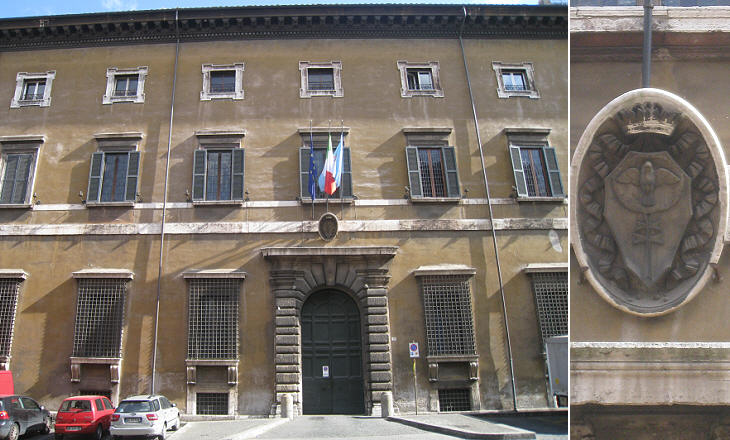 (left) Façade; (right) coat of arms of the hospital

The officer in charge of Spedale di S. Spirito was called Commendatore, a title which in origin indicated the administrators of the properties of a large abbey; in 1565 Commendator Bernardino Cirillo started the construction of a palace to house the administrative offices of the institution and a series of ancillary facilities such as a medical library and a pharmacy.
The library (you may wish to see some of its halls - it opens in another window) is named after Giovanni Maria Lancisi (1654-1720), a physician who is still known for his studies of anatomy and for Acqua Lancisiana, a mineral spring which he recommended.
The building has the appearance of a family palace; its architect was traditionally assumed to be Ottaviano Mascherino (and Vasi supported this opinion), but today this attribution is questioned. 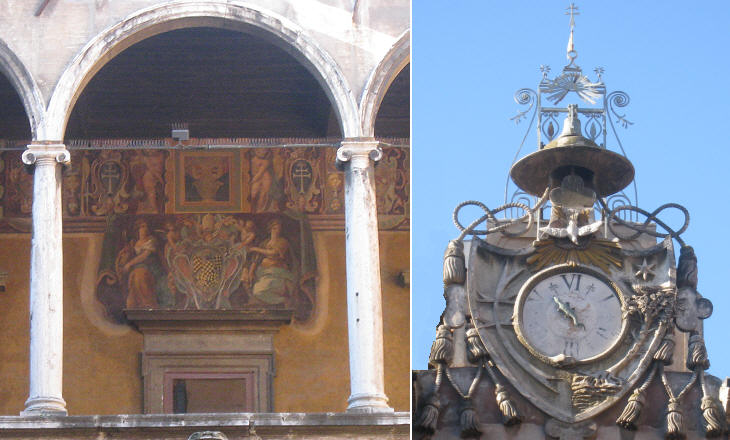 Pope Paul V provided the hospital with an adequate supply of water (Acqua Paola); he also ensured the institution had a major source of income by founding Banco di S. Spirito in 1605; for a couple of years the activities of the new bank were carried out inside Palazzo del Governatore, then they were moved to a house in Rione Ponte and in 1667 to a palace which had housed the Mint. The bank continued to belong to the hospital until 1917.

Spedale di S. Spirito owned many buildings in Rome and many farms in the countryside; the symbol of the hospital appears on a large number of property tablets around the city; Palidoro and S. Severa along Via Aurelia and Manziana near Lake Bracciano were villages which entirely belonged to the hospital. 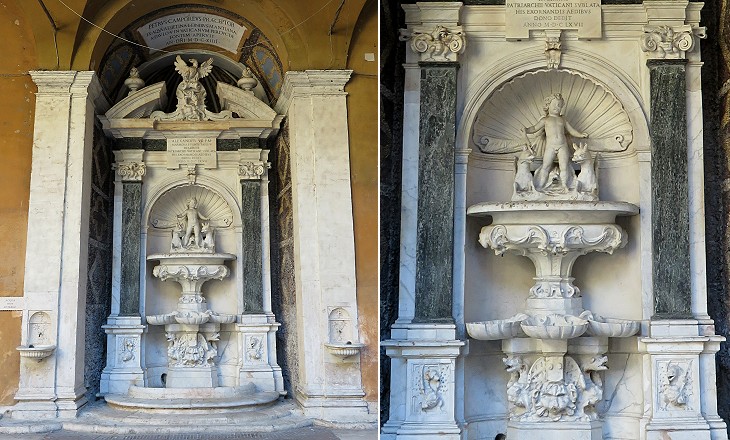 Fountain built by Pope Paul V at the side of the new façade of S. Pietro in 1614 and donated to Palazzo del Commendatore by Pope Alexander VII when he redesigned Piazza S. Pietro in 1667 The small church of Schola Saxonum was originally dedicated to the Virgin Mary; its current name and dedication were established in the XVIth century; it was rebuilt several times until Pope Paul III ordered its reconstruction which was completed by 1545; Commendator Bernardino Cirillo however felt that the new layout and decoration of the church did not comply with the recommendations of the Counter-Reformation and promoted a major redesign of its interior; this activity was completed during the pontificate of Pope Sixtus V, whose coat of arms replaced that of Pope Paul III at the top of the façade.
You may wish to see the church in a 1588 Guide to Rome. 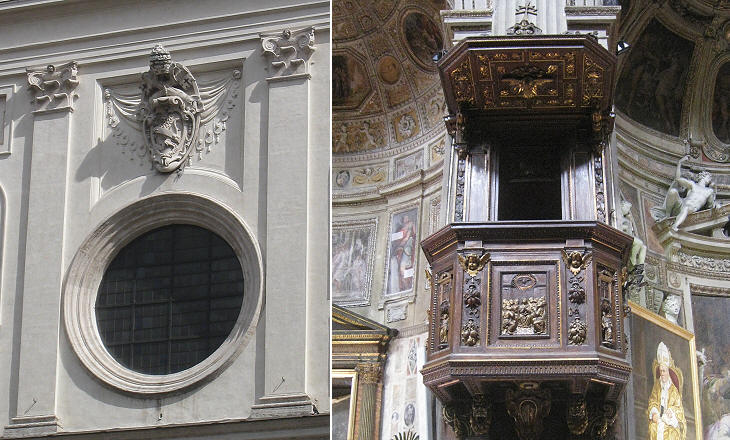 (left) Detail of the façade with the coat of arms of Pope Sixtus V; (right) pulpit by Alessandro Castaldo

In the interior there is not a square inch without decoration: the ceiling and the organ of the church belong to the time of Pope Paul III and can be seen in separate pages. Several of the physicians who worked in the hospital are buried in the church; you may wish to see the monument to the anatomist Pietro Giavota. 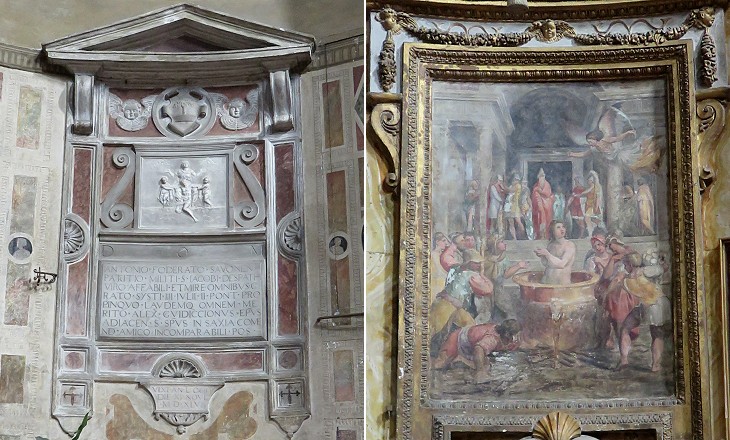 (left) XVIth century works of art: (left) Monument to Antonio Foderato (d. 1548) by Giacomo del Duca; (right) Martyrdom of St. John the Evangelist by Marcello Venusti. The depiction of martyrdoms was recommended by Counter-Reformation theologists (you may wish to see the same subject at SS. Nereo e Achilleo with other similar paintings) 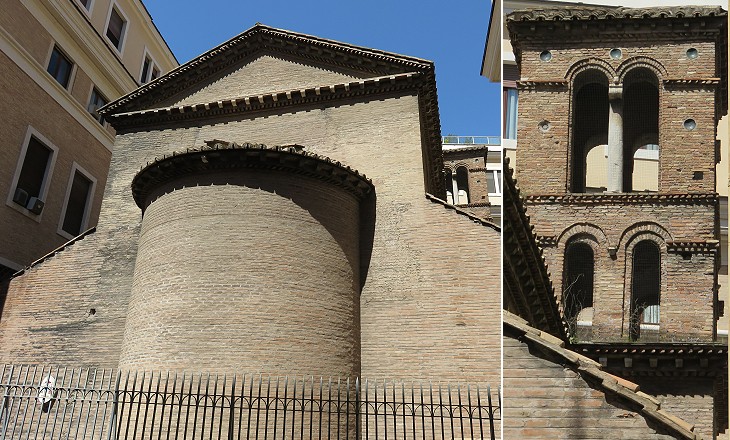 S. Lorenzo in Borgo was built in the XIIth century and in the XVth century Cardinal Francesco Armellini incorporated it into his palace, which was bought by the Cesi in 1565; the church was donated in the XVIIth century to the Piarist Fathers and it was redesigned by Francesco Navone in 1737. It was also known as S. Lorenzo in Piscibus, most likely after a nearby fish market. 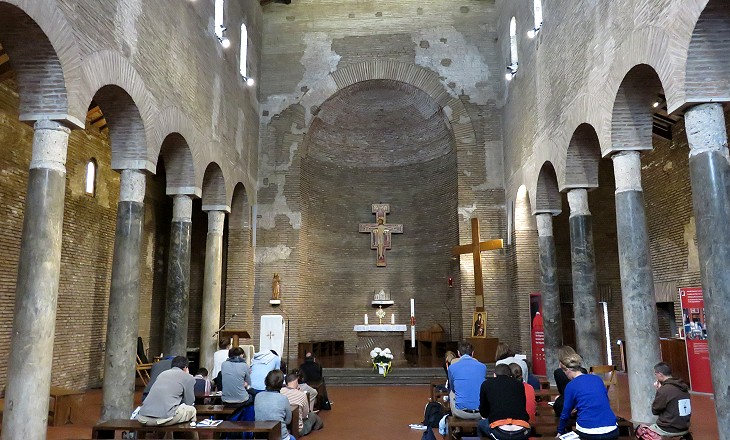 Interior after the demolition of its XVIIIth century decoration

The opening of Via della Conciliazione led to pulling down the façade by Navone in the late 1930s. Eventually the church was deprived of all its altars and paintings and brought back to its assumed medieval appearance with an overall very poor result.

Next plate in Book 9: Spedale di S. Giovanni in Laterano.
Next step in Day 8 itinerary: S. Maria in Traspontina.