Marino
(a detail of G. Vasi's Grand View of Rome)

The greatest alarm arose at the circumstance, that assemblies of the Latin states were held at the grove of Ferentina; and an unequivocal answer was given to the Romans on their ordering soldiers from them, "that they should cease to issue their orders to those of whose assistance they stood in need: that the Latins would take up arms in defence of their own liberty, rather than for the dominion of others."
Livy - History of Rome - Book VII:25 - Translation by Daniel Spillan. 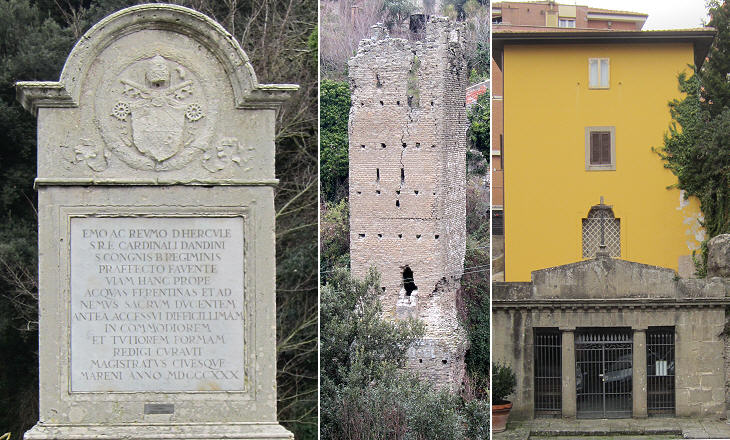 After leaving Grotta Ferrata, we came in a few moments to Marino, a town finely situated on a hill, and looking very inviting as a place of summer retreat. Hence we passed into a deep glen beautifully wooded with noble trees, memorable as the place of meeting of the Latin tribes. (..) A more inviting spot for a deliberative assemblage could hardly be found. (..) We found the valley occupied neither by warriors nor statesmen, but by groups of women engaged in the peaceful employment of washing linen in the very stream in which, as Livy relates, a Latin chieftain was drowned. It was a pretty sight, - the unbonneted heads and picturesque dresses of the women blending well with the scenery around them; while the homely associations usually belonging to such household duties were somewhat relieved by the sparkling purity of the running waters, the bending foliage, and the blue sky.
George Stillman Hillard - Six Months in Italy in 1847-1848
The history of the Latins, the Italic people who lived south of Rome, was closely associated with sacred groves and their nymphs (you may wish to see a page on Dodoni, the most famous Greek sacred grove). After Alba Longa, their main town, was destroyed by the Romans, the Latins used to meet at Ariccia in a grove sacred to Diana. Livy indicates that at a later time, when the Latins were already in a subordinate position to the Romans, these assemblies took place at Locus Ferentinae, a grove on each side of a small stream in a deep ravine. The grove and the stream were sacred to Ferentina, a nymph. The link between stream and holiness has survived to our day in the name of Acquasanta, a nearby cave housing a holy image of the Virgin Mary. The site was already mentioned in XIIIth century records whereas the portico at its entrance was not added until 1819. 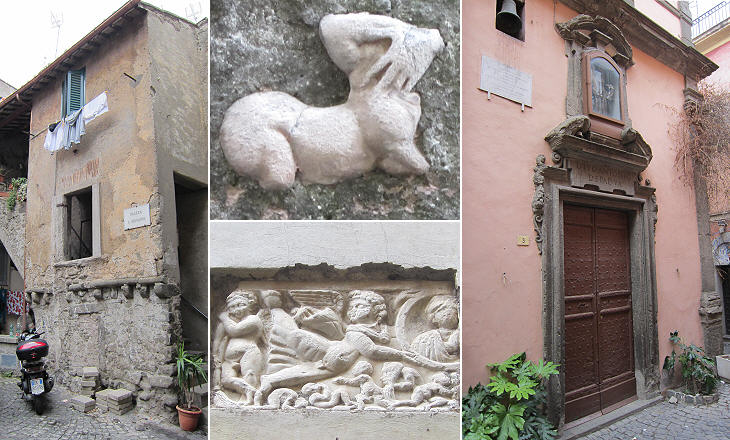 (left) House at "Castelletto"; (centre) ancient reliefs walled on buildings of Marino; (right) S. Antonio, a church built in 1833 on the site of a prison at "Castelletto"

Pliny the Elder (Natural History - Book III) indicates Castrimoenienses in a list of Roman colonies in the Alban Hills. Historians and archaeologists have associated this small fortified settlement with Castelletto, a group of medieval houses of Marino which were built above ancient structures. The narrow streets of Castelletto are arranged in a grid similar to that which characterized Roman forts and towns. Marino is located on the eastern ridge of Acqua Ferentina and it was first referred to as Castro Mareni in 1114. 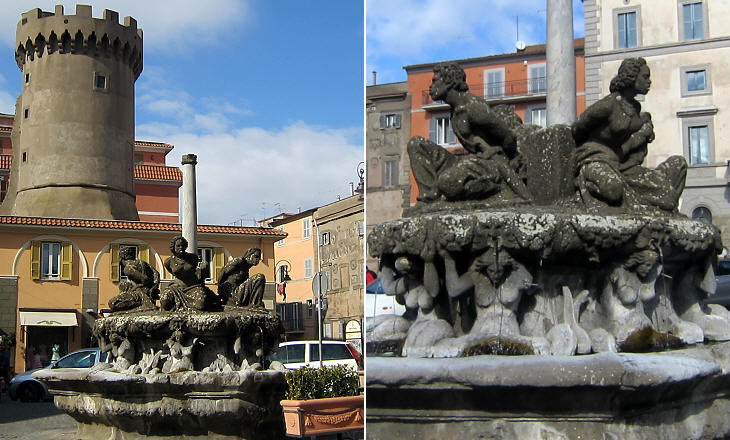 In the XIIIth century Marino was acquired by the Frangipane, at the time a very powerful Roman family. In 1944, similar to other towns on the Alban Hills, Marino was bombed and the destruction of a group of houses unveiled one of the towers built by the Frangipane to protect Porta Napoletana, the southern gate of the town. In the Middle Ages the initial section of Via Appia from Rome to Velletri via Albano was abandoned. It was replaced by Via Corriera, an alternative route which crossed Marino.
Fontana dei Quattro Mori was built in 1632 to celebrate the victory of the Christian fleet at Lepanto in 1571 and the return to Marino of Marcantonio II Colonna, commander of the Papal galleys. The fountain portrays four Ottoman prisoners tied to a crowned column, a heraldic symbol of the Colonna; the basin is supported by mermaids, another heraldic symbol of that family. In origin the fountain was located near Palazzo Colonna and it was damaged when the building was bombed. You may wish to see it on the day it pours wine (Sagra dell'Uva). The image used as background for this page shows a detail of an Ottoman woman. 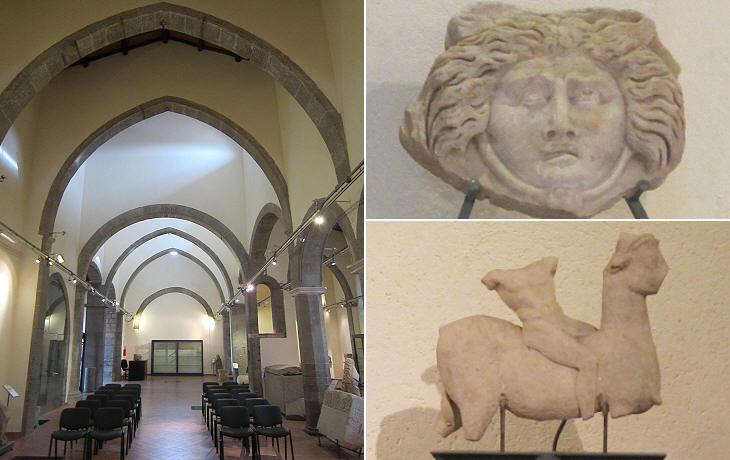 (left) Interior of S. Lucia, a former parish church near the Frangipane tower; it now houses a small archaeological museum; (right) some of its exhibits

In the XIIth century the Cistercians introduced Gothic architecture to many parts of Italy where they built new abbeys or restored old ones, including SS. Vincenzo e Anastasio alle Tre Fontane in the environs of Rome. S. Lucia is thought to have been built at the request of Jacopa de' Settesoli, widow of a Frangipane and a follower of St. Francis of Assisi. The church housed a miraculous image of the Virgin Mary which eventually was moved to S. Barnaba, a new large church built in the XVIIth century.
In 1253 Giovanni Frangipane, son of Jacopa, bequeathed Marino to the abbots of S. Saba in Rome and of S. Nilo di Grottaferrata, probably in compliance with a wish expressed by his mother. 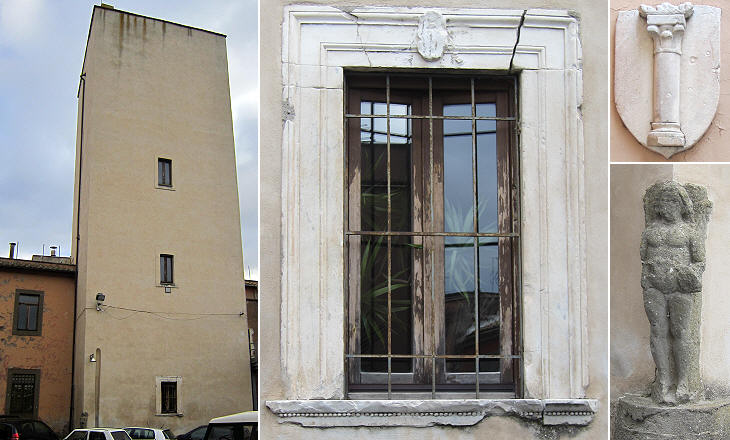 Courtyard of Palazzo Colonna: (left) medieval tower; (centre) window with a frame in part made by using an ancient piece of marble; (right-above) Colonna coat of arms; (right-below) small statue walled at the corner of the tower

In 1266, Marino was bought by the Orsini, another important Roman family; they retained the town until the end of the XIVth century; in 1417 it was acquired by the Colonna with the help of Pope Martin V, a member of the family. At that time the entrance to the town from Rome was protected by Rocca Orsini, a small castle with a tall tower. 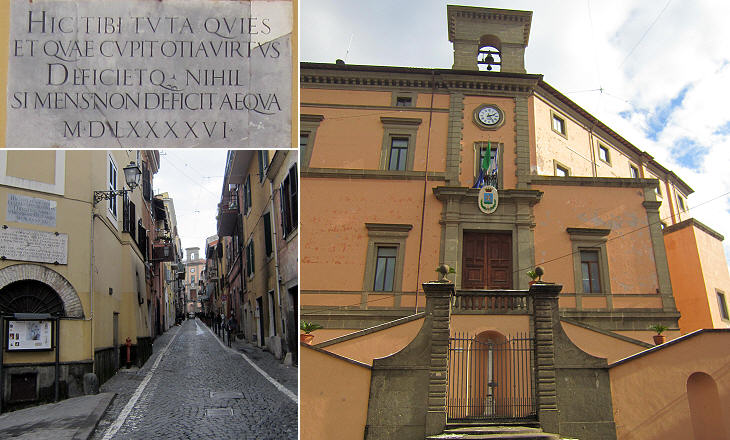 (left-above) 1596 inscription which was placed above Porta Romana, a gate which was pulled down in 1889; (left-below) the straight street opened by the Colonna from the gate to their palace; (right) Palazzo Colonna

The 1571 victory at Lepanto brought fame to Marcantonio Colonna, but he (and his successors) had to bear the financial consequences of having hired 12 manned galleys from the Grand Duke of Tuscany. When towards the end of the century important Roman families started to build large villas at Frascati, Cardinal Ascanio II Colonna, son of Marcantonio II, decided to turn Marino into a summer retreat, rather than to build a new expensive villa from scratch.
Hic tibi tuta quies et quae cupit otia virtus deficietq(ue) nihil si mens non deficit aequa "Here you will find the quiet and rest which virtue desires and nothing lacks to those who have a balanced mind" the inscription which he placed on Porta Romana is more appropriate for the entrance to a villa, rather than to a town crossed by an important road. It is similar to those placed by Cardinal Ferdinando de' Medici at the gate of his villa near Porta Pinciana a few years earlier. 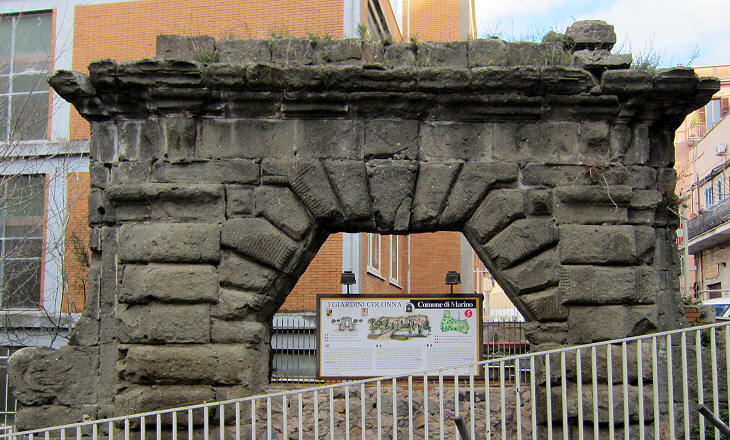 One of the two entrances to Giardino Colonna outside Porta Romana

Changes made to the road from Rome and the urban development of the town have lessened the appeal of two identical portals facing each other which gave access to the Colonna Gardens; their western section included the ravine of Acqua Ferentina and the ancient grove.
At the beginning of the XIXth century part of the gardens were turned into farming fields; eventually the construction of the railway to Castelgandolfo led to the urbanization of the ravine with the exception of the ancient grove, which was known as il barco, a name usually indicating a hunting ground. 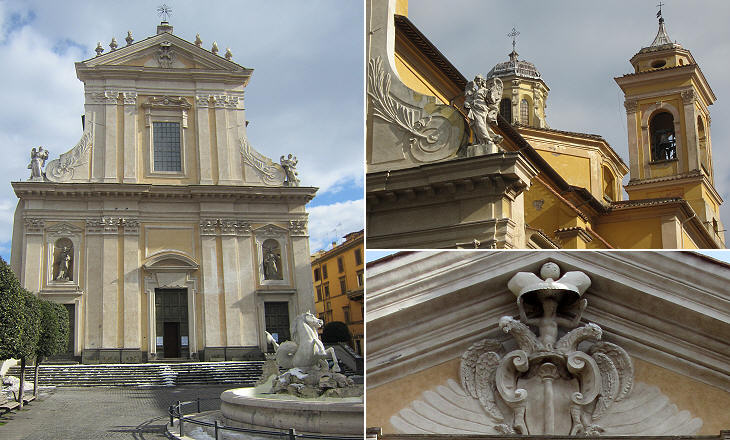 S. Barnaba: (left) façade and in the foreground a modern fountain; (right-above) bell tower and dome; (right-below) heraldic symbols of the Colonna

The new church was dedicated to St. Barnabas, an economy-driven decision, because this follower of St. Paul was invoked against hailstorms, a great danger for the vineyards surrounding Marino which were (and are) the main resource of the town.
The church was completed in 1662 and it was designed by Antonio del Grande, the architect of the Colonna, for whom he built palaces at Genazzano and Paliano and the Great Gallery of Palazzo Colonna in Rome. 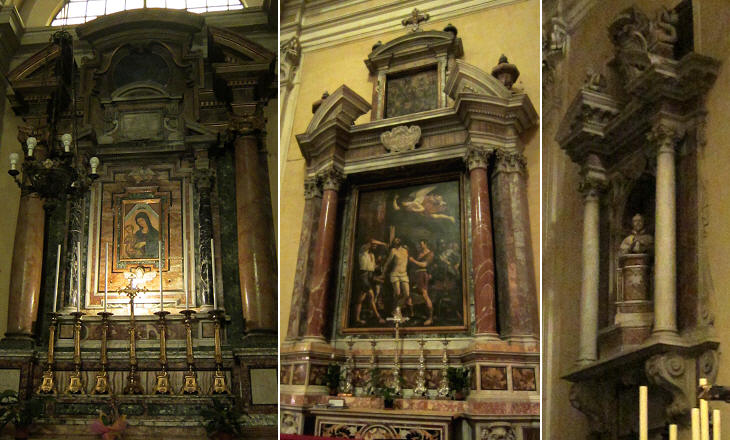 The Colonna embellished the church with some elaborate altars, but overall the interior of S. Barnaba is rather bare, when compared to other churches built in the same period.
In 1780 the importance of Marino was affected by the reopening of Via Appia along its traditional route and this explains why the town was generally ignored by Grand Tour travellers in their accounts.
Eventually in 1816 the Colonna gave up their feudal rights on Marino and they gradually sold their properties. 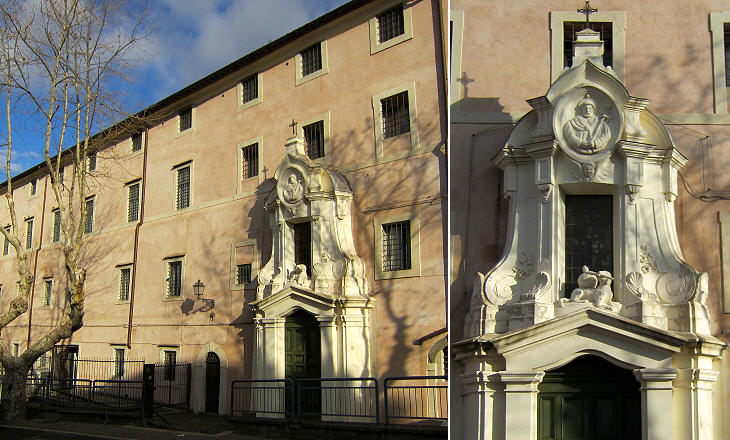 Immediately outside Marino a huge Dominican nunnery with its small windows conveys the idea of a prison, which in a sense it was because the suore gavotte, the nuns who lived there, followed a very strict rule. It has an interesting XVIIIth century church by Giuseppe Sardi with an elaborate entrance. It was built at the request of Maria Isabella Colonna, who was a nun at SS. Domenico e Sisto. 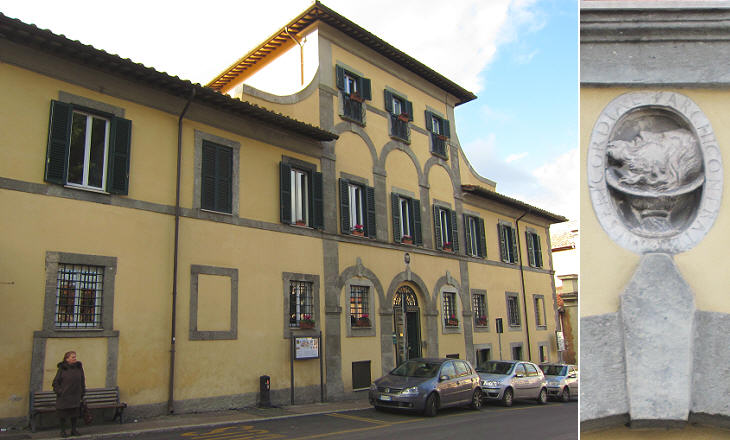 This small palace opposite the nunnery was designed by Girolamo Rainaldi in 1615 and used as an inn for travellers coming from Rome. It was modified at the end of the century by Carlo Fontana. In 1776 it was bought by Pier Francesco Foggini, a Florentine theologian who supported the suppression of the Jesuit Order. At his death he bequeathed the building to Collegio Bandinelli, a charity of the Florentines living in Rome, whose patron saint was St. John the Baptist (for a series of similar reliefs and for the activities of Arciconfraternita della Misericordia see S. Giovanni Decollato).

Next step in your tour of the Environs of Rome: Velletri