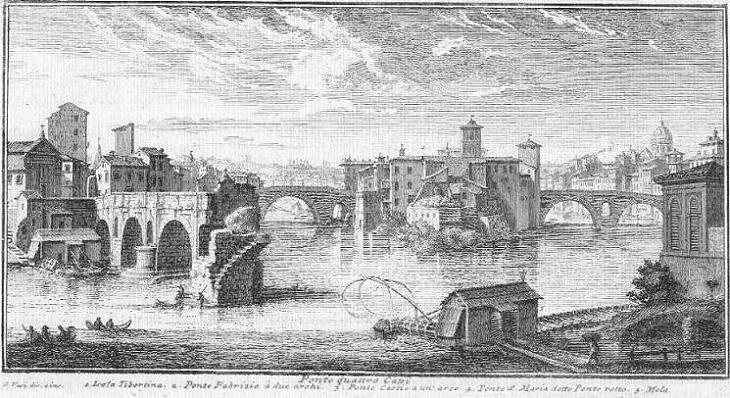 In this 1754 etching Giuseppe Vasi called Ponte Quattro Capi (Four Heads Bridge) the combination of two Roman bridges (Ponte Fabricio and Ponte Cestio) because together they had four heads; however in the Guide to Rome which he published in 1761 he gave a more traditional explanation of the name: Ponte Fabricio is called Quattro Capi because of the two four-headed herms which are placed at its entrance from the city (one of them is shown in the image used as background for this page). 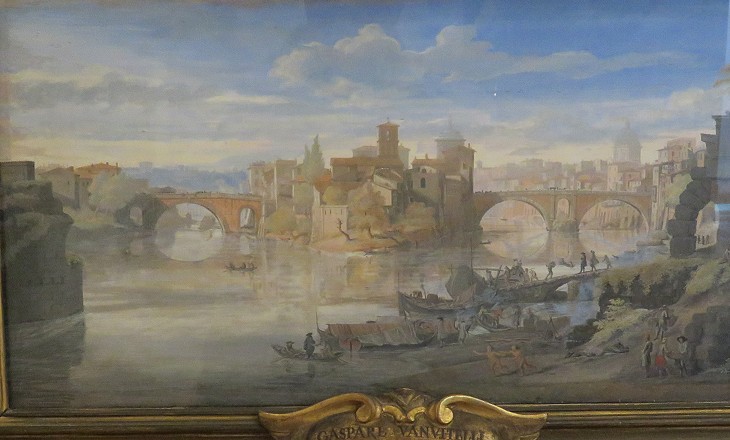 Gaspar Van Wittel (1653-1736) was a Dutch landscape painter who spent most of his life in Rome. His son Luigi Vanvitelli became an important Roman architect. Van Wittel painted several vedute, large-scale highly detailed landscape paintings, including a downstream view of Isola Tiberina which is very similar to the etching by Vasi.
The view is taken from the green dot in the small 1748 map here below. In the description below the plate Vasi made reference to: 1) Isola Tiberina; 2) Ponte Fabricio; 3) Ponte Cestio; 4) Ponte S. Maria (Ponte Rotto); 5) Mill. 3) is covered in more detail in another page which shows an upstream view of Isola Tiberina.

A new bridge (Ponte Palatino) immediately downstream of Ponte Rotto allows a point of view very similar to Vasi's one. The overall view is pretty much the same, but the many actions taken to prevent floods in the late XIXth century have modified the river banks and lowered the average level of the water, so that Isola Tiberina is usually surrounded by a platform. In the foreground the image shows the only remaining arch of Ponte S. Maria, the bridge built by Pope Gregory XIII in 1575 and which became known as Ponte Rotto (Broken Bridge) after it partially collapsed in 1598. 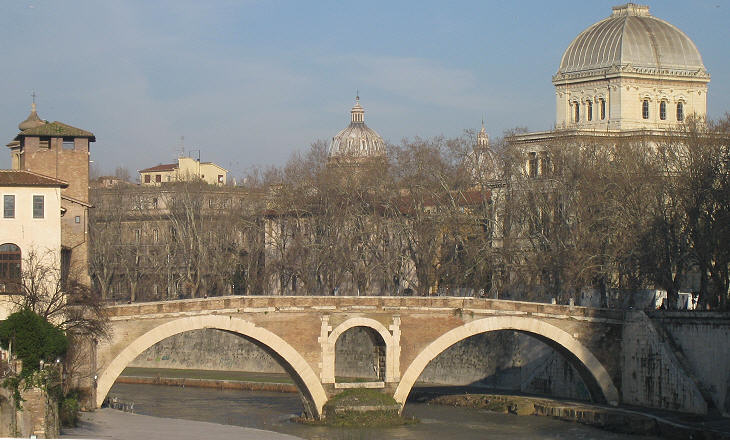 Ponte Quattro Capi or Fabricio; other buildings: at the far left of the image Torre Caetani; in the centre dome of S. Carlo ai Catinari; to the right dome of S. Andrea della Valle and Tempio Maggiore, the main synagogue of Rome

The fifth (ancient) bridge joining Rome and the Iland, and next to the Capitolium, is called Ponte di quattro Capi, and was of old called Tarpeius, of the Rocke Tarpeia, which is in the Mount Capitolino, and was called Fabricius of the repairer, and it is seventy foot long, and hath but one (!) Arch of stone.
Fynes Moryson - An Itinerary: Containing His Ten Years Travel Through .. Italy (in 1594)
The bridge was built in 62 BC by Lucius Fabricius, curator viarum, i.e. officer in charge of street maintenance. The bridge has two arches and a minor opening to allow a larger flow of water when the level of the river grows: the inner structure is made up of blocks of tufo and peperino; the facing with travertine was in part replaced with bricks in the late XVIIth century by Pope Innocent XI. 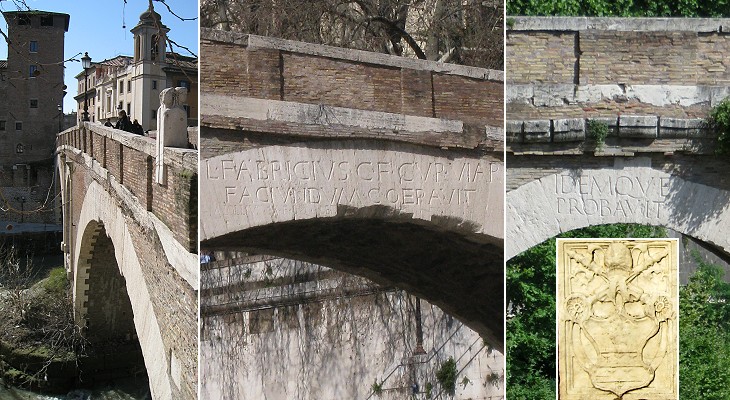 (left) The bridge seen from its entrance from Rome with one of the two herms and S. Giovanni Calibita at the other end (see a larger and better photo and a 1909 watercolour by Yoshio Markino); (centre) inscription on one of the main arches; (right) inscription IDEMQUE PROBAVIT meaning "He tested it himself" on the minor opening (see a similar inscription at Dion in Greece); (inset): coat of arms of Pope Innocent XI (now near S. Giovanni Calibita)

Lucius Fabricius was perhaps a conceited man because he had his name and title written four times on the bridge, but he definitely was an experienced engineer and a scrupulous one, because he was personally involved in testing the solidity of the bridge.
Learn more about Roman inscriptions. 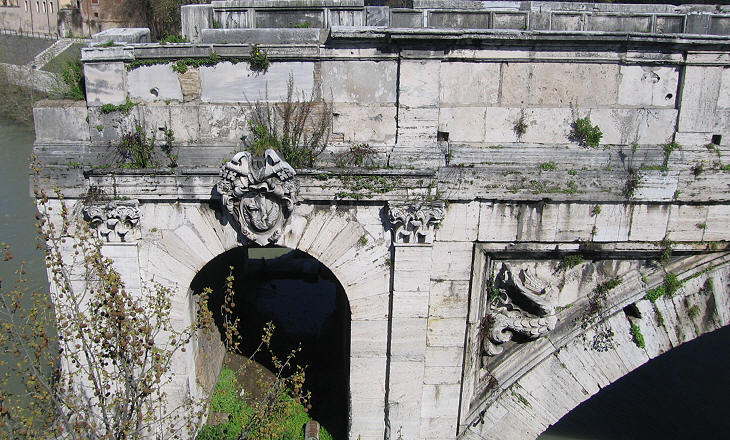 Vasi covered this bridge in more detail in a small etching.

See more images of Isola Tiberina when the level of the water grows.