S. Bartolomeo all'Isola
(Vasi at work in the Grand View of Rome) In the foreground of this 1754 etching Giuseppe Vasi showed a gentleman in the act of copying an ancient inscription; in the description Vasi explained that the stone was inside the Franciscan monastery. By using a magnifying glass it is possible to read the first words: Semoni Sanco Deo Fidius. The reason for Vasi's interest in this inscription lay in the belief that its content led St. Justin, a IInd century martyr, to conclude that a temple of Isola Tiberina was dedicated to Simon Magus, a Ist century sorcerer. The sin of simony, or paying for position and influence in the church, was named after him. Peter said unto him, Thy money perish with thee, because thou hast thought that the gift of God may be purchased with money (Act of the Apostles 8:20 - King James Version).
Semo Sancus was instead a deity of the Sabines and eventually of the Romans; in particular Semo Sancus was the god of oaths and it is thought that words like saint and sanction derive from Sancus.
The view is taken from the green dot in the small 1748 map here below. In the description below the plate Vasi made reference to: 1) Convento dei Padri Osservanti (Monastero Francescano); 2) Ponte Cestio; 3) Ponte Fabricio o Quattro Capi; 4) S. Gregorio a Ponte Quattro Capi; 5) Part of Rome. 2) and 3) are shown in detail in other pages. 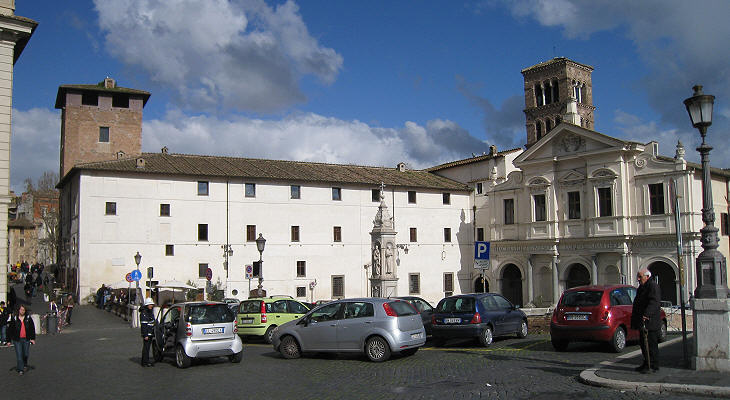 In 1867 the column in front of the church was hit by a carriage and it fell and broke into many pieces; two years later Pope Pius IX replaced it with a small monument to Sts. John of God, Francis, Bartholomew and Paulinus of Nola which was meant to celebrate the beginning of the First Vatican Council. The saints were chosen because of their links with buildings in this square.
In the 1880s the buildings to the right of S. Bartolomeo all'Isola were pulled down to enlarge the river bed and reduce the risk of floods. 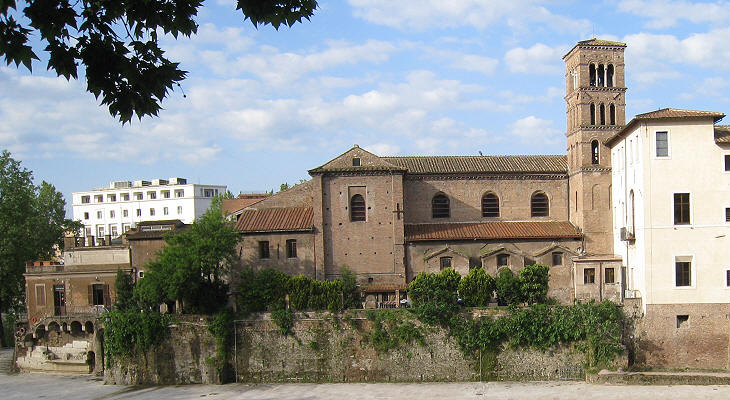 View of the eastern side of S. Bartolomeo all'Isola; to the far left the remaining travertine wall which gave the island the appearance of a ship

According to the traditional account in 293 BC a temple to Aesculapius/Asclepius, god of Medicine, was built on Isola Tiberina on the site where a sacred snake brought to Rome from the god's shrine at Epidaurus, hid itself; at that time the Romans were increasing their links with Greece and adding Greek gods to their own.
In the historical section of this website you can see a well of the ancient temple and a relief which most likely portrayed Asclepius (a detail is shown in the image used as background for this page).
In the 1880s a major effort to lower the river bed led to finding many small terracotta reproductions of parts of the human body. They were ex-votos and they came from the ancient temple (you may wish to see a collection of similar ex-votos which were found in Corinth). 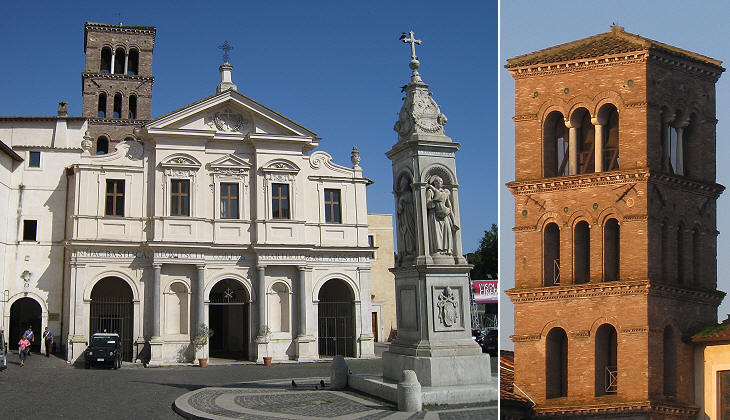 A church which made use of some structures of the temple was built in ca 1000 by Emperor Otto III to house an arm of St. Adalbert of Prague, his friend and adviser, who died while trying to convert the Baltic Prussians; the church was dedicated to St. Bartholomew and other martyrs.
The bell tower was built in ca 1113 and in the following century the façade was embellished with mosaics and the interior with a Cosmati pavement. 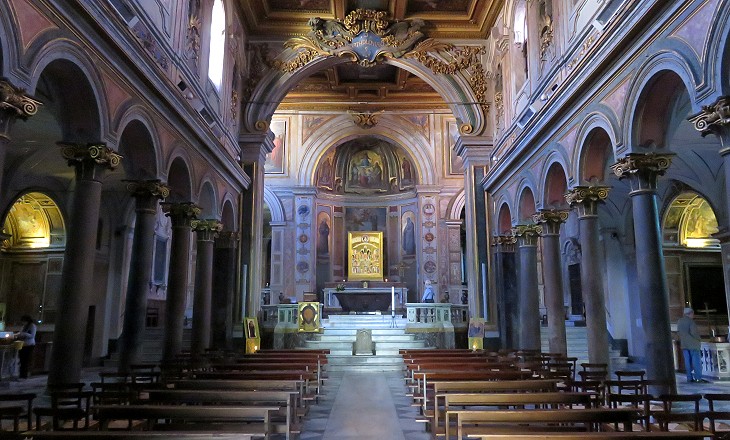 In 1557 a major flood destroyed one side of the church and its façade; for some time the building was abandoned and only in 1583 it was partially restored (you may wish to see it in a 1588 Guide to Rome). In 1624 S. Bartolomeo all'Isola was almost entirely rebuilt (perhaps by Martino Longhi the Elder) by order of Pope Urban VIII. The interior, including the ceiling, was partly redesigned in the XIXth century. 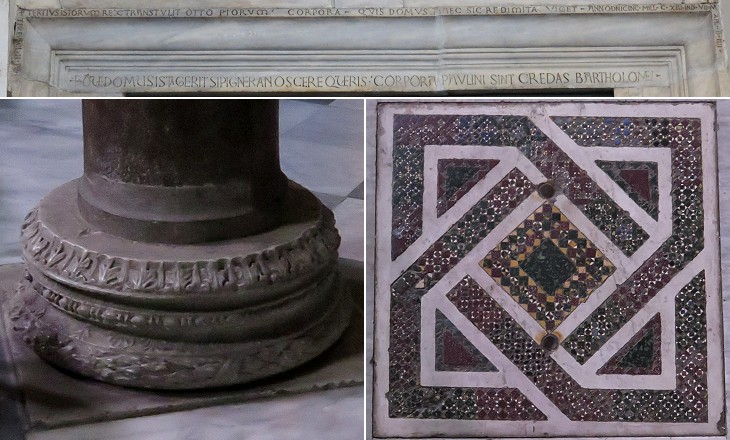 (above) 1113 inscription celebrating a restoration by Pope Paschal II (who restored also SS. Quattro Coronati and S. Lorenzo in Lucina) and making reference to the relics of St. Bartholomew and St. Paulinus of Nola; the latter was Bishop of Nola, near Naples, in the Vth century; in 1909 his relics were returned to Nola; (below-left) ancient plinth (base) of a column; (below-right) a small remaining section of the Cosmati pavement

Notwithstanding reconstructions and restorations the church retains some elements of its early days. The columns do not have their original capitals, but their shafts stand on ancient plinths, although there is a mismatch between the two. In the XVIIIth century most of the Cosmati pavement was removed, probably because it was damaged by floods. (above-left) An ancient capital in the oldest structures of the church; (above-right) medieval lion in the interior of the church; (below-left) 1626 inscription in the chapel of the millers' guild; (below-right) a French cannon ball which hit a chapel in 1849 during Garibaldi's defence of the Roman Republic In 1513 Pope Leo X assigned S. Bartolomeo all'Isola to the Franciscan Order. The monastery included some medieval buildings, but its interior was redesigned in the XVIIth century. For a certain period of time the meetings of a brotherhood were held in the monastery. The brotherhood (Confraternita dei Devoti di Gesù al Calvario) took care of burying the bodies of the drowned; its members were known as Sacconi Rossi after the large red robes they wore. Every year on All Souls' Day they went in procession to the tip of the island (opposite Ponte Rotto) where they threw a wreath into the river in memory of the drowned whose bodies were never found. 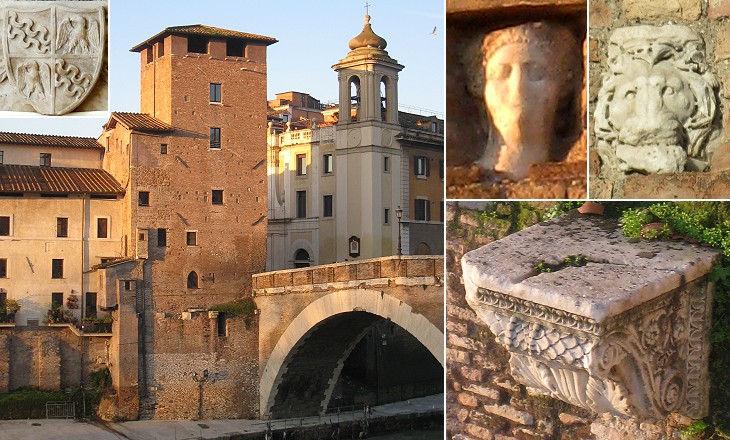 (left) Torre Caetani and inset showing the Caetani coat of arms inside the building (in the background S. Giovanni Calibita); (right) ancient reliefs and capitals on its side facing the river

The medieval tower shown above was part of a larger fortification system which for a period of time belonged to the Pierleoni, who controlled the passage through the island (see their nearby houses). It was acquired by the Caetani, the family of Pope Boniface VIII. In 1638 the tower became part of the monastery. 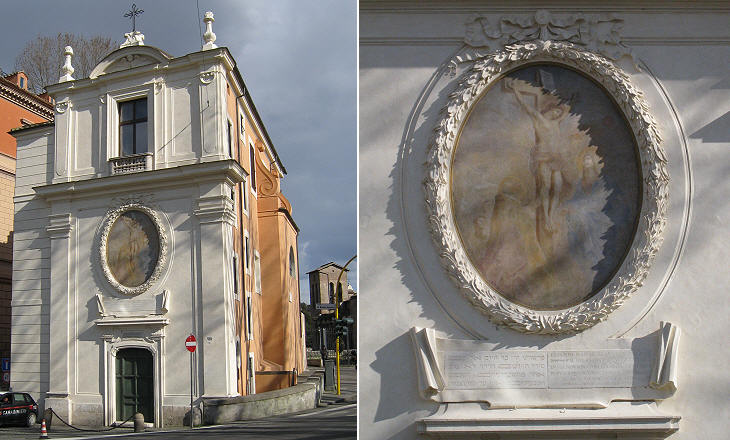 (left) Façade; (right) Crucifixion by Etienne Parrocel (1729), a painter who was involved in the decoration of S. Maria Maddalena

According to tradition a medieval church was built on the house were St. Gregory the Great was born; as a matter of fact the ancient walls which have been unearthed under the current building were part of Teatro di Marcello. In 1555 when Pope Paul IV forced the Jews to live inside the Ghetto, S. Gregorio a Ponte Quattro Capi acquired importance because it was located immediately outside the eastern gate of the Ghetto; on Sundays the Jews had to attend masses or to listen to sermons inside the church.
In the XVIIIth century the church was redesigned by Filippo Barigioni.
According to Luisa Scalabroni (Giuseppe Vasi 1710-1782 - Multigrafica Ed. - Roma 1981) Giuseppe Vasi was buried in S. Gregorio a Ponte Quattro Capi, although his son Mariano put his portrait and an inscription celebrating him in S. Caterina della Ruota.

Inscription quoting a sentence of Isaiah. Originally the inscription was painted, but in 1858 Pope Pius IX had it engraved

January 7th, 1645. A sermon was preached to the Jews, at Ponte Sisto, who are constrained to sit till the hour is done; but it is with so much malice in their countenances, spitting, humming, coughing, and motion, that it is almost impossible they should hear a word from the preacher. A conversion is very rare.
John Evelyn's Diary and Correspondence
The Jews are shut up here in a quarter by themselves. I see no reason for it. There was a talk (it being Anno Santo) of shutting them up for the whole of the present year. A soldier stands at the gate, to tell you that this is the Jews' quarter, and to take any thing you choose to give him for this piece of Christian information. A Catholic church stands outside their prison, with a Crucifixion painted on it as a frontispiece, where they are obliged to hear a sermon in behalf of the truth of the Christian religion every Good Friday. On the same day they used to make them run races in the Corso, for the amusement of the rabble (high and low) - now they are compelled to provide horses for the same purpose. Owing to the politeness of the age, they no longer burn them as of yore, and that is something.
William Hazlitt - Notes of a Journey Through France and Italy in 1824-1825
To this day, several times in the course of a year, a Jewish congregation is gathered together in the church of S. Angelo in Pescheria, and constrained to listen to a homily from a Dominican friar, to whom, unless his zeal have eaten up his good feelings and his good taste, the ceremony must be as painful as to his hearers. In the same spirit of vulgar persecution, there is upon the gable of a church, opposite one of the gates of the Ghetto, a fresco painting of the Crucifixion, and, underneath, an inscription in Hebrew and Latin, from the second and third verses of the sixty-fifth chapter of Isaiah: "I have spread out my hands all the day unto a rebellious people, which walketh in a way that was not good, after their own thoughts; a people that provoketh me to anger continually to my face."
George Stillman Hillard - Six Months in Italy in 1847-1848