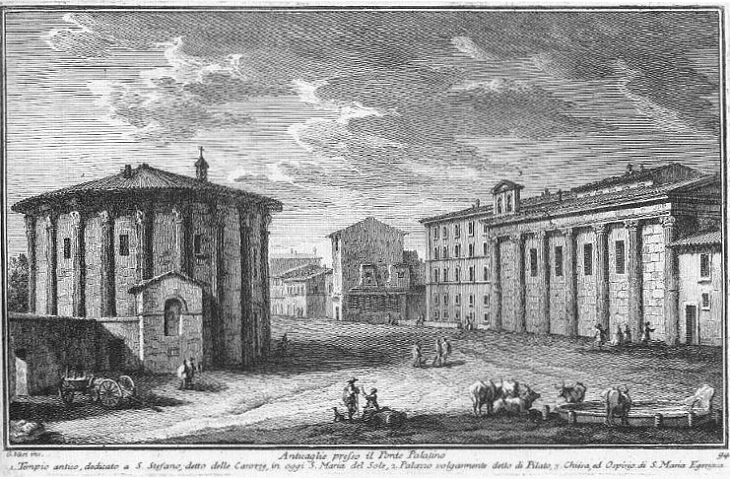 This 1754 etching by Giuseppe Vasi shows a charming corner of XVIIIth century Rome with two small ancient temples which were turned into churches, but retained most of their original design; Vasi showed the round temple also in the plates covering S. Maria in Cosmedin and the beach near that church. This view was most likely influenced by an earlier painting by Gaspar Van Wittel (it opens in another window). The temples appeared also in a 1761 etching by Giovan Battista Piranesi (it opens in another window), who however chose to depict them from a different angle.
The view is taken from the green dot in the small 1748 map here below. In the description below the plate Vasi made reference to: 1) Roman Temple which was turned into S. Maria del Sole; 2) Palazzo di Pilato; 3) S. Maria Egiziaca. 1) is shown in another page. 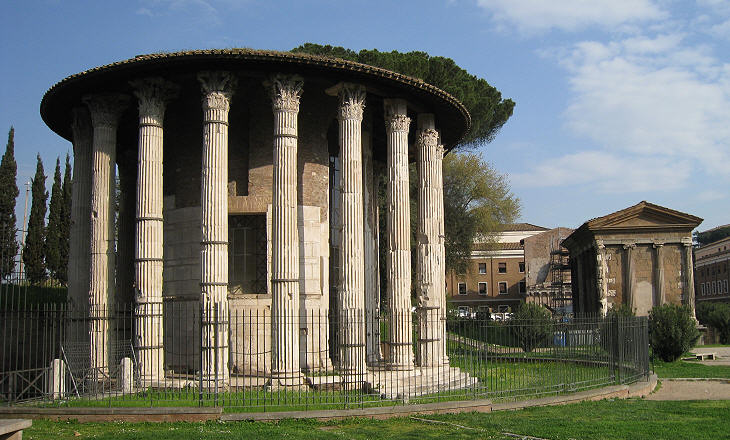 In 1926-1930 the neighbourhood between the Capitoline Hill and the River Tiber was the object of many demolitions which were aimed at isolating the ancient monuments and at opening Via del Mare, a new road linking the city centre with the southern part of Rome and eventually with Lido di Ostia, its modern beach. The two Roman temples were freed from the additions which turned them into churches and the level of the ground was lowered to unearth their podiums; the XVIIIth century watering trough shown in the plate was relocated to a garden along the river. 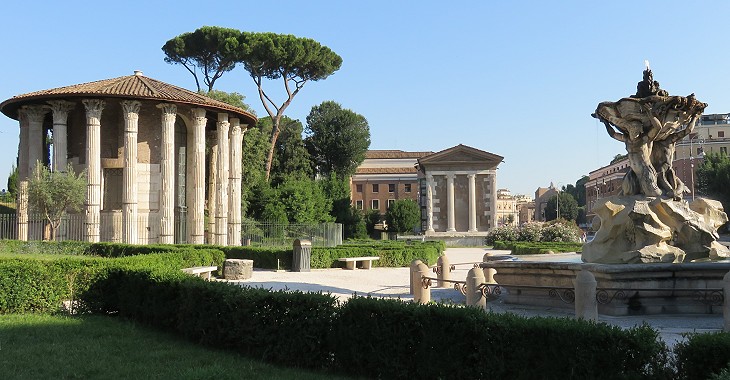 View with Fontana dei Tritoni and Via del Mare behind it 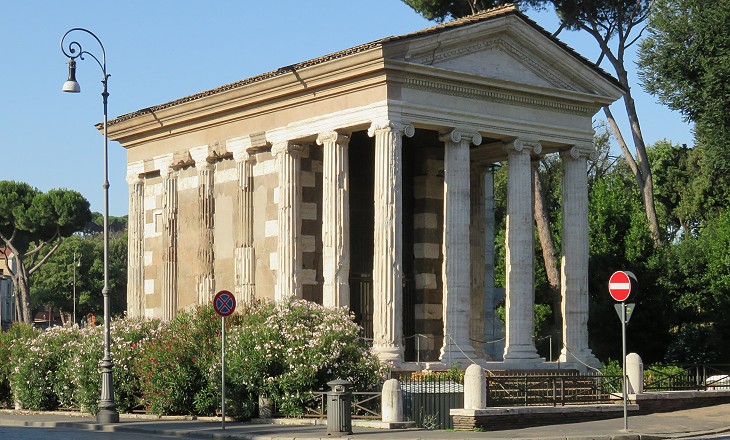 See also the many names given to the temple of Santa Maria Egiziaca. Some thought, it a chapel of Patrician Modesty, some a Basilica of Caius and Lucius, some a temple of Good Fortune, others of Manly Fortune. It is now come back to Modesty.
John Cam Hobhouse - Dissertations on the Ruins of Rome - 1818
Today the prevailing opinion says that the temple was dedicated to Portunus, the Roman god of doors and harbours, because the first river harbour of ancient Rome was located in this area which was known as Velabro.
The temple was built with blocks of tufo, while the columns were made of travertine; their shafts were covered with plaster and then fluted in order to imitate marble; it is a Ist century BC building, but beneath it archaeologists have found evidence of a much older temple.
Until the 1920s the temple was usually identified with one mentioned by Ovid where the goddess Fortuna Virilis was worshipped. The name can be roughly translated as "having luck with men".

Learn now
why ye give incense to Virile Fortune in the place
which reeks of warm water. All women strip when
they enter that place, and every blemish on the
naked body is plain to see; Virile Fortune under-
takes to conceal the blemish and to hide it from
the men, and this she does for the consideration of
a little incense. 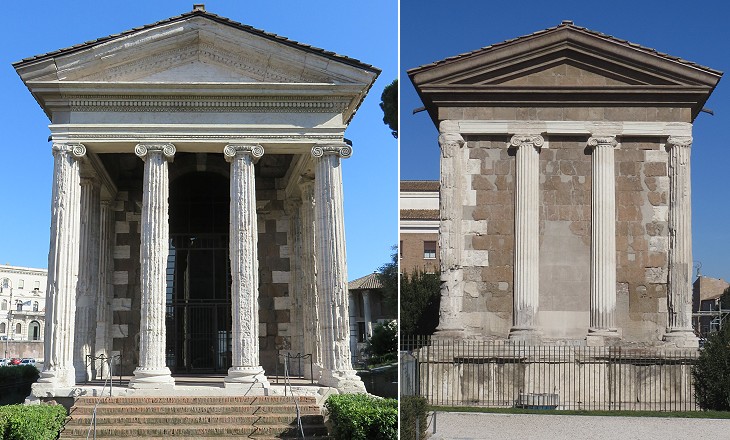 (left) Front view; (right) rear view (see the temple before it was cleaned - it opens in another window)

The next Church I came to was Santa Maria Egyptiaca. It was the Temple of the Sun and Jupiter. This Church is neatly adorned with curious chanelled Pillars. It belongs to the Armenians who have an Hospital also here, belonging to the Catholick Pilgrims of that Country: And the Pope allows them to celebrate Mass here after their own Armenian rite.
Richard Lassels' The Voyage of Italy, or a Compleat Journey through Italy in ca 1668
In 872 the temple was turned into a church dedicated to St. Mary of Egypt, a Vth century saint who lived as a hermit in the desert. In the XVIth century Pope Pius V assigned it to the Armenians of Rome who incorporated it into a hostel for pilgrims from their country. 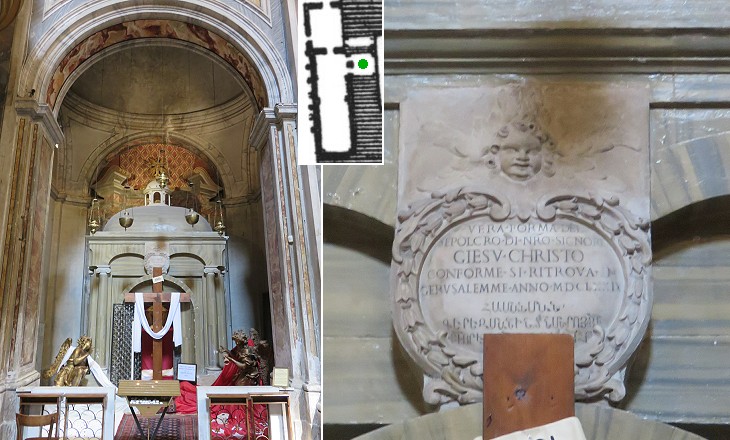 The old Sepulchre was burnt on the 12th of October 1808. The fire began at three in the morning and burnt till nine having destroyed the Armenian chapel where it began, the great dome, the Greek chapel, the cells of the Franciscans and the chapel of the Virgin and destroyed many of the fine columns and of the mosaick work contributed by Helena. The Sepulchre itself was not touched, but the Catholicks say that in the confusion the Greeks pulled down the chapel built over it that they might rebuild it and call it their own.
William Turner - Journal of a Tour in the Levant - 1820
Based on the inscription the Chapel of the Holy Sepulchre at Jerusalem had this aspect before being burned in 1808. Cappella del S. Sepolcro was relocated to S. Nicola da Tolentino after 1883, when this church was assigned to the Armenians in replacement for S. Maria Egiziaca. 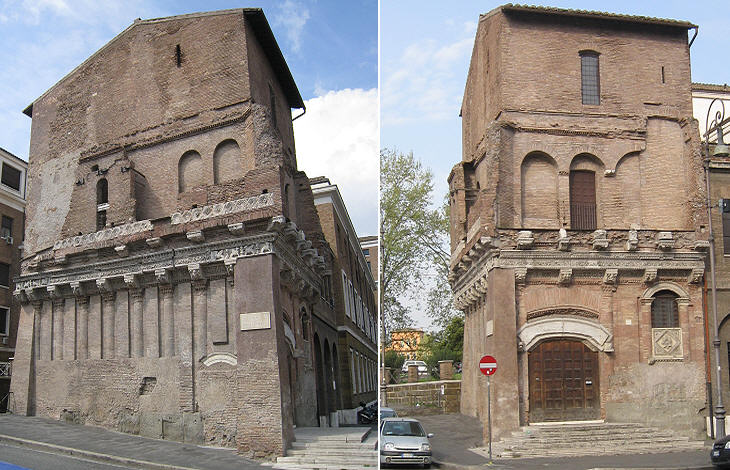 Side (left) and entrance (right) fronts

This interesting building is a medieval house of the Crescenzi family, most likely a tower commanding the river passage; the reference to Pontius Pilate could be due to the use of the house during medieval re-enactments of the Passion of Jesus; it was also known as Casa di Cola di Rienzo. According to a local tradition Pilate spent his last years at Vienne. 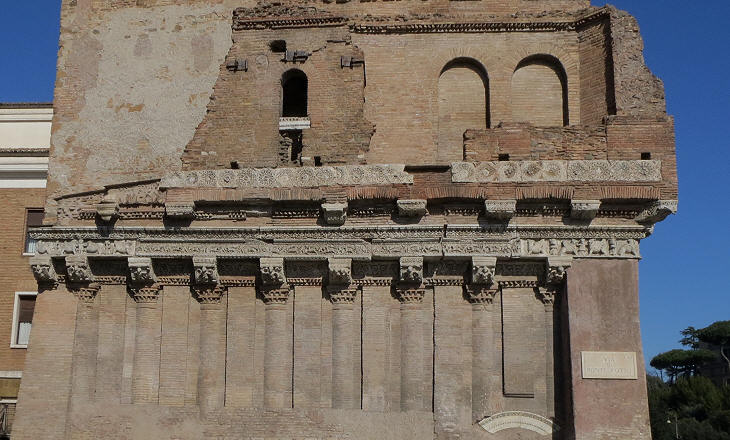 Overall view of the decoration of the side front (mainly late IIIrd, IVth and Vth centuries AD)

The house is built of brick, and disfigured with decoration, consisting of heterogeneous fragments of ancient marble sculpture and barbarous brick half-pillars and pilasters, thrown together without any regard to taste or architectural principle.
Rev. Jeremiah Donovan - Rome Ancient and Modern - 1844
The image used as background for this page shows a detail of an ancient ceiling which was used in the decoration of the side front. 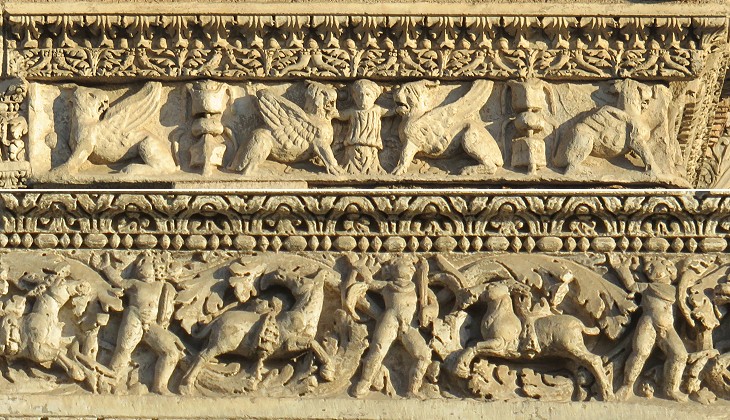 Two friezes of the side front

I can give an instance of a real appreciation of antiquities (in the Middle Ages). I speak of the picturesque mediaeval house in Rome near the temple of Fortuna Virilis and near the Ponte Rotto, miscalled sometimes the "house of Cola di Rienzo," sometimes "the house of Pilate." The building was erected, in fact, by Nicolaus Crescentius, son of the tribune Crescentius, and was built mostly of the fragments of ancient marble edifices and bas-reliefs, in order - as the inscription testifies - that his contemporaries might appreciate the artistic skill of their ancestors.
Rodolfo Lanciani - Ancient Rome in the light of recent discoveries - 1888 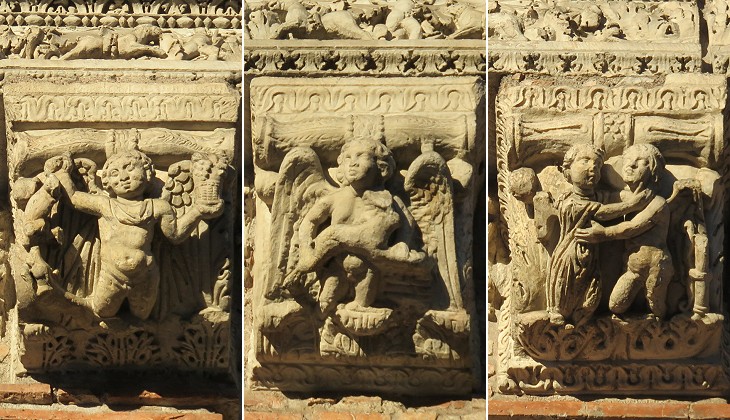 Three capitals of the entrance front: that to the right portrays Cupid and Psiche

Built with a collection of sculptured materials got from I know not whence, fragments covering a period between the fourth and the thirteenth, the Loggia, with a curious erection which they call the Casa di Rienzo, would furnish the frame for a long lecture in archaeology.
Francis Wey - Rome, its Churches, Monuments, Art, and Antiquities - 1903 English edition
Archaeologists have not been able to exactly identify all the ancient buildings from which capitals and friezes were taken. What is evident is that the Crescenzi assembled materials which best suited their desire to restore the ancient decorum of Rome, as stated in the long inscription above the entrance.