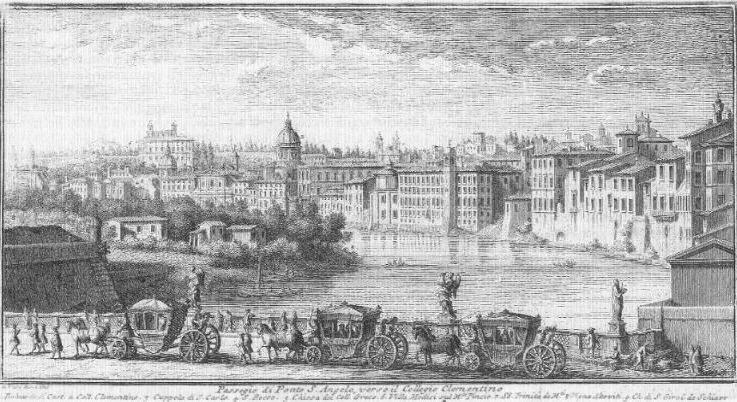 In the 1740s Giuseppe Vasi published Vedute di Roma sul Tevere, his first book of etchings which included fifteen views of the river; while in general the works by Vasi show a lot of attention to the design of the monuments of Rome, his early engravings are more similar to landscape paintings. In 1754 he used again a landscape format for some of the plates of Book 5 which covered the same subject. This etching is a very interesting picture of the houses and palaces along the river and of some Roman landmarks in the background, unfortunately Vasi did not provide information on the passengers of the three luxury coaches crossing the bridge.
The view is taken from the green dot in the small 1748 map here below. In the description below the plate Vasi made reference to: 1) Bastion of Castel Sant'Angelo; 2) Collegio Clementino; 3) Dome of S. Carlo al Corso; 4) S. Rocco; 5) S. Atanasio dei Greci; 6) Villa Medici; 7) SS. Trinità dei Monti; 8) Vigna Altoviti; 9) S. Girolamo agli Schiavoni. All but 8) are shown in detail in other pages. 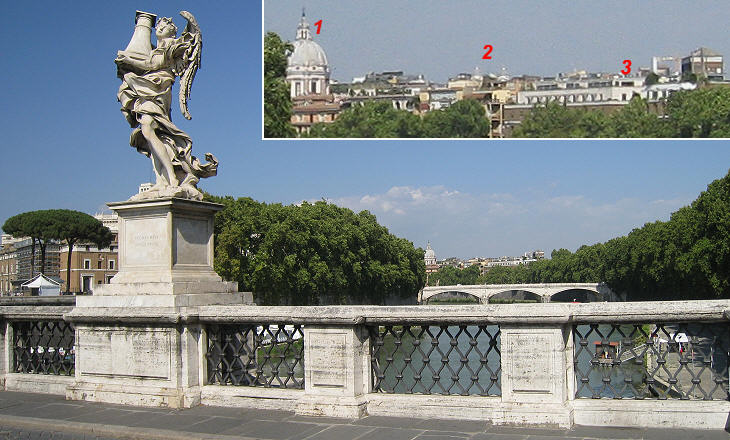 I will begin at the Bridge called now Ponte Angelo, and from thence take the whole Gyro of the City. (..) Here we saw the stately new decoration of Iron Work with the twelve Marble Statues set upon it by this present Pope Clement the Ninth.
Richard Lassels' The Voyage of Italy, or a Compleat Journey through Italy in ca 1668
On the left side of the view Vasi showed Villa Altoviti a farm/suburban residence in an area known as Prati (meadows) di Castello which was developed in the second half of the XIXth century and became Prati, a new "rione" of Rome. The Altoviti had a town palace near Ponte S. Angelo which was demolished in the 1880s. 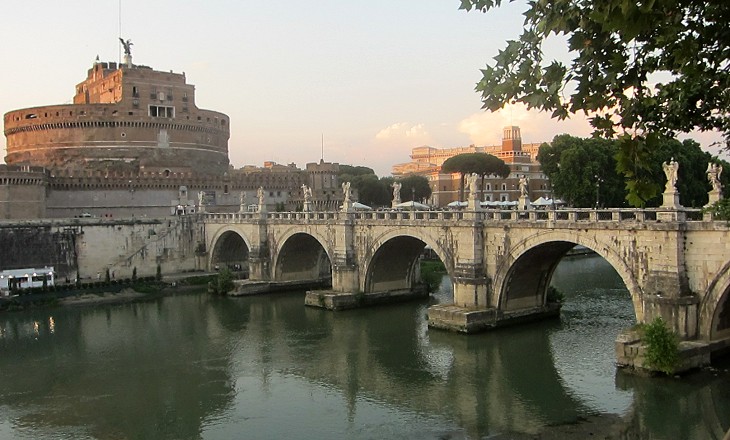 The bridge and Castel Sant'Angelo on the Feast of Sts. Peter and Paul, June 29 when La Girandola, a firework display is about to begin

In December 1870 Rome experienced a very damaging flood which prompted the Italian government to develop a comprehensive plan for preventing the reoccurrence of such events.
The river bed was drained and enlarged and high walls were built on the two sides of the river. Ponte S. Angelo was modified: the three central arches were not affected, but the lateral lower arches were redesigned: the plate shows that the statues of the angels were at a higher level than that of St. Paul at the beginning of the bridge; they are now at the same level. 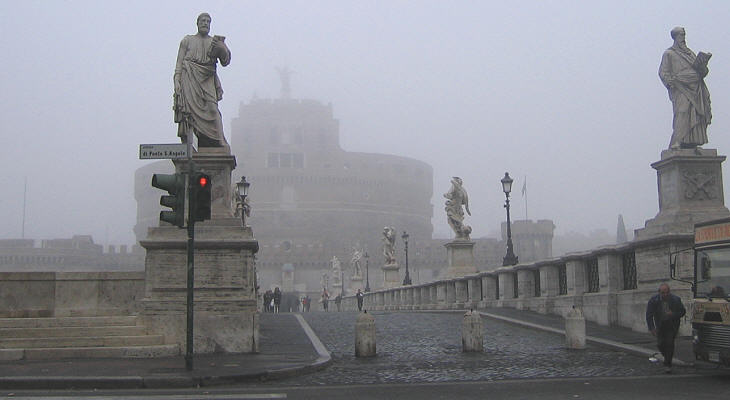 An unusual view of Ponte S. Angelo (a more traditional one in the next page or in the historical section or in a 1909 watercolour by Yoshio Markino)

Ponte S. Angelo was also known as Ponte Elio or Ponte Adriano after the names of Emperor Hadrian (Publius Aelius Adrianus) who built it. Most likely at that time the bridge was decorated with statues. It is shown by Vasi in another plate covering also Castel S. Angelo. (Upper row - left side of the bridge): St. Peter (school of Lorenzetto), the scourge (by Lazzaro Morelli), the crown of thorns (by Paolo Naldini from an original by Gian Lorenzo Bernini now in S. Andrea delle Fratte), the dice (by Naldini), I.N.R.I. - the derogatory inscription - (by Bernini and Giulio Cartari), the offer of vinegar (by Antonio Giorgetti); (lower row - right side of the bridge): St. Paul (school of Paolo Taccone), the throne (by Antonio Raggi), the poor vestment (by Cosimo Fancelli), the nails (by Girolamo Lucenti), the cross (by Ercole Ferrata), the lance (by Domenico Guidi)

The statues of St. Peter and St. Paul were erected by Pope Clement VII in 1534. In 1536, for the visit to Rome by Emperor Charles V, Pope Paul III had eight stucco statues placed along the bridge; they represented the four evangelists and four biblical patriarchs; they remained on the bridge for some time before being removed.
The idea of placing statues with instruments of the Passion, some of which were among the most important relics kept in S. Pietro, was discussed by Bernini with Pope Alexander VII, but the decision was taken by his successor Pope Clement IX: the first statue was placed on the bridge in September 1669, the last one in November 1671. Bernini coordinated a team of sculptors, many of whom were part of his inner circle; he provided them with sketches of the statues (you may wish to see a page on Baroque Angels).
The following inscriptions were written on the pedestals:

You may wish to see a page showing the statues of the angels in detail.
Bernini designed also a new balustrade for the bridge (you can see a detail of it in the image used as background for this page); his purpose was to allow the maximum view of the river because he believed that watching the flow of water is per se a delight.