- Monreale: Interior of the Cathedral
(left) Temple to Hercules at Agrigento; (right) detail of the apse of Palermo's Cathedral

You may wish to read an introduction to this section or a page on Monreale first. 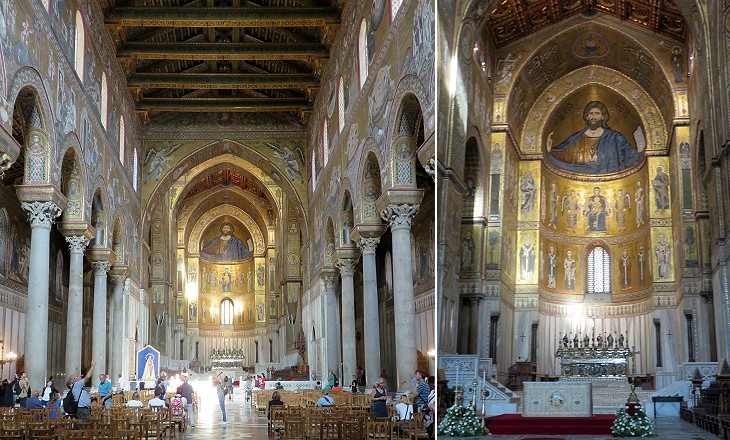 The interior is magnificent; the great span of the nave gives an air of spaciousness, and the treatment of the east end is superb. In the apse is a huge figure of Christ in mosaic, which dominates everything; marble lines the lower walls, and mosaic the rest. The wooden roofs are modern, replacing those that were burnt not long ago, of which I assume they are a copy. They are rich in gold and colour, and the effect is splendid. (..) The interior of Monreale, with its blaze of colour and interior gold, its rich marbles, its delicate sculpture, and its ample and spacious dimensions, has no rival.
Thomas Graham Jackson - Gothic architecture in France, England, and Italy - 1915 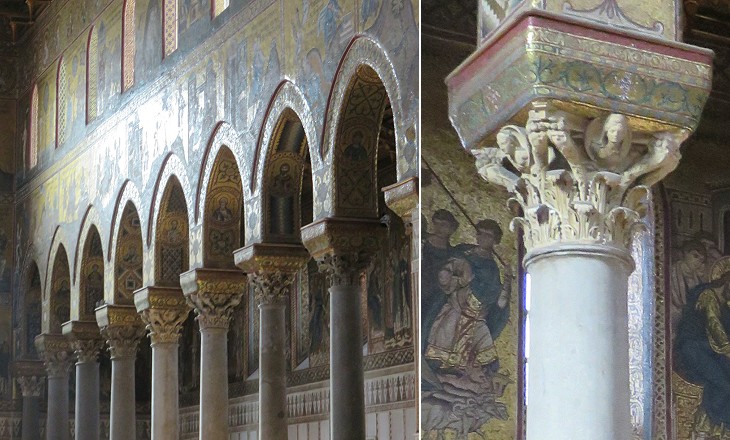 (left) Northern wall of the nave; (right) detail of a capital

This Edifice, which displays the best style of Norman architecture, not very long since suffered considerably from fire, but is now completely and judiciously repaired in a style corresponding with the rest of the Structure. Here are superb ancient Columns of Granite each of which has a Cornucopia and the Head of a Female Divinity in its Capital; here also are Columns of Porphyry and a profusion of Gothic Mosaics.
Mariana Starke - Travels in Europe for the Use of Travellers on the Continent and likewise in the Island of Sicily - 1838 Edition - based on a travel to Sicily made in 1834.
The interior being well lit, it is much better seen and enjoyed than the Capella Palatina (but that was before modern lighting). But this effect which now delights us was not the intention of the original architects. The Sicilian churches, says Professor Salinas (Director of the Archaeological Museum of Palermo in 1873-1914) were originally lighted dimly by windows filled either with sheets of lead pierced with small openings, or with traceries of plaster, at first tinglazed, and afterwards glazed with coloured glass. This lead-work was employed in the cathedrals of Monreale and Palermo, so that the scarcity of light might "strike a sacred horror". (..) The nave is eight bays long, with nine columns on a side, of which one to the right on entry is of cipollino and the rest are of granite. Some of the capitals are evidently Roman antiques misfitting the columns; but half of the number are rather puzzling. They consist of cornucopias forming volutes above acanthus leaves, and between the cornucopias is a disc with a classical female head. They are admirably carved, and yet so perfect and free from any sign of age or any mutilation that one can at first sight hardly accept them as antique. And yet it is impossible they can be works of the Renaissance, which is the only alternative, for such an introduction of new capitals would not have escaped the historian. One can only suppose that the columns were taken from some Roman building, and as the capitals fit them perfectly, they probably belonged to one another and were brought here together. This seems to be the opinion of the local archaeologists. All the arches are pointed and stilted, and spring from a pulvino (a piece in the form of a truncated pyramid, see those at Ravenna), which is encased in mosaic like the rest of the superstructure. No string-course or cornice of any kind breaks the smooth surface of the wall above, which is only divided by the bands of the mosaic patterns. There is a clerestory window over each arch, and the aisles are well lit by similar openings. T. G. Jackson 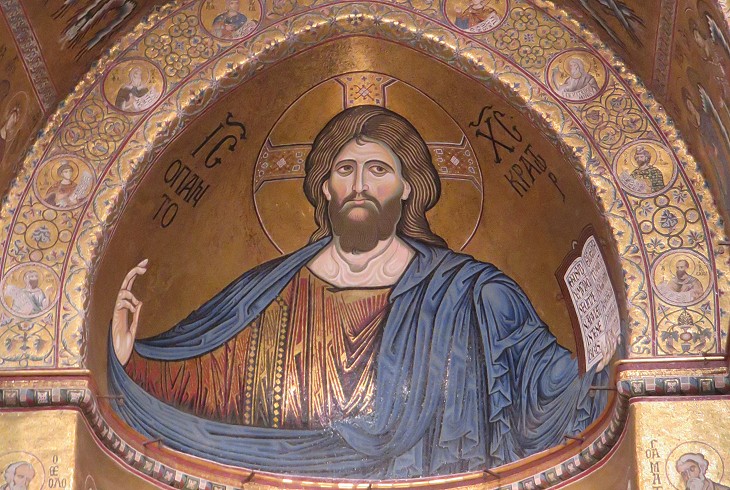 The great half-length figure of Christ in the pointed semi-dome of the apse resembles that at Cefalu, with the right hand in the same act of benediction, and a book in the left, inscribed with the same text in Latin and Greek. (..) No one, I think, can fail to see the superiority of the Christ at Cefalù to that at Monreale, which was obviously copied from it, and though a fine work, has not the expressive dignity of the original. T. G. Jackson 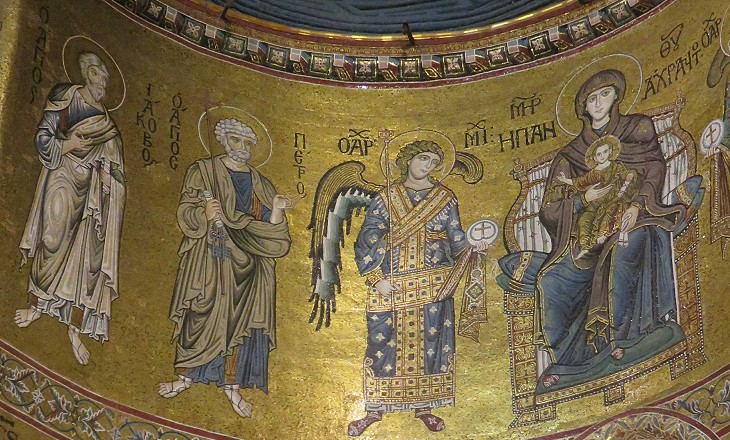 Mosaic showing St. James, St. Peter, St. Michael the Archangel and the Virgin Mary holding Jesus Christ. She is indicated by the letters MP OY (Mother of God) and by the title "Panagia" (All Holy). This word is used by Greeks to indicate a church dedicated to the Virgin Mary, e.g. Panagia Halkeon (St. Mary or Our Lady of the Smiths) at Thessalonica

There are only two zones of figures here in the drum of the apse, of which the upper one has a seated Madonna with the child Jesus in her lap, between two angels, beyond whom are figures of saints. T. G. Jackson
The inscriptions of the first mosaics to be completed were written in Greek which was the ceremonial language used by the Christians of Sicily during the Arab rule. The Roman Catholic and the Eastern Orthodox Churches split in 1054; at that time parts of southern Italy, especially those along the coasts, were under direct Byzantine rule (Catepanate of Italy with Bari in Apulia as capital). Nicodemus, Bishop of Palermo at the time of the Norman conquest was a Greek and was loyal to the Patriarch of Constantinople. The portrayal of St. Peter in a central position in the mosaic of the apse shows that the Norman kings promoted the acceptance of the primacy of the Popes. 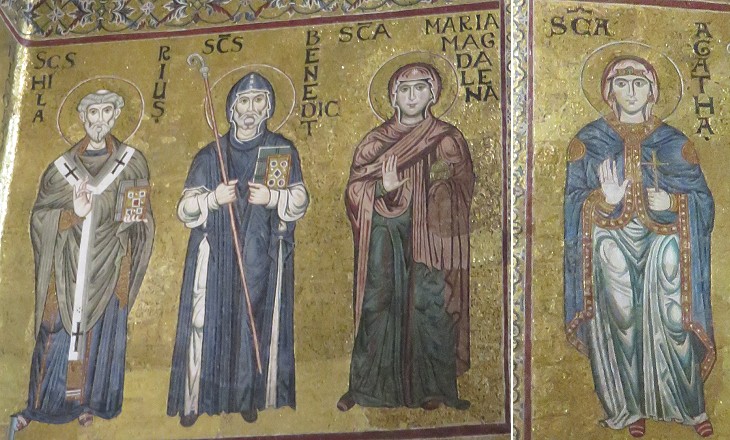 Sts. Hilarion, Benedict, Mary Magdalene and Agatha, patron saint of Catania, but also one of the patron saints of Palermo, prior to St. Rosalia. Their names are written in Latin

Splendid as is their general effect in the interior, the mosaics at Monreale, when carefully examined, will be found inferior in design to those we have described in the choir of the Palatine Chapel, at Cefalu, and at La Martorana. It is suggested that they were not the work of Greek artists, but of Sicilians who had learned from them. Most of the inscriptions are in Latin. (..) An extensive repair of the mosaics took place between 1811 and 1847. T. G. Jackson 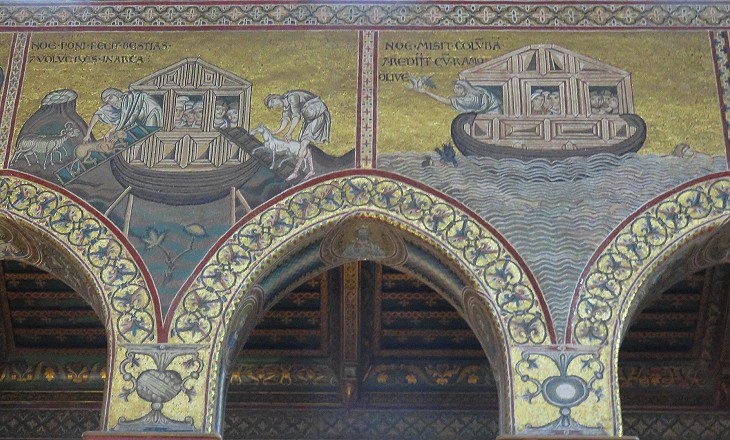 Mosaics depicting Noah and the Ark

It is widely believed that some of the mosaics were made by Byzantine craftsmen in ca 1180-1190. They were accustomed to decorating small domes and apses as at Christ Pantokrator, the largest XIIth century church in Constantinople and they had to adjust to the wide flat surfaces of the walls of the Cathedral. A few years later in 1204 the conquest of Constantinople by the Fourth Crusade led to the destruction of many churches, so perhaps those at Monreale can be regarded as the swansong of the Byzantine mosaic tradition. You may wish to see a XIIth century mosaic at Hagia Sophia. 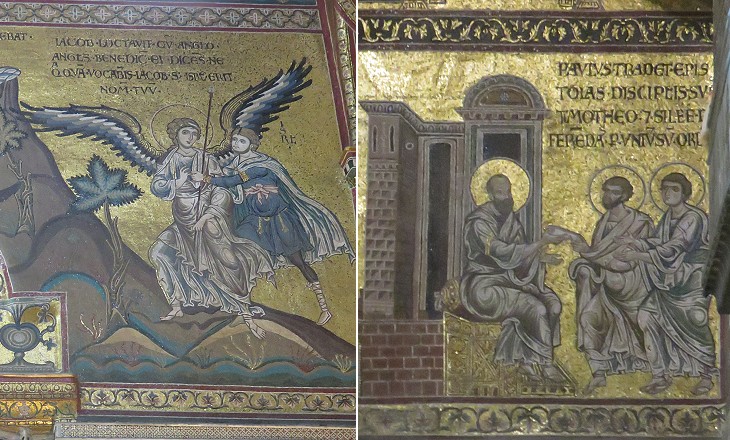 (left) Jacob wrestling with the Angel; (right) St. Paul handing over his epistles to Sts. Timothy and Silas

Among the mosaics appears the figure of the King offering his church to a seated Madonna. Two angels with outstretched arms float above, and the divine hand is extended in benediction. (..) Also in mosaic is a coronation of William II by Christ, who is enthroned with a book in his left hand, and by his right hand, is placing the crown on the King's head. T. G. Jackson
You can see these mosaics in the introductory page. 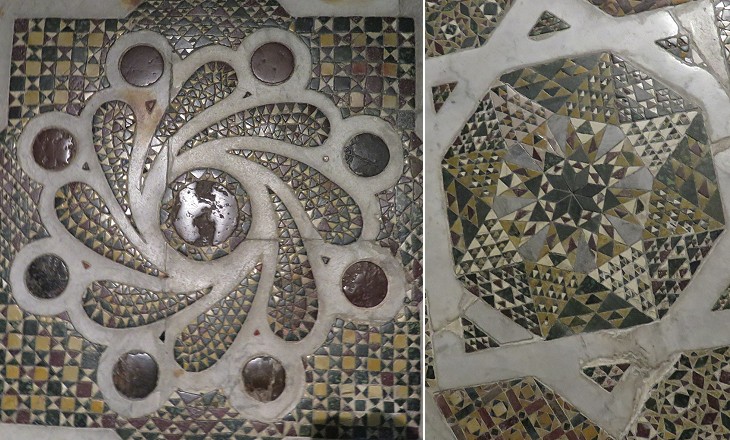 Details of the XIIth century floor. The image used as background for this page shows an Arabic-style marble inlay on the walls

The presbytery retains the original XIIth century floor. In Rome this type of marble inlays is known as Cosmati work with reference to the family of craftsmen who made use of them in the decoration of many churches of the city, e.g. S. Maria in Cosmedin. 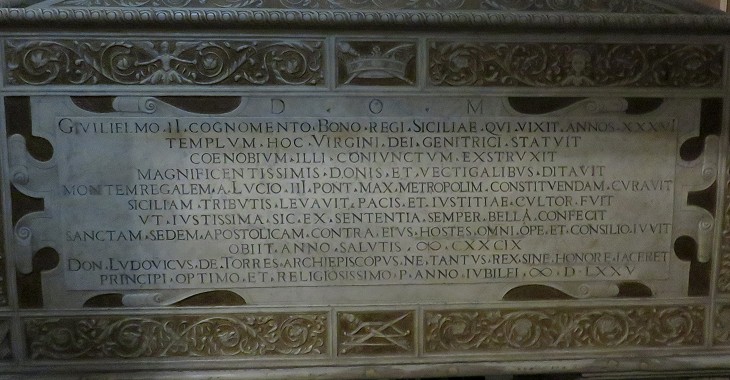 Over the archbishop's throne is the portrait of William the Good, who lies interred in a tomb at the feet of his father, William the Bad. The latter monarch is deposited in a monument of porphyry, exactly similar to those in the cathedral of Palermo.
Henry Swinburne - Travels in the Two Sicilies. 1777-1780
Monreale and Palermo are two distinct archiepiscopal sees although the two towns are only a few miles away. The Archbishop of Monreale could rely on the revenues of large estates. In the XVIth century it was a very sought after appointment. Cardinal Alessandro Farnese managed to be appointed Archbishop and he enjoyed the income of the archdiocese from 1536 to 1573. He was succeeded by two members of the de' Torres Spanish family by the same name (Ludovico). The second one was eventually created cardinal and he is known for having restored S. Pancrazio in Rome. 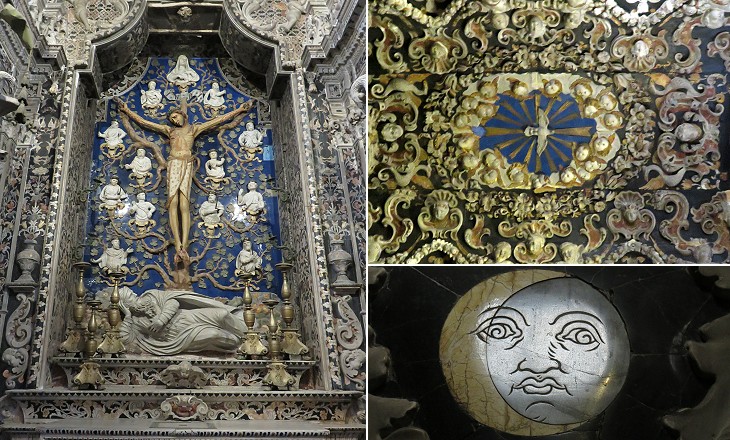 Cappella del Crocifisso or Roano: (left) The Jesse Tree (a not very common subject in Italian churches of the XVIIth century, you may wish to see it in a church at Kastoria in Greece) and a wooden Crucifix; (right) details of the decoration

In 1692 Archbishop Giovanni Roano felt that at least a corner of his Cathedral should be decorated in line with the fashion of his time. The religious purpose of the new chapel was that to properly house a wooden Crucifix which was assumed to have been donated to the church by King William II (today it is dated XVth century). The decoration is typical of contemporary churches of Palermo. It was based on marmi mischi (mixed marbles) as at SS. Salvatore. 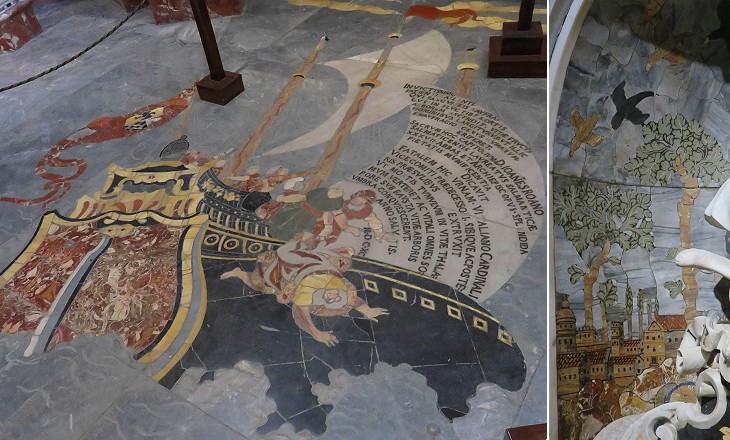 The long inscription on the sail explains why Jonah was regarded as a symbol of the Resurrection of Jesus Christ (he was very often portrayed in early Christian sarcophagi and mosaics). It then goes on to say that Archbishop Roano was buried underneath. The decoration of a tomb by a large floor marble inlay can be noticed also in some Roman churches of the same period e.g. Tomba Spinola at S. Andrea al Quirinale. 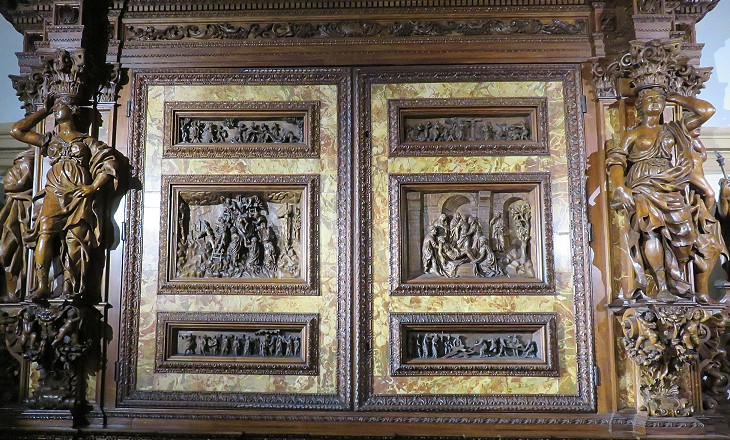 Cappella del Crocifisso or Roano: walnut cupboard in the sacristy with scenes depicting the Deposition and the Entombment of Jesus Christ