Links to this page can be found in Book 10, Map D3, Day 6 and Rione Trastevere. 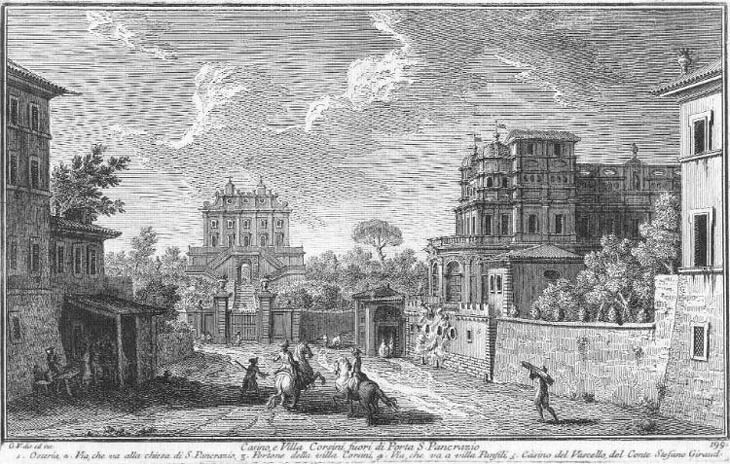 In a previous etching Giuseppe Vasi showed the gardens of Palazzo Corsini, the residence of Cardinal Neri Maria Corsini, nephew of Pope Clement XII; the Pope in turn was the nephew of Cardinal Neri Corsini who in 1662 bought a farm off Porta S. Pancrazio and commissioned Mattia De Rossi the design of a small casino on a commanding position. In this 1761 plate Vasi chose to give more relevance to Villa del Vascello, another casino built at almost the same time as the Corsini one and having the shape of a vessel.
The view is taken from the green dot in the small 1748 map here below. In the description below the plate Vasi made reference to: 1) Tavern; 2) Street leading to S. Pancrazio; 3) Entrance to Villa Corsini; 4) Street leading to Villa Pamphilj; 5) Casino del Vascello. The small map shows also: 6) S. Pancrazio; 7) Casino Corsini. 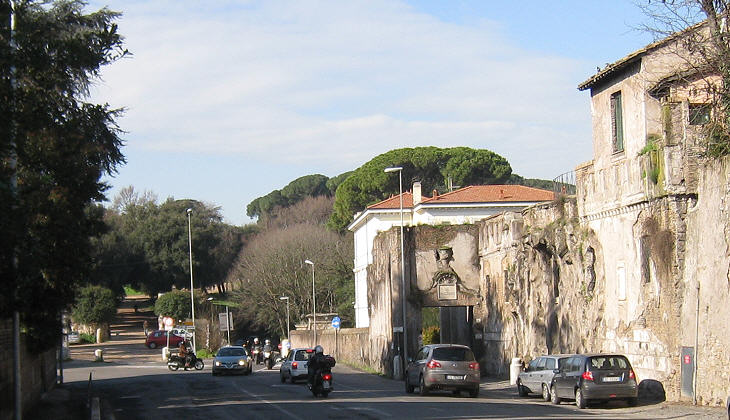 In 1849 fierce fighting between French troops and defenders of the Roman Republic heavily damaged the two casinos; you may wish to learn more about these events by reading excerpts from George Macaulay Trevelyan's "Garibaldi's Defence of the Roman Republic".
The road, the initial section of Via Aurelia, today is extremely busy because it links the historical part of the city with its highly populated modern western suburbs.

The ruins of a villa restored in the manner of a triumphal arch furnish an approach at present to groves of oak, of planes, of great spreading pines.(..) Under the cool freshness of the waters and the tall trees, the grass gets a fineness and brightness which recall the Alps; in the dawn of spring, the anemones, violets, periwinkles, primroses, and cyclamen display their mosaic on the turf.
Francis Wey - Rome - 1903 English edition.
When the Corsini completed the design of the gardens behind their palace at Via della Lungara they lost interest in their villa off Porta S. Pancrazio and the land surrounding the casino was mainly used for farming; the casino, because of its isolated position on high ground was called dei Quattro Venti (of the Four Winds); its main characteristic was to be built on a terrace with a central arched passage which allowed carriages to reach the rear side of the property.
The ruined casino was bought by the Doria Pamphilj, whose villa bordered on the Corsini one; in 1859 Andrea Busiri Vici designed a triumphal arch which brought to mind the previous building. 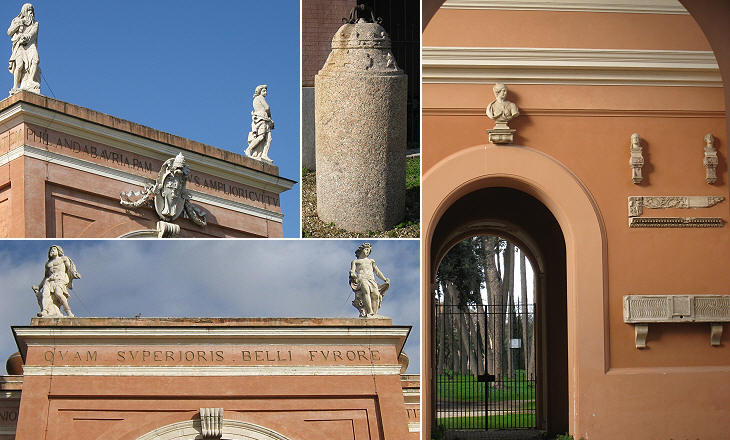 Various details of the arch showing the statues of Four Winds and a small collection of ancient reliefs/busts; the small pillar is decorated with the heraldic symbols of the Aldobrandini (the properties of this family were inherited by the Pamphilj)

The arch was decorated with four statues representing the winds and with a coat of arms of Pope Innocent X, to whom the Doria Pamphilj owed much of their wealth. A long inscription makes reference to war destructions (BELLI FURORE) and to Prince Filippo Andrea V Doria Pamphilj (PHIL. AND. AB AURIA PAMPHILUS), a keen supporter of the Papal cause, who nevertheless, after the annexation of Rome, was appointed Senator of the Kingdom of Italy and temporary Mayor of the City.
Some decorative elements were moved from Villa Pamphilj to the site of former Villa Corsini and viceversa. 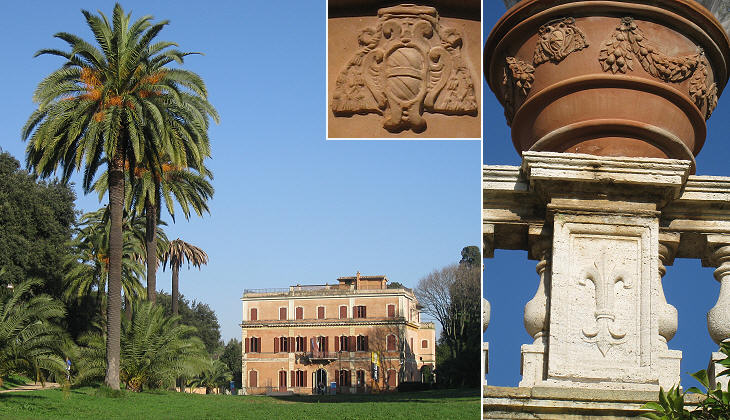 (left) Ancillary building of Villa Corsini; (right and inset) a vase at Villa Pamphilj with the coat of arms of a Corsini Cardinal

Today the building houses a local public library and its interior does not retain clear evidence of its former use. Its opposite side stands on Via Aurelia Antica and from the upper floor one can see a small section of Villa Abamelek, an XVIIIth century building which was almost destroyed by the 1849 events. In 1907 it was bought by Semion Semionovich Abamelek Lazarev, a Russian prince. In 1936 it was acquired by the Soviet Union and eventually by the Russian Federation. Villa Abamelek: a glimpse of a staircase with a fountain and of a mask 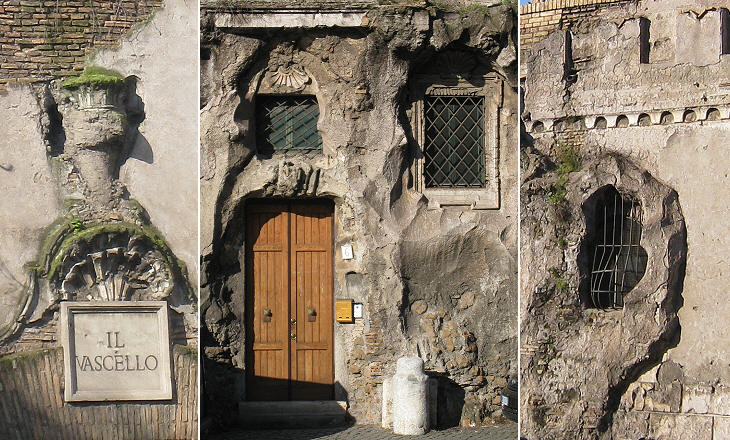 Details of the remaining part of Villa del Vascello

Plautilla Bricci (1616-1690) is one of the earliest examples of women architects; her father Giovanni was a musician and a painter and her brother Basilio was a painter and an architect and these circumstances allowed Plautilla to receive what at that time was regarded as an unconventional education for a woman. She and her brother were commissioned to design a villa for Monsignor Elpidio Benedetti, a close friend of Cardinal Jules Mazarin (the casino was decorated with a coat of arms of King Louis XIV of France). Because of its overall shape it became known as Villa del Vascello, rather than Villa Benedetti or Villa Giraud (the owners at the time of the etching by Vasi); the resemblance to a ship had a symbolic meaning, because a ship represents the Church.
Plautilla Bricci was influenced or perhaps even advised by Gian Lorenzo Bernini in the use of fake rocks as an architectonic element. She designed also a chapel at S. Luigi dei Francesi. 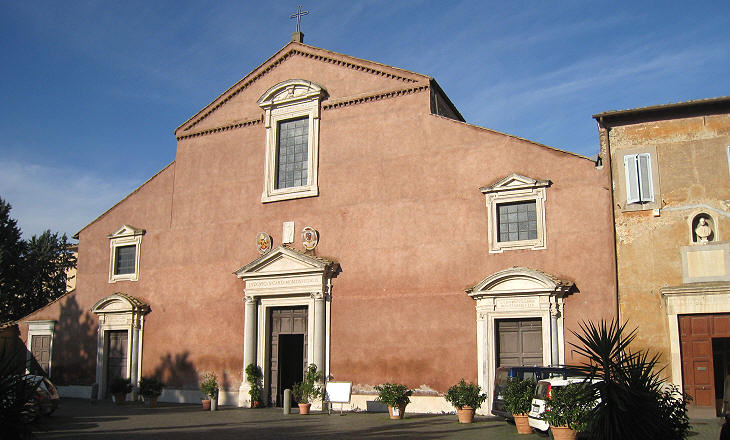 The basilica was built in the VIIth century on the site of an oratory housing the tomb of St. Pancras, a very young martyr who was executed at the time of Emperor Diocletian. The area, outside the walls of the city, was a burial ground; catacombs have been found near the church and a necropolis in the Pamphilj estate. 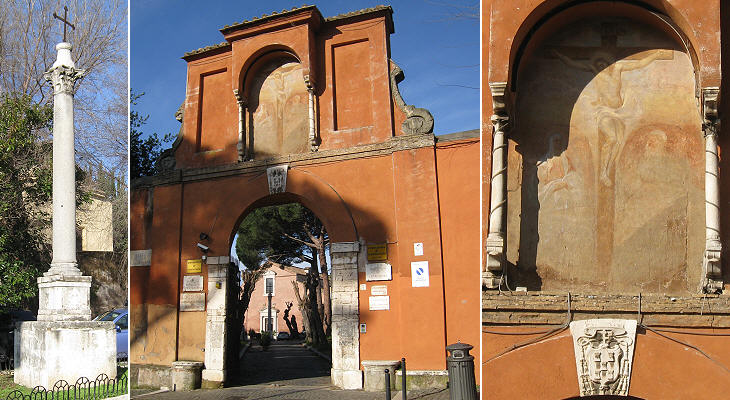 Unlike the other early Christian churches S. Pancrazio does not have a porch or a courtyard before the entrance; however it is located at a short distance from Via Vitellia, a minor ancient road, and it is likely that the area between the first entrance and the building had the function of a narthex, the part of a church which was screened off from the rest of the building and where catechumens attended ceremonies. (left) Modern painting on a wall showing a lost ambo (oblong pulpit); (right) detail of the wooden ceiling with the Torres coat of arms

In the XIIIth century S. Pancrazio was embellished with ambos having a Cosmati decoration similar to that at S. Lorenzo fuori le Mura; unfortunately during the 1849 fights, they were greatly damaged and today they are remembered by a painting on the wall.
In the early XVIIth century the church was renovated by Cardinals Ludovico and Cosimo de Torres (the former was the uncle of the latter); they were both Archbishops of Monreale in Sicily and they were both titular cardinals of S. Pancrazio; their heraldic symbol was a tower which can be seen at various locations in the church and its facilities (and also in the image used as background for this page). They had a palace at Piazza Navona and a Torres was the Abbess of S. Ambrogio alla Massima. You may wish to see the church in a 1588 Guide to Rome. 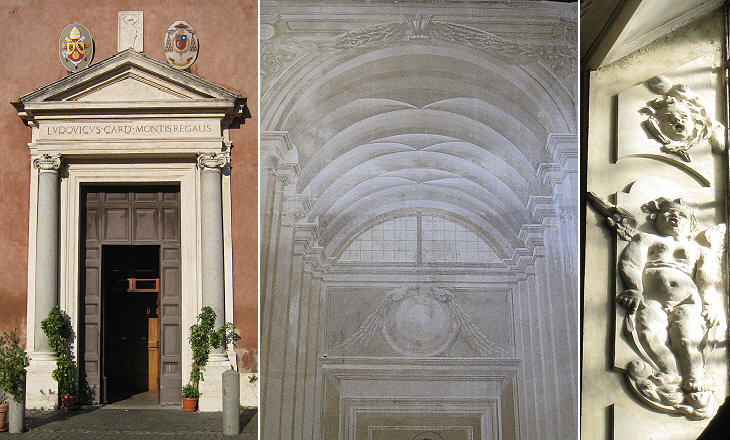