This is the first of two etchings that Giuseppe Vasi dedicated to Isola Tiberina in 1754. In this one the small islet is shown from the west. In plate 93 it is shown from the east. In addition Vasi showed its access from Rome (plate 173) and S. Bartolomeo all'Isola, its main church (plate 92). The left side of the plate shows the houses of the Jewish Ghetto which stood right on the edge of the river. The rather tall buildings were due to the overcrowding of the neighbourhood, similar to what occurred at the Ghetto of Venice.
The view is taken from the green dot in the small 1748 map here below. In the description below the plate Vasi made reference to: 1) Jewish Ghetto; 2) Ponte Fabricio; 3) Ponte Cestio; 4) Mole da grano (mill); 5) Ancient walls on Isola Tiberina; 6) S. Maria in Cosmedin. 1), 2) and 6) are shown in detail in other pages. The map shows also 7) Palazzo Mattei di Trastevere; 8) Via dell'Atleta; 9) S. Andrea dei Vascellari; 10) Palazzo Castellani. 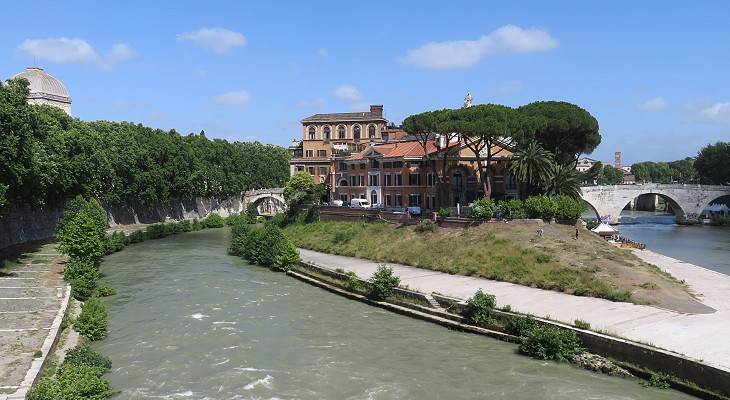 The view from Ponte Garibaldi in June 2016

In the 1880s the Italian government took major steps to prevent the River Tiber from flooding large sections of Rome. High walls were built on the river banks and this led to pulling down the houses of the Ghetto. The river bed was deepened to ease the flow of the water and Ponte Cestio was modified by greatly enlarging its side arches for the same reason. The western end of Isola Tiberina was redesigned and new wards of Spedale di S. Giovanni di Dio were built on it in the 1930s. 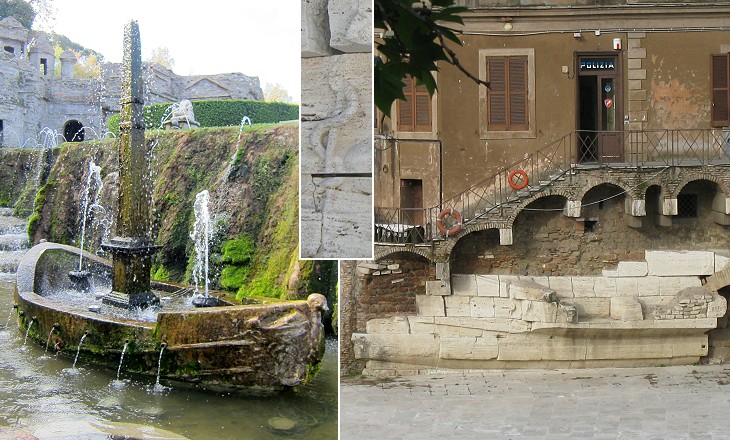 (left) A representation of Isola Tiberina at Villa d'Este in Tivoli (also in the image used as background for this page); (right) the remaining blocks of travertine which gave the island the shape of a ship; (inset) relief on one of the blocks showing a serpent-entwined rod, the symbol of Asclepius, Greek god of Medicine to whom the island was consecrated (see the whole relief)

Isola Tiberina resembles a ship ready to leave, but restrained by the two bridges. The form of the ship was very much emphasized in the Ist century BC by building an external travertine wall and by erecting at the centre of the small island an obelisk as a sort of mast (fragments of which are in museums in Naples, Paris and Munich). A small section of the travertine wall still remains at the eastern tip of the island (the plate by Vasi shows it also at the western one).

There are days in which one fears that the disastrous floods of the past could occur again.

The seventh bridge (of Ancient Rome) of a Church neere it is called di S. Bartolomeo, and it is opposite to the fifth bridge, and joineth the Iland with that part of Rome called Trastevere, and of old it was called Esquilinus, and Cestius, and it is sixty foot long, having but one Arch of stone.
Fynes Moryson - An Itinerary: Containing His Ten Years Travel Through .. Italy (in 1594)
Ponte Cestio was built in 46 BC by Lucius Cestius or perhaps by Caius Cestius who is best known for his pyramidal tomb. Its construction followed that of Ponte Fabricio in 62 BC and it most likely replaced a previous bridge. In 370 AD it was almost entirely rebuilt by Emperors Valens, Valentinian I and his son Gratian. The bridge was often referred to as Ponte Graziano and eventually as Ponte di S. Bartolomeo with reference to the nearby church. 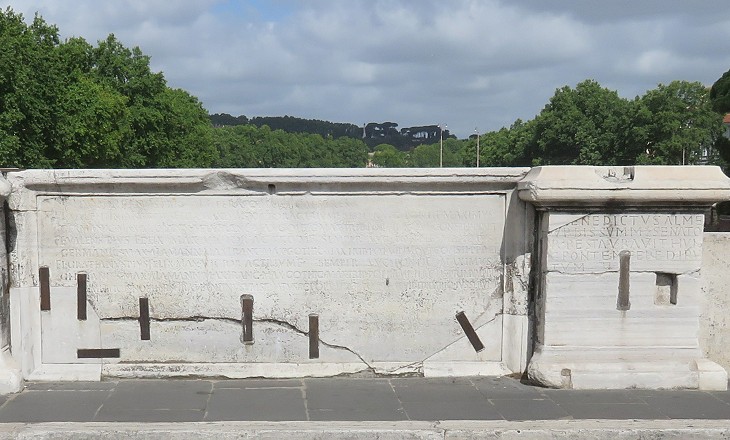 A large inscription of 370 AD celebrates the three emperors and their victories over the Germans, the Alamanni (Germanic tribes of the Upper Rhine Valley), the Franks and the Goths; this long list is by itself an indication of the growing difficulties the Roman Empire was experiencing on its Rhine/Danube border. The quality of the inscription is poor when compared to other Roman inscriptions and it is barely readable.

Next to it a smaller inscription celebrates a restoration of the bridge by Senator Benedetto Carushomo in 1192. It is a sign of the power achieved by the municipality of Rome towards the end of the XIIth century. Senator was the title given to the head of the city government. Carushomo was overthrown after just two years in office.

The inscription attempts to imitate that of the emperors, but actually it shows a dramatic loss of skill. Words are split into two lines and they are not centrally aligned, a typical feature of ancient inscriptions. 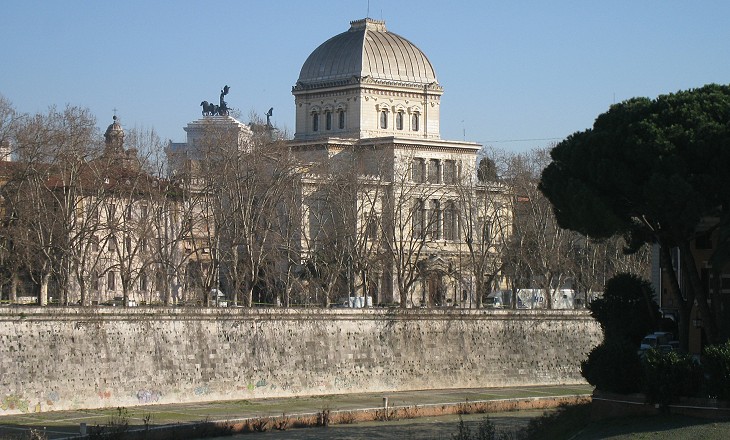 No sooner was I over this Bridge, but I saw on my left hand, the great back door of the Jewry; for here the Jews live altogether in a Corner of the Town, and are locked up every night. I entred into their Synagogues here (which they call their Schools) where they meet upon Saturdays and sing and pray.
Richard Lassels' The Voyage of Italy, or a Compleat Journey through Italy in ca 1668
At this moment there are nearly four thousand of them crowded together in this twisted knot of streets, where of sun and air they have not enough, and of water only too much; being always the first and greatest sufferers in those frequent inundations by which the Tiber vindicates its old reputation for turbulence and insubordination.
George Stillman Hillard - Six Months in Italy in 1847-1848
After the annexation of Rome to the Kingdom of Italy in 1870, the Jews were no longer forced to live in the Ghetto. The neighbourhood was very unhealthy. This factor together with the construction of the walls along the river led to the decision to raze it to the ground.
The Jews of the Ghetto prayed at Cinque Scole, five rabbinical schools/synagogues all inside one building, because papal authorities did not allow them to have more than one place of worship. The synagogue which had a direct access from the street was Scola Tempio which was reserved to the Jews of ancient Roman origin. The other four synagogues were reached through narrow passages. Their ceremonies were attended by the Jews who came to Rome from Spain and Sicily in 1492 (Scola Catalana, Scola Castigliana and Scola Siciliana) and from minor towns of the Papal State in 1555 (Scola Nova).
A new large building which in addition to the worship hall houses the offices of the Jewish Community was inaugurated in 1904 and it replaced Cinque Scole. 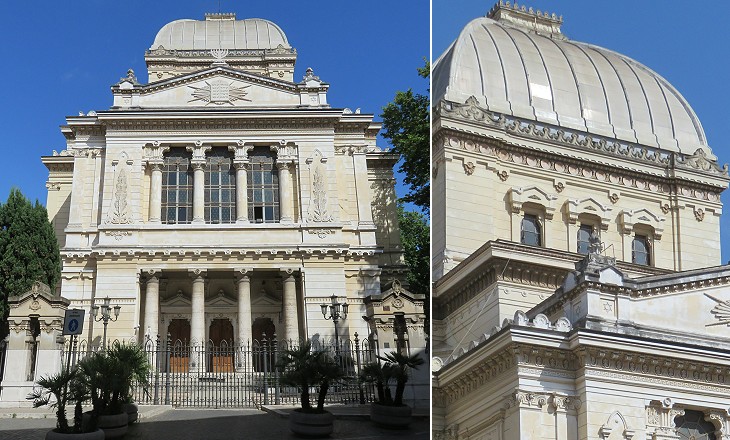 Tempio Maggiore was designed by Osvaldo Armanni and Vincenzo Costa in what was defined as Assyrian-Babylonian style. It rather reflected the eclectic architecture of the time. The square dome was meant to distinguish the synagogue from the many circular domes of the churches. Owing to its size and position in a central area it has become a landmark of Rome.
The building houses an interesting museum with some of the works of art which embellished Cinque Scole.

Via dell'Atleta and a Walk through Ripa Romea 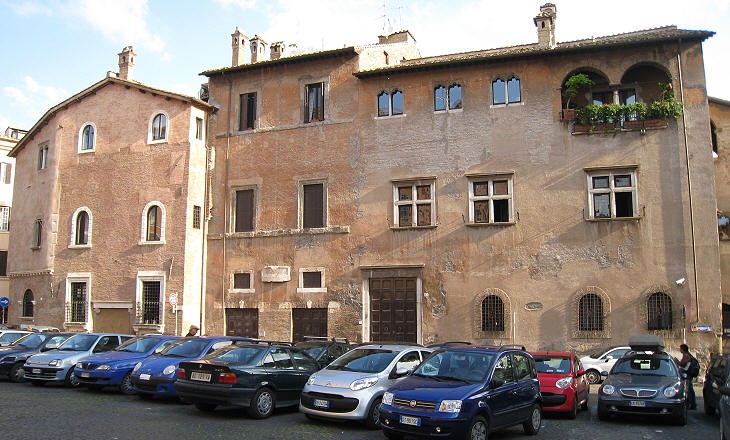 The Mattei are a family whose origin is dated XIIIth century. A branch of this family built a group of palaces in Rione Sant'Angelo on the other side of the river, not far from the Jewish Ghetto, while another branch lived in a group of houses in Trastevere opposite S. Benedetto in Piscinula.
In the XVIIIth century the property was split and eventually in 1870 a part of the building housed a miserable inn. In 1926-1927 new landlords carried out a major restoration which was aimed at emphasizing the medieval/Renaissance aspect of the complex of houses. The result is rather patchy. 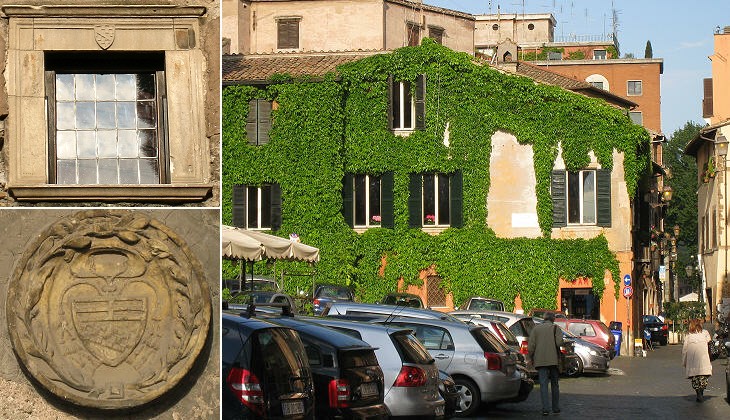 (left-above) Window with the Mattei coat of arms at Palazzo Mattei; (left-below) coat of arms of a Cardinal Cybo, the family of Pope Innocent VIII on the walls of Palazzo Mattei; (right) a house covered with ivy in Piazza in Piscinula; the street (Via della Lungarina) leads to S. Grisogono

This part of Trastevere is not as popular and crowded as the area near S. Maria in Trastevere, but its houses covered with ivy and other creeping plants appeal more and more to the rich who look for a quiet place in the centre of Rome. 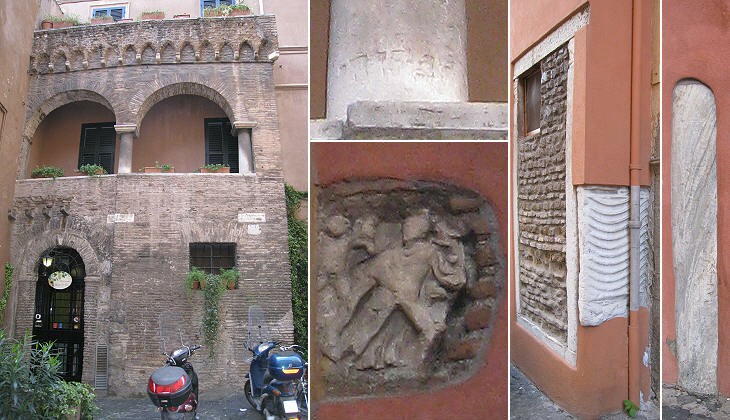 Via dell'Atleta: (left) the medieval building which housed a synagogue; (centre-above) detail of the inscription on one of its columns; the other images show a relief, the piece of a sarcophagus and an ancient column which were placed on the walls of medieval houses

In the Middle Ages this neighbourhood was known as Ripa Romea which meant Pilgrims' Bank because Romeo stands for pilgrim going to Rome and Ripa for river bank. The ancient river harbour of Rome was situated near Monte Testaccio on the left bank. For the reduced population of medieval Rome the old harbour was too remote and in the XIth century ships coming from the sea began unloading their goods on the right bank (i.e. Trastevere) near Isola Tiberina.
Ripa Romea was mainly populated by seamen, pilgrims, merchants and by the Roman Jews, whose synagogue (with a fine loggia) was in a little alley. In the XVth century proper harbour facilities began to be built at Ripa Grande, downstream of this neighbourhood, still on the right bank. 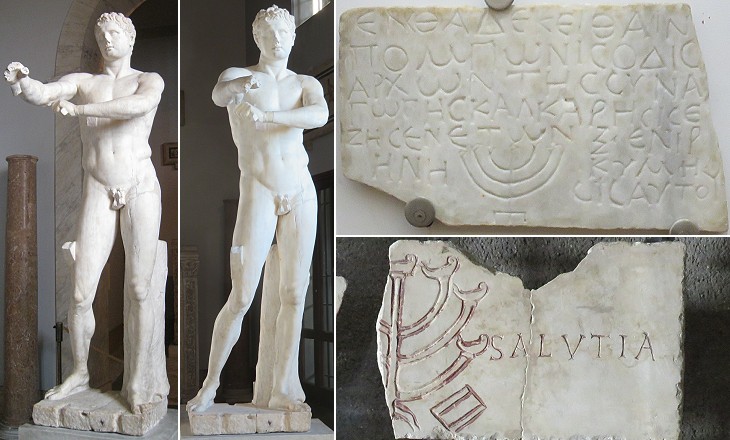 To mention only those discoveries which have taken place in my lifetime, I will name first of all the treasure-trove of the Vicolo delle Palme in Trastevere. In 1844 (..) under the house No. 17 in the above-mentioned passage, a most remarkable collection of works of art was discovered by mere accident. It included the Apoxyomenos of Lysippus, now in the Braccio Nuovo, - a marble copy from the bronze original, which stood in front of the baths of Agrippa. (..) Here we have the evidence of a collection of works in metal, stolen from different places, and concealed in that remote corner of Trastevere, in readiness for shipment from the quay of the Tiber, close by. Whether the deed was accomplished by a barbarian of the hordes of Genseric, who entered and left Rome precisely at this quarter, or by a Jew of the transtiberine community, the fact is that the treasure was never removed from its hiding-place until its accidental discovery in 1849.
Rodolfo Lanciani - Ancient Rome in the light of recent discoveries - 1888
The narrow alley where the synagogue is situated was subsequently called Via dell'Atleta because in 1849 an ancient statue and other antiquities were found there. The statue portrayed an athlete in the act of using a strigilis, a scraper with a curved blade used to remove sweat or oil from the skin. It is a copy from a IVth century BC statue by Lysippos. 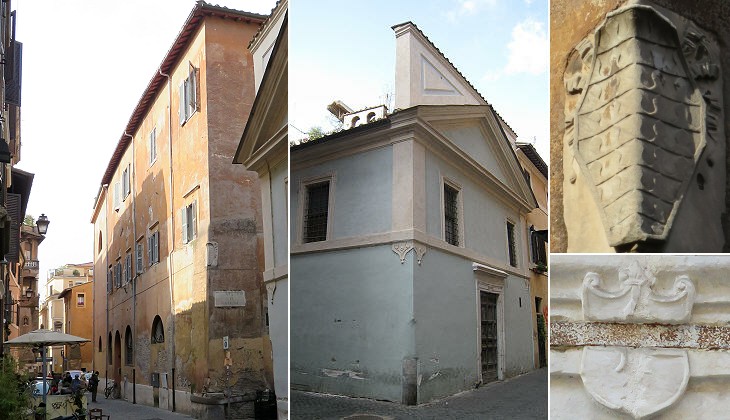 Via dei Salumi (salted meat), Via dei Vascellari (potters) and Piazza dei Mercanti (merchants) are names of streets which confirm that this part of Trastevere housed many trades in the past.
S. Andrea dei Vascellari (now deconsecrated) was built in the IXth century and later on it was acquired by the butchers' guild and in the XVIIIth century by the potters' guild (see a directory of churches belonging to a guild). The building next to it is the medieval house of the Ponziani, a family of butchers who became very important in the XIVth century. St. Frances of Rome, the founder of Monastero di Tor de' Specchi, married Lorenzo de' Ponziani in 1396. 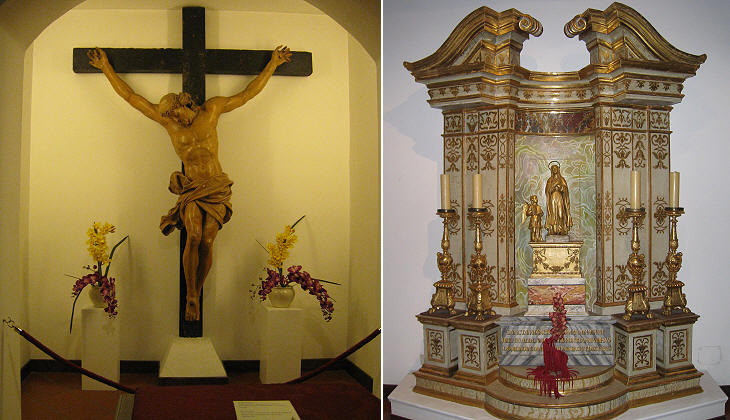 Works of art in Casa di S. Francesca Romana (external link - it opens in another window)

Casa dei Ponziani is today a hostel for (wealthy) pilgrims with a chapel and other facilities which are decorated with fine works of art. (left) 1495 Coat of arms of Rome and Rione Trastevere; (centre) 1495 coat of arms of the Castellani and Porcari families; (right) reliefs and inscriptions in Palazzo Nunes

The Castellani were a minor noble family of Trastevere and are recorded for having promoted some maintenance works at S. Benedetto in Piscinula; their small palace was pulled down in the late XIXth century when the river bed was enlarged. Two reliefs which decorated its entrance were walled in nearby Palazzo Nunes, a XVIIth century building which was enlarged and modified in the XIXth century.