Rome is at risk
(Inscription in S. Maria sopra Minerva)

S. Maria sopra Minerva is one of the most interesting churches of Rome: its interior contains masterpieces by Michelangelo, Bernini, Filippino Lippi and other important painters and sculptors. It is also the church with the highest number (5) of papal monuments after S. Pietro. Visitors usually pay little attention to its simple façade and do not notice a group of plaques on its right side. 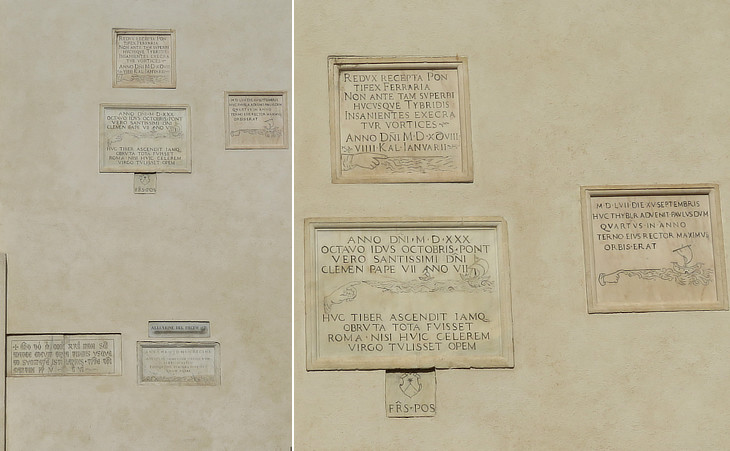 S. Maria sopra Minerva - Plaques marking the level reached by the Tiber; a detail of one of them is shown in the image used as background for this page

Rome at this day is troubled with the old overflowings of Tyber, by reason of the Tybers narrow bed, not able to receive the waters, falling suddenly from neere mountaines, after great raine or melting of snow. For memory whereof, these inscriptions are upon the wals of the Church of Saint Mary sopra Minerva. In the yeere 1530. (if I be not deceived; for the first words are raced out) the Ides of October, Clement the seventh being Pope. Huc Tyber ascendit, jamque obruta tota fuisset Roma, nisi celerem virgo tulisset opem: Thus farre came Tyber, and all Rome had drown'd, Had we not from the Virgin, swift helpe found. (..) Thus farre this muddy brookes water did swell. In each place is a red marke upon the wals how high the water ascended, by which it appeares, marking the seat of the Church, that all the plaine was overflowed betweene it and the Tyber.
Fynes Moryson - An Itinerary: Containing His Ten Years Travel Through .. Italy (in 1594)
The plaques can be divided into two groups of three: the upper group is composed of very similar plaques showing a hand pointing towards a stream of turbulent water: inscriptions in each plaque explain that the stream marks the level reached by the Tiber during floods which occurred in 1530, in 1557 and in 1598; the lower group of plaques have just an inscription indicating the level reached by the river in 1422, in 1495 and in 1870. The three higher plaques are considered as supporting evidence of the "European Little Ice Age", a period of lower temperatures and increased rainfalls which lasted approximately from 1500 to 1800.

Map of the River Tiber basin; section showing the areas with most intense rainfalls

The Tiber, unlike the other rivers of the Italian peninsula, runs parallel to the range of the Apennines mountains, where this veritable "backbone" of the peninsula reaches its highest points: M. Vettore (2476 m.); M. Terminillo (2217 m.), the "mountain of Rome"; Gran Sasso d'Italia (2914 m.), the "big stone of Italy"; M. Velino (2457 m.); M. Viglio (2156 m.); these mountains force the moist air coming from the Tyrrhenian Sea (some 50 miles to the west) to rise and eventually to cool and condense, producing local rain showers. When the ground is already saturated by previous storms, the rainfall is rapidly conveyed into the Tiber by small rivers on its left side. In particular River Aniene which flows through Subiaco and Tivoli and joins the Tiber near Ponte Salario can grow in a massive way in a matter of hours.

Isola Tiberina in November 2004, after several days of intense rainfalls

All the main recorded floods occurred between the end of September and the beginning of January: winter months are usually dry and the occasional intense rainfalls which occur in April are unlikely to cause a significant increase in the river level because the ground is not saturated.
The ancient Romans emphasized the ship aspect of Isola Tiberina. Today the shape of the small island is modified by quays built to protect it, but when the river grows these modern alterations disappear and the island conveys again the impression of being a ship.

(left) The Police station at the tip of Isola Tiberina; (right) detail of Ponte Fabricio

Very occasionally someone falls into the river, either to commit suicide or because of drunkenness. A Police station located at the tip of Isola Tiberina is in charge of quickly assisting those in need and more in general of patrolling the river banks. Their boats are usually moored along the quays, but when the Tiber grows policemen tie the boat at the balcony of their small office. A large opening at the centre of Ponte Fabricio easies the flow of water.

At Rome they have so general an opinion of the (ancient) riches of this river, that the Jews have formerly proferred the pope to cleanse it so they might have for their pains, what they found in the bosom of it. I have seen the valley near Ponte Molle (Milvio), which they proposed to fashion into a new channel for it till they had cleared the old for its reception. The pope, however, would not comply with the proposal. (..) The city of Rome would receive a great advantage from the undertaking, as it would raise the banks and deepen the bed of the Tiber, and by consequence free them from those frequent inundations to which they are so subject at present; for the channel of the river is observed to be narrower within the walls, than, either below or above them.
Joseph Addison - Remarks on several parts of Italy, in the years 1701, 1702, 1703
The last damaging flood of the Tiber occurred in December 1870, right after the annexation of Rome by the Italian State. Pope Pius IX called it a divine punishment for the sacrilege which had deprived the Church of its worldly possessions. The Italian government, more practically, debated at length on the best ways to protect Rome from further floods. Giuseppe Garibaldi, the national hero, strongly supported a project for deviating the river outside the Eternal City and turning its urban course into a canal (that is what happened to the Danube in Vienna), but eventually budget constraints led to a less expensive project. High walls along the river granted a physical protection to the lower quarters of Rome, but in addition to this the river bed was enlarged at some locations which reduced the water flow. One of these bottlenecks was at Ponte Cestio: the buildings next to S. Bartolomeo all'Isola were pulled down and the two lateral arches of the bridge were greatly enlarged.

In the XXth century several dams were built to exploit the energy of the Tiber and of its tributaries for hydroelectric generation; they have reduced the flood hazard and it is very unlikely we will ever see the Tiber flow through the "eye" of Ponte Sisto: in the past, when this happened, it announced a major incoming flood.

S. Maria sopra Minerva is not the only place where one can see plaques indicating the level reached by the river waters: Porto di Ripetta, S. Rocco, Arco dei Banchi and Ospedale di S. Spirito are some of the other locations where floods are recorded. A less known tablet written partly in Latin and partly in Italian can be seen in Rione Regola, a quarter frequently flooded by the Tiber. In this rione, after the erection of the walls on the river, the level of some streets (which once led to its shores) was raised and this explains why one can see a fine Renaissance portal half buried in the ground. Inscription at Chiostro della Minerva: The vengeful waves of the Tiber reached this point. The Wrath of God came to an end thanks to the delivery of the Virgin Mary. December 24, 1598