Ponte Milvio
(Vasi at work in the Grand View of Rome) The size of this plate indicates that it was made for Vedute di Roma sul Tevere, the first book of etchings by Giuseppe Vasi; the view was eventually included in Book V which was published in 1754, some ten years later. In his first works Vasi gave more importance to landscape than to monuments and this view of Ponte Milvio includes much of the surrounding countryside. A few years later Giovanni Battista Piranesi drew a much more detailed (and dramatic) view of the bridge. 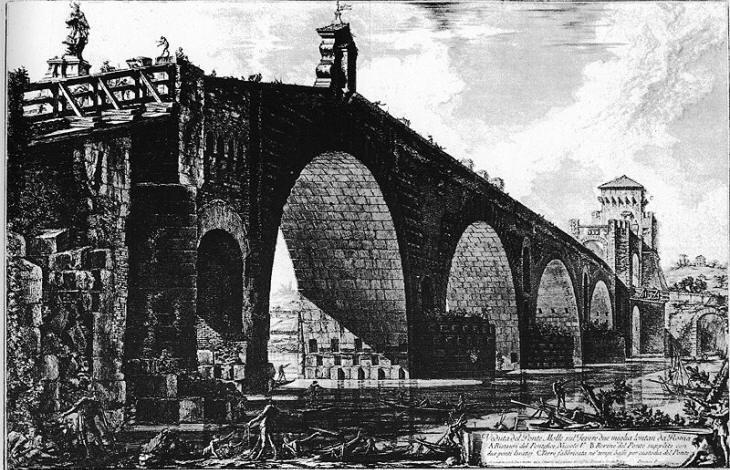 In the description below the plate Vasi made reference to: 1) Via Flaminia; 2) Via Angelica (leading to Porta Angelica). The small 1920 map shows 1) Ponte Milvio (in the past it was more usually called Ponte Molle); 2) Statua di S. Andrea; 3) Tempio di S. Andrea.

In 1804 Pope Pius VII agreed to crown Napoleon in Notre Dame, the cathedral of Paris; however at the ceremony which took place on December 2, Napoleon suddenly modified the planned ritual and he crowned himself and then his wife in front of the flabbergasted Pope (you may wish to see a famous painting by Jacques-Louis David - it opens in another window). The Pope remained four months in Paris with the hope of obtaining some concessions from the Emperor; upon his return to Rome he was welcomed at Ponte Milvio; for the occasion and at the end of an overall restoration of the bridge, the medieval tower was turned into a sort of triumphal arch by Giuseppe Valadier.
The timber structure at the beginning of the bridge was blown up in 1849 during the defence of Rome by Giuseppe Garibaldi. Other changes were made in the late XIXth century when the river banks were raised to reduce the risk of floods. 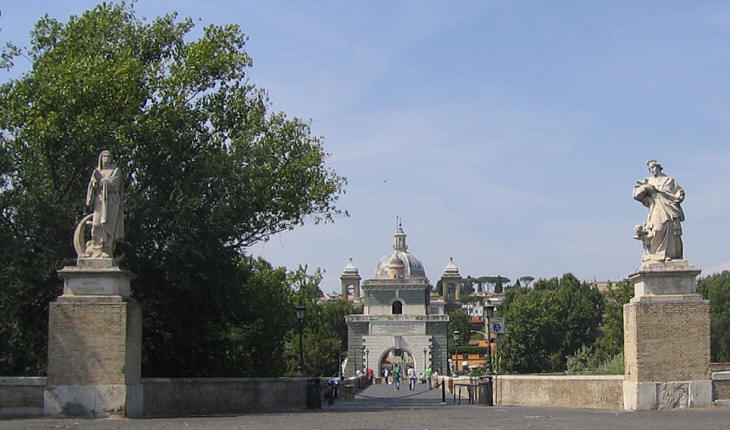 Ponte Milvio (Gran Madre di Dio, the church behind the tower of the bridge was built in 1931-1933 by Cesare Bazzani and Clemente Busiri Vici)

You may guess what I felt at first sight of the city of Rome, which, notwithstanding all the calamities it has undergone, still maintains an august and imperial appearance. It stands on the farther side of the Tyber, which we crossed at the Ponte Molle, formerly called Pons Milvius, about two miles from the gate by which we entered. This bridge was built by Aemilius Censor, whose name it originally bore. It was the road by which so many heroes returned with conquest to their country; by which so many kings were led captive to Rome; and by which the ambassadors of so many kingdoms and states approached the seat of empire, to deprecate the wrath, to sollicit the friendship, or sue for the protection of the Roman people.
Tobias Smollett - Travels through France and Italy in 1765
The bridge was built in 109 BC and it was crossed by Via Flaminia; two arches on the side towards Rome are original and retain the ancient travertine decoration; the other parts were rebuilt in the XVth and XIXth centuries.

The tower at the northern end of the bridge was most likely built by Belisarius during the Greek-Gothic War, but it was largely modified by Pope Nicholas V who rebuilt also two of the central arches (he did the same at Ponte Nomentano); however the completion of this restoration was celebrated in 1458 by his successor Pope Calixtus III; the papal coat of arms is placed between the coats of arms of Cardinal Rodrigo Lenzuoli Borgia (Calixtus' nephew who became Pope Alexander VI in 1492) and that of another member of the Borgia family. The small moon crescent on the right lower corner is a reference to Cardinal Enea Silvio Piccolomini who became Pope Pius II in August 1458. 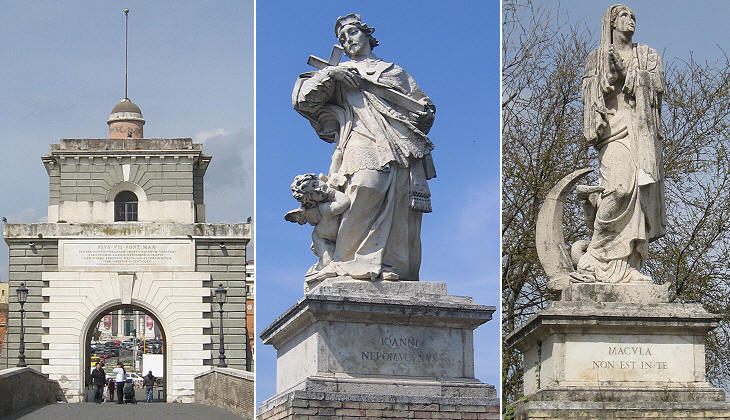 St. John of Nepomuk is the patron saint of those in danger of drowning because in 1393 he was drowned in the Vltava River at Prague by order of Wenceslaus, King of Bohemia; he was canonized in 1729 and in 1731 a statue of him was placed at the southern entrance to Ponte Milvio; according to tradition John was the confessor of the queen and he refused to reveal the name of her lover to the king; this explains the presence of a cupid with a finger on his lips in the lower part of the statue. You may wish to see reliefs showing episodes of the saint's life in Vienna and his statue on a bridge at Limburg an der Lahn in Germany.
In 1840 the statue of St. John of Nepomuk was relocated to the right side of the entrance to the bridge and it was replaced by another (rather ugly) statue. In 1805 the entrance to the other side of the bridge was embellished with two statues by Francesco Mochi which were initially made for S. Giovanni dei Fiorentini.

Couples in love who have tossed a coin in Fontana di Trevi and have put their hands inside Bocca della Verità may as well consider locking a padlock with their names at Ponte Milvio and throwing the key in the river. This unusual way to promise to love each other was first described by writer Federico Moccia in one of his novels

Today Ponte Milvio is reserved to pedestrians and it is chiefly known because lovers lock a padlock at its lamp posts, a practice which began in 2007 and has spread since then to many other bridges around the world, including Pont Neuf in Paris (it opens in another window). 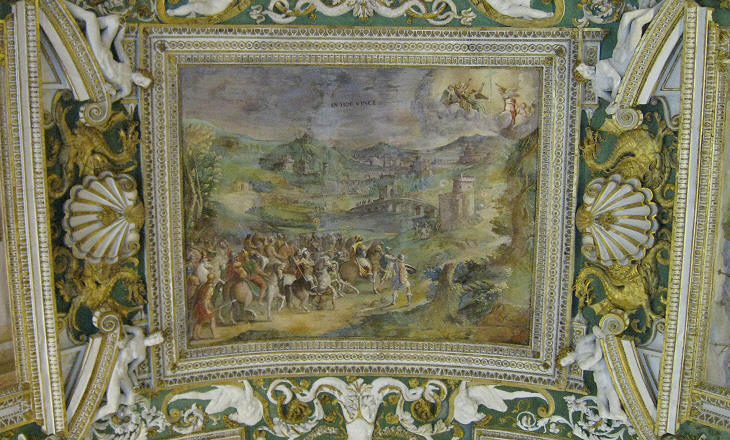 It is likewise famous for the defeat and death of Maxentius, who was here overcome by Constantino the Great. Smollett
Ponte Milvio is associated with the battle fought in October 312 AD at Saxa Rubra (near today's Malborghetto) between Constantine and Maxentius and which ended near Ponte Milvio when Maxentius drowned in the river.
According to tradition, before the battle Constantine had the vision of a cross accompanied by the words EN TOUTOI NIKA (Greek) - IN HOC SIGNO VINCES (Latin) (by bearing this symbol you will win). The image used as background for this page shows a detail of the the Vision of Constantine at Scala Regia by Gian Lorenzo Bernini. You may wish to see the Vision of Constantine at Battistero Lateranense by Giacinto Geminiani which depicts Ponte Milvio. Detail of the façade of S. Croce al Flaminio, a church built near Ponte Milvio in 1913 to celebrate the 1600th anniversary of the Edict of Tolerance by Constantine and Licinius. Mosaic by Biagio Biagetti 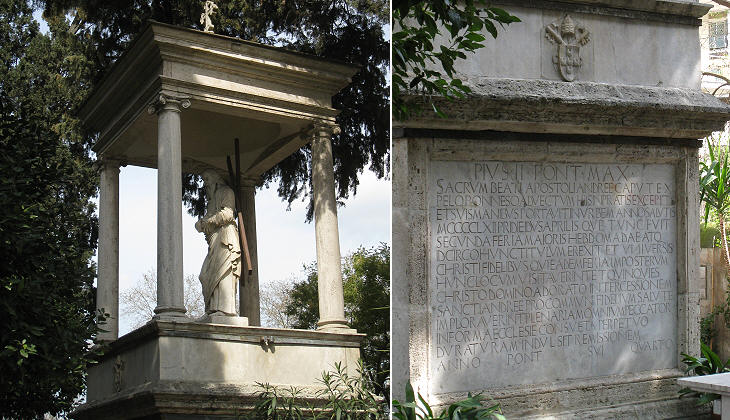 (left) Statue of St. Andrew by Paolo Taccone; (right) lengthy inscription dictated by Pope Pius II to celebrate the arrival in Rome of the head of the saint and to grant special indulgences to those who prayed at this site

Close to Ponte Milvio, in a small square between tall buildings, there is a small cemetery where the tombs are grouped around a statue of St. Andrew. It was erected here in 1462 by Pope Pius II to celebrate the arrival to Rome of the head of the saint from Patras in Greece, which had been conquered by the Ottomans in 1460. You may wish to know more about this topic. In 1848 a similar monument was erected to celebrate the finding of the head which had been stolen. In 1553 Pope Julius III built a chapel along Via Flaminia, not far from his villa, to comply with a vow he made in 1527, when he was a bishop; in June of that year he had been given as a hostage by Pope Clement VII to Emperor Charles V as part of a truce agreement reached after the Sack of Rome; the chapel was dedicated to St. Andrew because he was freed on November 30 1527, St. Andrew's Day, whereas other hostages were killed at Campo de' Fiori.
The church was designed by il Vignola. It vaguely resembles the Pantheon, but its dome is elliptical. Its neat design was praised in the XIXth century: This graceful temple is one of Vignola's best works. In simplicity and regularity of plan this little edifice rivals the temples of ancient Rome (..) its vaulted roof rises on three steps, resembling that of the Pantheon.
Rev. Jeremiah Donovan - Rome Ancient and Modern - 1844 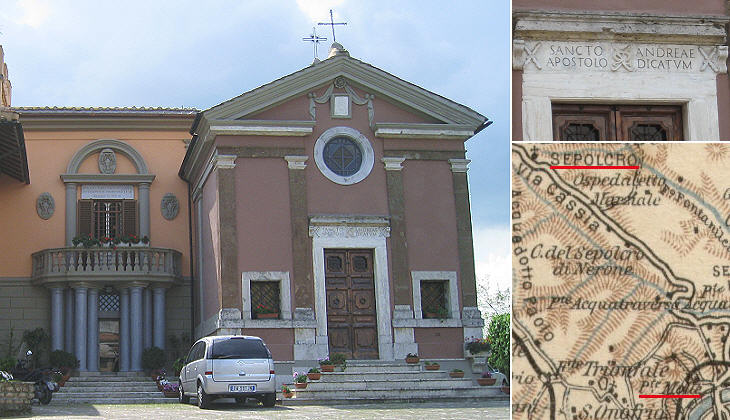 (left) S. Andrea Apostolo and the entrance to the adjoining nunnery; (right-above) detail of the façade; (right-below) early XXth century map of the environs of Rome showing Ponte Molle (Milvio) and the location of the church near the supposed tomb (sepolcro) of Emperor Nero

Immediately after Ponte Milvio the road splits into Via Flaminia leading to Rimini and into Via Cassia leading to Florence. In 1690 Cardinal Antonio Pignatelli, prior to becoming Pope Innocent XII, dedicated a chapel to St. Andrew inside a property of his family at the VIth mile of Via Cassia. Today the casino of the villa houses a nunnery and a school. 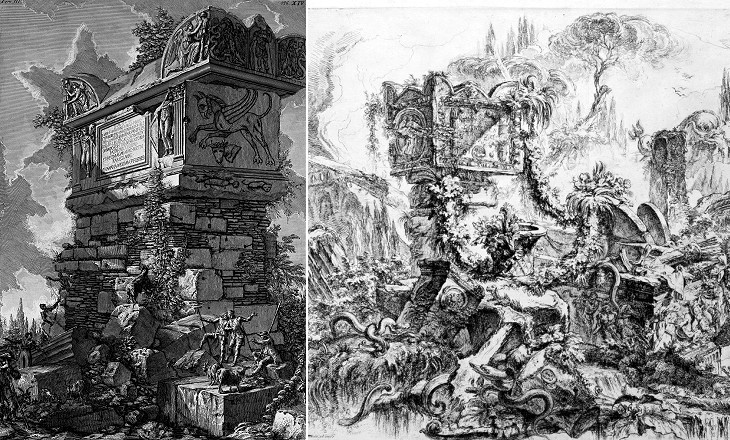 The Grand Tour says, that within four miles of Rome you see a tomb on the roadside, said to be that of Nero, with sculpture in basso-relievo at both ends. I did see such a thing more like a common grave-stone, than the tomb of an emperor. Smollett 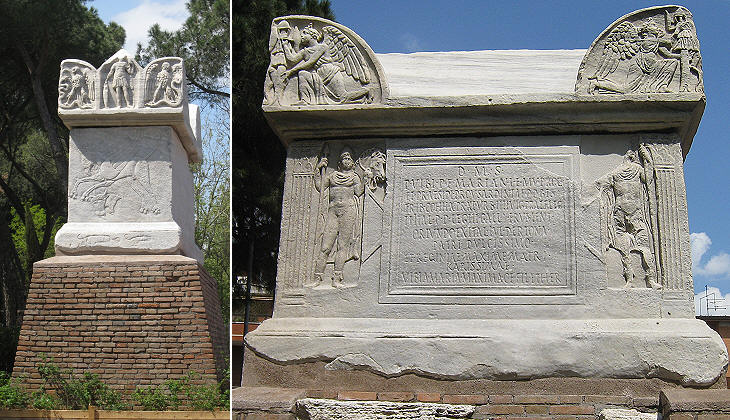 The neighbourhood is known as Tomba di Nerone because in the Middle Ages a Roman sarcophagus was believed to be the tomb of Emperor Nero. Due to the association with Nero, who was regarded as a sorcerer, the monument had a bad reputation and many unfortunate events which occurred in the area were attributed to it, including the killing of a Bavarian countess travelling as a pilgrim to Rome in 1844, as reported by Charles Dickens. The sarcophagus was dedicated by Vibia Maria Maxima to her father Publius Vibius Marianus who held several minor positions in the Roman army in ca 220-240 AD; it is finely decorated with reliefs showing among other subjects, Castor and Pollux, the demigods who protected Rome.

Next plate in Book 5: Porto di Ripetta.
Next step in Day 1 itinerary: Casino di Papa Giulio III.
You may wish to move on along Via Cassia.