In this 1761 etching Giuseppe Vasi called Casino della Vigna di Papa Giulio III the building which is now usually referred to as Palazzina di Pio IV (left part of the etching), whereas the building in the background is known as Villa Giulia after Pope Julius III, for whom the whole complex was designed. 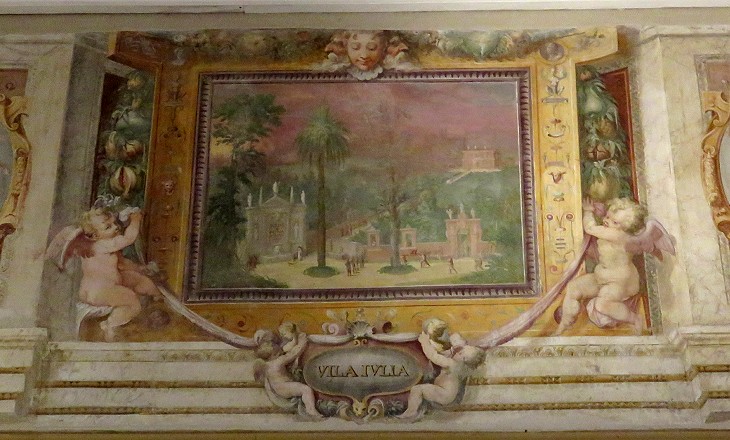 The villa had a quay on the River Tiber, where the Pope and his retinue landed when they reached the site by boat from the Vatican (it is lost); the access by land on Via Flaminia, near Tempio di S. Andrea, a chapel built by the Pope, was marked by a fountain which was incorporated into Palazzina di Pio IV from where an avenue led to Villa Giulia, the main building.
The view is taken from the green dot in the small late XIXth century map here below. In the description below the plate Vasi made reference to: 1) Façade of the Casino and fountain; 2) Casino and fountain of Villa Sinibaldi; 3) Casino belonging to the Reverenda Camera Apostolica built by Giacomo Barozzi il Vignola (Villa Giulia). The small map shows also 4) Cappella dell'Arco Oscuro. 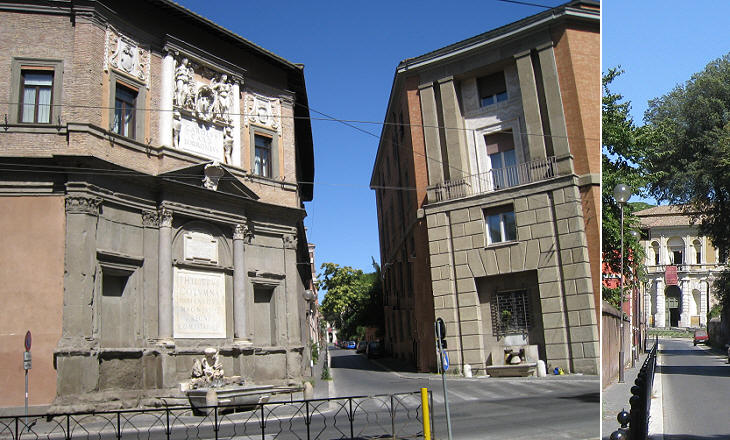 The fountain and the decorated wall which stood opposite Palazzina di Pio IV have been replaced by a huge modern building owned by Cassa Nazionale del Notariato, the very rich provident fund of Italian notaries. The plate shows a lost inscription: Fed. Card. Borr. MDCLXXII which indicates that in 1672 the property belonged to Cardinal Federico Borromeo iuniore of an important family from Milan. Seven members of this family were appointed cardinals, including another Federico, cousin of Cardinal Carlo Borromeo. 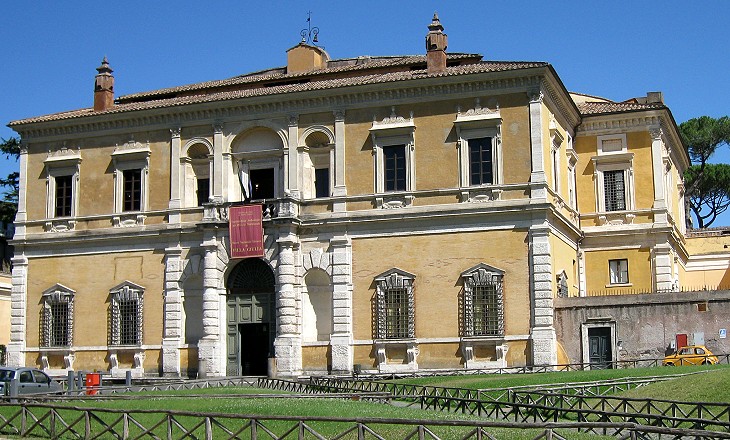 The main casino of Villa Giulia is attributed to il Vignola, but parts of the complex were designed by Giorgio Vasari and Bartolomeo Ammannati. It is thought that Michelangelo himself provided some advice.
The façade is regarded as an example of the transition from Renaissance to Mannerism (or Late Renaissance): it retains the harmonic proportions of the former, but it shows the attention to decoration which characterizes the latter. It was completed in 1553.
The image used as background for this page shows the decoration of a window which is based on wreaths of laurels, one of the Pope's heraldic symbols. 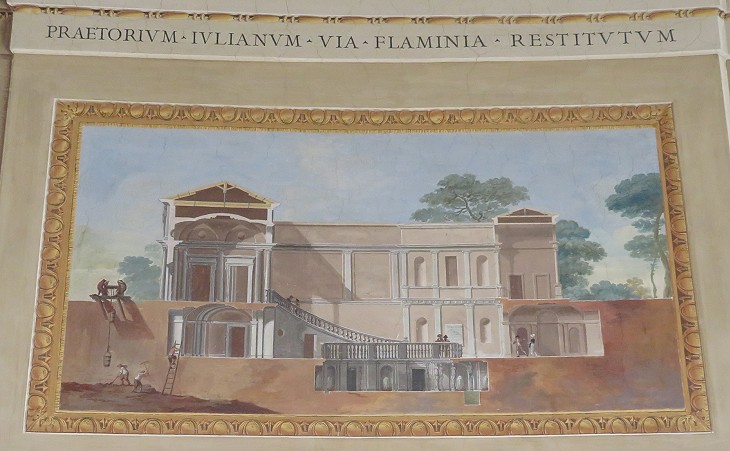 The villa was confiscated in 1556 by Pope Paul IV on the assumption that it had been built with funds from the Papal treasury (although this was the usual practice). It was assigned to Reverenda Camera Apostolica, a body in charge of many administrative and financial tasks and in the following centuries the main building was used for all sorts of purposes, but there were also some efforts to restore it, because occasionally it housed important personages who were to make their official entrance in Rome in the following day at Porta del Popolo (e.g. Queen Christina of Sweden). 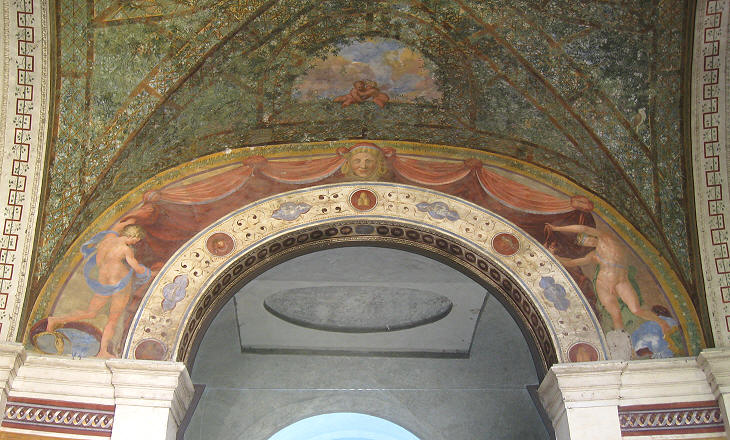 Decoration of the arch leading to the courtyard

He gave entertainments, which he enlivened with proverbial and other modes of expression, that sometimes mingled blushes with the smiles of his guests.
Leopold von Ranke - History of the Popes - 1836.
The purpose of the casino was to be a place of leisure for the Pope and his guests: this is clearly revealed by the decoration of the arch leading to the main courtyard: two naked young men raise a curtain as if they were saying that a show is about to start. The three mountains at the top of the arch are another heraldic symbol of the Pope. Frescoes in the casino

The decoration of the rooms of the casino is to a great extent lost; the remaining paintings however help in understanding the atmosphere at the court of Pope Julius III: they portray monuments of Ancient Rome, mythological tales and scenes of bacchanals with nymphs and satyrs. This decoration brings to mind that in the courtyard of Palazzo Spada which was built at the same time as Villa Giulia. 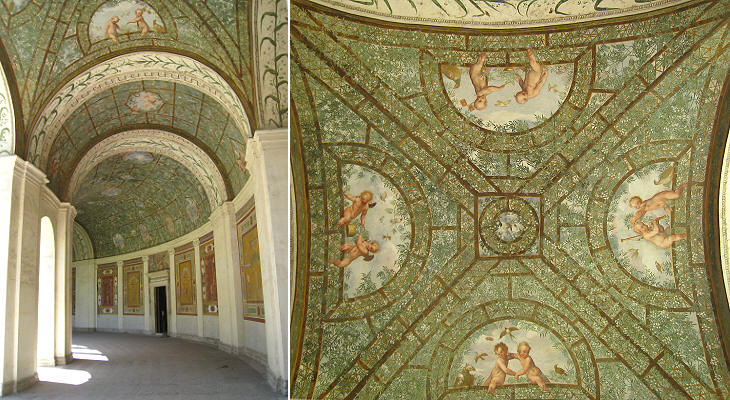 (left) Portico of the courtyard; (right) frescoes of the portico

One of the most striking features of Villa Giulia is the decoration of its semicircular portico: frescoes by Pietro Venale portray a beautiful pergola (an arched structure forming a framework for trailing plants) with rare birds and putti. 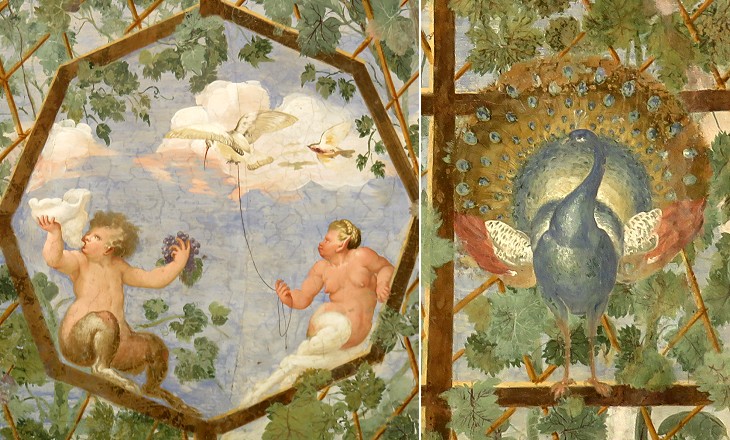 Details of the frescoes of the portico

This kind of decoration was imitated in other buildings of that century, e.g. in the loggia of Palazzo Altemps, at Palazzo Farnese di Caprarola and with some modifications at Villa Medici. 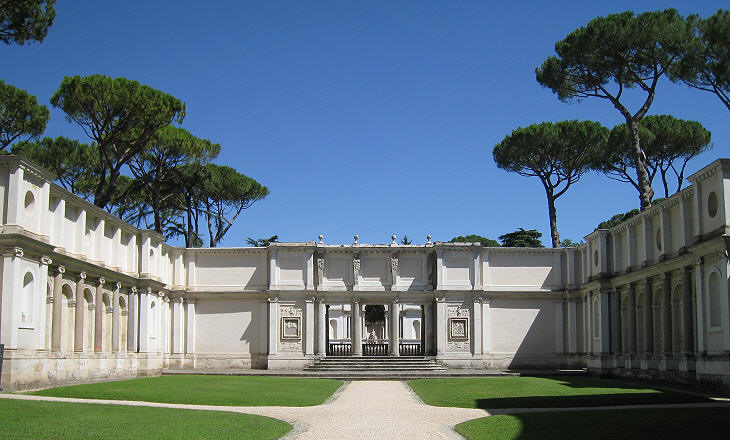 For the decoration of the main courtyard Ammannati used some ancient granite columns. The niches between the columns housed statues, while the plain walls were decorated with reliefs. We do not know to which extent this decoration was completed, but its design influenced that of Casino di Villa Medici, which also was designed by Ammannati.
The etching by Vasi shows that there were not as many pine trees as there are today; they have been planted at a later period, when they were thought to have a positive effect on malaria. Villa Giulia was used as a leisure residence for only a few years; its proximity to the Tiber made it an unhealthy site in summer; almost all the other villas of Rome were built on high ground and at some distance from the river. 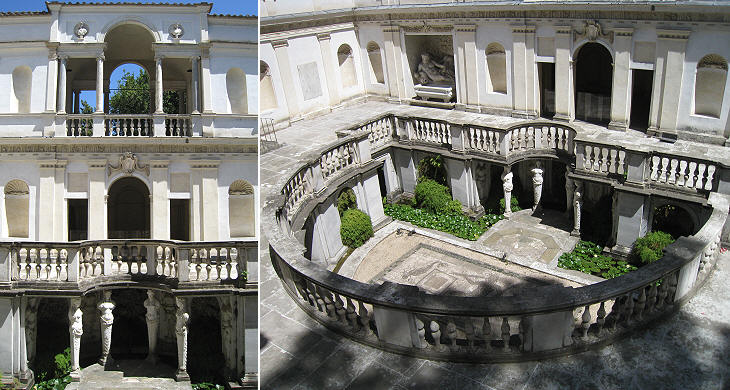 Views of the Nymphaeum (a monumental fountain)

Neere it lies the most sweete Vineyard of Pope Julius the third, and his pleasant Fountaine, casting up water two elles high.
Fynes Moryson - An Itinerary: Containing His Ten Years Travel Through .. Italy (in 1594)
The elaborate nymphaeum is attributed to Vasari and Ammannati and it is characterized by the use of serliana, windows or passages resembling a triumphal arch. A serliana window was designed by Ammannati for the courtyard of Palazzo di Fiorenza when it belonged to the family of Pope Julius III and later on a grand one at Villa Medici.
Corridors, secret passages, artificial grottoes seem to indicate that the Pope and his guests loved to play hide-and-seek, although not in the same innocent way children do. The nymphaeum and the other fountains of the villa were supplied with water from Acqua Vergine through a long underground conduit. 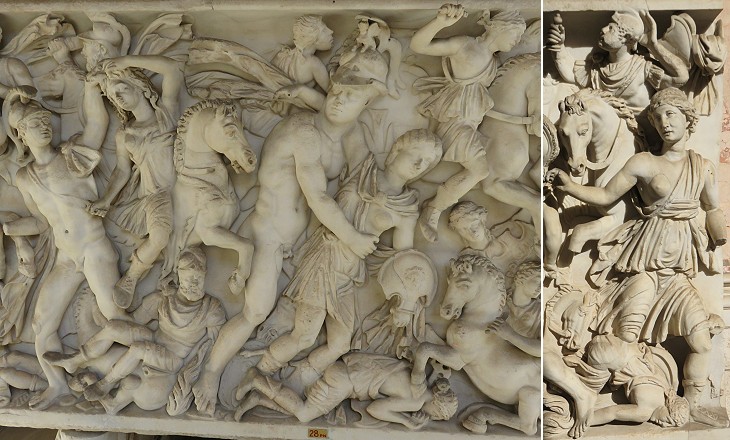 Musei Vaticani: details of the relief of an ancient sarcophagus which embellished Villa Giulia. It depicts an Amazonomachy and it is similar to one found near Via Tiburtina. The central scene shows Theseus abducting Hyppolita, Queen of the Amazons, whom eventually he married. Their marriage is narrated in "A Midsummer Night's Dream" by William Shakespeare

The most interesting works of art which decorated the villa were moved by Pope Pius VI to Museo Pio-Clementino, but other antiquities were acquired by private collectors or destroyed. 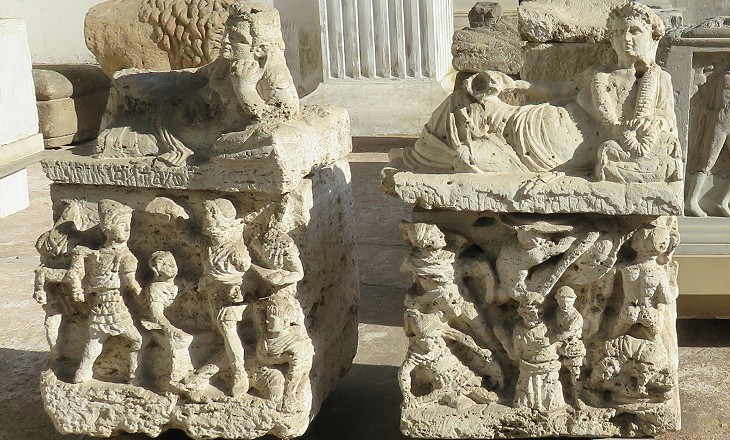 In 1887 Villa Giulia was acquired by the Italian Government in order to house Museo Nazionale Etrusco. The Etruscan antiquities, (..) the most precious witnesses of that rather inarticulate civilization, must in any arrangement exhaust the most instructed interest. Just when the amateur archaeologist, however, is sinking under his learning, the custodian opens a window and lets him look out on a beautiful hill beyond certain gardens, where a bird is singing angelically. I suppose it is the same bird which sings all through these papers, and I am sorry I do not know its name.
Read more of William Dean Howells' account of his visit to Villa di Papa Giulio in 1908. 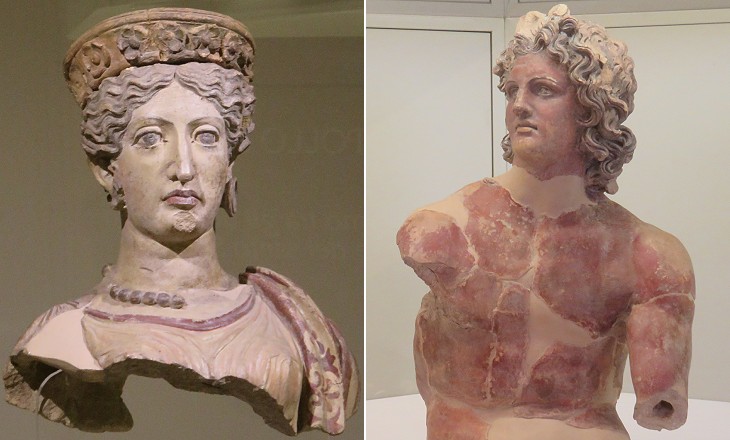 Today the Etruscan works of art are displayed in a much more interesting way than they were in 1908 and the collections have been greatly enriched by new findings. The Etruscans often used terracotta instead of marble for the decoration of their temples and for their sarcophagi. You may wish to see two statues from Veii and the Sarcophagus of the Spouses from Cerveteri, which are both in this museum. 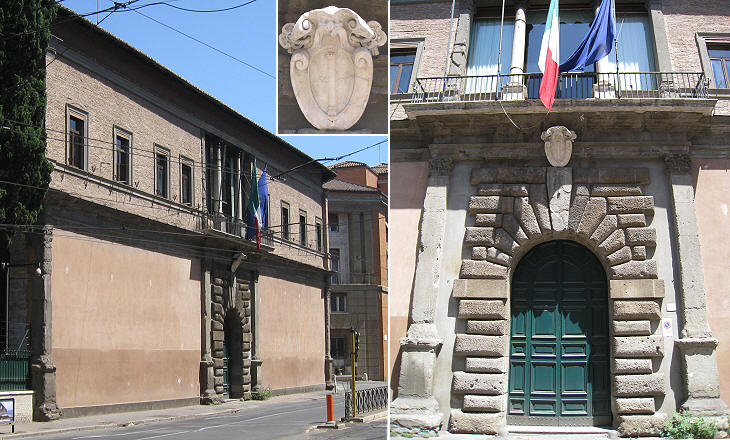 The small casino along Via Flaminia was acquired by Pope Pius IV who donated it to his nephew Cardinal Carlo Borromeo. The building is now used as the Italian Embassy to the Holy See and it is officially called Palazzo Borromeo. It belonged to this family until it was acquired by marriage by the Colonna, who placed above the entrance a coat of arms of Pope Martin V Colonna. 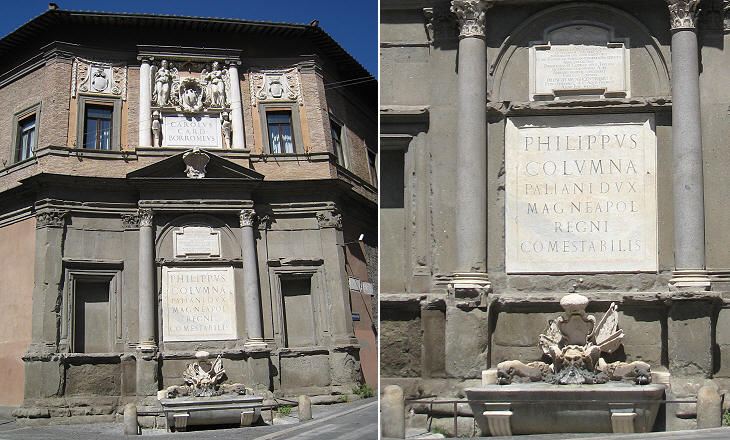 (left) Decorated façade; (right) fountain and inscription of the Colonna which helps in understanding why the southern part of the Quirinal Hill is called Magnanapoli

The decoration of the building was completed by Pope Pius IV and it was designed by Pirro Ligorio, who built for the Pope a casino in the Vatican gardens. The Colonna placed a large inscription celebrating Filippo Colonna, Duke of Paliano; he had also the title of Gran Connestabile (Great Constable) of the Kingdom of Naples. He decorated the fountain with flags to celebrate the 1571 Christian victory at the Battle of Lepanto to which Marcantonio Colonna, his uncle, contributed. You may wish to see the ceiling of a hall of Palazzo Colonna where that victory is celebrated. 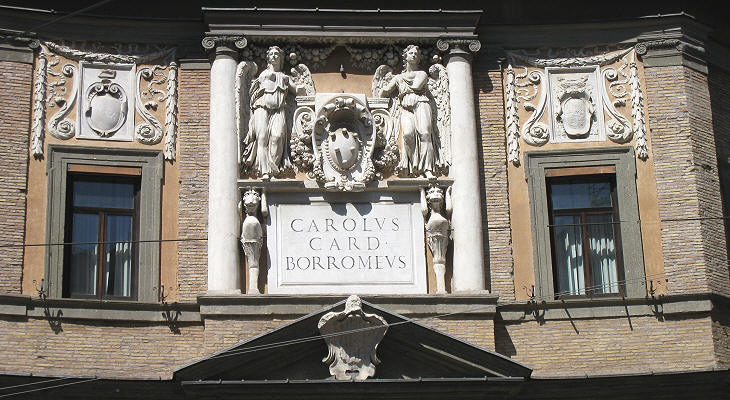 Decoration of the upper part

We learn from Vasi that the Colonna owned an inn on the other side of Via Flaminia: according to Vasi its food was tasty and its wine excellent: unfortunately it does not exist any longer. 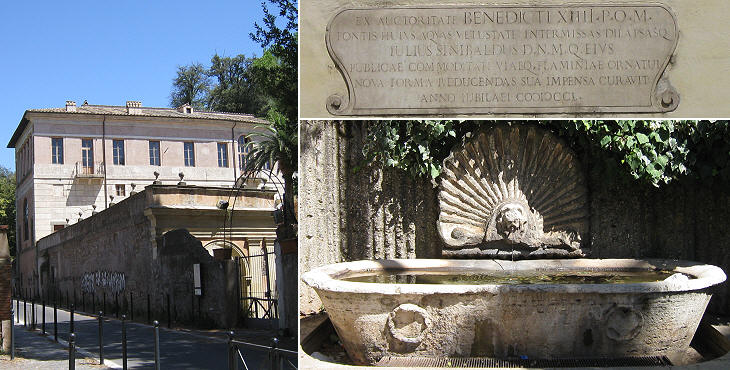 Villa Sinibaldi was originally built in the second half of the XVIth century for Cardinal Pier Donato Cesi. It was designed by il Vignola. In 1702 it was sold to the Sinibaldi who in 1750 were granted a new supply of water by Pope Benedict XIV. The Sinibaldi sold it to Prince Stanislaw Poniatowski, nephew of Stanislaw August II, the last King of Poland, who had a town palace near Via Condotti. At the beginning of the XIXth century Prince Poniatowski modified the building and other changes were made in the following years. Today it is known as Villa Poniatowski and it houses special exhibitions of Museo Nazionale Etrusco.

In 1686 Pope Innocent XI Odescalchi built a formal entrance to a chapel inside an arch (arco oscuro - dark arch). The relief shows an eagle and a lamp, which are heraldic symbols of the Pope.