- Palestrina in the Museums - 2
(detail of a fresco at S. Onofrio; this page is also part of Giuseppe Vasi's Environs of Rome description)

You may wish to read a general description of Palestrina or of the Sanctuary of Fortuna Primigenia or a page on the ancient statues, reliefs and mosaics of Palestrina first. 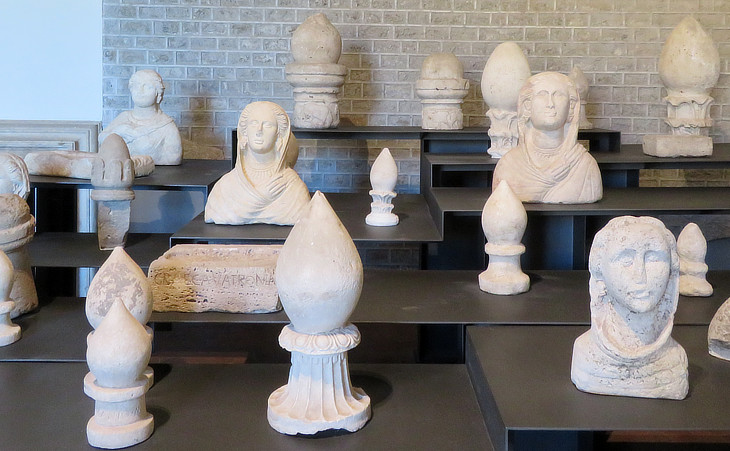 In the Colombella necropolis, brought to light on via Prenestina just before the ancient walls of Praeneste starting from 1855, 333 tombs were found: some simpler, others decorated and with inscriptions and others, rarer, surmounted by a female bust. The pine cone-shaped funerary stones, a symbol of eternity, were used as markers to identify burials. In la Colombella three strata of tombs have been found; the date of the lowest stratum is not later than the Vth or VIth century BC. 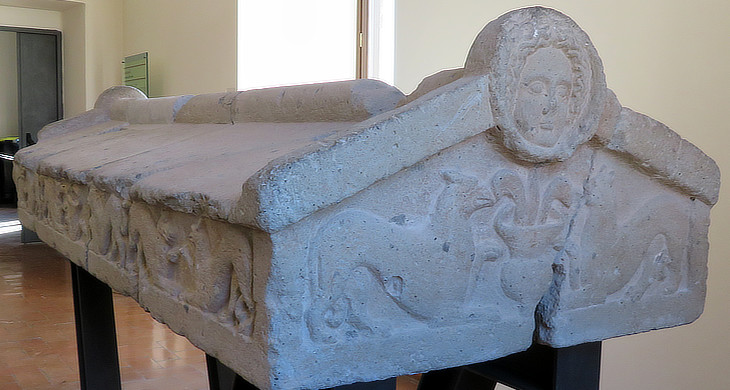 This lid is one of the earliest examples of decorated sarcophagus in this part of Latium. Its shape recalls Etruscan examples. The depiction of a head of Medusa was meant to protect the sarcophagus and it can be seen in many later Greek/Roman sarcophagi, e.g. at Antalya. Lions and griffins were guardian animals also in Christian time (see examples at Verona and Ancona). 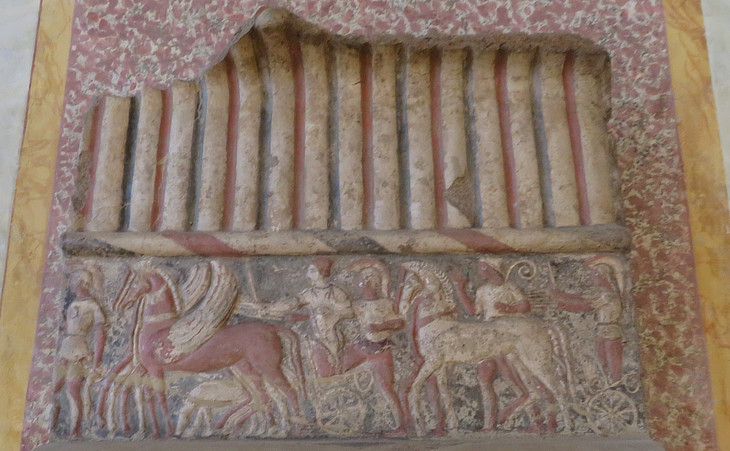 The sima is a terracotta rising above the roof and attached to a horizontal plaque which was nailed to the woodwork. Sporadic finds of fine terracotta temple revetments show the continuance of wealth and artistry at Praeneste in the Vth century BC, but we have no buildings to associate with them. The use of terracotta to decorate temples and make statues and sarcophagi was typical of the Etruscans as well as the depiction of winged horses (see an example at Tarquinia). 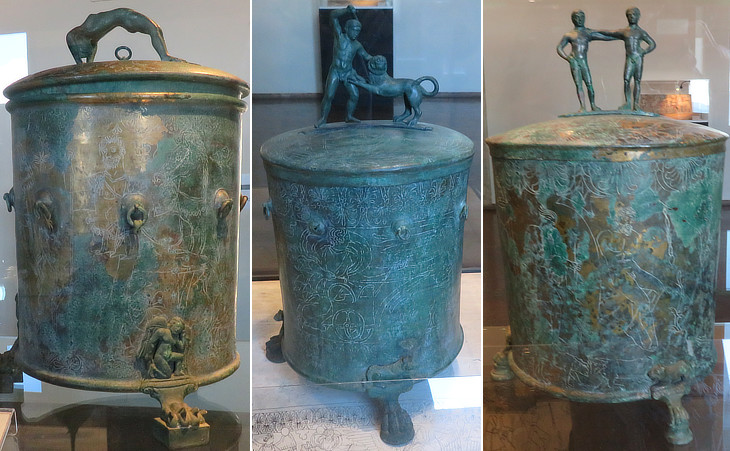 Museo Archeologico Nazionale di Palestrina: "Cistae" from Palestrina; a detail of one of them is shown in the image used as background for this page

Another class of cistae, well known from vase-paintings and from a number of specimens in metal actually preserved, are the toilet- or jewel-cases of Italian ladies. (..) In vase-paintings such cistae are often accompanied by other requisites for the toilet, mirrors, scent-bottles, etc., and thus leave no doubt as to the use for which they were intended. These vases have been found mostly in Magna Graecia, more rarely in Greece Proper or in Etruria. The metal cistae, on the other hand, come almost exclusively from Praeneste, where they were produced on a large scale.
A Dictionary of Greek and Roman Antiquities. William Smith, William Wayte, G. E. Marindin - 1890 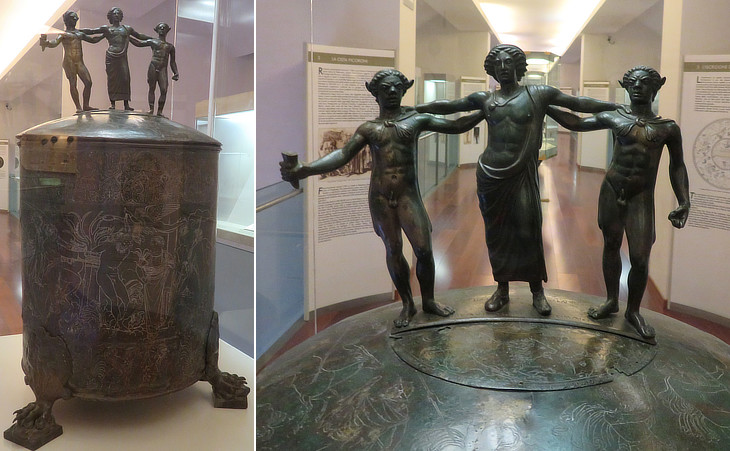 The most beautiful of these and the first to be discovered (about the year 1737) is the celebrated Ficoroni cista, now in the Museo Kircheriano at Rome. Of late years the results of excavation have been unusually fruitful: in 1866 Schoene described 70 Praenestine cistae preserved entire, besides fragments; in 1882 M. Fernique reports the number as reaching 100. Most of these are in bronze; (..) They are mostly covered with ornamental designs engraved upon the surface of the metal (graffiti). (..) The Praenestine workmanship is somewhat rough: the bronze plate was first engraved, then hammered into an oval or cylindrical shape, and finally the feet and rings or handles were put on without much regard to the pattern underneath them. They were, it is clear, turned out cheaply as manufactured articles, not finished artistic products. The Ficoroni cista is of quite exceptional beauty, and a real work of art. Dictionary 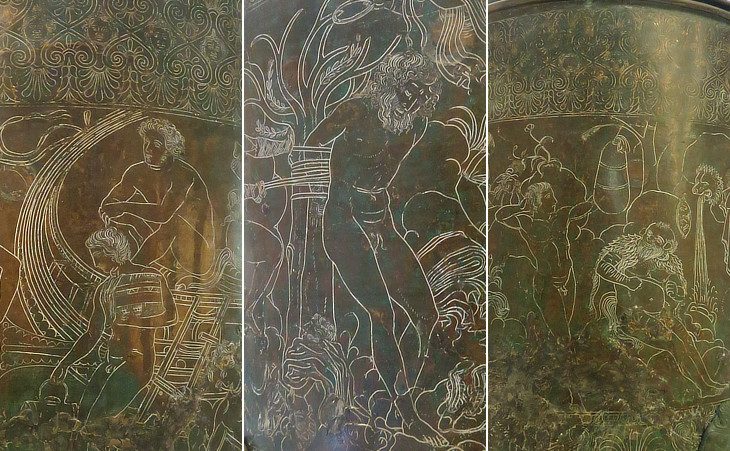 Museo Nazionale Etrusco di Villa Giulia: Cista Ficoroni: details of its decoration: (left) Argo, the ship of Jason; (centre); the defeat of Amycus, king of the Bebryces; (right) Polydeuces (Pollux) training for the fight and Papposilenus, an old satyr, who imitates him

It is the only cista with an inscription, NOVIOS PLAUTIOS MED ROMAI FECID; which shows that, though found at Praeneste, it was not made there. Among its ornaments the chief place is occupied by a series of scenes from the Argonautic legend. Dictionary
Here were the oxstalls and farm of Amycus, the haughty king of the Bebrycians, whom once a nymph, Bithynian Melie, united to Poseidon Genethlius, bare the most arrogant of men; for even for strangers he laid down an insulting ordinance, that none should depart till they had made trial of him in boxing; and he had slain many of the neighbours. And at that time too he went down to the ship and in his insolence scorned to ask them the occasion of their voyage, and who they were, but at once spake out among them all: Listen, ye wanderers by sea, to what it befits you to know. It is the rule that no stranger who comes to the Bebrycians should depart till he has raised his hands in battle against mine. Wherefore select your bravest warrior from the host and set him here on the spot to contend with me in boxing. But if ye pay no heed and trample my decrees under foot, assuredly to your sorrow will stern necessity come upon you. Thus he spake in his pride, but fierce anger seized them when they heard it, and the challenge smote Polydeuces most of all. And quickly he stood forth his comrades' champion, and cried: Hold now, and display not to us thy brutal violence, whoever thou art; for we will obey thy rules, as thou sayest. Willingly now do I myself undertake to meet thee.
Apollonius Rhodius, Argonautica, translated by Robert Cooper Seaton, from the Loeb Edition of 1912 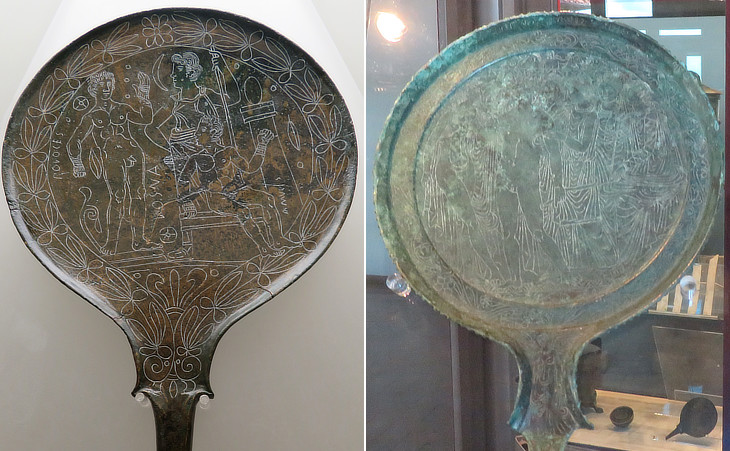 Several cistae and mirrors from Palestrina are decorated with scenes of the Argonauts' journey to the land of the Golden Fleece. This myth was rarely represented in the Greek Classic age: some episodes of it were widely popular, e.g. the Abduction of Hylas, but in general it is rarely depicted in ancient sarcophagi, mosaics or frescoes. 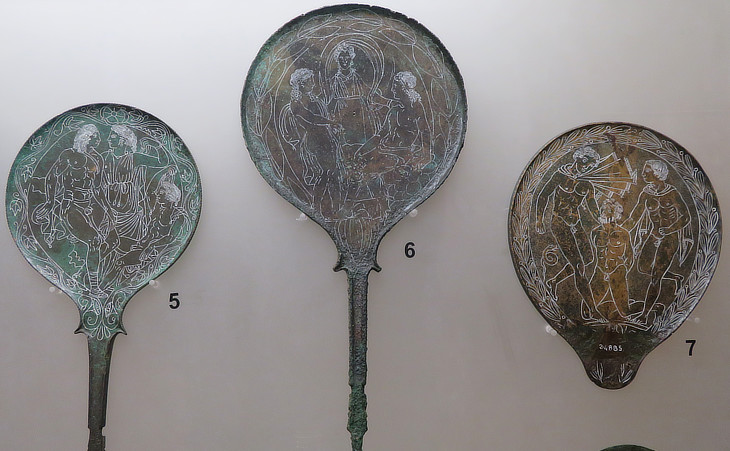 Some of the greatest treasures of the present collection have been obtained from the famous dealer, Signor Castellani, whose first contribution was made in 1865, and included the figure of a philosopher from Brindisi, the Etruscan Demeter, and several fine statuettes and Etruscan mirrors, also a collection of Greek armour from Southern Italy. These were followed by the Hypnos head and sundry bronze vases in 1868, and a series of fibulae, rings, keys, and small bronze objects with the collection of gems and gold ornaments acquired in 1872. In 1873 the Museum through the same agency became possessed of the splendid bronze head from Armenia, the equally fine heroic figure from the Lake of Bracciano, the archaic statuette with diamond eyes from Verona and many fine statuettes and mirrors. Finally, at the last Castellani sale in 1884, several very fine Etruscan cistae were acquired.
Catalogue of the bronzes in the Department of Greek and Roman Antiquities, British Museum - 1899.
Today some of the bronze mirrors at the British Museum are labelled as "said to be from Palestrina". The pieces sold by Alessandro Castellani to many museums, including Italian ones, have been examined to check whether a piece is restored, a pastiche, enhanced or an outright forgery. The Barberini tomb was rich and contained a pectoral fibula in gold and a great bronze cauldron; it also produced a bronze throne and a great bronze tray mounted on wheels, as well as numerous very fine carved ivories, including a cup supported by four caryatids, and a charming wooden box in the form of a fawn. The use of some of the ivories may remain in doubt, but not the wealth to which they attest.
The Princeton Encyclopedia of Classical Sites - 1976
To gain an impression of what the culture of the period must have been, we should turn to the rich finds of contemporary Etruscan tombs, or to those from Praeneste, the modern Palestrina. Here two chamber-tombs of the first half of the seventh century have yielded objects which mirror the tastes of a society at once luxurious and refined, such as we may suppose flourished at Rome under the Etruscan kings. These treasures are now conveniently exhibited in the Museo di Villa Giulia (Tomba Barberini) and at the newly arranged Museo Pigorini (Tomba Bernardini). (..) The bronze furniture comprises an embossed cauldron set on a high and richly decorated stand.
Eugénie Sellers Strong - Art in ancient Rome - 1928

Among the exquisitely fashioned objects of personal adornment are plaques of pure gold adorned with rows of tiny animals (sphinxes, lions, chimaeras, human-headed lions, horses, etc., which are themselves decorated with granulated zigzags and other patterns); fringes of silver-gilt ending in tiny ducks or doves; gold brooches and hair-pins, and small bossy disks with a ring at the back intended possibly as miniature votive shields. In spite of certain Graeco-Oriental details, these gold ornaments seem peculiar to Etruria and Latium, and the product of local goldsmiths. The silver utensils, on the other hand, belong to a class known elsewhere, and are possibly of Cypriote or Phoenician origin.(..) The various ivory objects are delicately carved in relief. Strong 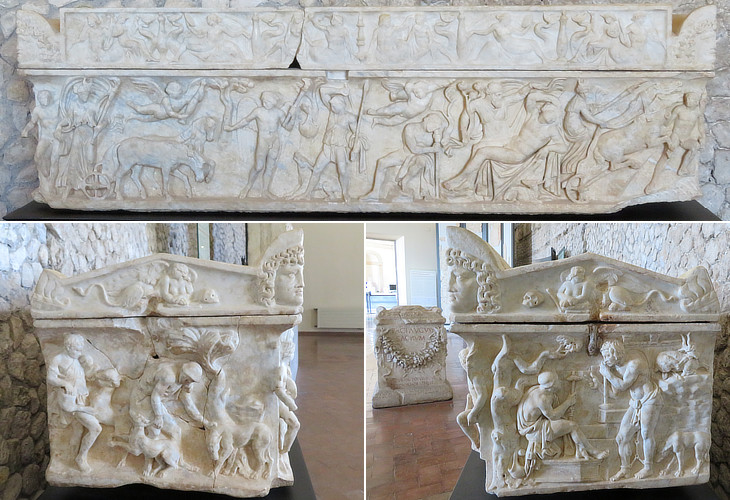 Museo Archeologico Nazionale di Palestrina: IInd century AD sarcophagus depicting: (above) myth of Selene and Endymion; (below) perhaps Hephaestus/Vulcan and the Golden Dogs and his Forge

The sarcophagus was found in 2000 by Italian authorities in the environs of Palestrina while searching for looted works of art.

Return to Palestrina - page one: the town or page two: the Sanctuary of Fortuna Primigenia or page three: statues, reliefs and mosaics in the Museums