- Ancient Terracina
(detail of a fresco at S. Onofrio)

Ferdinand Gregorovius, a German historian best known for his studies on medieval Rome, spent some days at Anzio in June 1854; from that port on the Tyrrhenian Sea he saw Mount Circeo at the end of a long and sandy coast. He was fascinated by the view of this isolated mountain which is named after Circe, the witch-goddess who turned Ulysses' comrades into hogs (The Odyssey - Book X).
Gregorovius went nearer to the mountain by walking to Nettuno and Torre Astura, but only in 1873, almost 20 years later and when he was about to return to Germany, he set foot on it. He described his visit in Das Kap der Circe (Circe's Cape), an account he wrote for a German paper. 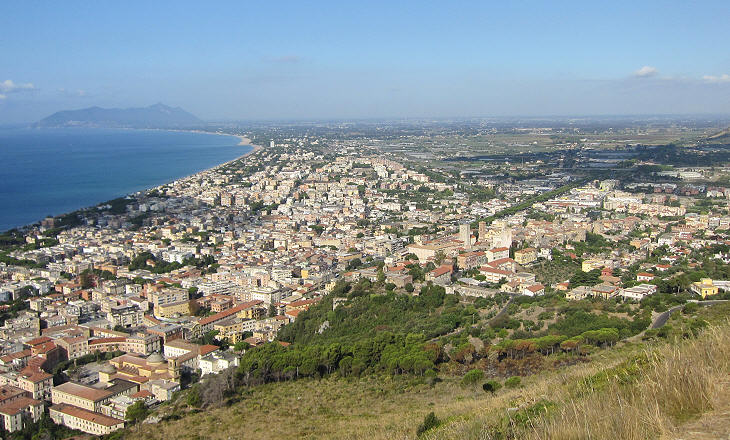 View from the Temple of Jupiter Anxur on Monte S. Angelo: in the centre of the image medieval Terracina; in the lower left corner SS. Salvatore, a large 1845 church; in the distance Mount Circeo and the coastal plain which for centuries was known as the Pontine Marshes

In order to reach San Felice, a very small town at the foot of Mount Circeo, Gregorovius first went to Terracina, a larger town where he could find adequate accommodation; he spent the Easter Week there and before returning to Rome he rented a boat with four oarsmen to go to San Felice by sea, because the path along the beach was not safe owing to the presence of wild buffaloes. Ancient polygonal walls: (left) along the road leading to Monte S. Angelo; (right) to the left of Porta Romana

The focus of Gregorovius' account was on Mount Circeo, so he did not expand on Terracina although the town had a long history and many interesting monuments. According to tradition it was founded by Greeks from Sparta, but its name, very similar to Tarquinia is thought to indicate an Etruscan origin. In the Vth century BC it was conquered by the Volsci, an Italic tribe which controlled a large territory south of Rome, which was described by Gregorovius in another account.
Terracina retains some short stretches of polygonal or cyclopean walls similar to those of Cori and Norba, other ancient towns on the edge of the Pontine Marshes. 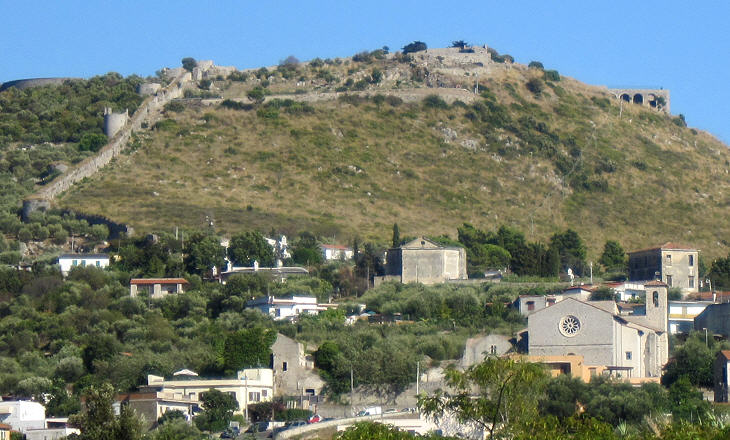 Monte S. Angelo, the site of the ancient acropolis, and the walls which protected it; in the foreground S. Domenico (a XIIIth century Romanesque church)

Ancient Terracina was founded on a low hill near a higher one (Monte S. Angelo); the Volsci probably fortified this higher hill, but the walls and towers which now protect it are generally thought to have been built at the time of Silla; they were therefore built at the same time as the Sanctuary of Fortuna Primigenia at Palestrina. The western side of Monte S. Angelo did not require fortifications because a high cliff provided it with a very effective natural defence. 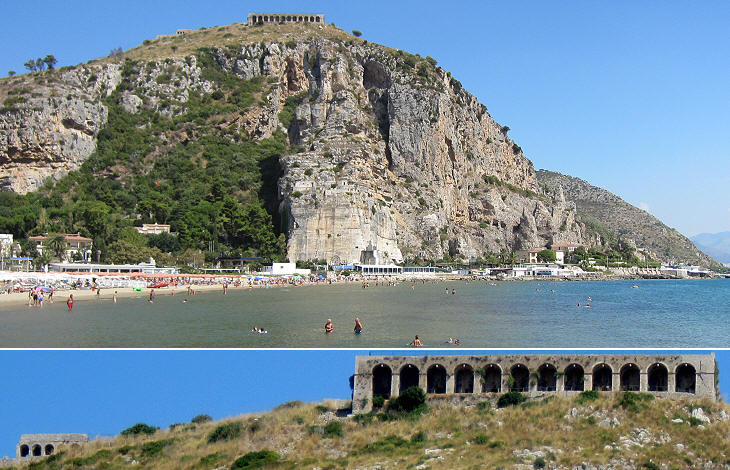 (above) Monte S. Angelo seen from the site of the ancient harbour; (below) the structures supporting the Minor Temple (left) and the Temple of Jupiter Anxur (right)

Close before me stood Terracina in the fertile, Hesperian landscape. Three lofty palm-trees, with their fruit, grew not far from the road. The vast orchards, which stretched up the mountain-sides, seemed like a great green carpet with millions of golden points. Lemons and oranges bowed the branches down to the ground. Before a peasant's hut lay a quantity of lemons, piled together into a heap, as if they had been chestnuts which had been shaken down. Rosemary and wild dark-red gillyflowers grew abundantly in the crevices of the rock, high up among the peaks of the cliffs, where stood the magnificent remains of the castle of the Ostrogothic king Theodoric, and which overlook the city and the whole surrounding country. My eyes were dazzled with the beautiful picture, and, quietly dreaming, I entered Terracina.
Hans Christian Andersen - The Improvisatore - in Augustus J. C. Hare - Days near Rome - 1875
The imposing ruins of a portico supporting a terrace at the top of the cliff have always been very visible from the sea; they were thought to belong to a fortress built by Genseric, King of the Vandals (July 10, 1787 letter of J. H. W. Tischbein to J. W. Goethe) or by Theodoric, King of the Ostrogoths.
Methodical excavations started only in 1894 and archaeologists soon understood that the portico was built at a much earlier time. (above) Rear view of the Temple of Jupiter Anxur; (below) front view of the temple and to its right a small square building which contained an empty space from which priests issued prophecies

Archaeologists identified the foundations of a temple on the large terrace supported by the portico; the lack of inscriptions, statues or reliefs did not allow a proper identification of the gods worshipped in the temple; eventually, on the basis of two verses by Virgil (quis Iuppiter Anxurus arvis/praesidet - The Aeneid - Book VII - 799-800) saying that the fields of Terracina were protected by Jupiter Anxurus, the temple was thought to be dedicated to Jupiter Puer (having the attributes of a young boy); the exact meaning of Anxur and what it refers to is still a matter for debate.
The temple had a slightly different orientation than the terrace upon which it was built in order to make it more visible to ships coming from Naples along the coast. A Greek seaman at the sight of the temple would have immediately thought of those of Aphaea at Aegina or of Poseidon at Cape Sounion. 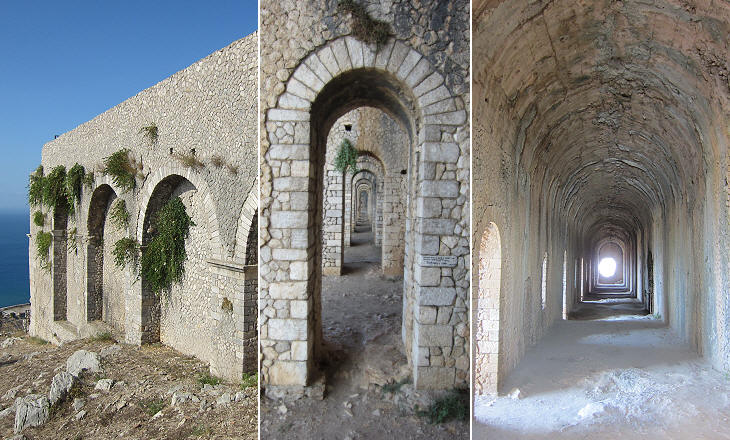 Archaeologists found a large covered gallery behind the portico which was probably utilized for processions; the structures supporting the terrace are regarded as one of the best examples of opus incertum, a Roman construction technique, an early type of opus caementicium (based on the use of concrete), which later on was replaced by opus reticulatum, a more elaborate type of masonry which can be seen in the Capitolium of Terracina. 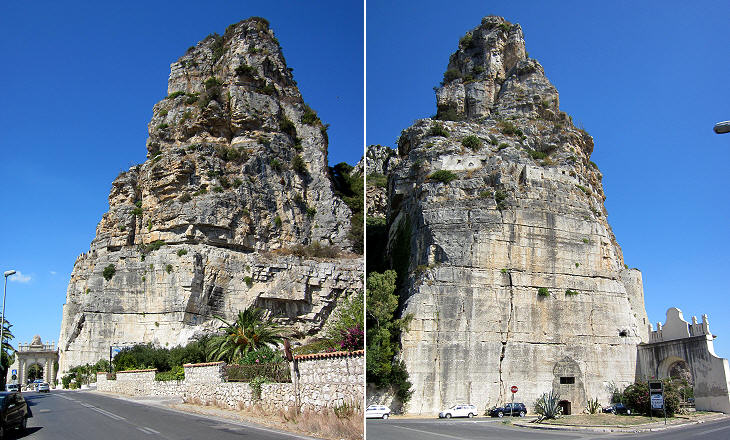 (left) Pisco Montano and Porta Napoletana seen from the road to Naples; (right) the side of Pisco Montano which was cut. You may wish to see Pisco Montano from Grotta di Tiberio at Sperlonga

Pisco Montano, an isolated rock between Monte S. Angelo and the sea, was for centuries and until 1870 the southern end of the Papal State; in the customs offices near the gate at its foot, travellers cleared their papers before leaving the country and entering the Kingdom of Naples.
While our passports were being inspected at the last Roman guard post, I took a walk between the cliff and the sea and observed a wonderful effect: the dark rocks stood out sharply in the light of the moon, which also cast a vividly flickering beam upon the blue sea, stretching from the horizon to the scintillating waves on the shore. On the mountain top high above me in the dusky blue stood the ruins of Genseric's castle. (Tischbein to Goethe - Italian Journey - translation by W. H. Auden and Elizabeth Mayer).
The reason why Pisco Montano stands out sharply above the sea is that it was vertically cut at the time of Emperor Trajan in order to allow the passage of Via Appia along the sea. 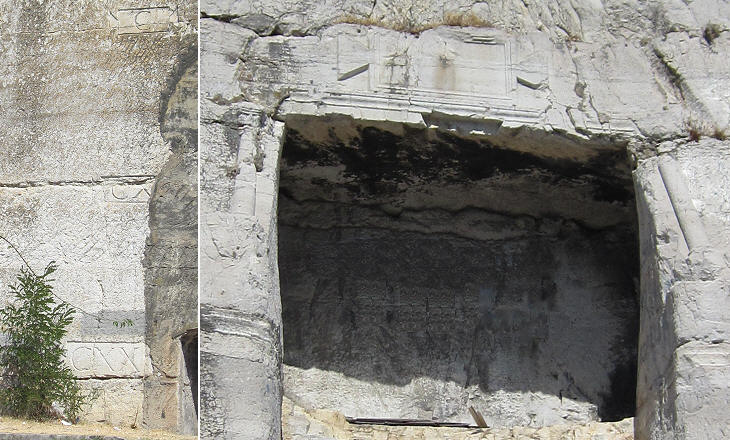 Pisco Montano; (left) inscriptions indicating the depth of the cut; (right) niche cut into the rock which housed an altar to the Sun

Prior to Trajan the route of Via Appia ran behind Monte S. Angelo; the need to shorten it by a couple of miles was unlikely to be so strongly felt to require a very dangerous and expensive undertaking as the vertical cutting of a rock for a depth of 120 Roman feet (36 metres); by the way Roman engineers could have more simply built a dam/quay at the foot of the rock along its natural contour.
The decision to cut Pisco Montano had therefore a more elaborate objective, than just shortening Via Appia. At the time of Trajan the might of Rome was at its peak; the Emperor wanted this might to be perceived, not just as a military power, but also as having a superior technological edge. With the help of his architect Apollodorus of Damascus, Trajan built a stone bridge across the Danube and he levelled a hill to make room for his forum in Rome; the cutting of Pisco Montano was meant to show the might of Rome to the many travellers who reached the city from the eastern provinces of the empire. The inscription indicating the maximum depth of the cut is larger than the others in order to elicit the admiration of travellers. 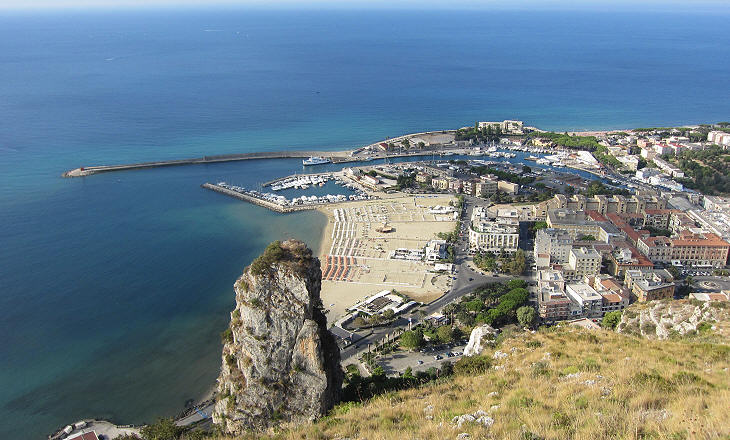 Pisco Montano and the site of the ancient harbour seen from Monte S. Angelo

Emperor Trajan provided Terracina with a new large harbour which was protected by a long curved wharf the location of which is still visible beyond a canal dug in the XVIIIth century; the construction of the harbour was accompanied by an enlargement of the town by the sea; an amphitheatre, baths and a series of streets have been identified in this area where modern Terracina now stands; the ancient buildings were not covered by floods or landslides and by remaining visible they were utilized as quarries; because of this their ruins are not particularly impressive. 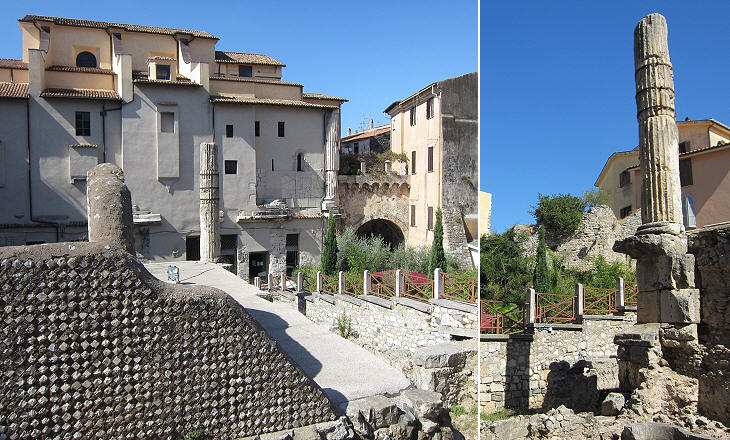 Capitolium: (left) view showing a wall in "opus reticulatum"; in the background the right side of the cathedral with an ancient column; (right) column of the temple to the Capitoline Deities (Jupiter, Juno and Minerva)

The ancient buildings on the hill were incorporated into medieval ones and their presence could only be guessed by a column or an ancient wall here and there. Beginning on September 4, 1943 Terracina was bombed several times with the objective of damaging road communication between Rome and Naples; a side effect of the bombings was that to reveal ancient structures inside medieval buildings. At the end of the war the rubble was cleared and to the right side of the cathedral a temple to Jupiter, Juno and Minerva, was identified; its three cells were built in opus reticulatum using two different stones in order to obtain a decorative effect. 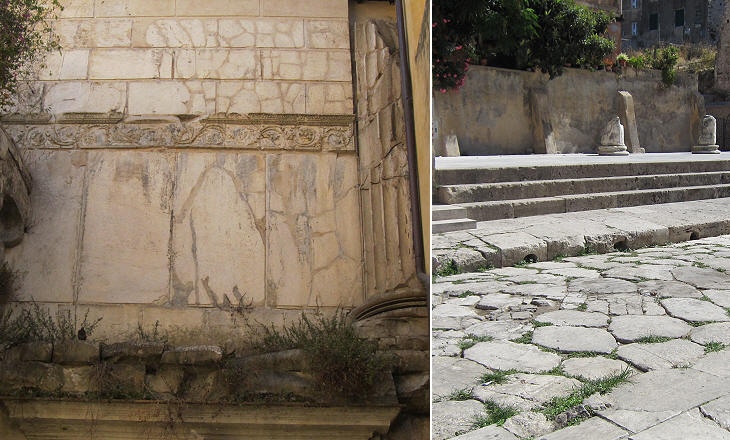 (left) Rear side of the cathedral showing parts of the Temple to Rome and Augustus; (right) Via Appia in Foro Emiliano, now the main square of Terracina

The largest temple of Roman Terracina was dedicated to Rome and Augustus and it stood alongside the urban section of Via Appia. The cell of the temple was decorated with marble panels and friezes a detail of which can be seen in the image used as background for this page. 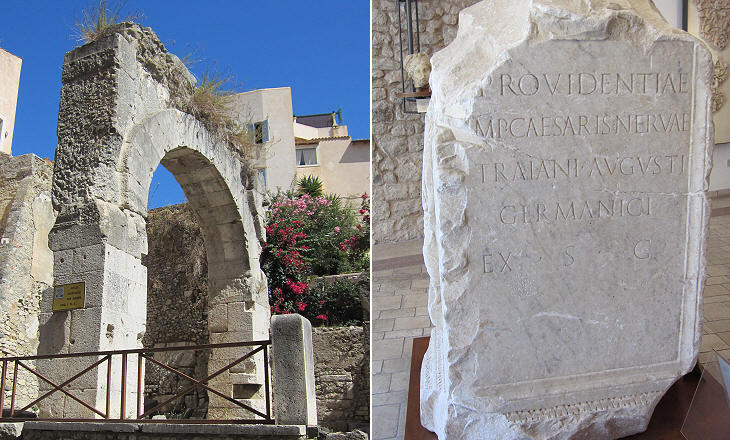 (left) Triumphal arch at the southern entrance to Foro Emiliano; (right) dedicatory inscription to Emperor Trajan celebrating his many actions in favour of Terracina

The Temple to Rome and Augustus was the main building of a forum named after Aulus Aemilius, a local wealthy man; the access to it was preceded by a triumphal arch having four sides one of which was discovered inside a destroyed medieval building.
The modern Town Hall of Terracina houses a small museum with statues, reliefs and inscriptions of the Roman period; among them an altar to Emperor Trajan bearing an inscription celebrating his many actions in favour of the town; considering that the names of deceased emperors were preceded by divus or divo or divi according to the case, it is possible that references to the providence of divine emperors stimulated St. Augustin's thought on Divine Providence. 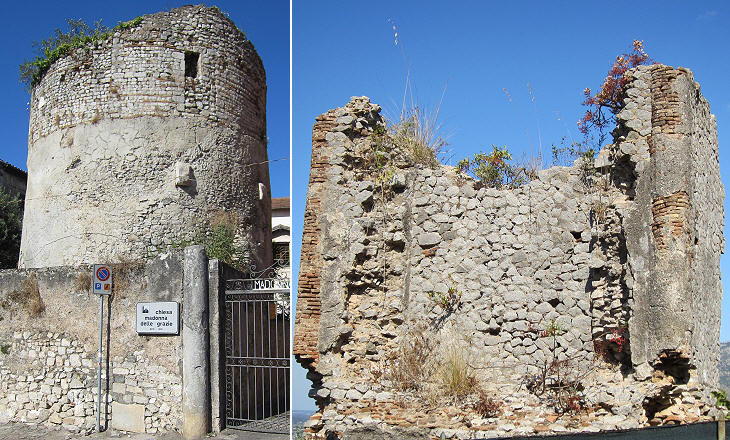 Terracina continued to flourish through the IInd century AD; the construction in 198 by Emperor Septimius Severus of Via Severiana which linked the town to Ostia and Portus with a route along the sea indicates that Roman engineers were able to keep the development of swamps in the large coastal plain under control.
Similar to what Romans did along the section of Via Appia near the city, the wealthiest inhabitants of Terracina built their tombs along Via Appia or along the road leading to Monte S. Angelo. 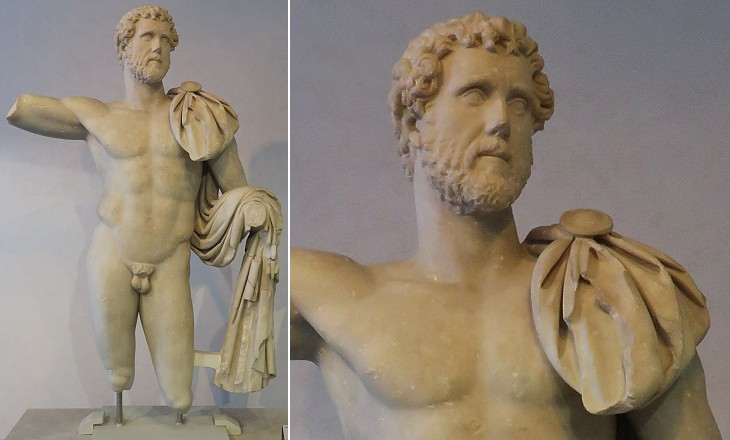