- Palestrina: Fortuna Primigenia Shrine
(detail of a fresco at S. Onofrio; this page is also part of Giuseppe Vasi's Environs of Rome description)

You may wish to read a general description of Palestrina first. 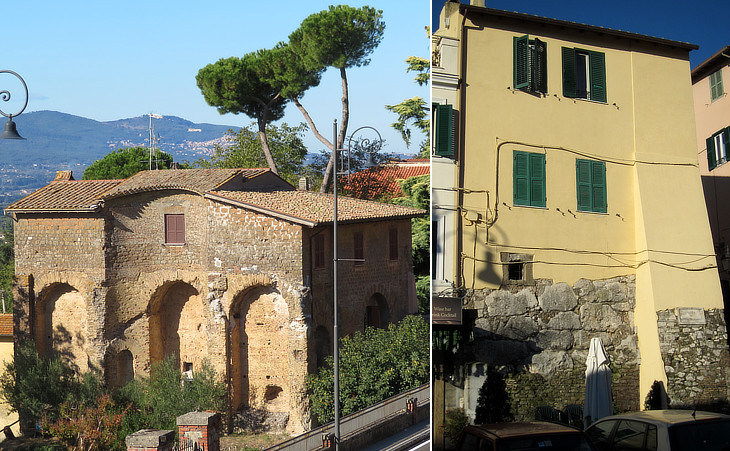 Ancient structures in a medieval building at the foot of the sanctuary; (right) "Colossal" walls, similar to those at Segni, Ferentino and Alatri in the upper part of the town

Praeneste dominated the Campagna far and wide, until it was laid low by the Romans. In later times it is often named in history. Pyrrhus took possession of the town, and halted there before marching on Rome. Praeneste fared even worse in the days of Silla, when the young Marius strove to defend himself within its walls. When Sulla had taken the stronghold, after a strenuous siege, he killed every inhabitant of the place, planting his veterans in their dwellings. Gregorovius
In 388 BC Praeneste, today's Palestrina, was conquered by the Romans; subsequently the town experienced a long phase of development which was interrupted in 82 BC when Silla punished its inhabitants. He founded a colony on the plain at the foot of the hill where Praeneste stood. During WWII Palestrina was bombed and this led to unearthing some of the structures of Silla's town inside medieval buildings and some very ancient walls. 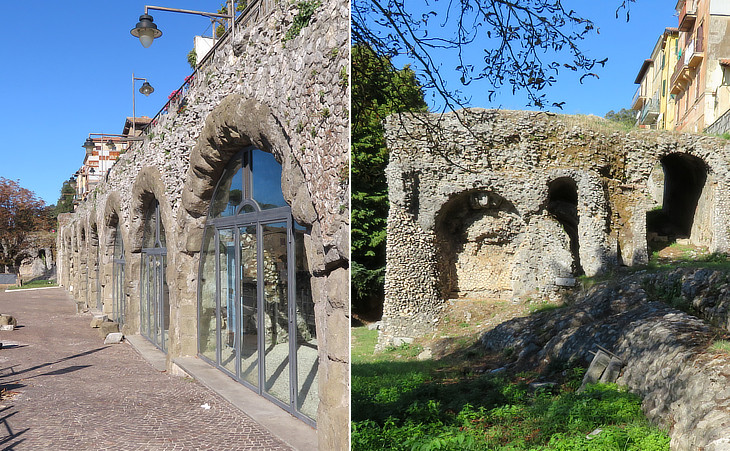 A nymphaeum on the first terrace

Silla enlarged the Temple of Fortune with such magnificence that this abode of the gods, once the most famous temple in all Latium, covered the whole of the ground now occupied by the present town, which is built on its foundations. Gregorovius
According to Cicero, Praeneste was the site of a sanctuary known for its very old oracle; archaeologists are uncertain about the date of its construction: IInd century BC or in conjunction with the foundation of the new town by Silla; during the Renaissance the Italian architect Palladio drew a reconstruction of the ancient sanctuary in which also the lower terraces were part of it; today archaeologists tend to believe that these terraces and their buildings and monuments were part of the town, although their design was consistent with that of the sanctuary. 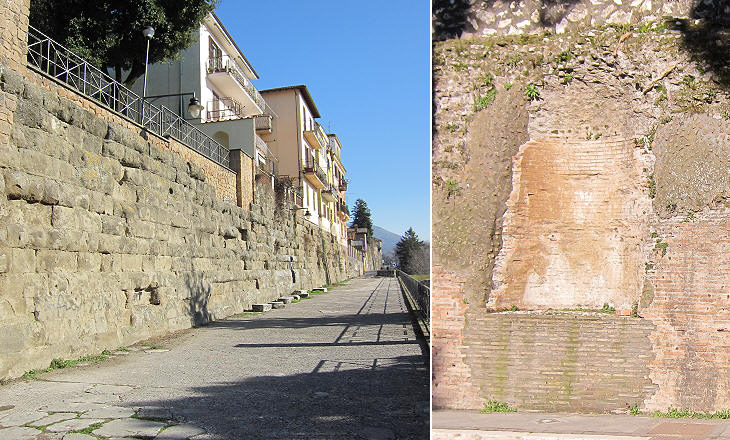 (left) Walls supporting the third terrace in "opus quadratum"; (right) a brick wall in "opus latericium" forming a niche which was added to the structure supporting the first terrace

Praeneste is a living catalogue of the construction techniques developed by the Romans; initially they relied on the careful alignment of rectangular stones, but later on they developed an advanced technology in the use of fired bricks and mortar. 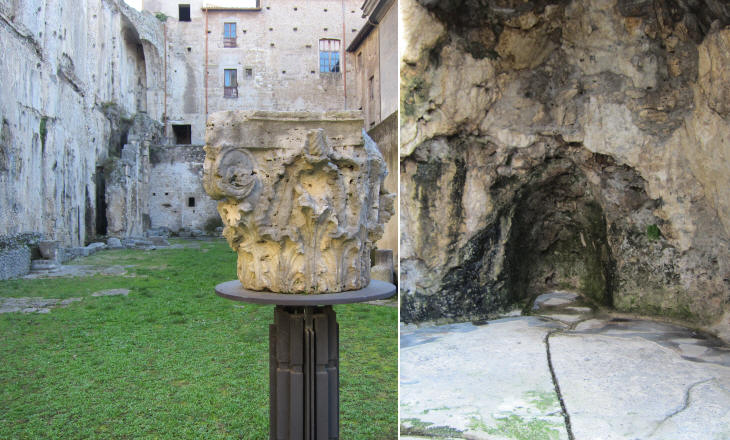 According to Cicero, Numerius Sufficius, an important man from Praeneste, was told in a dream to search for an oracle; he found some tablets which were engraved with letters of the alphabet; they were probably tossed or picked by random and the priests of the sanctuary based their oracles on the association of the letters; an artificial grotto which enlarged a small natural cave and which is located at the foot of a high wall behind the cathedral was thought to be Antro delle Sorti, the site where the oracle was announced. 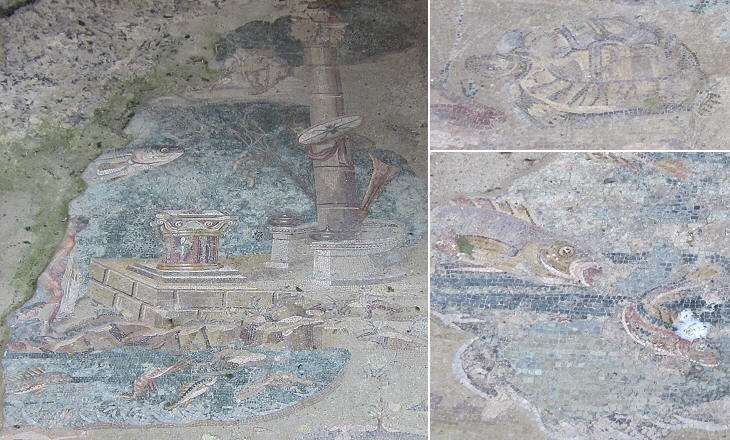 Details of the mosaic of Antro delle Sorti

Today archaeologists believe the grotto was part of a fountain which decorated the forum of Praeneste; they have reached this conclusion after they unearthed fragments of a very fine mosaic which decorated the grotto; its subjects do not seem in accordance with the site of an oracle; Romans were very fond of mosaics depicting sea subjects and they employed them for the decoration of fountains and baths. 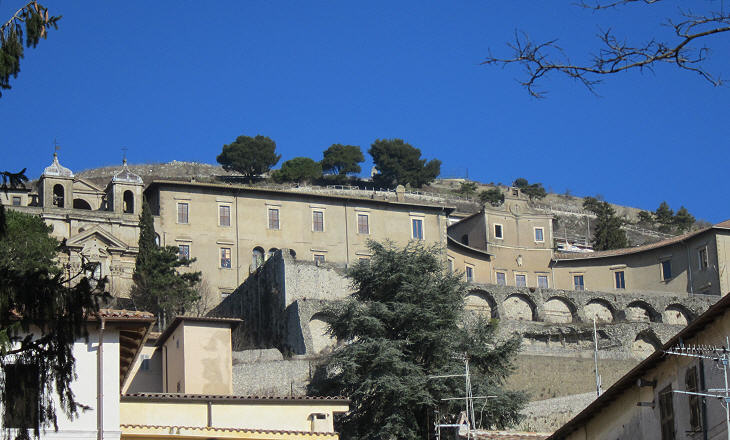 The bombs which fell on Palestrina in 1944 damaged many houses which had been built on the three upper terraces of the sanctuary; luckily they did not damage the palace built by the Barberini on the "theatre" which crowned the sanctuary. 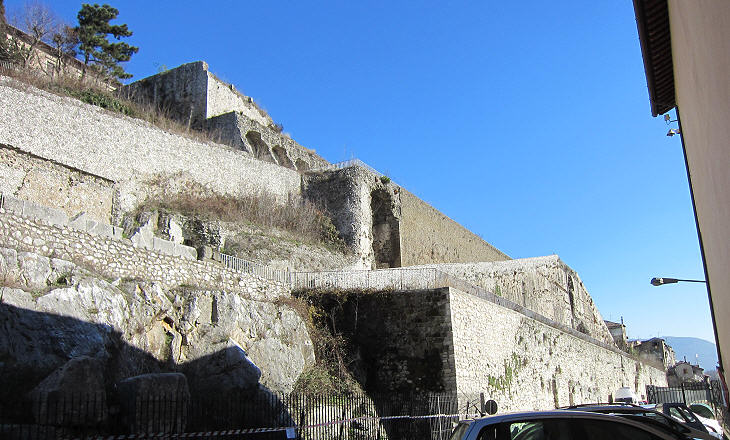 View of the upper terraces

After WWII authorities decided to remove the debris of the bombed buildings in order to unearth the structure of the sanctuary; its upper terraces are impressive and they prove the high technical skills achieved by Roman engineers. 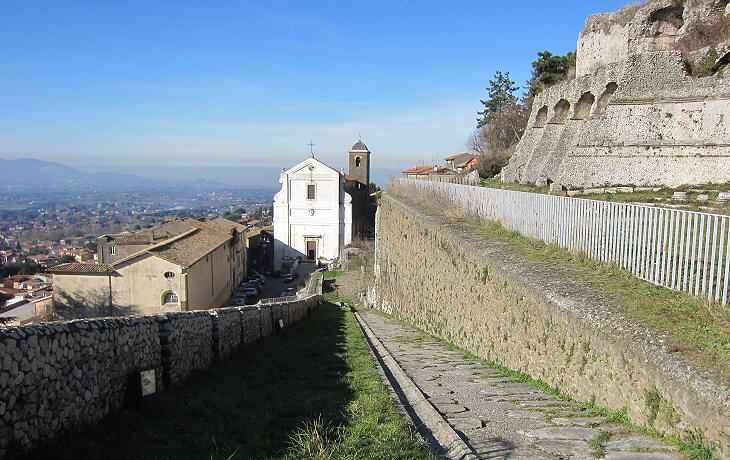 One of the two ramps leading to Terrazza degli Emicicli and S. Antonio

The width of the two ramps leading to Terrazza degli Emicicli indicate that ceremonies involved a large number of people; we can imagine the effect on watchers of processions reaching the top of the sanctuary and more so if we think of them by torchlight. 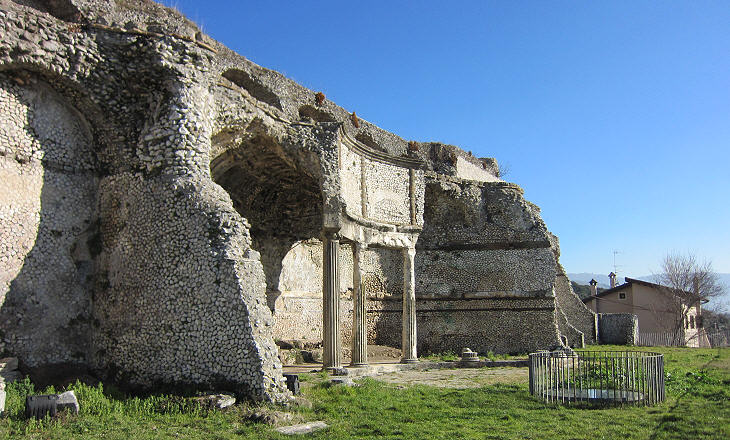 This terrace is named after two identical circular porticoes; one of them was preceded by a sacred well which might have been the place where the oracles were announced; archaeologists have found some analogies between the structure of this sanctuary and those of the Temple to Jupiter Anxur at Terracina. 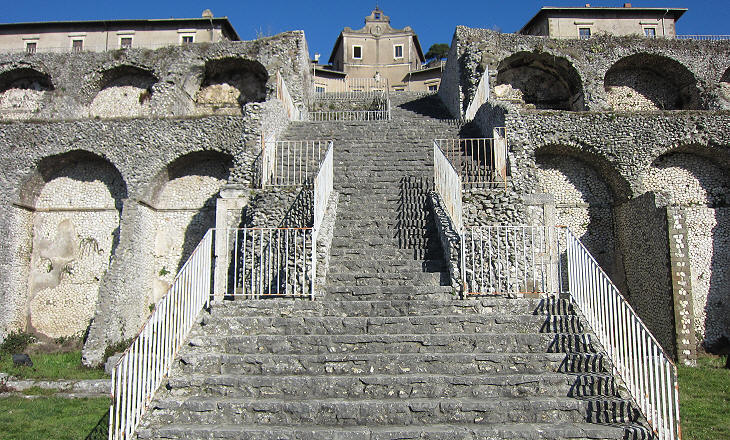 The walls supporting the last two terraces are marked by a series of vaulted niches which probably housed statues; their purpose was not merely a decorative one; Roman engineers were aware that curved structures such as arches and vaults were more able to support weight than traditional vertical walls. You may wish to see the Great Hemicycle of Mercati di Traiano. 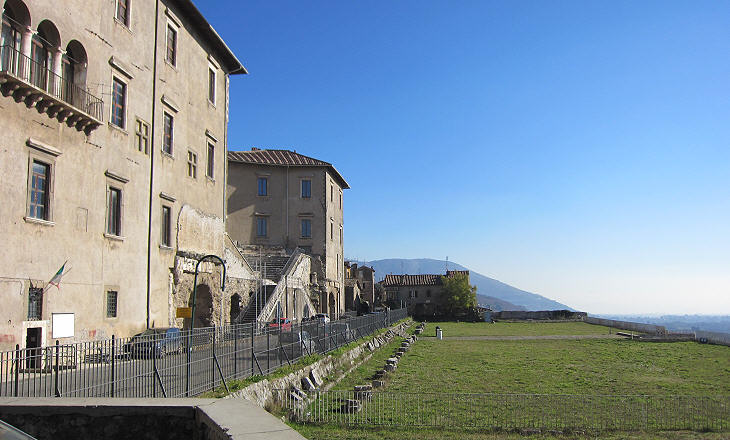 The final terrace was much wider than the other ones and it ended with a sort of theatre having on its top a small circular temple; the majesty of the buildings was increased by their being located in a commanding position and by the perfect symmetry of the whole structure. (left) Ancient structures inside Palazzo Barberini; (right) statue of Fortuna Primigenia (another one is shown in the image used as background for this page)

For the Romans Fortuna was the personification of luck; the appellation of Primigenia (first bearer) indicates that the original devotion to the goddess was part of the cult of Mother Earth; after the Roman conquest of Egypt Fortuna Primigenia took some features of Isis, the Egyptian goddess of motherhood, magic and fertility; this last aspect led to depicting the goddess holding a cornucopia, a symbol of abundance.
The sanctuary continued to be very popular until the IIIrd century, when the diffusion of Christianity and of new beliefs, e.g. Mithraism, reduced the appeal of the traditional cults. The sanctuary was most likely closed by Emperor Theodosius, but Fortuna continues to fascinate millions of gamblers. 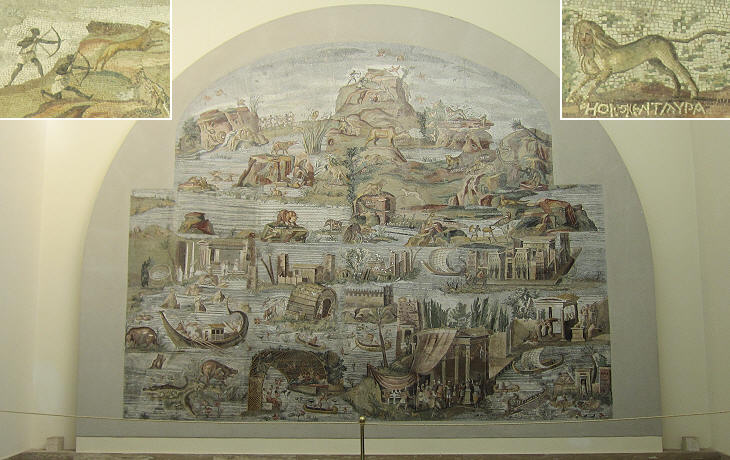 Mosaic of the Nile; (insets) details of its upper part

This splendid mosaic pavement, seems to be a fitting pendant to the, so called, Battle of Alexander at Pompeii. It represents scenes in the rural lives of the Egyptians, chiefly descriptive of their religious ceremonies, excellently treated as regards the grouping of the priests and priestesses, and the officiating attendants, of the warriors, fisher-folk, shepherded, and hunters who assist, and also as a presentment of Egyptian temples, country houses, and animals, all of which are admirably portrayed. It may be of later date than Silla, probably it belongs to the days of the Empire, possibly to Hadrian's reign. It was found in the ruins of the Temple of Fortune in the year 1638, where it had most likely decorated the floor of a recess or niche. The Barberini had it conveyed to their palace in Rome, but at the urgent petition of the municipality of Palestrina it was later on brought back to their town. Gregorovius
The fragments of the mosaic were assembled with the purpose of obtaining a meaningful and "nice to see" work of art; in the process some parts of the mosaic were lost and others were added.
The mosaic depicts the River Nile from its sources to its mouth; the upper part shows hunters and wild animals while the lower one depicts the delta of the river during a periodic flood. 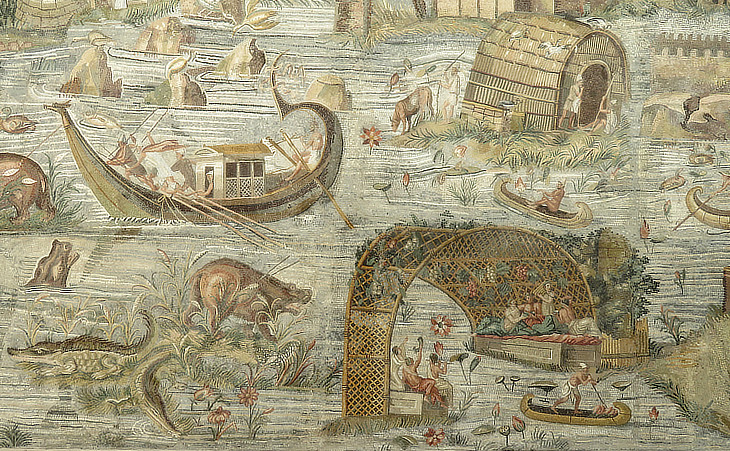 Mosaic of the Nile: Lower Egypt during floods with a possible depiction of Canopus, a canal/harbour which was a famous landmark of Alexandria

Archaeologists hold different views on the date of the mosaic which varies from the time of the Roman conquest of Egypt to the IIIrd century when the fashion for large coloured mosaics was at its apex. 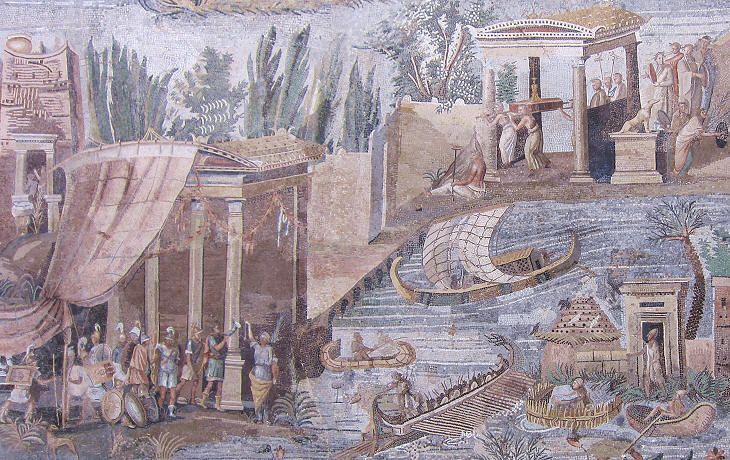 Mosaic of the Nile: a possible depiction of the Temple to Serapis and other buildings of Alexandria

Similar to Tivoli Praeneste was chosen for its salubrity as a location for summer residences by emperors and wealthy members of the Roman society; in a villa some two miles south of the town, a bust of Antinous was found and this has led to believe that it belonged to Emperor Hadrian.
Some archaeologists have assumed that the actual presence of Hadrian in Praeneste supports the opinion that the Mosaic of the Nile was made at his time because it shows Egyptian monuments which the Emperor so greatly admired that he gave their names to parts of his villa at Tivoli, e.g. Canopus 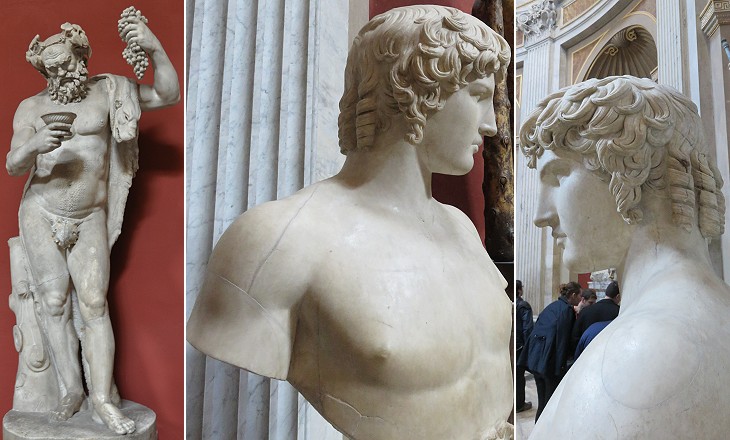 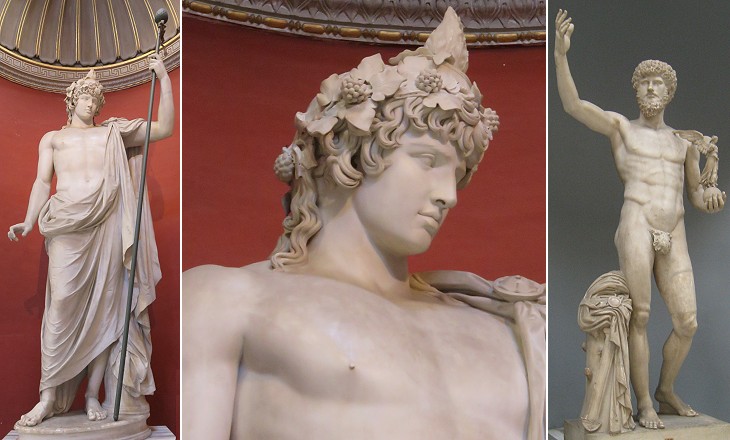 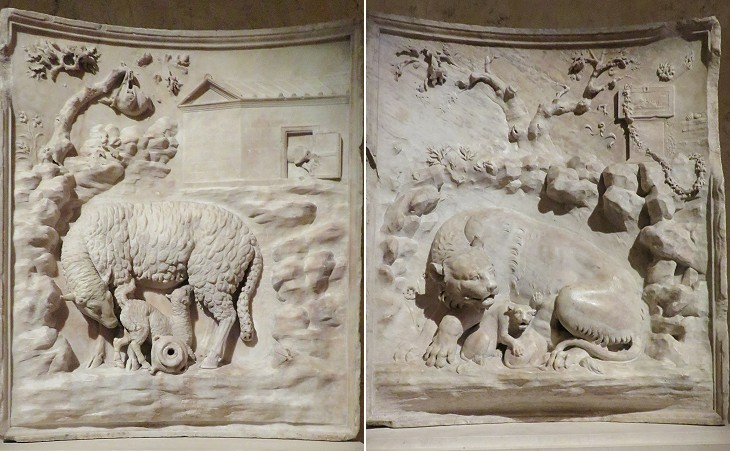 Kunsthistorisches Museum in Vienna: "Grimani reliefs", two panels of a Roman fountain found at Palestrina which belonged to the collection of the Grimani, a Venetian noble family who had properties in Rome

Return to Palestrina - page one