Bracciano
(detail of a fresco at S. Onofrio)

In May 1870 Ferdinand Gregorovius, a German historian best known for his studies on medieval Rome, visited Bracciano and its castle with two friends. He wrote a short account (Das Schloss der Orsini in Bracciano) about his visit for a German paper. The account starts with a description of Via Clodia, the road he followed to reach Bracciano. Via Clodia branches off Via Cassia at Madonna di Bracciano, a few miles north of Rome and rejoins it near Capranica after having bordered the western side of Lake Bracciano. 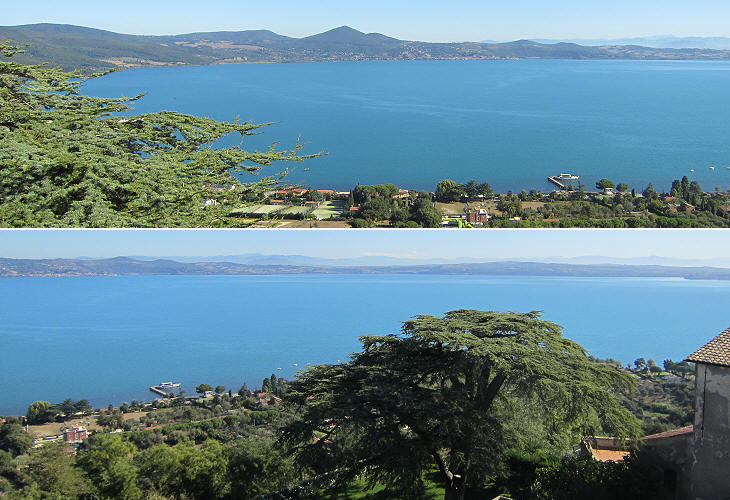 Views of Lake Bracciano from a tower of the Orsini Castle: (above) northern shore: Monte di Rocca Romana at the centre and to its right Trevignano; (below) eastern shore: far left Trevignano and far right Anguillara

On his way to Bracciano, Gregorovius was struck by the desolation of the countryside which he found to be in sharp contrast with the beauty of the lake; the area was plagued by malaria because of marshes near the lake shores.
Lake Bracciano is of volcanic origin and the low mountains which surround it are the remnants of a crater ridge. Three small towns (Bracciano, Trevignano and Anguillara) are located at approximately the same distance one from the other along its coast. 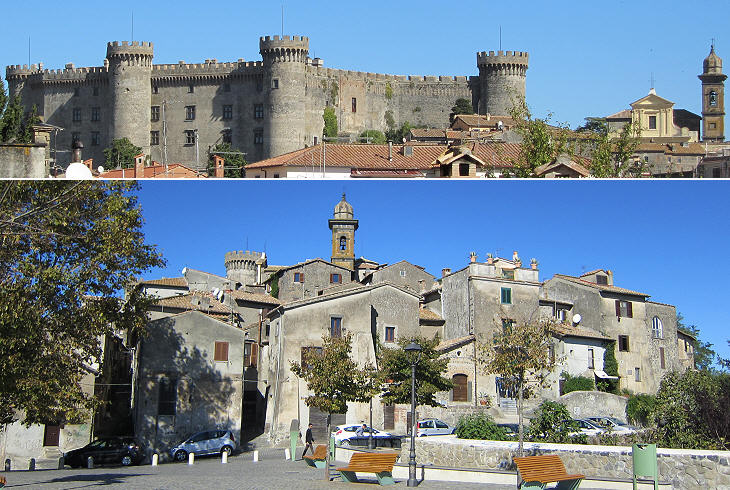 (above) View of the Orsini Castle from modern Bracciano; (below) old Bracciano with its small houses grouped around the castle and the main church

In his pages devoted to Genazzano and other little towns south of Rome, Gregorovius made several references to the Colonna family; in this account he provided his readers with information about their rivals: the Orsini, whose possession of Bracciano he traced back to the year 1234. In 1419 Pope Martin V Colonna (1417-31) confirmed the Orsini rule over Bracciano and Anguillara.
In the second half of the XVIth century the Orsini increased their power by establishing family bonds with the Aragonese rulers of Naples and with the Medici of Florence (in 1469 Clarice Orsini married Lorenzo de' Medici, the de facto ruler of the Republic of Florence). 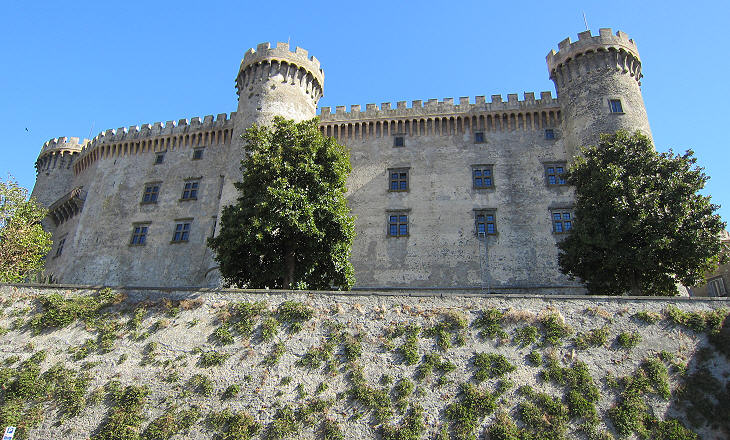 The front of the castle towards Bracciano

Bracciano is dominated by the castle built between 1470 and 1485 by Napoleone Orsini and his son Gentile Virginio. They enlarged a previous fortification built by the Prefetti di Vico, a family who had several fiefdoms between Lake Bracciano and Lake Vico (in the background of this page you can see the coat of arms of the Orsini on one of the gates).
In 1492 the Orsini favoured the election of Pope Alexander VI Borgia, but this did not prevent the new pope from planning to provide his sons with fiefdoms belonging to the Orsini. In 1497 Giovanni di Gandia, a son of the Pope, repeatedly attacked the castle, but the Orsini repelled the assailants as they did again a few years later when Cesare Borgia, another son of the Pope, made an attempt to take the castle. 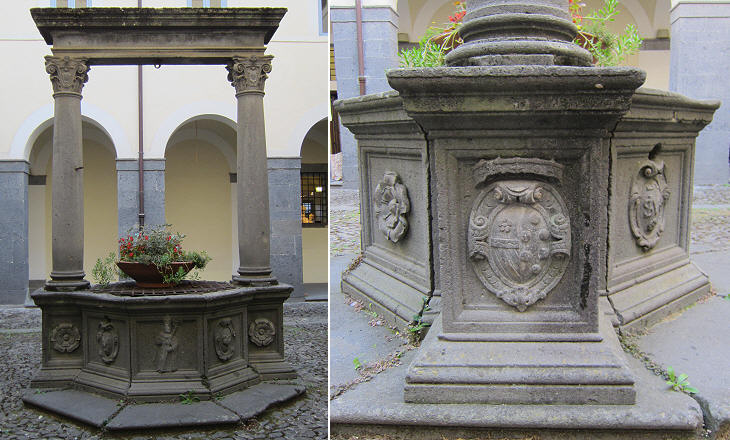 The Orsini were favoured by Pope Leo X, son of Lorenzo de' Medici and Clarice Orsini and they maintained close ties with the Medici. Family bonds were strengthened in 1553 when Isabella de' Medici, daughter of Duke Cosimo I was promised in marriage to Paolo Giordano Orsini. The actual wedding took place in 1558 when Isabella was sixteen and Paolo Giordano seventeen; for the occasion the castle and other monuments of Bracciano were decorated with the combined coats of arms of the Orsini (a rose above diagonal stripes) and of the Medici (six pills or balls).
Gregorovius knew that his readers were fond of love and death stories and to please them he briefly described the dramatic life of the couple. They usually lived at a Medici villa at Cerreto Guidi, between Florence and Pisa. Paolo Giordano Orsini was often away and in 1571 he fought bravely at the Battle of Lepanto. In 1576, having heard rumours about the unfaithfulness of Isabella, he did not hesitate to strangle her (or to have her strangled by a friend); the murder however was formally recorded as due to natural causes and Paolo Giordano left Tuscany and returned to live in Bracciano. 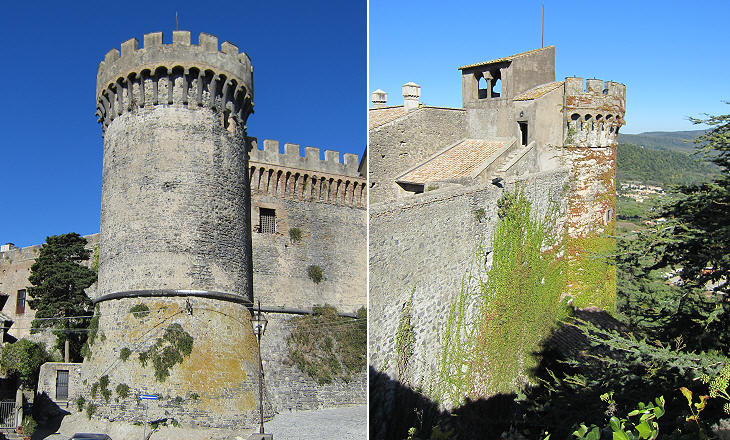 Towers of the castle

In 1583 Paolo Giordano fell in love with Vittoria Accoramboni, wife of Francesco Mignucci, nephew of Cardinal Felice Peretti. One night Francesco Mignucci received a request for help from one of his brothers-in-law and accompanied by a servant he left home: he was caught in an ambush near Monte Cavallo and killed.
A few days after the funeral, Vittoria Accoramboni and her mother left Rome and went to live with Paolo Giordano Orsini in Bracciano. All evidence, including the confession of one of the hired assassins, indicated Paolo Giordano to be the commissioner of the killing, but Pope Gregory XIII (1572-1585) did not dare to prosecute an Orsini, although he annulled two secret marriages between Paolo and Vittoria. 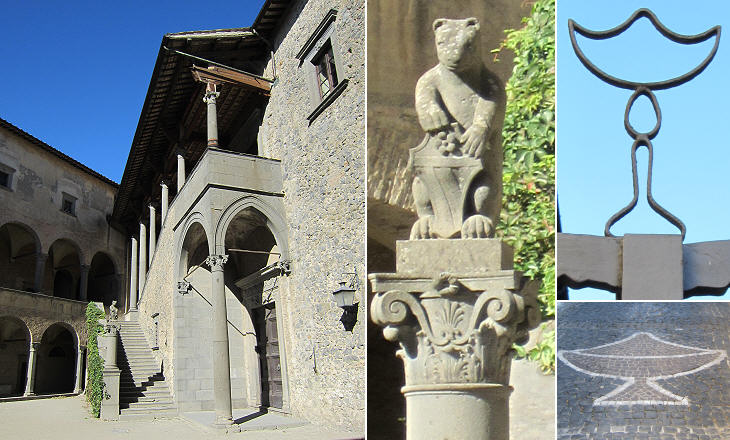 At the death of the Pope in April 1585 Paolo Giordano Orsini decided that he could marry Vittoria: the wedding took place the same day the cardinals elected the new pope: their choice fell on Cardinal Felice Peretti who became Pope Sixtus V.
Paolo Giordano Orsini asked for a private audience with the Pope, during which he professed his loyalty to him. Pope Sixtus V reassured him: whatever offence he had perpetrated against Cardinal Peretti was forgiven, but no offence against him as a pope would be tolerated, such as giving asylum to criminals in the fortress of Bracciano.
Because of the ambiguity of this last sentence Paolo Giordano Orsini preferred to leave Bracciano with his wife taking as an excuse the need to cure himself at Abano, a town known for its mineral springs near Padua in the Republic of Venice. He died in November 1585, perhaps poisoned by order of his brother-in-law Francesco de' Medici who probably feared that the new marriage could endanger the rights of Virginio, son of Isabella.

In his will Paolo Giordano Orsini left a small fortune to his wife to the detriment of other members of the family. Vittoria did not have time to spend her money: the night of Christmas Eve her residence in Padua was assaulted by a gang of assassins hired by the Orsini and Vittoria was stabbed to death. 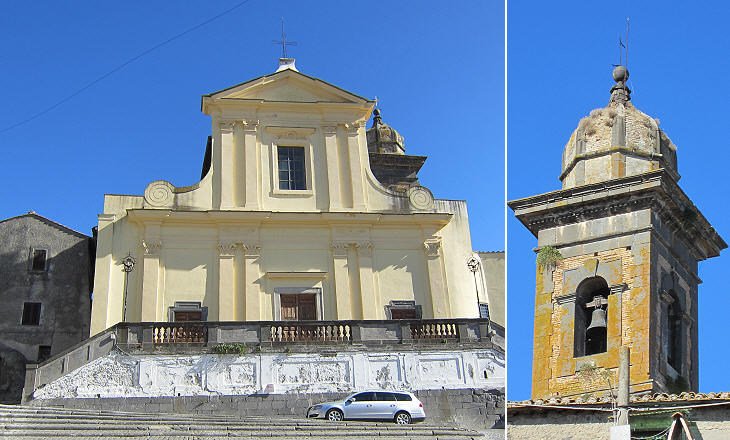 Collegiata and its bell tower

Virginio Orsini is remembered for having enlarged the church adjoining the castle and for having rebuilt its bell tower; in 1607 he inherited the fiefdom of Vicovaro from another branch of the Orsini. He maintained good relations with the Medici and some of his children were educated in Florence (you may wish to see their portrait by Tiberio Titi, a Florentine painter - it opens in a separate window); his son Alessandro became a cardinal and is remembered for having been a patron of Galileo. 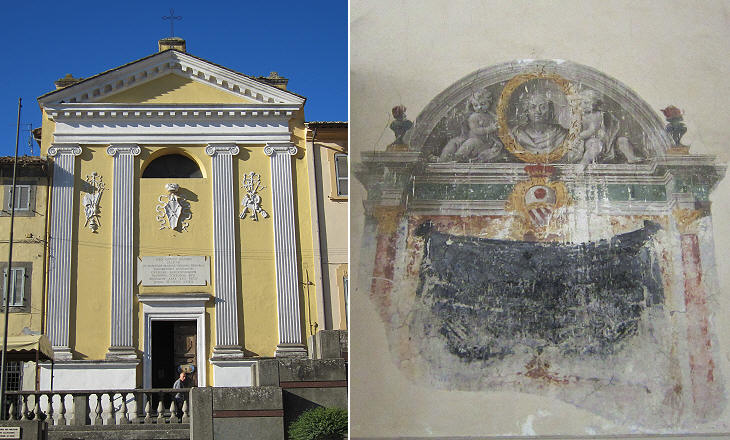 (left) S. Maria della Visitazione; (right) fresco in the interior with the portrait of a member of the Orsini family

Flavio Orsini was the last of the Orsini of Bracciano; he promoted the construction of a nunnery of the Poor Clares which was closed in 1800. The building was abandoned until 1834 when it was restored with the financial help of the Torlonia, who between 1803 and 1848 replaced the Odescalchi as Dukes of Bracciano. Because of their enormous wealth Gregorovius called them the Rothschilds' of Rome. 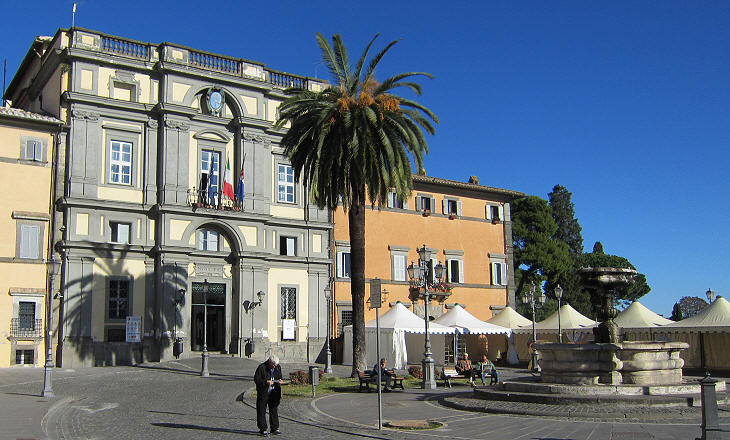 Town hall and the Odescalchi fountain

The Odescalchi are still the owners of the castle (they own other castles along Via Aurelia, not far from Bracciano); they have furnished it with pieces of the XVth and XVIth century; two halls house a collection of medieval and Renaissance weapons; the castle is regularly open for guided visits and it occasionally houses special events, including weddings. Move to: Trevignano and Anguillara