- Palestrina
(detail of a fresco at S. Onofrio; this page is also part of Giuseppe Vasi's Environs of Rome description)

In summer 1856 Ferdinand Gregorovius spent three months in the small town of Genazzano; he described his stay there and in other nearby towns in Aus der Campagna von Rom (About the Roman Campagna); he started his account by describing the itinerary he followed to reach Genazzano; he left Rome at Porta Maggiore and took Via Labicana (today usually referred to as Via Casilina) along which he saw the arches of ancient Roman aqueducts; he then reached San Cesareo on the slopes of the Alban hills, a location notorious for the brigands' assaults on the stagecoaches which used this route. He then passed near Colonna and Zagarolo, two small towns which were fiefdoms of the Colonna before being sold to other families. 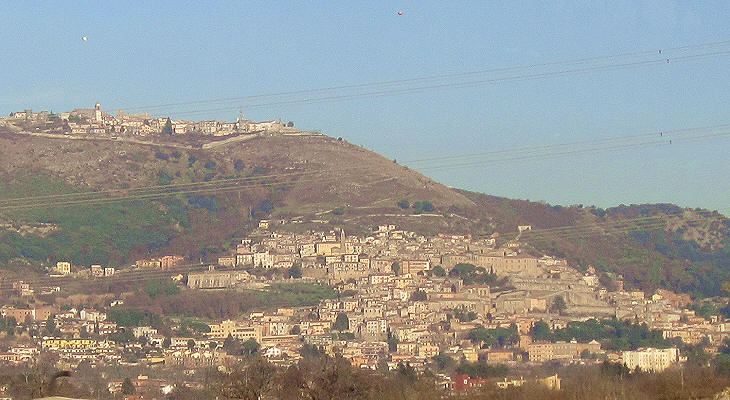 View of Palestrina (below) and Castel S. Pietro (above)

After a few miles, we reach the town of Palestrina, the old and renowned Praeneste of the Romans, where still, to a certain extent, the streets retain their ancient polygonal pavement. Here we must surely rest for a space. My readers would blame me if I passed through so old and memorable a spot with only the mention of its name. But I pledge myself to be brief. Praeneste - whose grandchild Palestrina now lies before us, a grey mass of houses set on the declivity of a limestone mountain - was once the mistress of Latium, older than Alba Longa, older, far, than Rome. Her Cyclopean walls bear witness to this. They rise above the present town in two concentric rings to fortify the arx, or citadel, crowning the mountain top; so inaccessible does it appear as to be almost impregnable. Gregorovius
At Colonna Gregorovius started to see Palestrina, the ancient Praeneste, a town which was conquered by the Romans in 338 BC; it was composed of an acropolis at the top of a hill and of a lower town at its foot; the two were protected by massive walls; the lower town housed the sanctuary of Fortuna Primigenia, a famous oracle; during the Middle Ages Praeneste split into two separate small towns: the acropolis became Castel S. Pietro, while the site of the sanctuary was turned into a walled town which retained the old name, although it was modified into Palestrina (a separate page covers the history and the monuments of the ancient town). 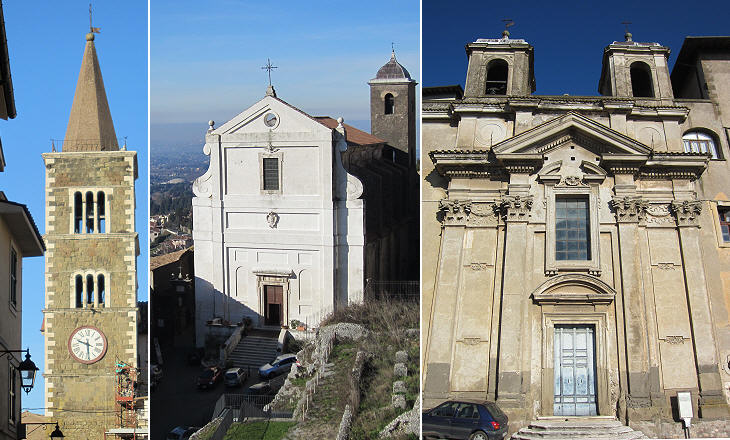 A deed of gift exists, dated 970, by which Pope John XIII confers this Palestrina, in fief, on the Senatoress Stefania. Her granddaughter Emilia married the possessor of Colonna in 1050, and their son was possibly that Pietro de Colonna from whom the Colonna lordship of Palestrina may date. So much, at least, is indisputable, that this family was powerful in that district early in the twelfth century, their possessions reaching from the Latian to the Volscian Mountains, as well as to the territories of the ancient Aequi and Hernici. Gregorovius
The power of the Colonna was challenged by the Caetani of nearby Anagni; both families exerted great influence on the Roman Church; at the conclave of 1294 two Colonna cardinals were unable to prevent the election of Cardinal Benedetto Caetani who became Pope Boniface VIII.
Pope Boniface VIII, the bitter foe of the Colonna family, took this, their chief town, from them by force of arms in 1298, or, possibly, the two Cardinals of that family, Jacopo and Pietro, who had entrenched themselves there, may have delivered it up to him without awaiting the bursting of the storm, whereupon that furious Pope tore down the walls and the houses of the town, (..) strewing salt over the ruins, and causing a ploughshare to be passed through its soil.
This explains why the bell tower of the cathedral is almost the only monument of the old medieval town. 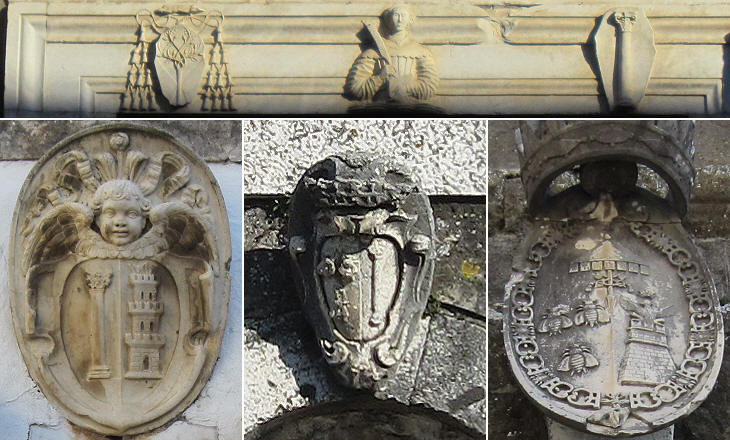 (above) Coats of arms of Cardinal Girolamo Basso della Rovere, nephew of Pope Sixtus IV (left) and of the Colonna family (right) on the lintel of the cathedral (in the centre St. Agapitus, the patron saint of Palestrina); (below-left) c.o.a. of Cornelia Baglioni Colonna at Chiesa dei Cappuccini; (below-centre) c.o.a. of the Barberini and Colonna family on the façade of Palazzo Barberini; (below-right) c.o.a. of Prince Maffeo Barberini and his wife Olimpia Giustiniani, a relative of Pope Innocent X on a side entrance to Palazzo Barberini

But Palestrina rose again from her ashes, only to be a second time destroyed. This destruction happened in 1436, when the patriarch Vitelleschi, at war with the Colonna, sacked the town and levelled even the cathedral with the ground. Two years later the fortress on the summit of the mountain was also demolished. Gregorovius
In 1448 the Colonna returned: the decoration of the lintel of the cathedral indicates that they were on good terms with the Della Rovere family; in 1630 the Colonna sold Palestrina to Carlo Barberini, brother of Pope Urban VIII; his son Taddeo was given the title of prince by the Pope. Many monuments of the town bear the coats of arms of these two families. 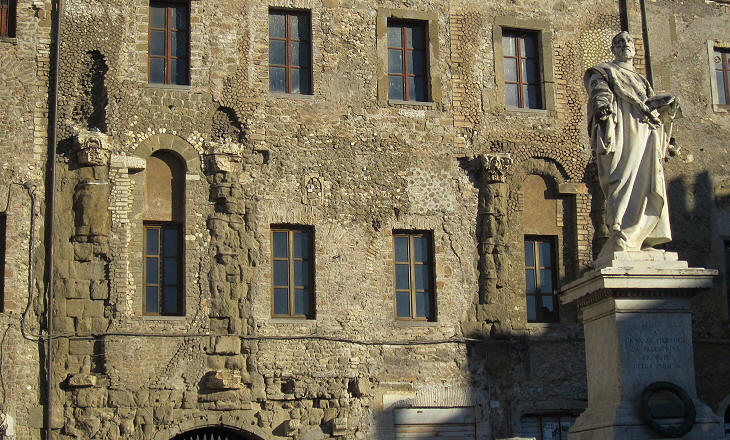 Monument to Giovanni Pierluigi da Palestrina (1525-1594) by Arnaldo Zocchi (1921) and behind it the former seminar which incorporated "Sala Absidata", an ancient building inside which fragments of a large mosaic were found during the XVIth century (see page two)

It is uncertain whether Pierluigi da Palestrina was actually born in the town; at the beginning of his career he held the post of organist at the cathedral and he married a woman from Palestrina. He became the most acclaimed composer of his time and he enjoyed the protection of popes of very different views; one of his best known works is Missa Papae Marcelli, a mass dedicated to Pope Marcellus II. 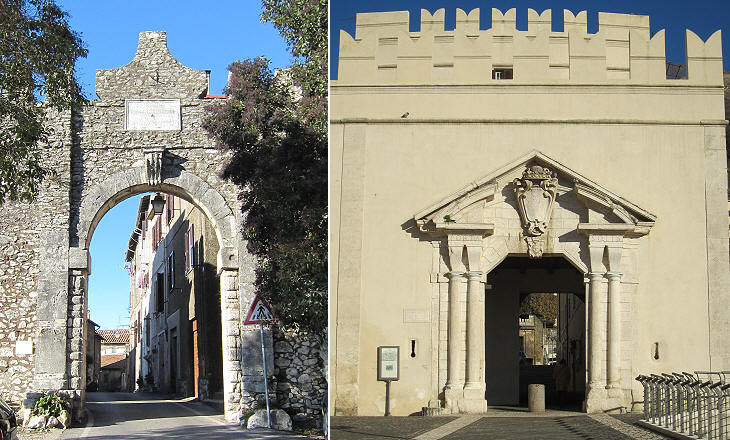 Palestrina retains its four old gates; they were all opened at a time when defensive needs were not paramount; the Barberini decorated one of the gates with a relief showing a radiant sun, one of their heraldic symbols, which eventually gave its name to the gate. 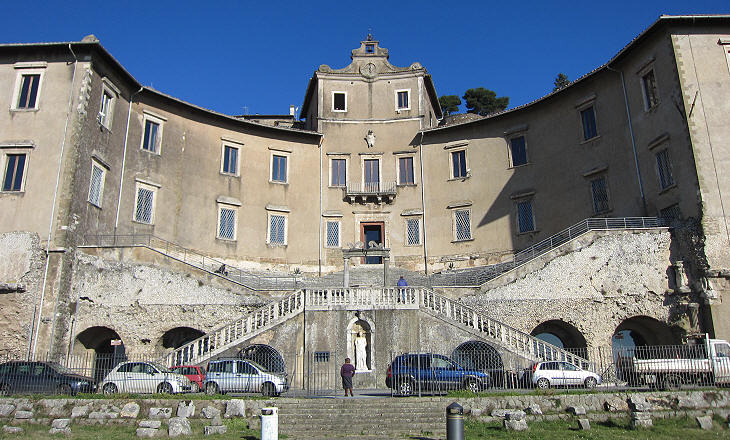 The town is built in terraces on the hillside; it looks dull and dingy till. (..) At the upper end of this is the Palazzo Barberini, a large, but now quite dilapidated, building in the Decorated style of the seventeenth century. It describes a semicircle, following the foundations of the Temple of Fortune erected of old by Sulla. In this huge baronial edifice, with its great walls, and halls, and arcades, there is absolutely nothing to note, except a splendid mosaic pavement. Gregorovius
The ancient sanctuary was structured on a series of terraces; the highest one housed a sort of theatre with a small circular temple; the Colonna built their houses on the ancient structures; Prince Taddeo Barberini had these houses reshaped along the curved lines of the theatre; inside the palace it is still possible to see the location of the circular temple. 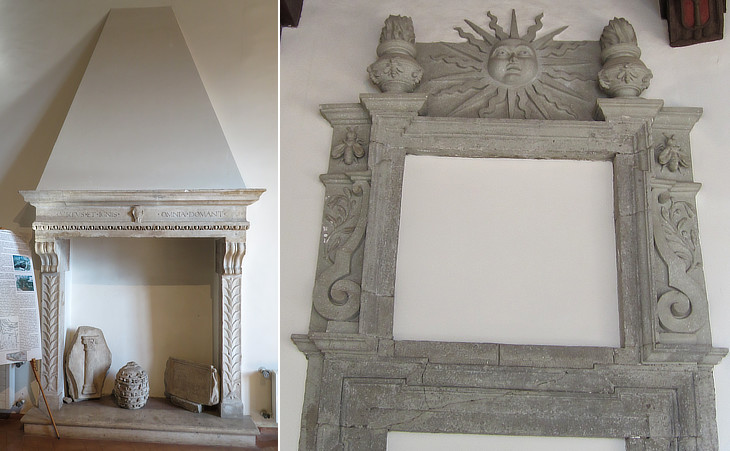 Palazzo Barberini - interior: (left) fragment of the frescoes which decorated the palace; (right) stone frame with the Barberini's heraldic symbols

In 1956 the palace was turned into a national archaeological museum (Museo Nazionale Prenestino) which displays reliefs, statues, mosaics and other exhibits found at Palestrina; prior to this change the building was abandoned for a very long period and it retains only small parts of its XVIIth century decoration. 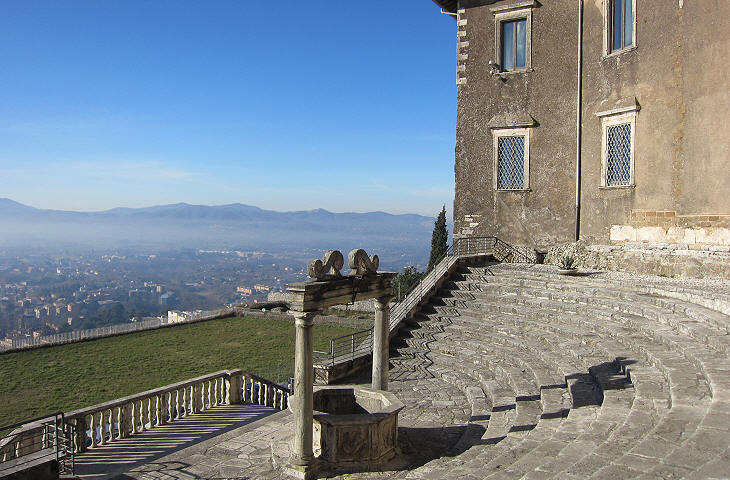 Renaissance well and view of the Castelli Romani from Palazzo Barberini

What distinguishes the palace yet more than this ancient work of art is its incomparable position on an acclivity, where fresh and balmy breezes always fan it, and the dwellers in its houses can enjoy a prospect the beauty of which is not to be expressed in words. (..) Looking upon this noble landscape, and up into the azure sky and clear air, it is easy to imagine that Palestrina was the birthplace of one of the greatest musical geniuses the world has known. Gregorovius
Gregorovius described the view from the palace: Rome to the north, some of the Castelli Romani and Segni to the west and Anagni and Ferentino to the south. 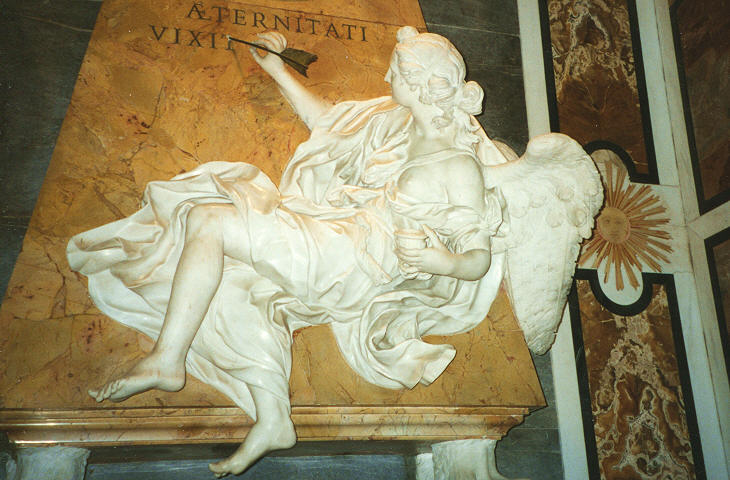 Monument to Cardinal Antonio Barberini by Bernardino Cametti in Santa Rosalia: the angel writes "aeternitati vixit" meaning that the Cardinal lived having in mind his eternal life

The Barberini built a small church near their palace, where several members of the family were buried; unlike the main building, the church fully retains its lavishly decorated interior, with two striking baroque monuments which show angels apparently floating in the air; the icon of this website is based on a detail of one of these statues.
Gregorovius made Palestrina popular among German readers and spending a summer in one of the towns described in his books became fashionable. Among others, Thomas and Heinrich Mann spent a summer in Palestrina in 1895 and 1897.
In the long vacation of 1912, I, with my young bride, visited Adrian and Schildknapp in the nest they had found in the Sabine Hills. It was the second summer the friends had spent there. They had wintered in Rome, and in May, as the heat strengthened, they had again sought the mountains and the same hospitable house where, in a sojourn lasting three months, they had learned to feel at home the year before. The place was Palestrina, birthplace of the composer; ancient Praeneste, and a citadel of the Colonna princes, mentioned by Dante in the twenty-seventh canto of the Inferno: a picturesque hillside settlement, reached from the church below by a lane of shallow steps, overhung by houses and not even of the cleanest. A sort of little black pig ran about on the steps, and one of the pack-mules that passed up and down with its projecting load might push the unwary pedestrian to the wall. The street continued on above the village as a mountain road, past a Capuchin friary, up to the top of the hill and the acropolis, only surviving in a few ruins and the remnant of an ancient theatre.
Thomas Mann - Doctor Faustus - 1949 translation by H.T. Lowe-Porter