- Cori
(detail of a fresco at S. Onofrio; this page is also part of Giuseppe Vasi's Environs of Rome description) 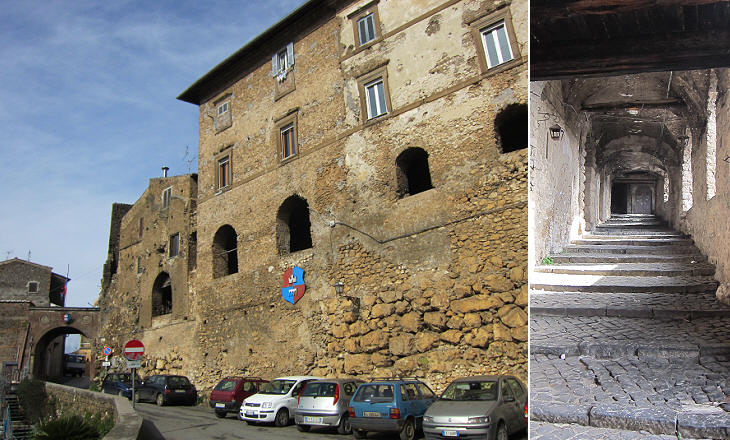 The next morning we hired mules to convey us from Norma to the ancient and renowned town of Cori or Cora. Here we arrived, after a hard ride of three long hours. A road leading to Cori traverses the level ground by Nympha; but we chose a shorter way across the Volscian Mountains, by a mountain path skirting the precipices, for the prospects from that higher route are wide and fine, extending all over the marshes, the sea, and as far as Rome, across the Campagna. The early freshness of daybreak, the clearest of September atmospheres, made this ride sufficiently enchanting, although the hills over which we were riding were uniform and lifeless, save where the shepherds had gathered in their flocks to milk the ewes, or to make cheeses over a fire, or were setting up their temporary huts made of branches of broom and heather.
Ferdinand Gregorovius - Aus den Bergen der Volsker -From the Volscian Mountains - 1860 - English translation by Dorothea Roberts.
Cori was the journey's final destination and Gregorovius and his friend reached it from Norma by a mountain road. The usual historical access was from Porta Ninfina, the southern gate of the town, where one sees a sort of summary of Cori's history: a) a sample of the ancient walls which supported the terraces above which the town was built; b) Sipportica, a covered medieval street, and c) Palazzo Chiari, a XVIIth century palace built on top of the Sipportica. 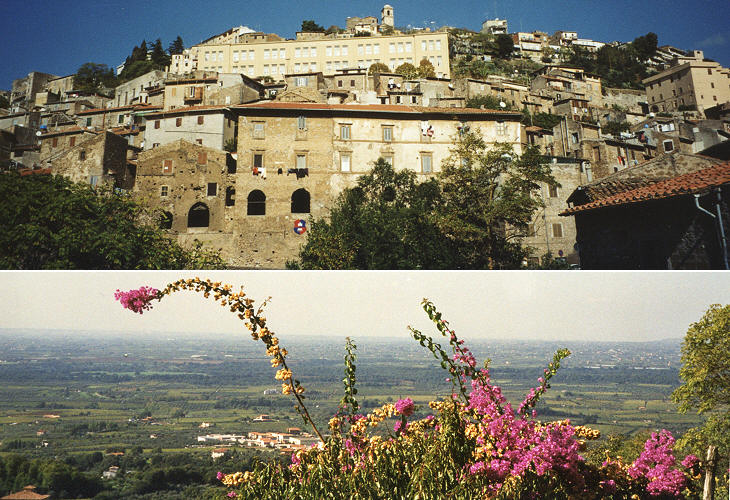 (above) View of Cori from Porta Ninfina; (below) the Pontine Marshes (now reclaimed) seen from Cori Monte, the upper section of the town

And there, set on its mountain, Cori lies before us, a pyramid of houses, high over them all those most beautiful remains of the temple of Hercules. At the foot of the hill are vineyards and olive woods. (..) As you look across this classic land of that Latian strand, (..) if you have any poetry in you, you will recall the people in Virgil's Aeneid, for this is the Roman Troy, the scene of the combats between the heroes in Virgil's great poem. Gregorovius

According to Virgil, Cori was founded by Choras, the son of a king of Argos, while his two brothers Catillus and Tiburtus founded Tibur (today's Tivoli). This legend is not the only one about the origin of Cori; they all have one point in common; they set the foundation of the town at a much earlier time than that of Rome. 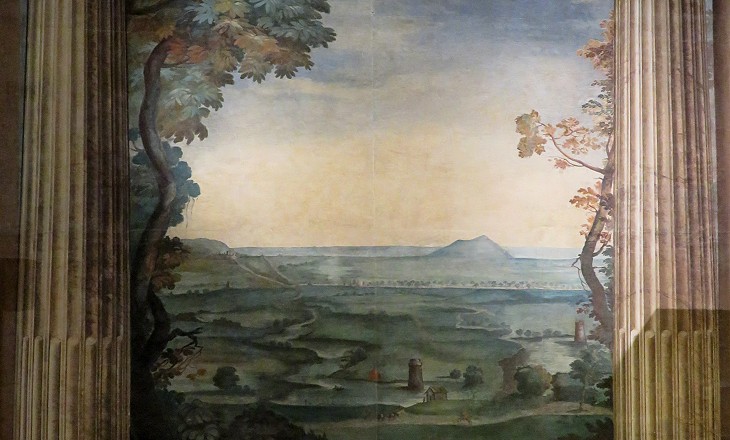 Gregorovius was fascinated by the view of the Pontine Marshes where Virgil set many events of Aeneid and he quoted other verses of the poem in his account: 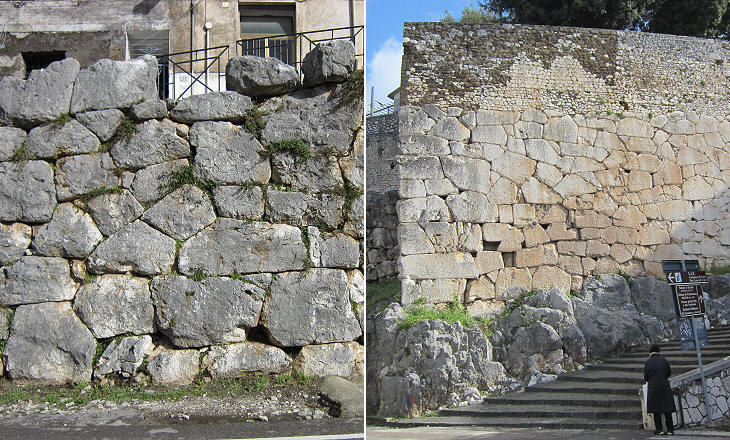 Sections of the polygonal walls

I will not fatigue the reader with the description of its ruins; but well do its Pelasgic or Cyclopean walls deserve his admiration. They are visible from many parts of the town, and have been compared to those of Mycenae or Tiryns. They support the Acropolis, the crowning pinnacle of the town. Gregorovius
Similar to other towns described by Gregorovius in this and other accounts (e.g. Alatri, Segni), Cori was protected by massive walls in opus poligonalis (polygonal masonry). Archaeologists have identified four types of such a masonry; those shown above belong to the third type which is characterized by stones which were cut, polished and aligned in order to obtain a smooth vertical surface. 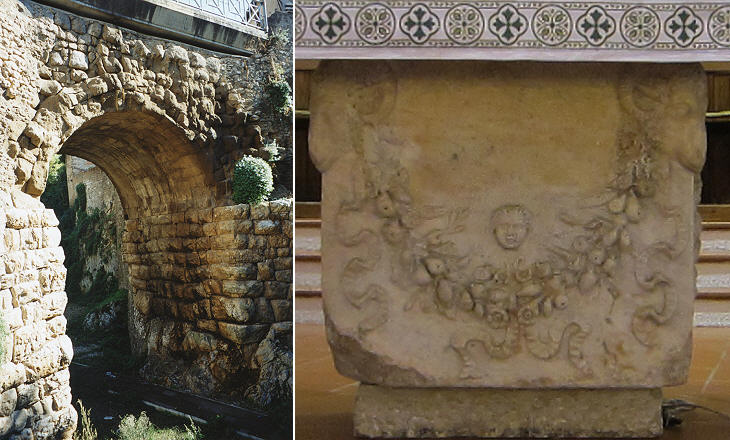 Remains of baths, of cisterns, a Roman bridge over the foaming mountain stream which rushes from the mountain side from Cora - these and other ancient relics of past glories will pleasantly occupy him who may care to search for them. Gregorovius
Ancient Cori was at times an ally or an enemy of Rome, but by the end of the IVth century BC it was controlled by the Romans; the monuments they built in Cori are mainly of the late Republican period, so historians believe the town lost importance during the time of the Roman Empire. 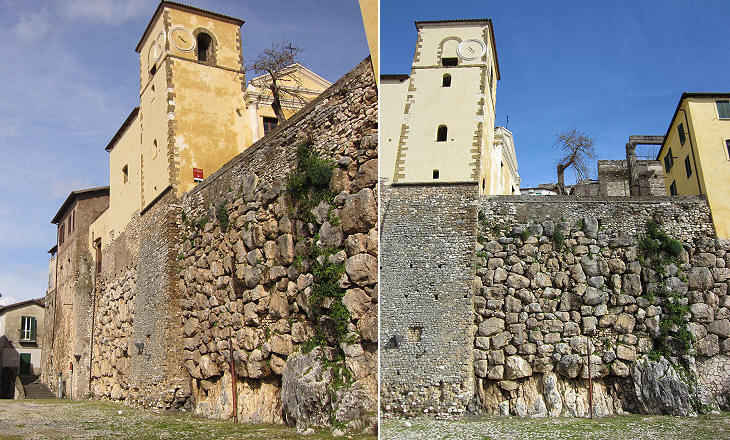 The use of massive walls was not limited to the construction of fortifications, but was required by the nature of the rocky ground in order to obtain small terraces. Although at first sight the wall shown above seems on the verge of collapsing, it has supported the weight of huge buildings for the last 2,000 years. 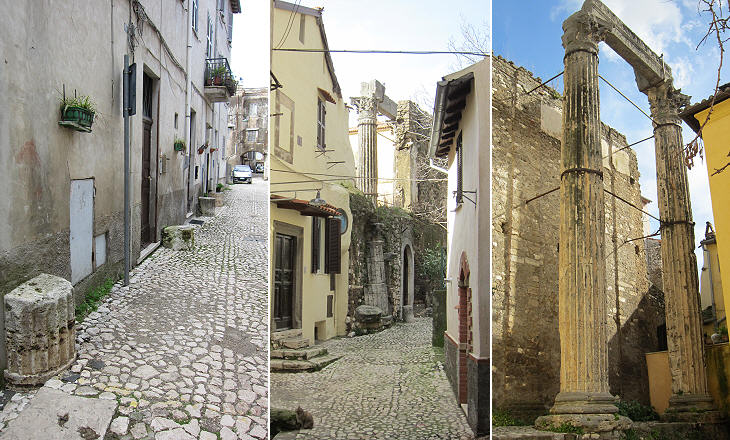 Castor and Pollux, Fortuna, Diana (the huntress goddess of the Pontine plains), Sol, Janus and Eolus, Apollo and Aesculapius all had their temples in Cora. Still, four beautiful Corinthian columns are shown, built into the wall of a house, which to this day are called the Temple of the Dioscuri. Gregorovius
When Gregorovius visited Cori the remaining columns of a temple were incorporated into a house; the front of the temple had six columns and the building was probably surrounded by other facilities, because parts of columns can be seen in the street leading to it. 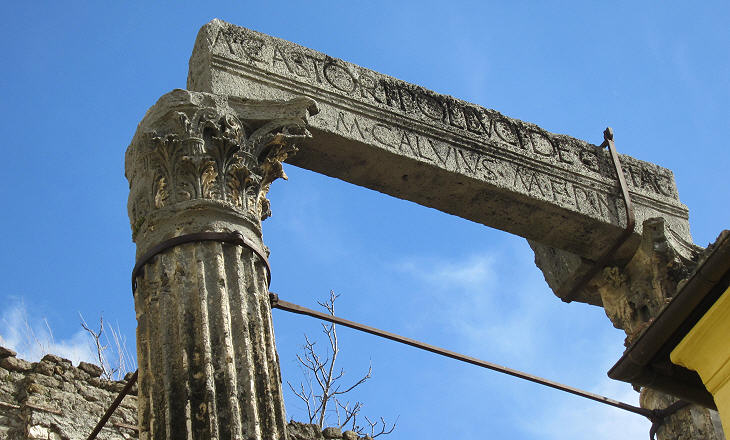 Tempio di Castore e Polluce: inscription bearing also the names of the local magistrates who built the temple (also in the image used as background for this page)

Cori was plundered during the civil war between Silla and Marius (89-83 BC) and the temple was built after that period on the site of an older one. It was dedicated to Castor and Pollux, whom the Romans regarded as protectors of their republic and to whom they dedicated a major temple in the Roman Forum. 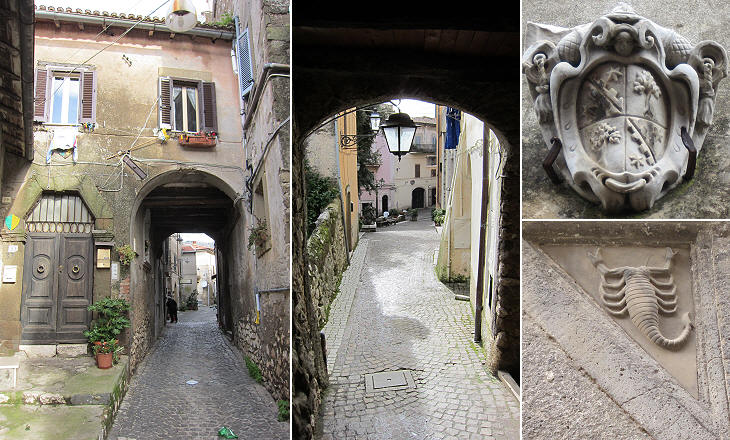 In the XVth century, when the authority of the popes was restored in the region, Cori was placed under the direct rule of the City of Rome, the municipal body residing in Campidoglio, to which the popes assigned some limited power in the maintenance of the city. A magistrate appointed by this body was in charge of the administration of Cori; thus the town retains only very few direct references to the popes and no references at all to the Roman noble families such as Colonna, Borghese, Barberini, Pamphilj who had large fiefdoms in the region. Because Gregorovius was keen on describing the very miserable living conditions of the inhabitants of the towns he visited, the fact that he did not expand on this matter when talking about Cori, is probably an indication that the town was in a slightly better economic situation than the others. 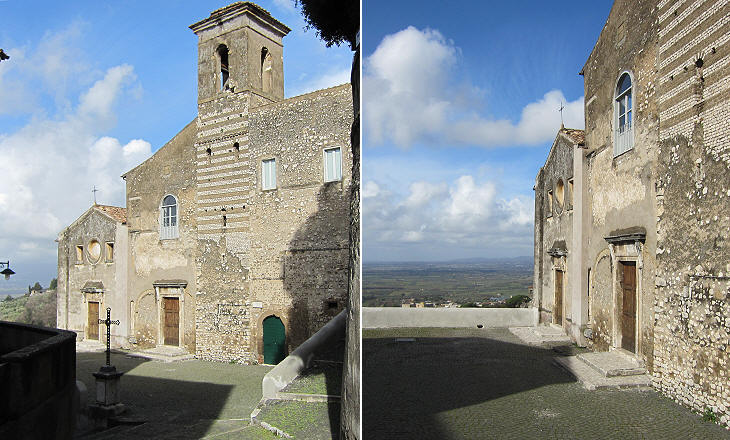 The Middle Ages are not very well represented at Cora. The Cathedral of St. Peter, built out of the ruins of the Temple of Hercules, does not present much of interest, but Santa Oliva, on the contrary, is well worthy of note on account of its architecture. However, all these ruins, what are they, compared to the view over the Maritima which we may enjoy from every nook of Cora? Gregorovius.
S. Oliva has a very uncommon design as it is a combination of two churches; the oldest one is located near the bell tower; it was enlarged in the XVth century by adding a second church to its left. The complex stands on an ancient terrace built to support a temple. Saint Oliva of Anagni was a nun who lived in the Vth century; she is the patron saint of Cori. 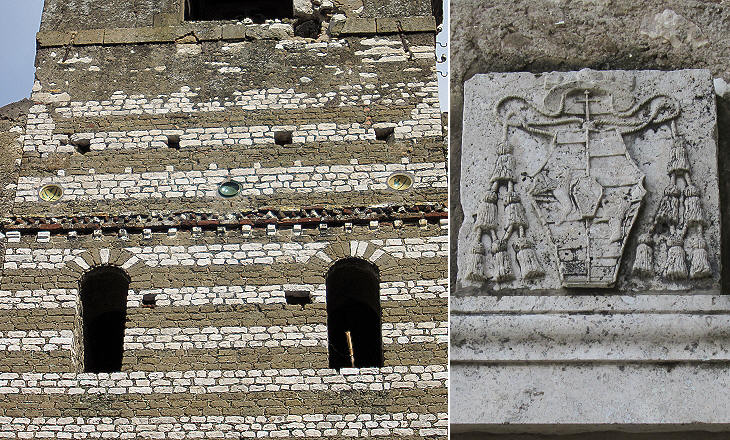 The enlargement of the church and the construction of a nearby Augustinan monastery was promoted by Cardinal Guillaume d'Estouteville; he was a supporter of that order and he built S. Agostino, one of the first Renaissance churches in Rome. In addition to being titular cardinal of Ostia he held the same position at Velletri, a major town near Cori. 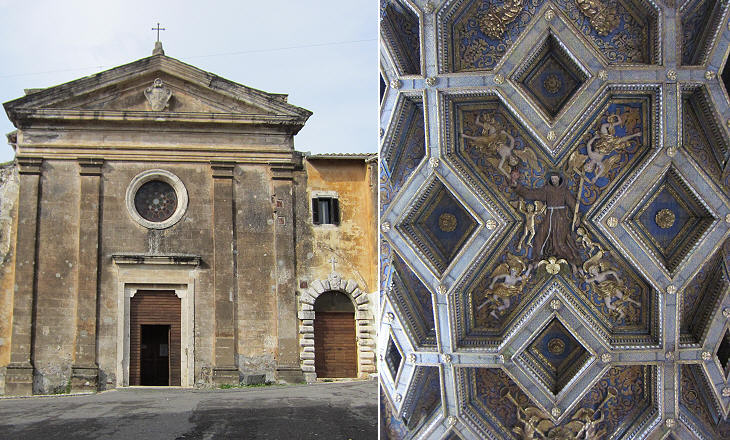 The Franciscans had their church and monastery on a small hill outside Cori, in line with the approach of the order which recommended modest architecture and decoration; the Franciscans however made an exception for the ceiling, an elaborate work by Luigi Guarnieri (see a page on the ceilings of some Roman churches). 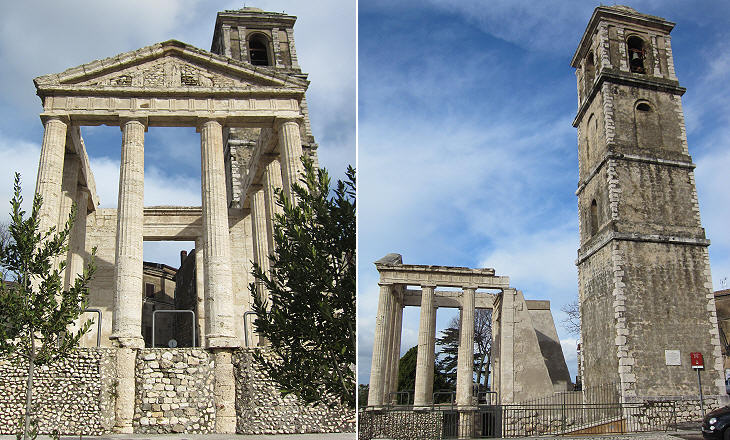 When you climb up the Acropolis, you find yourself standing, filled with amazement, before the peristyle of a temple which seems to be entirely Greek. It is a graceful little building, of the Doric order, in good preservation. The bluish-grey colour which the travertine of the pillars has assumed gives it a charmingly antique aspect. They call it the Temple of Hercules, but apparently without any good reason for doing so. Gregorovius
The most famous monument of Cori is a Temple to Hercules which is located at the very top of the town; it was studied by many Renaissance artists, including Raphael. 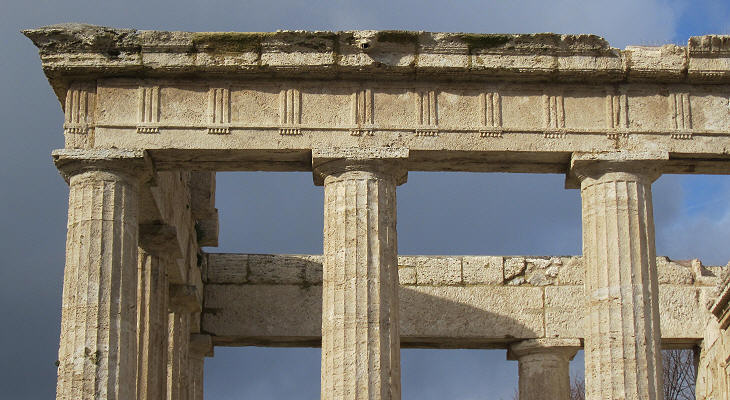 The reason for all this interest was in the use of Doric columns having the proportions (height versus diameter) of Ionian columns and in the fact that the front is slightly concave; the temple was built at the same time as Tempio di Castore e Polluce. It was eventually incorporated into the church of S. Pietro which was destroyed by bombings during WWII, with the exception of the bell tower. 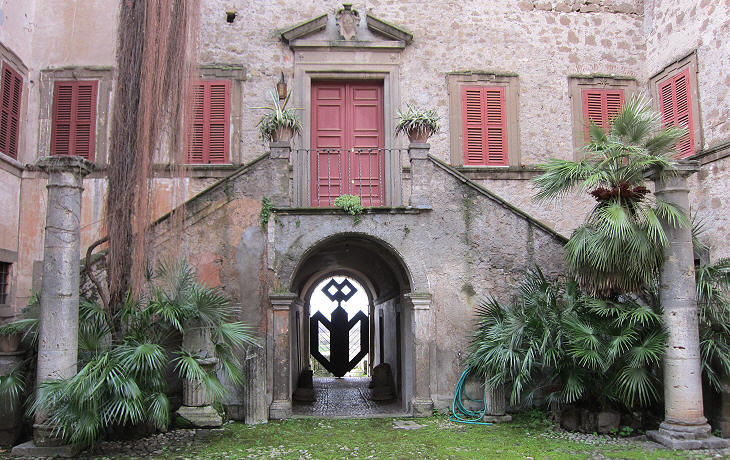 A summer spent here would richly repay the visitor. The air is cool and fragrant, the wine is excellent, the fruits are in such abundance that I bought twenty-six fresh figs for one bajocco; but Cora is not visited by the Romans. They congregate at Frascati and Albano, and few indeed of them know anything about the charms of their own Campagna. Gregorovius