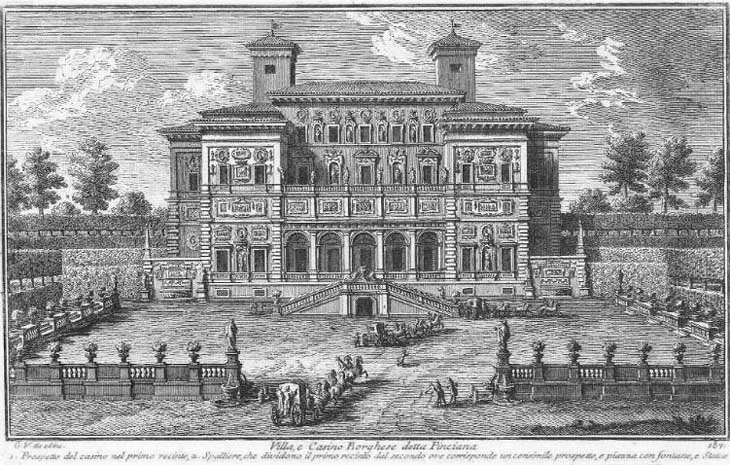 In this 1761 etching Giuseppe Vasi showed the arrival of very important guests at Villa Borghese; however the access to the southern gardens of the villa was not restricted to the friends of Prince Borghese, but it was allowed to the public in general, following a practice initiated by Cardinal Scipione Caffarelli Borghese, the founder of the villa. We owe to his generosity the fact that his heirs were unable to partition and sell the gardens in the late XIXth century, because of a clause in his will which turned the practice into a vested right of the citizens of Rome.
The view is taken from the green dot in the small 1748 map here below. In the description below the plate Vasi made reference to: 1) Façade of the Casino in the first precinct; 2) Box hedges separating the first precinct from a second precinct where the Casino has another similar façade.

The casino, the main building of the villa, has lost part of the stucco decoration which framed ancient statues and reliefs. In 1807 Prince Camillo Borghese sold (or was invited to sell) to Napoleon Bonaparte, his brother-in-law, the collection of antiquities which decorated the interior and the exterior of the building. Eventually the design of the façade was simplified and the empty frames were removed. 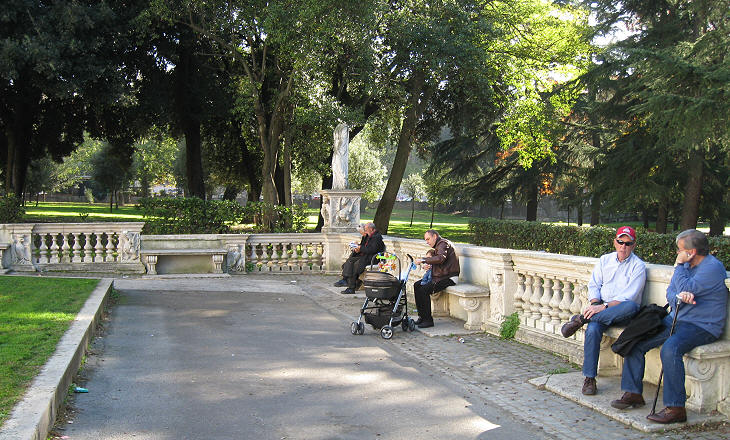 On the 17th November 1644: Round the house is a baluster of white marble, with frequent jettos of water, and adorned with a multitude of statues.
John Evelyn's Diary and Correspondence
In 1892 Prince Paolo Borghese sold the balustrade of the first precinct to American billionaire William Waldorf Astor, who used it to decorate his mansion at Cliveden-on-Thames; today the building belongs to the English National Trust, but it has been turned into a luxury hotel. In 1895 a copy replaced the original.
In 1901 the casino and the gardens were bought by the Italian State. Until a few years ago cars were allowed to enter this area and to park in the precinct, hopefully this is no longer permitted. 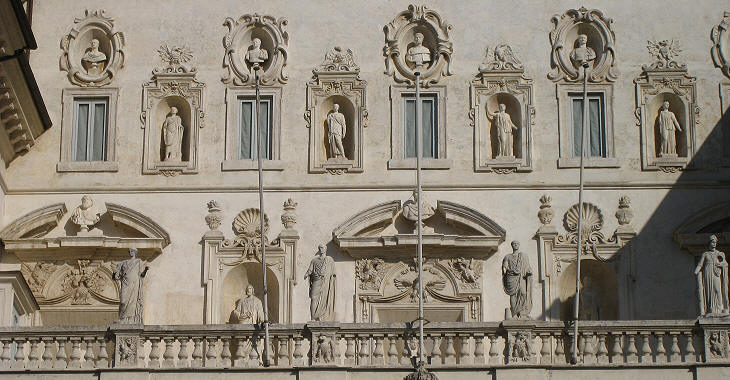 Detail showing the remaining decoration on the southern façade

It is a stately Pallace adorned with so many rare Statues and Picture, that their names make a Book in Octavo. As for the pallace it self, it's compassed on both sides by a fair semicircle of Statues which stand before the two doors. (..) The Wall of the House is overcrusted with a world of Anticallie, or old Marble-peices of Antiquity.
Richard Lassels' The Voyage of Italy, or a Compleat Journey through Italy in ca 1668
The casino was designed by Giovanni Vasanzio (Jan Van Santen) based on a project by Flaminio Ponzio and it was built in 1608-1615; it resembles that of Villa Medici (you may wish to see an aerial view of the casinos of the two villas side by side); its main aim was to house the collection of ancient statues and reliefs owned by Cardinal Scipione (*), rather than to be used as a summer residence, because for this purpose the Cardinal had other villas near Frascati.
Prince Camillo Borghese was unable to recover the collection he sold to Napoleon with the exception of a few items, but he managed to re-establish the old decoration in the central part of the façade with statues he found in his estates in the Roman countryside.
(*) The Cardinal is usually referred to by his name, an indication of the affection the Romans have for him. 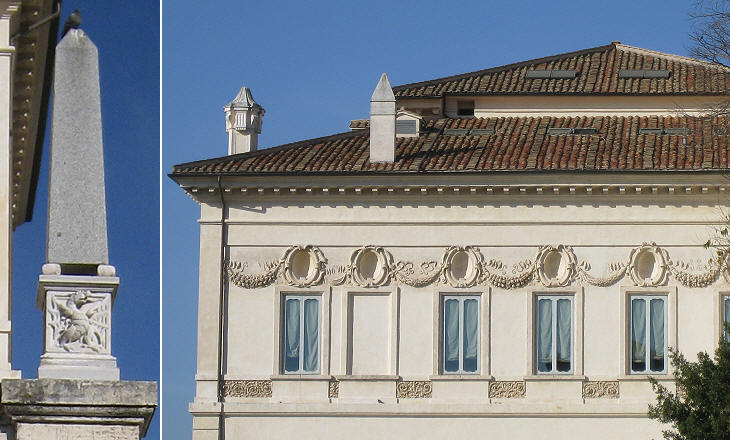 In 1586-1590 Pope Sixtus V restored and re-erected four ancient obelisks; by doing this he severed the connection between these monuments and pagan beliefs; as a result modern obelisks were used to decorate the casino.
Today the building houses Museo e Galleria Borghese. Its collections include the gallery of paintings which was located in Palazzo Borghese in town, ancient statues, reliefs and mosaics, some statues by Gian Lorenzo Bernini which were created for the casino and a statue portraying Princess Paolina Borghese, Napoleon's sister, by Antonio Canova. They are covered in page three. 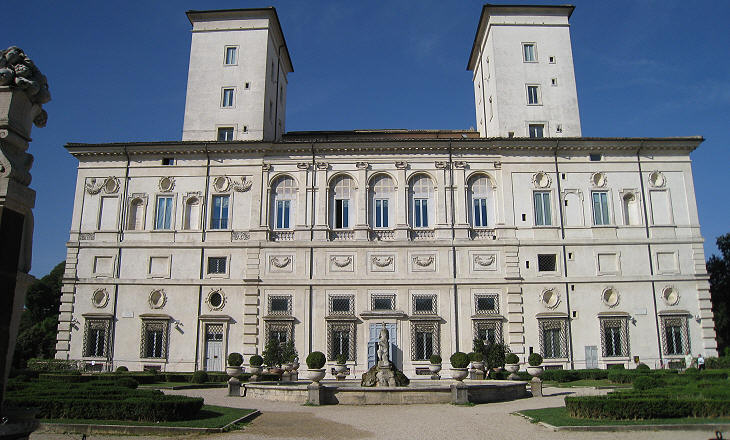 The northern façade has a design similar to the southern one; the closure of the loggia gives it a flat appearance; it does not have a grand entrance because this part of the villa was reserved to the landlords. After the death of Cardinal Scipione in 1633, the villa was inherited by his cousin Marcantonio II, who was given the title of Prince of Sulmona (a town in Abruzzo) by the King of Spain (and Naples). The Borghese had many fiefdoms to the south of Rome and their wealth was increased by marriages with the heiresses of other important Roman families. 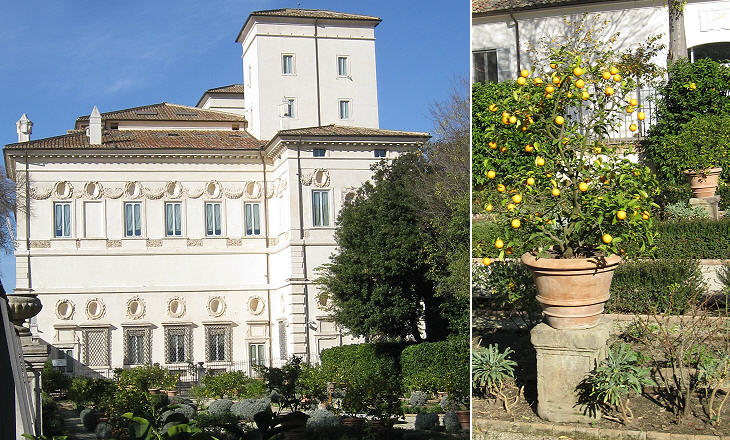 This garden abounded with all sorts of delicious fruit and exotic simples, fountains of sundry inventions, groves, and small rivulets. There is also adjoining to it a vivarium for ostriches, peacocks, swans, cranes, etc. and divers strange beasts, deer, and hares. (..) The groves are of cypress, laurel, pine, myrtle, and olive. Evelyn
The casino and a series of adjoining gardens formed a barrier between the public (southern) and private (northern) parts of the villa. These gardens and their facilities date to the time of Cardinal Scipione and they were part of his project of recreating a villa similar to those of the ancient Romans, the gardens of which were described by Pliny. The area to the east of the building was devoted mainly to a citrus fruit orchard; the varieties which were selected for this garden were the bitter ones (melangoli). They were grown in pots and this enhanced their decorative use. In 1650 Jacopo Manilli, head gardener of the villa, wrote that 22 different fruit trees were grown in this garden. 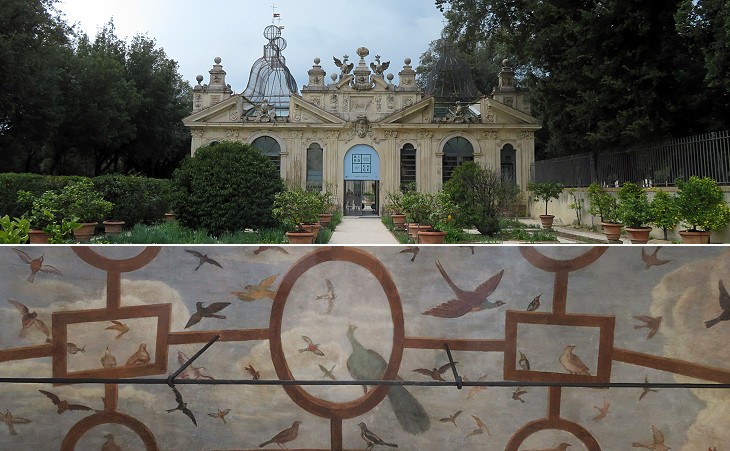 (above) Uccelliera (Aviary); (below) painted ceiling

There is a volary, full of curious birds. Evelyn
As the collecting of birds was one of the occupations of a gentleman, in addition to the collecting of antiquities and horticultural species, Scipione was engaged in the collecting of birds, especially rare exotic species. With the transparent roof of netting and the fresco depicting a pergola structure with birds perched or in flight, the intention was to create an enclosed space that gave the illusion of the outdoors.
Natsumi Nonaka - Renaissance Porticoes and Painted Pergolas - Routledge - 2017
The garden to the west of the building was planted with flowers and divided into two sections by an aviary designed by Girolamo Rainaldi. 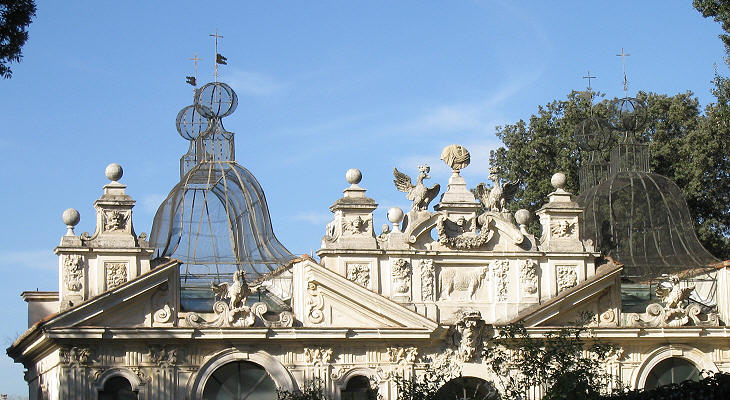 In this small building the highly decorated, but overall plain shape of the casino was replaced by a more complex design where eagles and dragons, the heraldic symbols of the Borghese, played a major role.
Many Roman villas had an aviary, either a real one (e.g. at Orti Farnesiani) or a painted one (e.g. at Villa Giulia, Villa Medici and Palazzo Farnese di Caprarola). 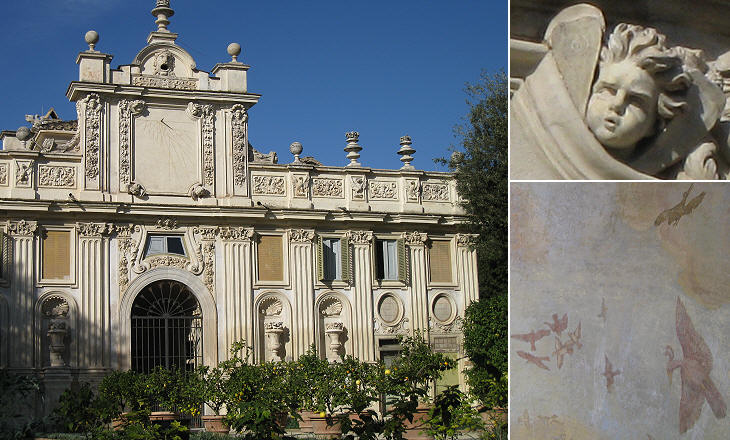 A second aviary was designed by Carlo Rainaldi in 1688; it is named after the sundial placed at its centre; the building was modified at a later stage, but the paintings inside its arched entrance reveal its original purpose. The sundial indicated both the Italian and the French/International hours. In addition at noon (meridies in Latin, hence meridiana) it indicated the day of the year. 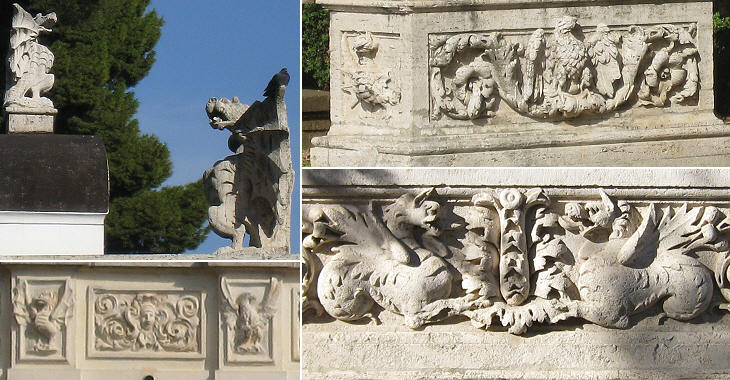 The grounds, which are three miles in circuit, are thrown open to the public as freely as if they belonged to it. (..) As a place of resort, it is more popular with persons of modest condition among the Romans than with the favored classes. It was pleasant to note that the hospitality of the prince was never abused. Often as I was there, I never saw the smallest act of spoliation or indecorum. (..) Every one seemed to feel that the bounty thus extended involved a corresponding obligation, and comported himself accordingly. In these extensive grounds, every variety of taste will find its appropriate gratification. They contain many remains of ancient art scattered through them, such as sepulchral monuments, vases, statues whole or broken, and bas-reliefs, a temple, a hippodrome, or circus, a mock ruin, a pretty lake near the entrance, with a mimic waterfall, the delight of children indigenous and exotic, and two or three fountains. The sketcher and the lover of nature will be attracted by the rich masses of oak and laurel, the lines of funereal cypresses, and the broad, spreading canopies of the stone pine. (..) My last week was spent mostly in long walks around the city and its immediate neighborhood. (..) I strolled through the grounds of the Villa Pamphili and Villa Borghese, which were now bright with the green, and starred with the blossoms, of spring, and heard for the last time the voices of the aerial spirits that live in their venerable pines.
George Stillman Hillard - Six Months in Italy in 1847-1848 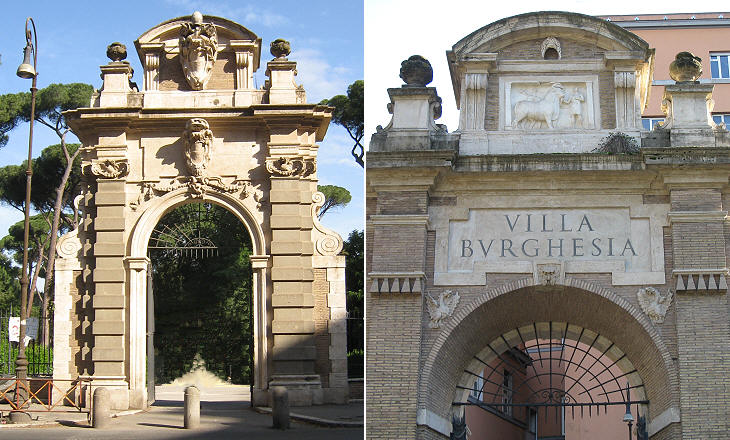 (left) The gate in Via Pinciana; (right) rear side of the gate

While the special gardens have retained to a great extent their XVIIth century appearance, the gardens open to the public which Hillard described in 1848 were the result of many changes of the late XVIIIth and early XIXth centuries which are discussed in page two.
The original gate built by Cardinal Scipione is located along Via Pinciana, the street leading from Porta Pinciana to Via Salaria. An inscription in Latin stated the rights of the visitors: I, the custodian of the Villa Borghese on the Pincio declare the following. Whoever you are, provided you are a free man, do not fear the fetters of the law here. Go wherever you want to, ask for whatever you desire, leave whenever you wish. Here things are provided more for the visitor, than for the owner. (..). It is now inside the casino. Similar inscriptions had been placed by Cardinal Ferdinando de' Medici at his villa.

Yesterday, after sunset - you cannot go out here sooner on account of the heat - I was in the Villa Borghese. How I wished that you were with me! I at once found four splendid scenes which one might well copy if he could. (August 1, 1787)
On a splendid morning I at once hastened with your letter to the Villa Borghese, and followed in thought for two hours the course of the piece, the characters and the conditions (..). (December 1787)
J. W. Goethe - Italian Journey - Translation by Charles Nisbeth.
A small semicircular wall separated the public gardens from other areas which were farmed. Goethe was one of the many foreigners who enjoyed going for a stroll at Villa Borghese. He might have sat in this spot, which is named after him. It is protected from winds and in the morning the walls reflect the rays of sun, so that Goethe could have spent hours there reading his correspondence even in December. 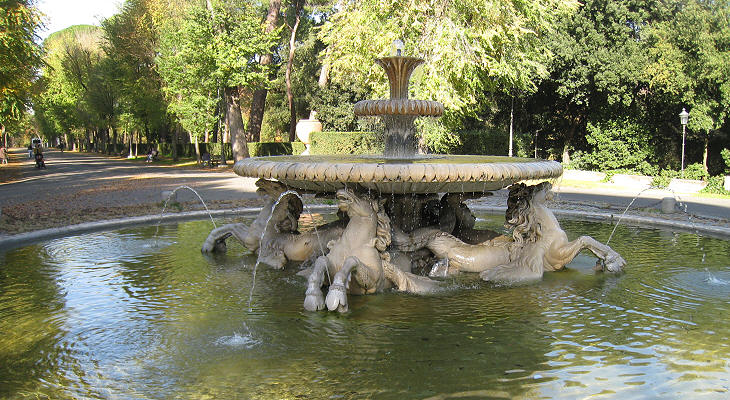 At the time of Cardinal Scipione the public gardens were divided into square sections by long alleys; each section was bordered by hedges; the trees were those typical of the ancient sacred woods: elms, ilexes and laurel groves.
The fountains had a rustic appearance, with rocks, masks and statues of rivers (perhaps similar to Fontana dell'Aquilone, another fountain by Vasanzio in the Vatican Gardens). One of these fountains was replaced in 1791 by Fontana dei Cavalli Marini, which was designed by Cristoforo Unterberger, who was involved also in the redecoration of the casino; other fountains disappeared and new ones were added during the many changes made to the gardens.

Go to page two to see more of the gardens or to page three to peer into the casino.
You can spend A Sunny Day at Villa Borghese and see more of it.