(..) Iam omnes Etruriae populi praeter Arretinos ad arma ierant, ab oppugnando Sutrio, quae urbs socia Romanis velut claustra Etruriae erat, ingens orsi bellum. All the peoples of Etruria, except the Arretini, had already armed, and beginning with the siege of Sutrium, a city in alliance with the Romans, and forming as it were the key to Etruria, had set on foot a tremendous war.
Livy - Ab Urbe Condita - Book IX - translation by B. O. Foster. 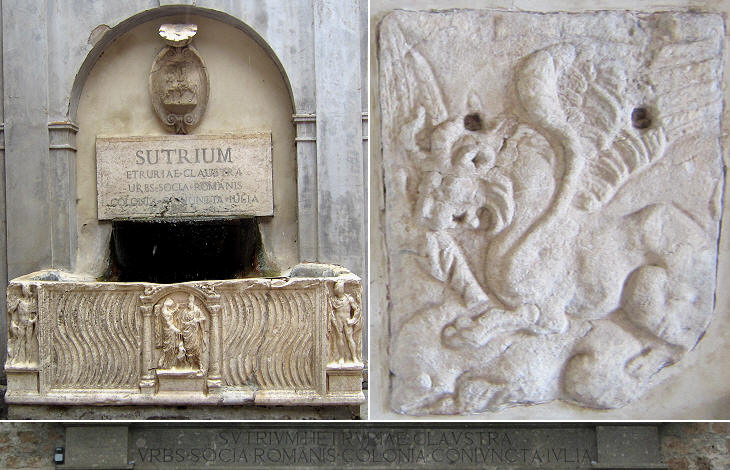 (above) Palazzo Comunale (Town Hall): (left) an ancient sarcophagus and an inscription with a quotation from Livy (Etruriae Claustra - Urbs Socia Romanis) and a reference to Pliny the Elder (Colonia Coniuncta Iulia) who listed Sutri among the Roman colonies in Etruria ; (right) side of another sarcophagus with a relief portraying a mythical beast; (below) inscription on Porta Morone, the northern gate of Sutri

The inhabitants of Sutri have always been proud of their ancient alliance with Rome and of their town having been named "Gate to Etruria" by Livy, a privilege they shared with Nepi. The words of the inscription in the Town Hall were repeated on Porta Morone, when it was redesigned in the early XXth century.
Sutri however does not retain monuments of its ancient past inside the walls, because medieval and modern buildings have replaced them, although many reliefs and fragments of statues and columns can be seen in the courtyard of the Town Hall. 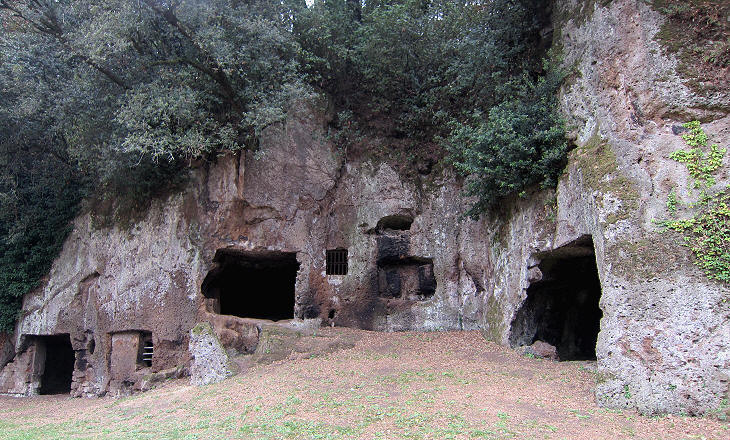 As we approach the town on the Roman side, the rocks on the left of the road are filled with tombs. They are cut in the tufa, but many seem to have been fronted with more durable stone-work. The cliffs are crested by grand old ilexes which hang downwards in the most luxuriant masses of foliage, unspoilt by the axe.
Augustus J. C. Hare - Days Near Rome - 1875. 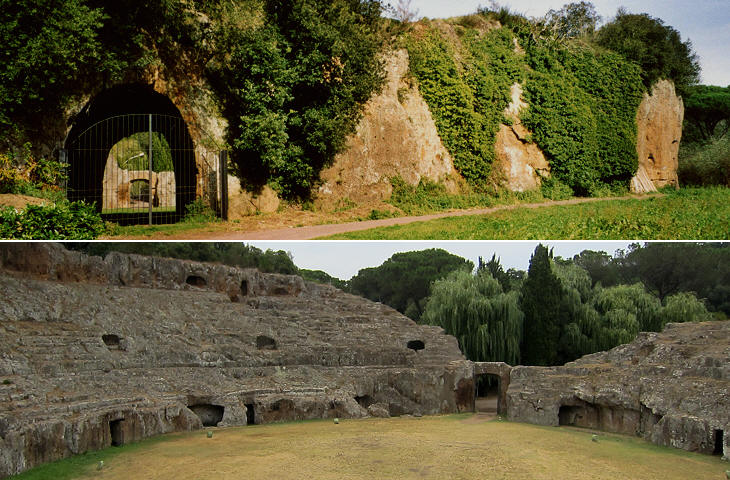 Views of the amphitheatre

There is no appearance of anything more than this, and it is startling, when one turns aside from the road and crossing a strip of green meadow passes through a gap in the rocks, to find oneself suddenly in a Roman Amphitheatre, perfect in all its forms, almost in all its details, with corridors, staircases, vomitories, and twelve ranges of seats one above the other, not built, but hewn out of that solid rock, all one with the cliffs which outwardly make no sign. Hare
He has made a great deal of delightful experience easier, but we hardly know whether to thank him. We see the mighty annual herd of tourists looming up behind him, and we sigh over the kindly obscurity that he has dispelled. It was thanks to their being down in no guide-book that he found many of the places he describes so charming; but he breaks the charm, even while he commemorates it, and he inaugurates the era of invasion.
From Henry James' review of Hare's book - The Nation 1875.
Henry James was rather too pessimistic on the impact of Hare's book. The amphitheatre is now part of a small archaeological area, but it still charms the (rather rare) visitors. 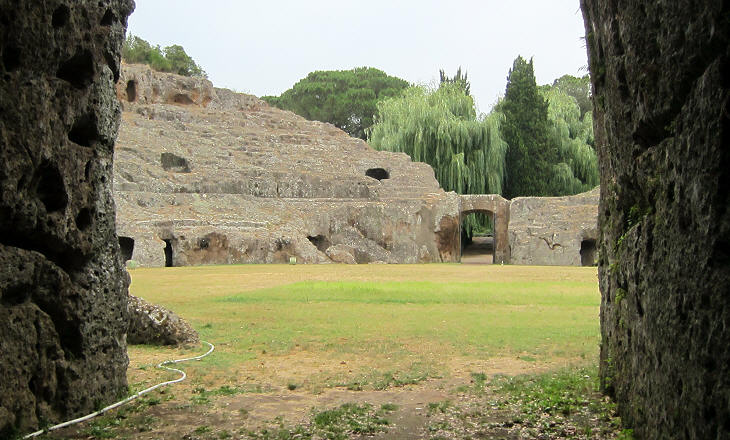 The amphitheatre seen from its western entrance

The amphitheatre was probably built at the time of Emperor Augustus when the population of Sutri was increased by the arrival of Roman veterans. The amphitheatre had vomitoria (internal passages), stairs and steps for the audience. There is no sign of brickwork; all the facilities were obtained by cutting into the rock. 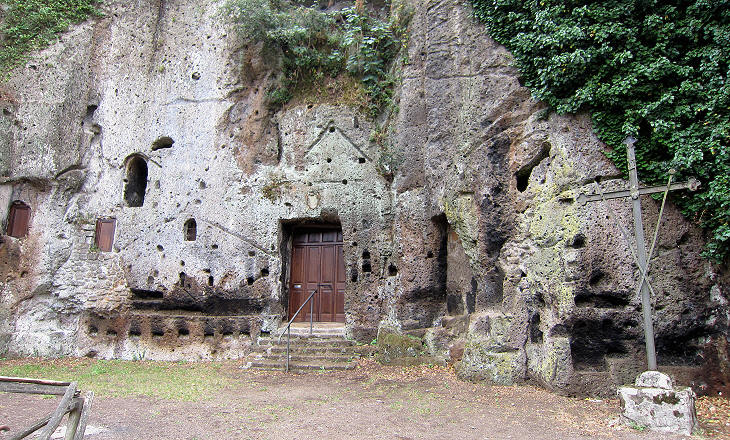 Several tombs had apparently been thrown together at a very early period of Christianity, and formed a very long narrow Christian church, of which the pavement, roof, pillars, and seats were all one, and all carved out of the living rock. From the antechapel or entrance tomb, still surrounded with its couches for the dead after the manner of Etruria, one looks down an avenue of low pillars green with damp, and separated from the aisles by rock-hewn seats, to the altar, beyond which, from an inner sanctuary, a light streams in upon the gloom. (..) It is a touching and most unearthly sanctuary, and carries one back to the earliest times of Christian life and Christian suffering more forcibly than the most celebrated Roman catacomb. Hare
What Hare believed was a symbol of Christian sufferings was instead a symbol of Christian triumph. Prior to being turned into a church, the long hall had been a mithraeum, the gathering place of the followers of Mithra, a Persian god widely worshipped in Rome during the IIIrd century AD. Ceremonies took place in underground sites rather than in temples and were attended by small groups of initiates. In 392, at the time of Emperor Theodosius, the Christian faith became the official religion of the Roman Empire and the mithraeum was turned into a church (S. Clemente and S. Prisca in Rome are churches built on the site of a mithraeum). Many well preserved mithraea can be seen at Ostia. 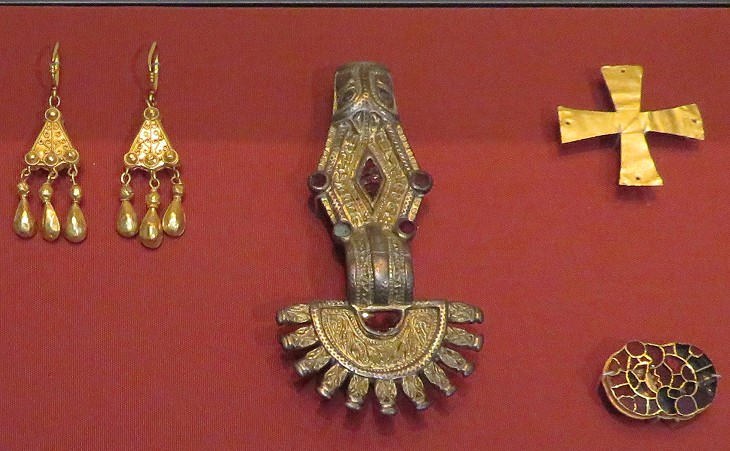 British Museum: Longobard jewels from a tomb at Sutri

The history of the State of the Church started in Sutri in 728. At that time Italy was split between the Longobards (or Lombards), who had invaded the peninsula in the VIth century and the Byzantine Empire. The Longobards, who were ruled by an elected king, occupied most of Italy while the Byzantines retained control over Ravenna, Rome, Naples and a few other coastal areas. Liutprand, a Longobard king, conquered many Byzantine territories near Ravenna and in 728 he moved with his army towards Rome, but he desisted from conquering the city at the request of Pope Gregory II to whom he donated the town of Sutri, which thus became the first possession of the Roman Church: this explains why this part of the Papal State was called Patrimonium Petri (it included Viterbo). 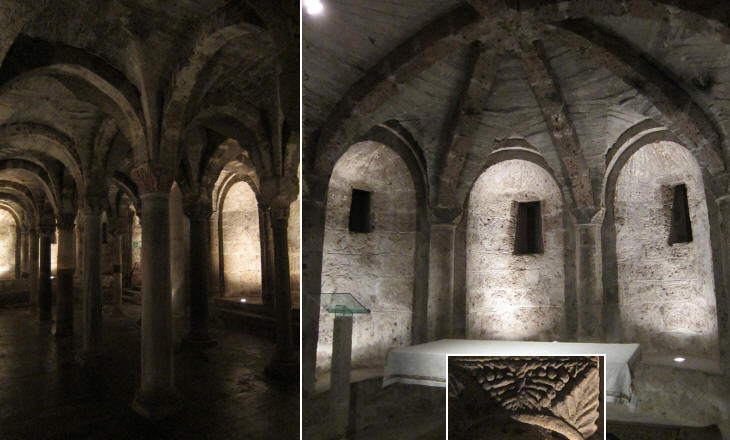 Sutri retains a very rare memory of that period consisting of a large crypt under the cathedral. It was built by using ancient columns, but apparently the Longobards did not find enough capitals for them and they therefore used new capitals which they decorated with roughly cut motifs. 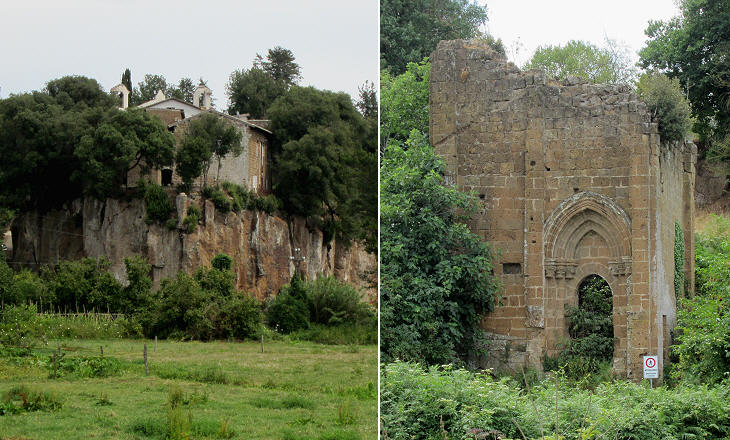 Sutri was located along Via Cassia, the ancient road linking Rome with northern Italy. During the Middle Ages it became known as Via Francigena because it was used by French pilgrims going to Rome. Its northern approach to Sutri is linked with legends associated with Charlemagne who probably passed by Sutri on his way to Rome where he was crowned Imperator Romanorum on Christmas 800.
The ruins of a medieval castle on the hillock of S. Maria del Parto are named after him and a cave beneath it is called Grotta d'Orlando and believed to be the birthplace of Roland, the chief paladin of Charlemagne.
The picturesqueness of approaching Sutri by the restored path of Via Francigena is increased by the ruins of a medieval tower, which was eventually included in a Carmelite monastery. It was almost demolished in 1433 when Niccolò Fortebracci, a mercenary warlord, plundered Sutri. 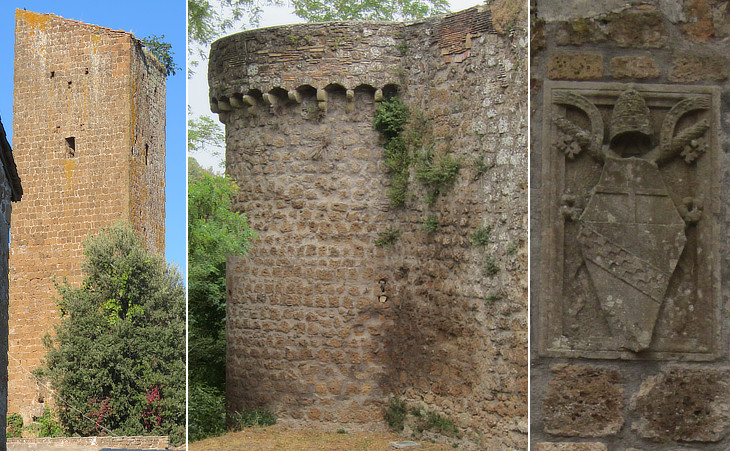 Sutri was founded by the Etruscans on a narrow hill protected by ravines created by two small streams. The natural defences of the town were supplemented by walls and towers built at different periods. Only the northern side of the walls was designed according to modern patterns in the late XVth century. These fortifications however compare unfavourably with those built at the same time at nearby Nepi, Ronciglione and Civita Castellana. 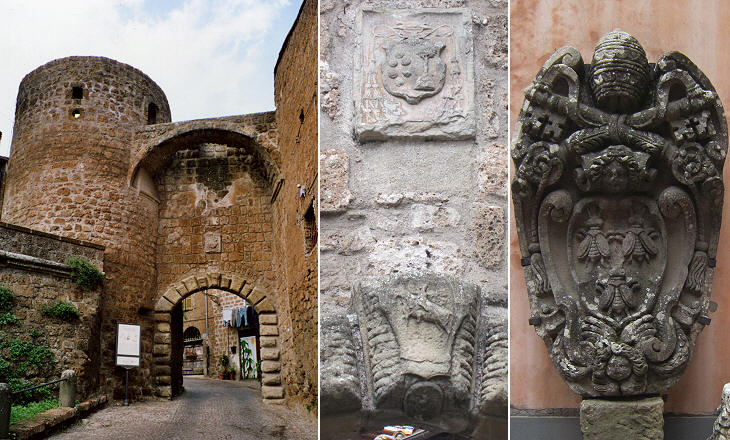 (left) Porta Vecchia or Franceta; (centre) joint coats of arms of Medici (left) and Cesi (right) cardinals and coat of arms of Sutri portraying Saturn, the mythical founder of the town, as a knight (a better relief is used as background image for this page); (right) coat of arms of Pope Urban VIII which stood on Porta Romana

Via Cassia (or Francigena) passed at the foot of the hill and the ancient gate which gave access to the town is the only one which has not been demolished or enlarged/modified. In the XVIth century the route of Via Cassia was modified and it crossed the whole town from south to north. Pope Urban VIII built a new gate at the southern entrance, which was eventually pulled down to enlarge the street. The main families of medieval Sutri built their tower houses on the site of the ancient acropolis; they were built using the local volcanic stone which has yellowish tones. The aspect of this quarter of the town was not modified by the construction of the Bishop's Palace, whereas the bell tower of the Cathedral had a lighter design. 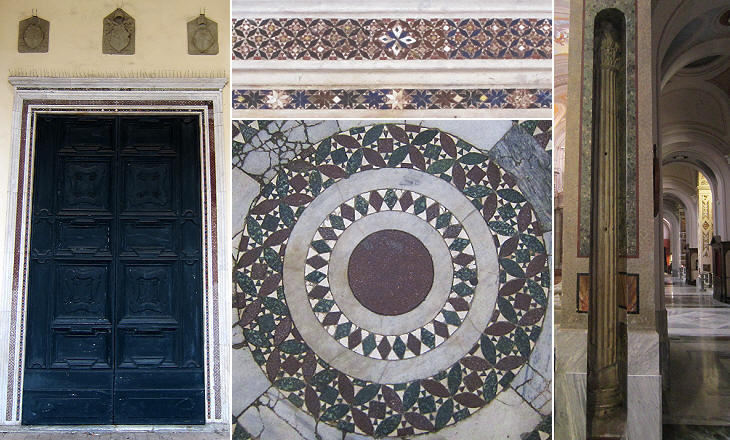 Cathedral: (left) main portal; (centre) Cosmati work on the portal and on the floor of the interior; (right) one of the ancient Corinthian columns which were incorporated into XVIIIth century pillars

The earliest records indicate that Sutri was a diocese at the beginning of the Vth century. Being a bishopric seat was very important for a town of the Papal State, because the jurisdiction of bishops was not limited to religious matters, but included the administration of the territory of the diocese. Sutri had to accept a downgrading of its role in 1435 when its diocese was united with that of Nepi; this decision by Pope Eugenius IV was probably a consequence of the plundering of Sutri in 1433 by Niccolo Fortebracci which impoverished the town and caused its decline. 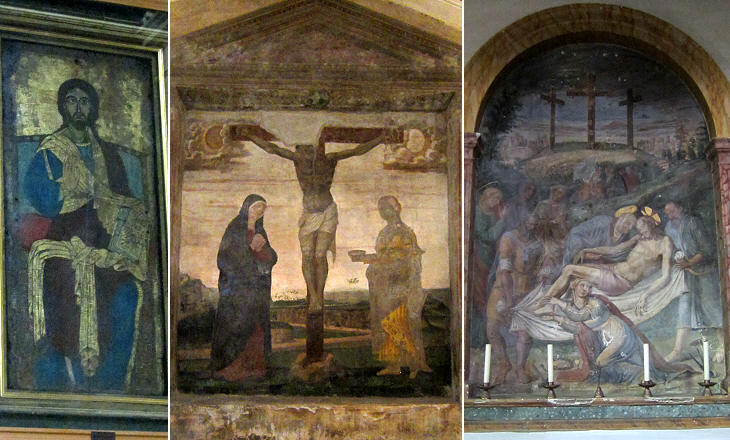 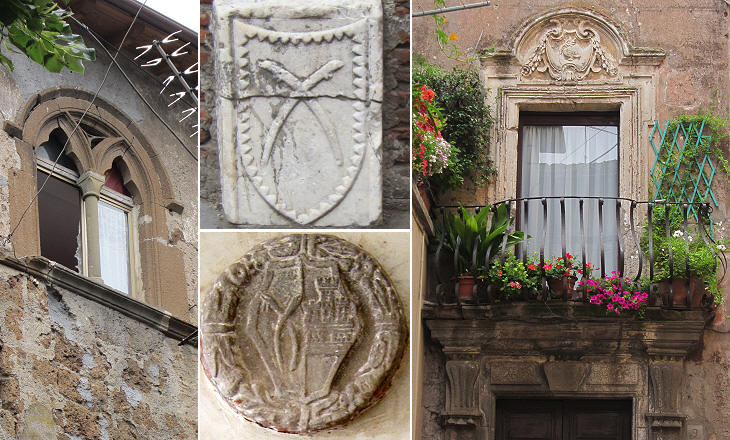 (left) Window of the house of Giovanni Andrea dell'Anguillara; (centre) coats of arms of the Anguillara; (right) XVIIth century balcony decorated with the dove of the Pamphilj

Sutri was a direct possession of the Papal State yet in the XIIIth century the Vico and the Anguillara families fought for its control. The Vico were based on Mount Cimino, north of Sutri and the Anguillara around Lake Bracciano, where a town is named after them. Eventually the Anguillara ousted the Vico and became the most influential family of Sutri, although the town did not become one of their fiefdoms.
In the XVIIth century the Pamphilj acquired great importance in the region. Olimpia Maidalchini, sister-in-law of Pope Innocent X, set her countryside residence at S. Martino al Cimino, not far from Sutri. 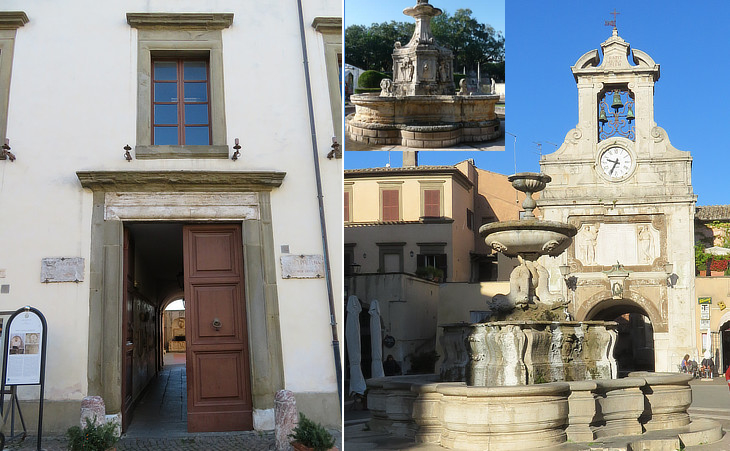 In 1720 the inhabitants of Sutri made a request for a new fountain. Cardinal Renato Imperiali, a very influential member of the Papal Court, endorsed the request and commissioned Filippo Barigioni the design of a new fountain which was installed in 1722 (you may wish to see other fountains by Barigioni at Corneto and Nepi).
The fountain was dismantled in 1908 and replaced by a modern one. The old fountain was eventually sold to James Deering, an American businessman, who moved it to Villa Vizcaya in Miami, Florida.
The Town Hall of Sutri is situated in the main square in the former palace of the Muti Papazzurri. This family had a palace in Rome and in 1674 they acquired the fiefdom of Filacciano; they inherited several properties at Sutri, thus becoming the wealthiest family of the town. 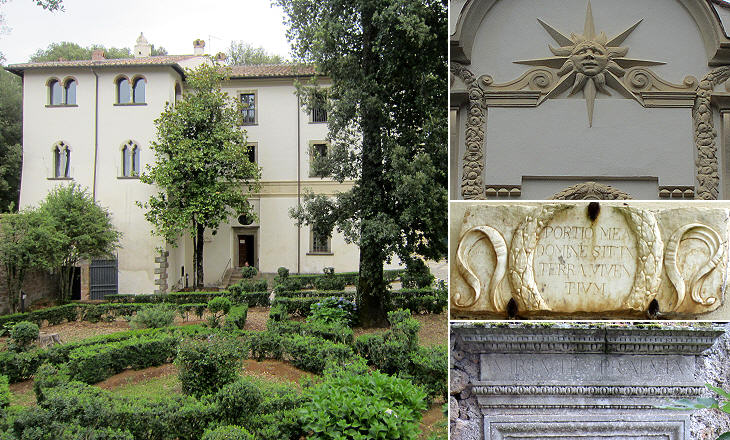 (left) Villa Savorelli; (right) details of its decoration and inscriptions: a) Portio Mea Domine Sit in Terra Viventium (my portion in the land of the living - Psalm 142); b) Virtute Praevia (origin of virtue, an epithet of the Virgin Mary)

The Muti Papazzurri inherited "Castello di Carlo Magno" and they built a villa there; it is rather small but it has a well designed garden, some ancient stones and in addition an evocative view over Sutri. The villa is generally known as Villa Savorelli, the heirs of the Muti Papazzurri who had a fine villa on the Janiculum which had belonged to the Farnese. 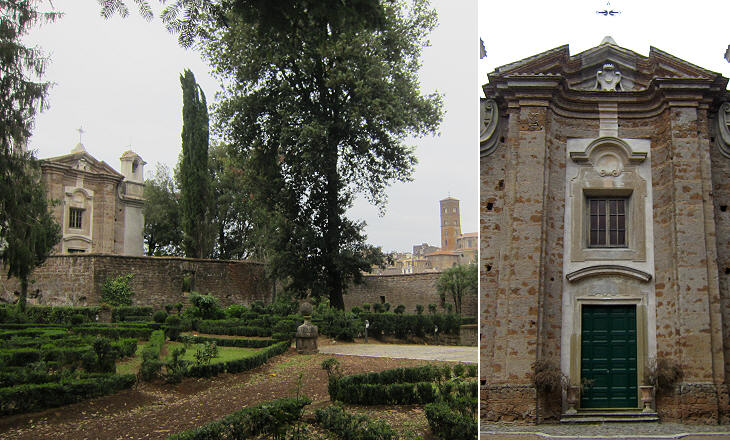 At the beginning of the XVIIIth century the Muti Papazzurri asked permission to build a church on the site of the former medieval castle. Permission was granted by the local bishop on the condition that the inhabitants of Sutri had access to the new church which bears the coat of arms of the Muti Papazzurri (a crescent moon).
During WWII Villa Savorelli was requisitioned by German troops. Today it belongs to the Town of Sutri.