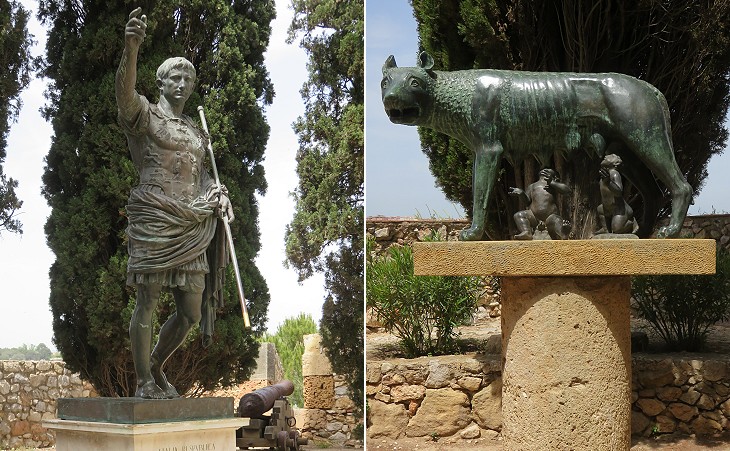 A few vestiges remain of the palace of Augustus, and of the great circus; an arch or two of the amphitheatre, and some steps cut in the solid rock, still exist impending over the sea.
Henry Swinburne - Travels through Spain in the Years 1775 and 1776 in which several monuments of Roman and Moorish architecture are illustrated
Tarragona, in Latin Tarraco, is one of those famous towns which only recall the remembrance of their former grandeur, and serve as a comparison for the vicissitudes which may fall to the lot of the largest and most populous cities. (..) It had all the advantages of Rome itself an amphitheatre, a circus, palaces, temples, and aqueducts.
Alexandre de Laborde - A View of Spain - translated into English for Longman, Hurst, etc. 1809 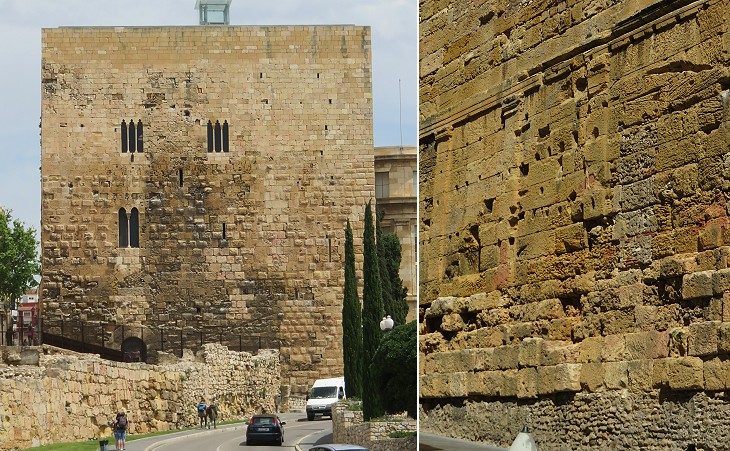 How dearly ancient Tarragona was used up as a quarry in rebuilding the modern town may be seen at the end of the Rambla in the Almacen de Artilleria (Artillery Warehouse). (..) This edifice, said to have been the palace of Augustus, half destroyed by Suchet (a French general) in 1811, has since been made a prison. The bossage work of this ruin upon ruins resembles that of Merida; the thickness of the walls in some places exceeds 20 ft.
Richard Ford - A Handbook for Travellers in Spain - 1855 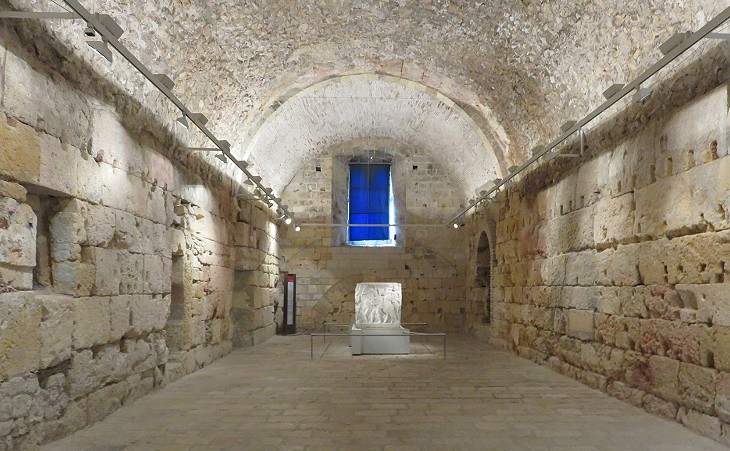 Interior of the Praetorium with the Sarcophagus of Hippolytus

The building was most likely the residence of the Roman governor (often a former praetor) in charge of Hispania Tarraconensis, the Province of which Tarragona was the capital. It housed the stairs that connected the Lower Town to the Provincial Forum by way of the Circus, to which it was connected by underground passageways. In medieval times it became the residence of the representatives of the Aragonese kings. 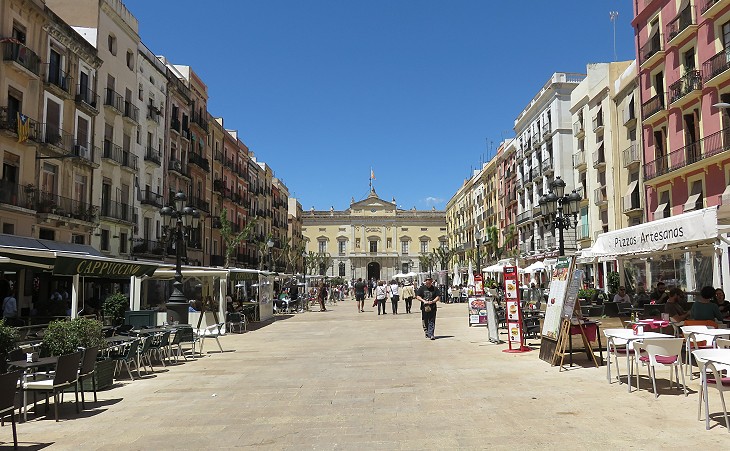 Portions of a circus 1 500 feet long, but now built over, are to be traced. (..) The site was partly excavated and ascertained in 1754 by an Irish gentleman named Coningham. Ford
The Circus was built at the time of Emperor Domitian and it completed the process of monumentalization of the Upper Town by physically separating it from the Lower Town. Its location in such a central position is unusual because most Roman circuses were situated outside the town walls (e.g. at Merida and Toledo). The Circus Maximus of Rome was inside them, but in a relatively peripheral site. 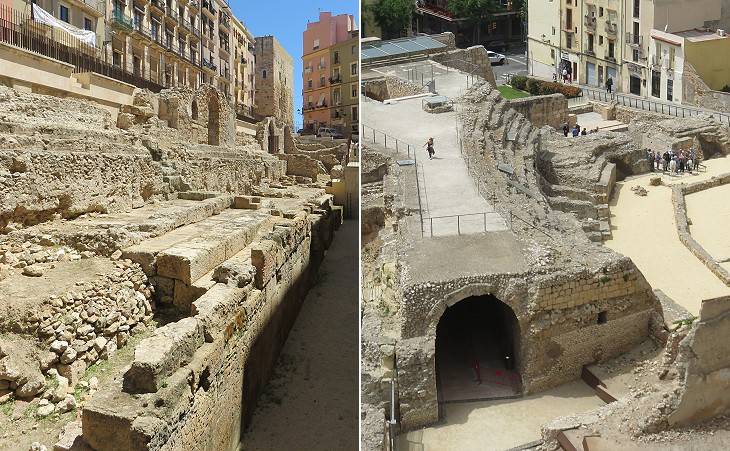 Roman Circus: (left) part of a long size; (right) view of the south-eastern end from the Praetorium

The carceres, the "cages" from which the chariots started the race have been located under the Ayuntamiento. The seating section could house up to 30,000 spectators. It is likely that the circus was used until ca 470 when Tarragona was seized and sacked by Euric, King of the Visigoths. An inscription in the Archaeological Museum celebrates Eutyches, a young charioteer. 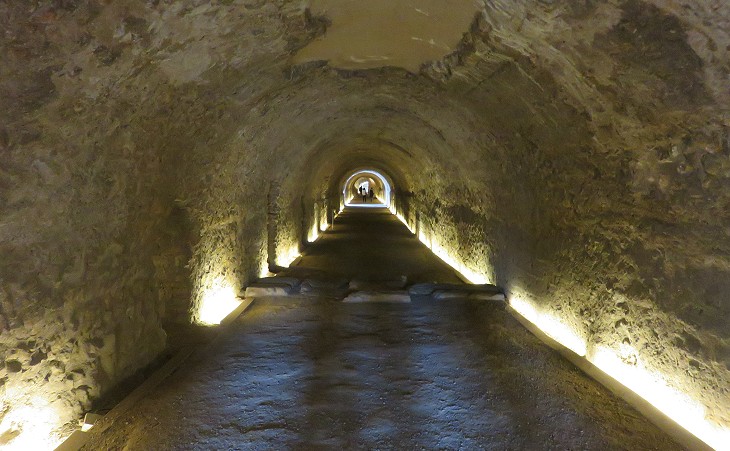 The long underground gallery under the western long size of the seating section shows the solidity of opus caementicium, a Roman construction technique which has defied the ravages of time. 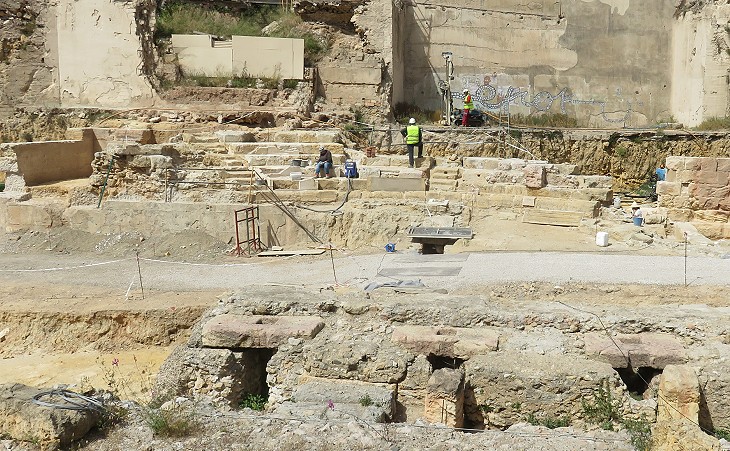 Roman Theatre in the Lower Town

A Roman theatre was discovered in the XXth century near Foro Colonial, the Forum of the City of Tarragona. It was built in the late Ist century BC on a slope in the ground to reduce costs. Archaeological excavations were limited to unearthing the first steps of the seating section and the floor of the stage. It appears its use was discontinued in the IInd century AD and its stones were used for new buildings. 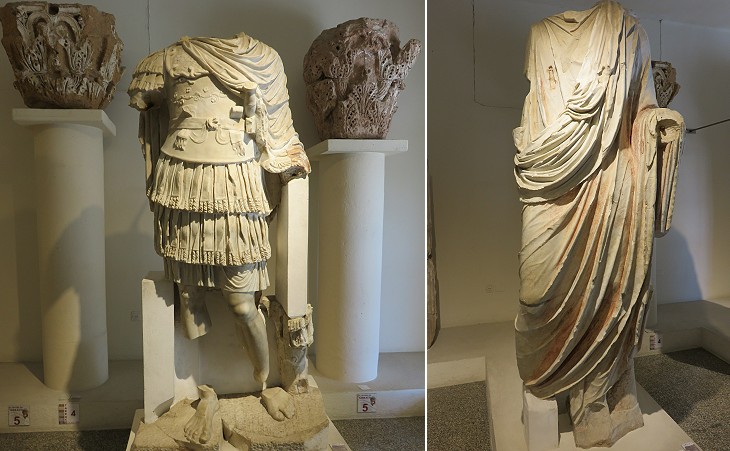 National Archaeological Museum of Tarragona: statues from the theatre: (left) Emperor Titus or Domitian (see other statues of barefoot emperors); (right) a magistrate

The architectural details and the use of imported materials are taken as evidence of its architects and craftsmen having been brought in from Rome. The quality of the materials and marbles used is remarkable, as is the richness of the architectural and sculptural decoration, which gives an idea of the grandeur of Imperial Tarraco.
From the criteria endorsing the 2000 inclusion of the Archaeological Ensemble of Tarraco in the UNESCO World Heritage List.
The remains of the theatre are not very impressive, however the statues which were found there testify to the high level of its decoration. You may wish to see the Roman Theatre of Merida and its statues. 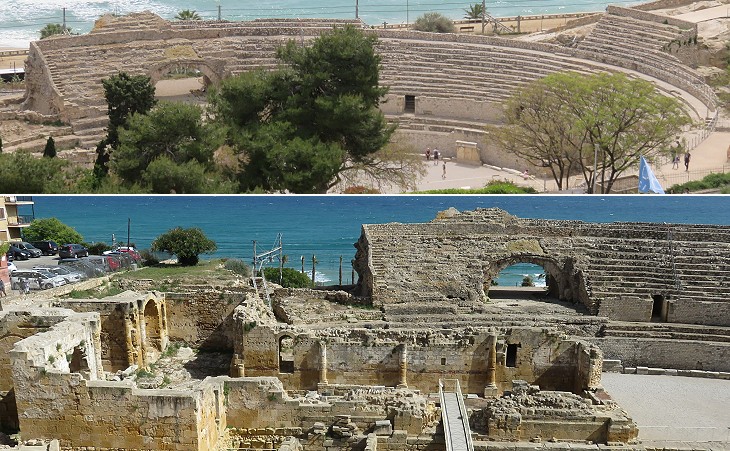 Roman Amphitheatre: (above) seen from the Praetorium; (right) section by the sea and churches in the arena

Leaving the Puerta de Santa Clara, near the Bastion del Toro (perhaps near Torre de las Monjas), and close to the sea-shore, are a few misshapen remains of what once was an amphitheatre, which have always been used as a quarry. Ford
Today we have a much more complete view of the structures of the Roman amphitheatre. In 1953 the foundations of two churches, one inside the other, were unearthed and the buildings were partially reconstructed. Other archaeological activities in 1987 improved the understanding of the main features of the amphitheatre.
The image used as background for this page shows a detail of a 1711 engraving by Johann Bernhard Fischer von Erlach depicting the amphitheatre. 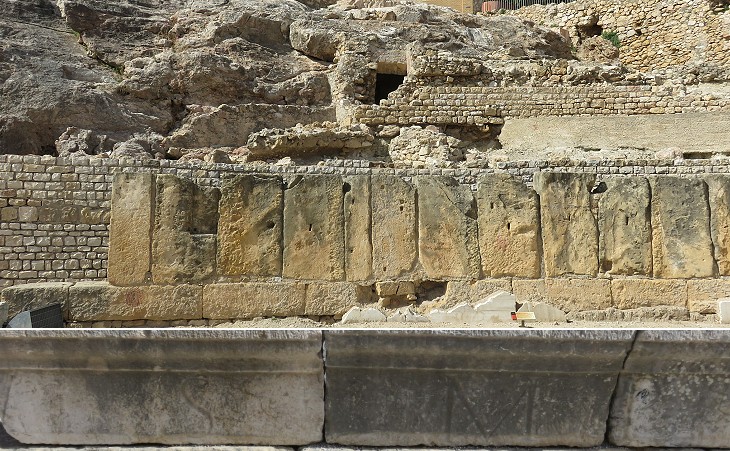 Roman Amphitheatre: (above) parapet protecting the audience; (below) part of an inscription celebrating Emperor Heliogabalus

The amphitheatre was built at the beginning of the IInd century AD along Via Augusta, the Roman road which crossed Spain from the Pyrenees to Cadiz. In 221 at the time of Emperor Heliogabalus its facilities were improved and embellished. This was celebrated in the longest Roman inscription found in Spain. The name of the Emperor was deleted but not completely: the letters CE, RD and AG which were found on different marble blocs led archaeologists to complete them as follows: (Sa)CERD(os amplissimus Dei Invicti Solis El)AG(abali). They could do this because of other inscriptions in which the name and the titles of the Emperor had not been erased. The Emperor regarded himself as the High Priest of Sol Invictus (Invincible Sun), a god whose worship he tried to impose on the whole Empire. 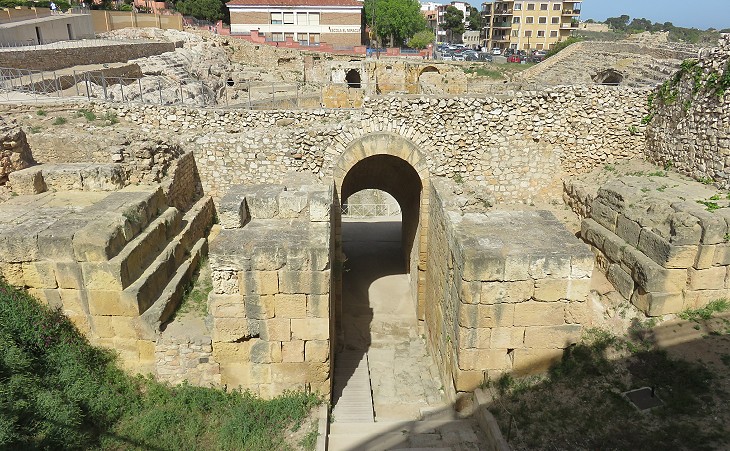 Move to Introduction and Walls and Fora, Early Christian Tarragona, Archaeological Museum or The Environs of Tarragona.