Links to this page can be found in Book 4, Map B3, Day 5, View C9, Rione Campitelli and Rione Ripa. 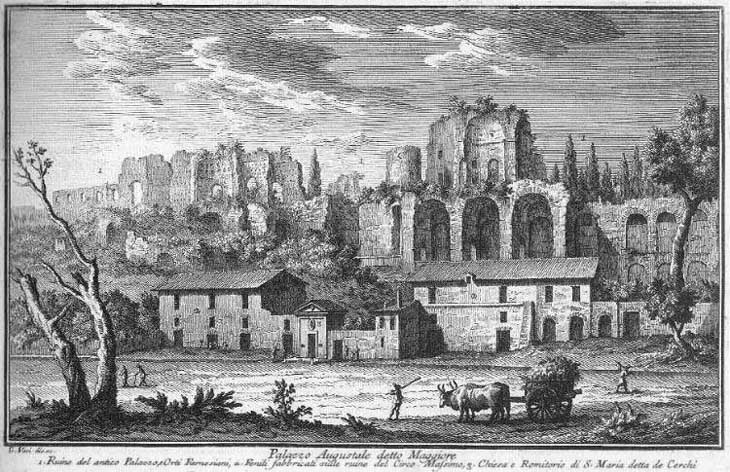 Giuseppe Vasi opened his Book on the Palaces of Rome with a special, not numbered plate dedicated to the "Palace" par excellence. In his introduction to the plate Vasi wrote: "(Readers) you should not think it a strange idea, if in showing you the magnificent Palaces of Rome I will start by showing first the ruins on the Palatine Hill, because from these ruins the word Palace originated." Actually Italian palazzo comes from Latin palatius a corruption of Palatinus with reference to the palaces built by the Emperors on that hill (which are covered in a special section). At the time of Vasi most of the hill was part of Orti Farnesiani.
The view is taken from the green dot in the small 1748 map here below. In the description below the plate Vasi made reference to: 1) Ruins of the old Palace and Orti Farnesiani; 2) Haylofts built on the ruins of Circo Massimo; 3) S. Maria de' Cerchi. The small map shows also 4) XVIIIth century building behind S. Anastasia; 5) Torre della Moletta; 6) La Vignola. The dotted line in the small map delineates the border between Rione Ripa (left) and Rione Campitelli (right). 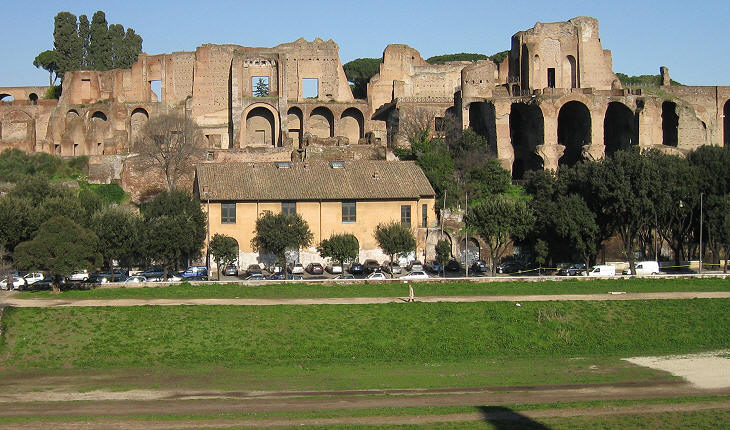 The view in January 2009. The image used as background for this page shows a detail of the palace

The photo was taken from the north side of the Aventine Hill (near Roseto di Roma): the view is almost the same as far as the ruins are concerned, whilst the shape of Circus Maximus, the ancient course for chariot races, is more clearly visible, owing to a wide redesign of the area which occurred in 1932-1935. The small chapel of S. Maria de' Cerchi was pulled down at the end of the XIXth century.

You may wish to see a 4430x630 image of the Palatine or see it in the moonlight. 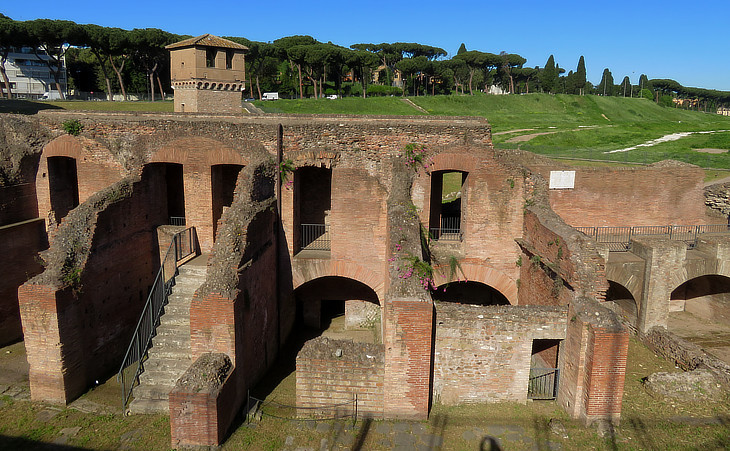 Ruins of the eastern section of Circus Maximus

From the gate of Saint Paul we returned into the City, and under the Church of Saint Gregory, where Laundresses continually wash, they say that of old the Circus Maximus, (or greatest Theater) did lie betweene the Mount Palatine and the Mount Aventine, being more then a quarter of a mile long, and halfe a quarter broad, which was built by Tarquinius Priscus for the hunting of Buls, and running of Horses, and after was inlarged by Julius Caesar and other Emperours, so as it received 260 thousand beholders, being adorned with pillars and commodious seates, and at this day the place is called Cerchi.
Fynes Moryson - An Itinerary: Containing His Ten Years Travel Through .. Italy (in 1594)
The long and narrow valley between the Palatine and the Aventine hills provided a natural setting for races. According to Livy the first races date from the time of King Tarquin the Elder, while the last race occurred in 549 at the initiative of Totila, King of the Ostrogoths. 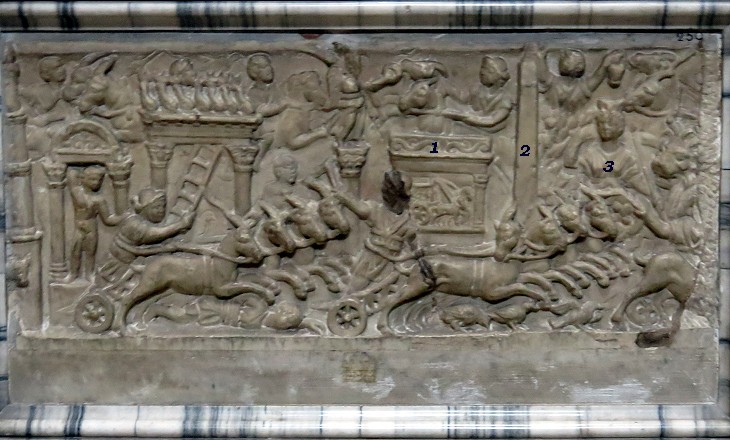 Musei Vaticani: left part of the front of a small sarcophagus depicting a race at Circus Maximus and monuments on the "spina" (from the Barberini Collection): 1) temple to the Sun where the god was portrayed riding his chariot; 2) obelisk brought to Rome by Emperor Augustus (today it stands at Piazza del Popolo); 3) statue of Cybele next to a lion

Circus Maximus was modified, enlarged and repaired many times. Its spina (thorn), the raised area around which the chariots raced, was embellished by a series of temples and altars. The monuments on the spina were depicted also in many floor mosaics, e.g. at Villa del Casale in Sicily and at Girona and Barcelona in Spain.

The agitatores (charioteers) wore a coloured costume to be more easily identifiable by the public. Eventually in the IVth century these colours acquired a political meaning; the blue charioteers were supported by the upper classes whereas the fans of the green ones came from the lower classes. Chariots raced anticlockwise so the horse on their left side was the most important one because it had a leading role at turning points. In the mosaic of Merida it was named Inluminator (light giver) because of this role.
Charioteers could earn a fortune: Publius Aelius Gutta Calpurnianus, a charioteer, was able to build a very expensive funerary monument for himself. Circus Maximus had twelve carceres (starting boxes) for a certamen ternarum, a race with three chariots per each of the four factions. 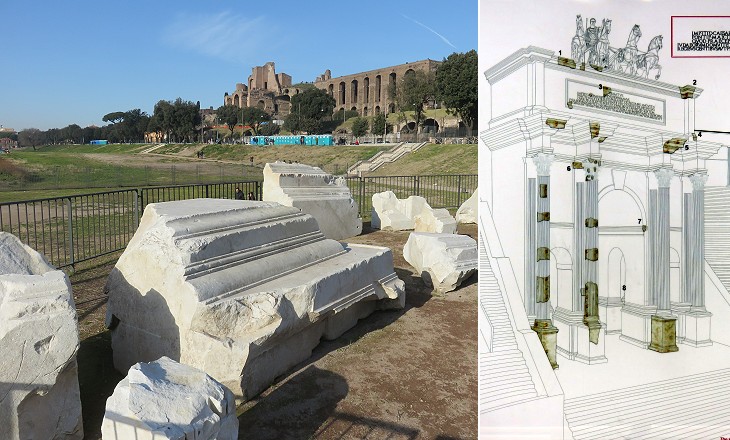 Archaeological area of Circus Maximus which was opened in 2017: marble fragments from an arch to Emperor Titus which embellished the circus

Tacitus says that Vitellius put the care of riders before that of the government. Caligula was such an ardent partisan and supporter of the squadron of the greens that he spent the greater portion of his time in their stables, rioting with them until a late hour of the night. Sometimes one squadron would remain popular and enjoy the favor and partiality of the turbulent crowds for a period of several years. From the time of Cahgula to the end of the empire of Hadrian, the greens always maintained supremacy, never losing the confidence and affection of the public.
Rodolfo Lanciani - Ancient Rome in the Light of Recent Discoveries - 1888
Some emperors were very fond of chariot races. Caligula enlarged the imperial palace on the southern side of the Palatine in order to be closer to the circus. Other emperors were less keen on these races, but they were careful not to lose the favour of the crowds and they embellished Circus Maximus. Emperor Constantius II placed a second gigantic obelisk on the spina in the IVth century (today it stands at Piazza di S. Giovanni in Laterano). 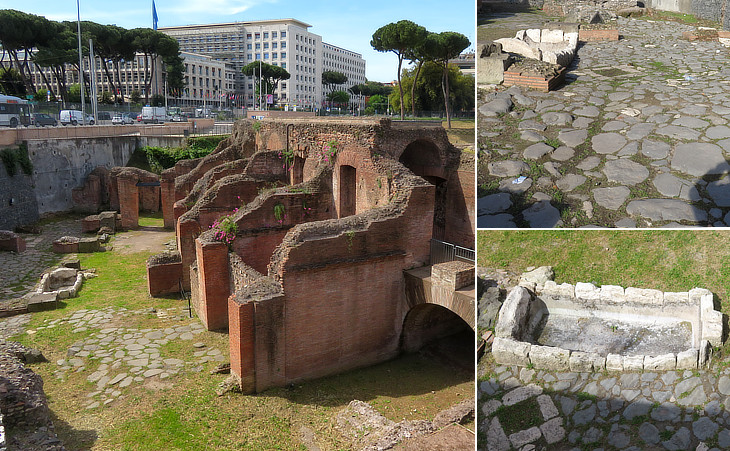 Archaeological area of Circus Maximus and in the background Palazzo della FAO: evidence of the original street level of the circus with a public fountain and the typical Roman paved road

In 1932-1935 the site of the ancient circus was cleared of all buildings (including the gas-works of Rome) and its original shape was made more clearly visible, but the actual racecourse is some twenty feet below the current ground level as recent excavations demonstrated. Until the 1930s travellers who wanted to see a circus in Rome visited Circo di Caracalla/Massenzio. 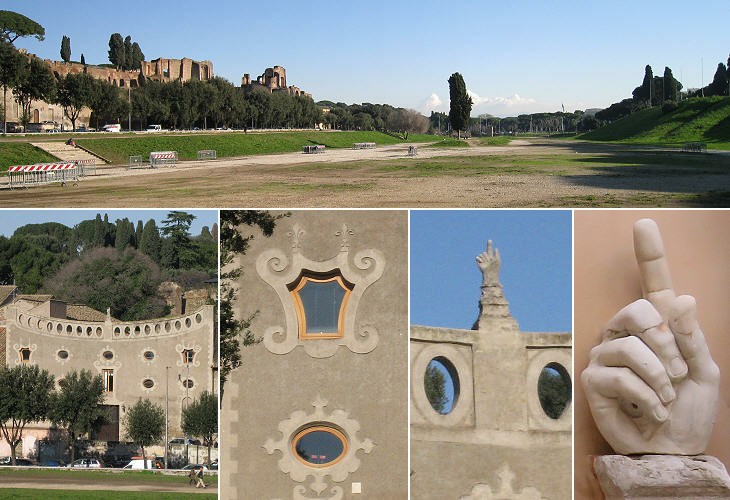 (above) View of Circus Maximus from its western end (you may wish to see the circuses of Merida, Tyre and Constantinople; (below-first three images) XVIIIth century building which was part of Orti Farnesiani near S. Anastasia; (below-last image) Musei Capitolini: hand of a colossal statue of Emperor Constantine

The hand of a gigantic ancient statue stood for some time near S. Maria dei Cerchi which for this reason was also known as S. Maria de Manu (hand). Its memory is retained by a smaller copy of the hand at the top of a building which was part of Orti Farnesiani (the windows are decorated with fleurs-de-lis, the heraldic symbol of the Farnese, the family of Pope Paul III).

The large and empty space is usually a preferred spot for joggers, but in recent years it turned out to be perfect for very large mass gatherings such as political rallies, celebrations for victories in sport competitions or other events such as the Gay Pride Parade. You may wish to learn more on how and where the Romans voice their views. 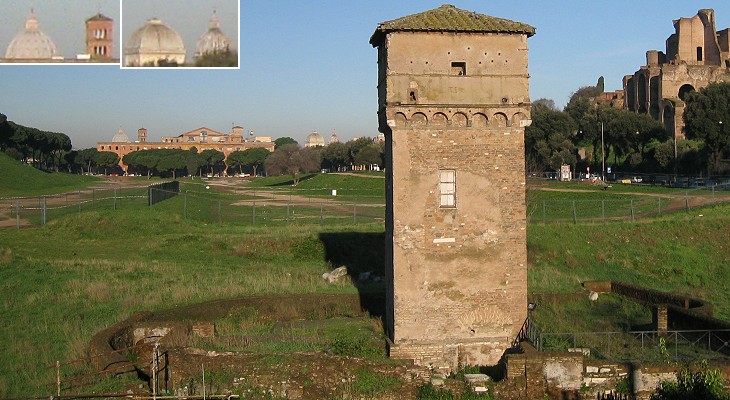 With the decline of Rome during the Middle Ages, Cloaca Massima, the sewer discharging excess water into the Tiber, was no longer maintained and small streams (marana) found their way through the abandoned parts of the city. A relatively large stream coming from the hills near Albano crossed the ruins of Circus Maximus (it is visible in the small 1748 map) and a bridge was built on it. In the XIIth century the area belonged to the Frangipane family who had turned Colosseo into their fortified residence and built other fortifications around the Palatine Hill. The stream was utilized by a small mill (moletta) and the Frangipane built a tower to protect it. Another mill on the same stream was shown by Vasi near Porta S. Giovanni. Moryson saw laundresses using the stream in 1594. It is shown on maps until the end of the XIXth century when it was channelled through underground conduits. 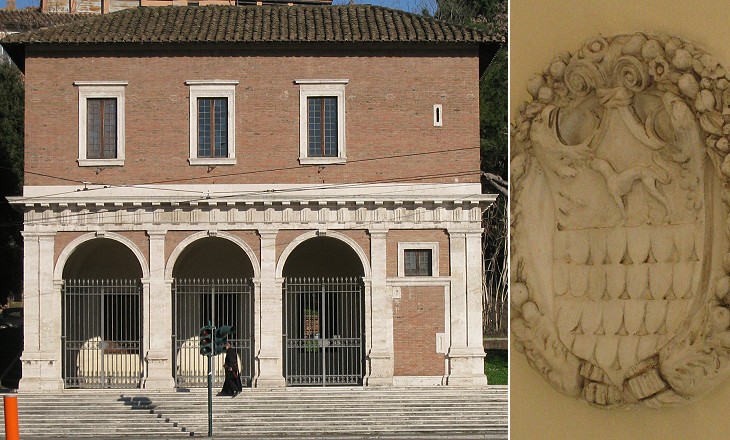 Ancient Porta Capena, the starting point of Via Appia, was located near the eastern end of Circus Maximus; in 1911 the site where the lost gate stood and nearby Valle delle Camene, the valley between the Aventine and the Caelian hills, were redesigned in order to provide an appropriate entrance to an archaeological area which included Terme di Caracalla (you may wish to see an aerial view of the 1920s - it opens in another window).
A small but elegant Renaissance building at the foot of the Aventine was pulled down and reconstructed near Circus Maximus, opposite the site of ancient Septizonium. It is called la Vignola with a reference to the XVIth century architect Jacopo Barozzi, called il Vignola, but the name is due to the fact that the building was located in a small vineyard (It. vignola) belonging to the Boccapaduli family which was situated in the western part of Terme di Caracalla.