Ripa (in today's Italian riva) means river bank and Rione Ripa includes the area on the left bank of the Tiber from Isola Tiberina to the walls surrounding Monte Testaccio. In addition to the river bank it includes the Aventine hill. It borders to the north on S. Angelo, to the east on Campitelli, to the south on the walls of Rome and to the west on the river. In the XVIIIth century only the very northern part of the rione was populated while the rest of it was split into villas and farms. 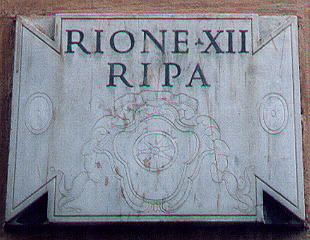 Coat of arms of Rione Ripa

The symbol of Rione Ripa is a steering wheel, a reference to its ancient river harbour.
Rione Ripa has several monuments dating back to ancient Rome, including a most unusual one: Piramide di Caio Cestio. Other well preserved Roman monuments are Ponte Quattro Capi and Tempio di Vesta, while the ruins of Terme di Caracalla still convey a feeling of what a gigantic complex of buildings these were.
After the fall of the Western Roman Empire, Rione Ripa became the preferred residence of Byzantine monks and merchants, to the point of being known as Ripa Greca: the churches of S. Maria in Cosmedin and S. Sabba belong to that period. S. Sabina and S. Balbina are examples of fortified medieval monasteries.
Bastione del Sangallo, an imposing section of the Roman walls rebuilt in the XVIth century, is the main Renaissance monument of Rione Ripa, while S. Maria del Priorato and Piazza dei Cavalieri di Malta give to Rione Ripa a touch of XVIIIth century elegance.

Detail of a Roman mosaic in Terme di Caracalla, detail of the medieval inscription over the portal of Casa di Pilato, coat of arms of Pope John XXIII in Piazza Remuria 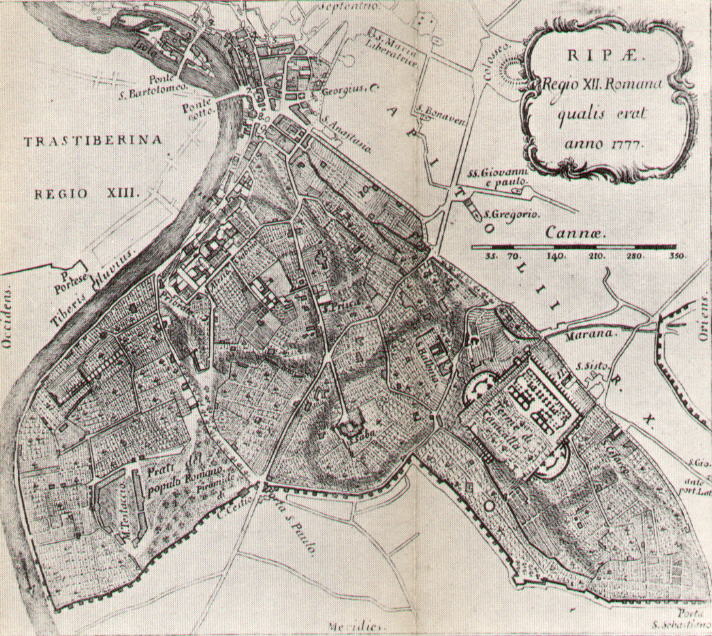 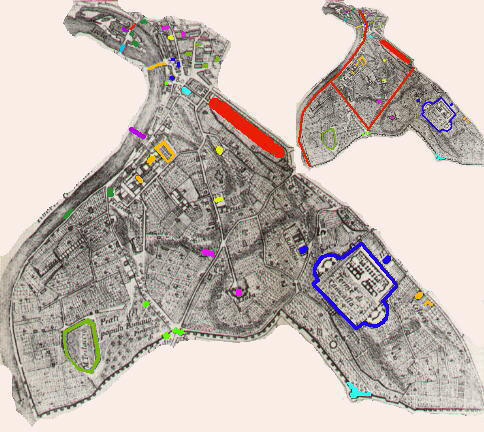 The smaller map shows the major changes which occurred after 1777:
a) red line along the river: in the 1880s huge walls were erected along the Tiber: this effort included a redesign of the river front which required the pulling down of many buildings;
b) red line from the river to Porta S. Paolo (green dots): it marks the enlargement of Via Marmorata which now separates the highly populated quarter of Testaccio from the Aventine;
c) red line from Circo Massimo (red area) to Porta S. Paolo: it marks Viale Aventino a large avenue which in a way splits the Aventine into two hills: the Aventine towards the river and San Saba towards Terme di Caracalla.
The different colours group the monuments which are shown in the same page (because of the scale of the map a few minor monuments were omitted).

The image used as background for the table shows the cross of the Knights of Malta.
You can start your tour of Rione Ripa from Santa Galla.