The name of Rione Parione is usually thought to derive from the Latin apparitores (messengers/runners) who lived in the area. It borders to the west and the north on Ponte, to the east on Sant'Eustachio and to the south on Regola. 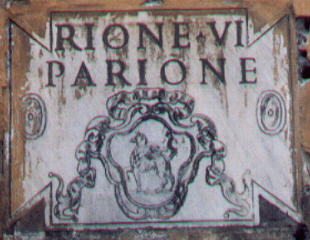 Coat of arms of Rione Parione

The symbol of Parione is a griffin or gryphon a fabulous creature with an eagle's head and wings and a lion's body.
The main square of Parione, Piazza Navona retains the design of the ancient stadium of Domitian, similarly the curved shape of Via di Grottapinta is due to the theatre of Pompey, the first built of stone theatre in Rome. The current level of the ground is several feet above that of Ancient Rome and the ruins of these monuments are buried under the existing buildings with the exception of the northern part of the stadium of Domitian, which was excavated in the XXth century.
Parione was a very commercial area with important markets in Piazza Navona and in Campo de' Fiori. The development of Parione can be associated with three periods:
a) the second half of the XVth century with the erection of Palazzo della Cancelleria and the embellishment of Campo de' Fiori;
b) the last years of the XVIth century when a very large church, S. Maria in Vallicella, was built in the western tip of Parione;
c) the years around 1650 when Piazza Navona was thoroughly redesigned.

A relief in the courtyard of a palace in Via del Parione showing the symbol of the Rione, a modern fountain where the same symbol is inserted in a copy of the coats of arms which decorate Palazzo della Cancelleria, a detail of a portal in Piazza dei Satiri near Teatro di Pompeo

Rione Parione was crossed by a section of the Papal Street, the most important street of Rome until the second half of the XVIIth century, when it was replaced by Via del Corso. The section went from Piazza dell'Orologio to Palazzo Massimi through Piazza di Pasquino. This explains why Pasquino was by far the most loquacious and stinging talking statue of Rome. Its being located along this street ensured that the satires placed on the ancient statue were read by a lot of people. 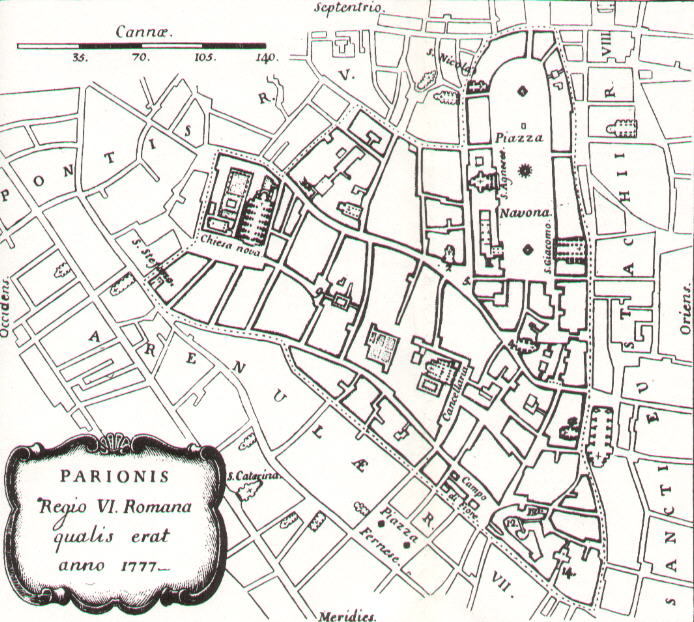 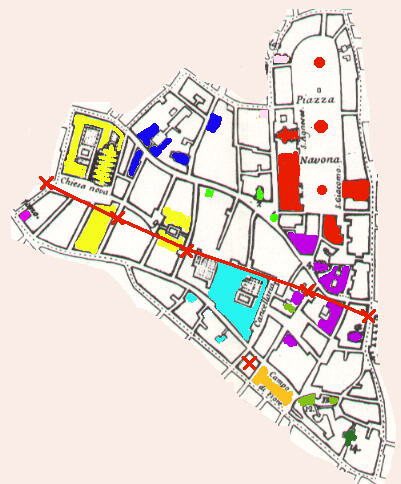 The red X mark the main changes which occurred after 1777:
a) line linking several X: in the 1880s a large road (Corso Vittorio Emanuele) ensured better communication between the Vatican and the centre of Rome: this heavily impacted on the continuity of Rione Parione which was cut into a northern section around Piazza Navona and a southern one around Campo de' Fiori;
b) X in the lower part of the map: in 1858 Campo de' Fiori was enlarged by pulling down a block of houses at its western tip.
The different colours group the monuments which are shown in the same page.

The image used as background for the table shows a detail of Fontana dei Quattro Fiumi in Piazza Navona.
You can start your tour of Rione Parione from S. Stefano in Piscinula.