Behold by Tiber's flood, where modern Rome
Couches beneath the ruins: there of old
With arms and trophies gleamed the field of Mars:
There to their daily sports the noble youth
Rushed emulous; to fling the pointed lance;
To vault the steed; or with the kindling wheel
In dusty whirlwinds sweep the trembling goal;
Or wrestling, cope with adverse swelling breasts,
Strong grappling arms, closed heads, and distant feet;
Or clash the lifted gauntlets: there they formed
Their ardent virtues.

John Dyer - The Ruins of Rome - 1740
Rione Campo Marzio retains the name that the Romans gave to the whole area between the seven hills and the river. It means Field of Mars, the Roman god of war, because the Roman army used the area to drill the troops. It borders to the west on the river and on Ponte, to the south on Sant' Eustachio, to the east on Colonna and to the north on the walls of Rome. 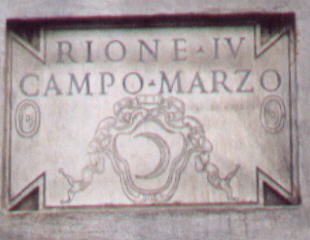 The symbol of Rione Campo Marzio is a crescent.
The main Roman monument of Campo Marzio is Mausoleo di Augusto, the tomb of the first Roman emperor. The Roman law did not allow tombs and in general burial grounds within the borders of the city, but at the time of Augustus the area was outside the pomerium, the official limit of the City. There were other Roman tombs along Via Flaminia in today's Piazza del Popolo: their ruins can still be seen in XVIth century maps. The development of the area is associated with the introduction in 1300 of the Jubilees or Holy Years. These events attracted masses of pilgrims who reached Rome via Ponte Milvio and Via Flaminia and arrived in town through Porta del Popolo. Inns for the pilgrims, the hospital of S. Giacomo degli Incurabili, the church of S. Maria del Popolo were the first monumental buildings of Campo Marzio. In the early XVIth century two Medici popes (Leo X and Clement VII) opened the two streets (Via di Ripetta and Via del Babuino) which together with Via del Corso make up the Trident with the three streets departing from the same point, where at the end of the same century Pope Sixtus V located a gigantic obelisk. While these streets had a north-south direction a new street, Via Trinitatis (today Via de' Condotti) provided an east-west connection by linking the area near Porto di Ripetta with SS. Trinità de' Monti.

Campo Marzio was embellished in the XVIIth century by the addition of S. Carlo al Corso and of the almost twin churches of S. Maria dei Miracoli and S. Maria in Montesanto. In the XVIIIth century Scalinata di Trinità de' Monti (Spanish Steps) and in the XIXth century the Neoclassic redesigning of Piazza del Popolo and the gardens of il Pincio made Campo Marzio the quarter preferred by the foreigners to the point of being called the Strangers' Quarter. 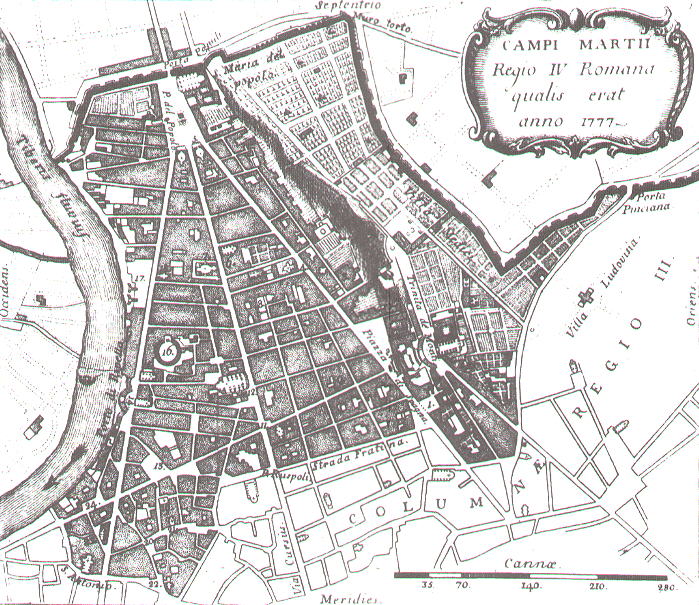 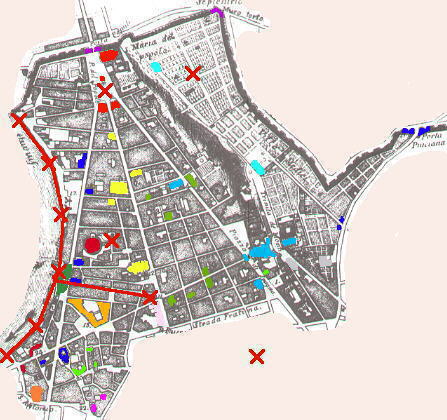 The red X mark the main changes which occurred after 1777:
a) line linking several X: in the 1880s huge walls were erected along the Tiber: this led to the loss of Porto di Ripetta;
b) two X in the upper part of the map: in the early XIXth century Piazza del Popolo was redesigned and the nearby hill of Il Pincio became a public garden;
c) X near a round building: in 1934 the area around Mausoleo di Augusto was largely modified with the loss of several old streets;
d) X at the end of a line: in 1902 a new bridge required the opening of a street leading from it to Via de' Condotti.
The different colours group the monuments which are shown in the same page.

You can start your tour of Rione Campo Marzio from Chiesa dell'Immacolata Concezione di Maria.
The image used as background for the table shows a column indicating the levels of floods near the site of Porto di Ripetta.