Rione Sant'Angelo was named after the church of S. Angelo in Pescheria. It was the smallest Rione in terms of size, but not in terms of population especially after the decree issued by Pope Paul IV in 1555, which forced the Jews of Rome to live in a segregated area in the southern part of Rione S. Angelo. It borders to the west on Regola and Sant'Eustachio, to the north on Pigna, to the east on Campitelli and Ripa and to the south on the Tiber (the long row of houses on the river was shown by Giuseppe Vasi in Plate 91). 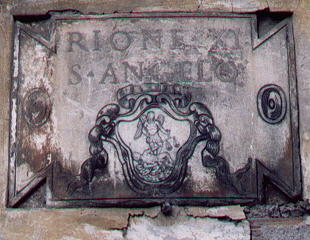 Coat of arms of Rione Sant'Angelo

The ancient symbol of Rione Sant'Angelo was a fish with reference to the fish market (pescheria) which once existed under the arches of Portico d'Ottavia. However, the XVIIIth century tablets which mark the borders of the Rione show a nobler symbol, an angel with a sword and a balance, which while being a visual translation of the name of the rione, would have been more appropriate for identifying Rione Borgo or Rione Ponte, both dominated by massive Castel Sant'Angelo.
Of its ancient past Rione Sant'Angelo retains Teatro di Marcello and Portico d'Ottavia. Columns and reliefs can be seen in many buildings (e.g. Casa di Lorenzo Manilio, Tor Margana, Palazzo Patrizi, etc..). The majority of the monuments of the Rione belong to the XVIth century or to the first years of the following century. 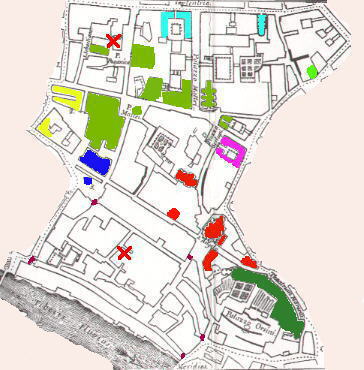 The red X mark the main changes which occurred after 1777:
a) top left corner: in the XIXth century the old church of Santi Sebastiano and Valentino and its little square were replaced by a large building;
b) lower part of the map: the whole Jewish ghetto was demolished in 1888 and it was replaced by modern buildings. The ghetto was subject to frequent floods so in 1888 the level of the ground was significantly raised. Tempio Maggiore, the main synagogue, was built with a square dome which soon became one of the best known Domes of Rome.
The different colours group the monuments which are shown in the same page.

An inscription immediately outside the Ghetto stating the level reached by the Tiber during the 1598 flood; Roman decorations walled in a house of Rione S. Angelo; the Dome of Tempio Maggiore

The image used as background for the table shows a detail of Fontana delle Tartarughe.
You can start your tour of Rione Sant'Angelo from S. Stanislao dei Polacchi.