Piazza Montanara
(Vasi at work in the Grand View of Rome)

Links to this page can be found in Book 2, Map C3, Day 5, View C9, Rione Campitelli and Rione Sant'Angelo. 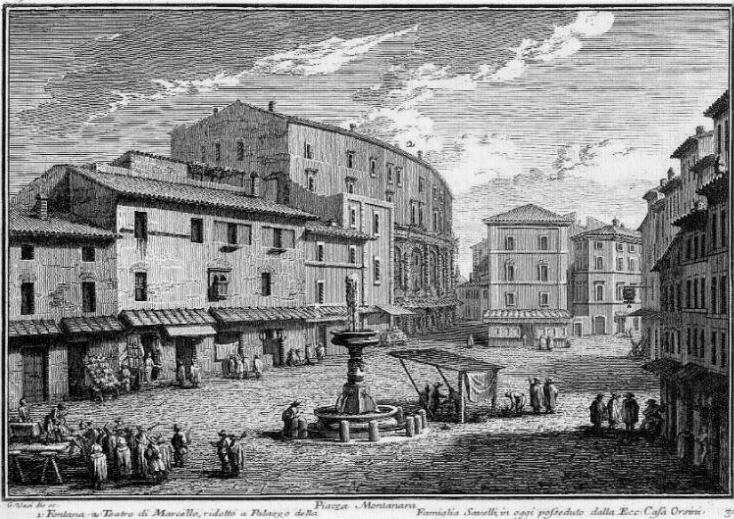 The second book of etchings which Giuseppe Vasi published in 1752 was most likely that which sold best. It covered the most famous squares of Rome and in doing this it showed many monuments of Ancient Rome. An etching depicting Piazza Montanara did not say much to a foreign traveller imbibed with classical studies, but it showed Teatro di Marcello, thus becoming a memento to bring home.
Piazza Montanara owes its name to the peasants from the mountains near Rome, who congregated there for their shopping (or for having a tooth pulled or on some other business) after visiting the nearby cattle market (Campo Vaccino i. e. the Roman Forum). You may wish to see an engraving by Domenico Pinelli showing players of bagpipes at Piazza Montanara and a 1905 painting by Alberto Pisa. According to others the name comes from a Montanari family which resided in the area.
The view is taken from the green dot in the small 1748 map below. In the description below the plate Vasi made reference to: 1) Fountain; 2) Teatro di Marcello (Palazzo Savelli Orsini). The small map shows also 3) Monastero di Tor de' Specchi; 4) the former location of S. Rita da Cascia. The dotted line in the small map delineates the border between Rione Sant'Angelo (lower left corner) and Rione Campitelli. 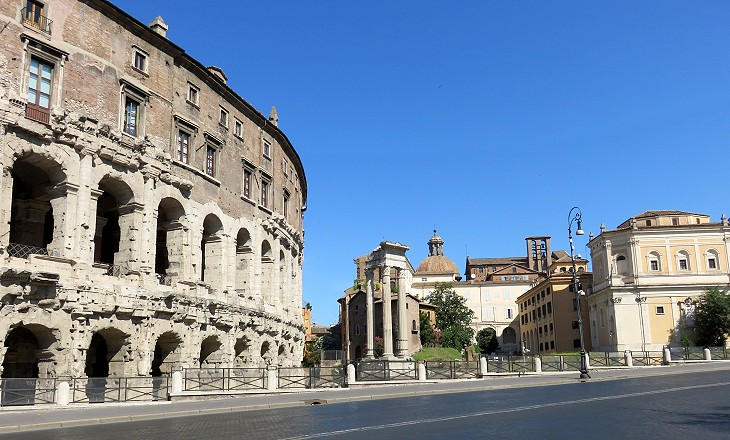 In 1926-1930 the neighbourhood between the Campidoglio Hill and the River Tiber was the object of many demolitions which were aimed at isolating the ancient monuments and at opening Via del Mare, a new road linking the city centre with the southern part of Rome and eventually with Lido di Ostia, its modern beach. 1) Plaque celebrating the beginning of works aimed at freeing Teatro di Marcello from "decaying houses and taverns" (May 1926); 2) Prime Minister Benito Mussolini visits the site in 1927; he is portrayed in his usual akimbo pose (photo of Istituto Luce); 3) 1883 Baedeker's map of the area (in red the location of the lost churches of S. Andrea in Vincis and SS. Orsola e Caterina); 4) current map: Via del Teatro di Marcello is a section of the new road

Initially the plan of the government was limited to restoring the original aspect of the theatre, but the demolition of the nearby buildings led to unearthing the site of ancient temples. The scope of the plan was revised and it eventually led to the loss of the whole Piazza Montanara and of two nearby small churches. The fountain was relocated opposite Palazzo Lancellotti in another part of Rome. 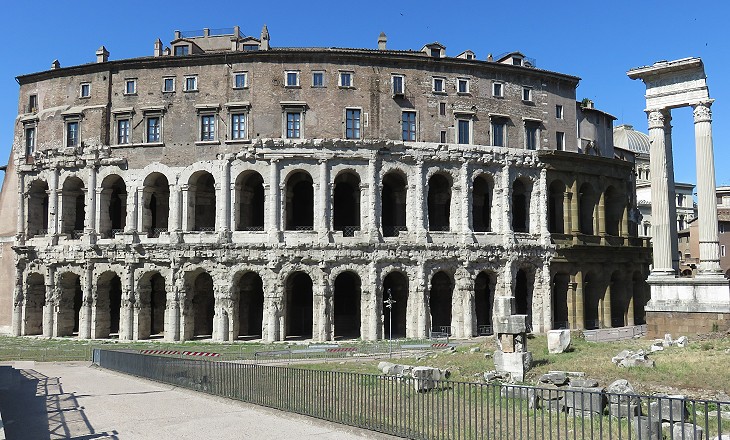 The theatre was initiated by Julius Caesar and it was completed by Emperor Augustus who in 13 or 11 BC dedicated it to Marcus Claudius Marcellus, his beloved nephew and presumptive heir who died in 23 BC at the age of twenty. He was the son of Ottavia, Augustus' sister, to whom a nearby portico was dedicated. The theatre had two rows of arches decorated with semi-columns of the Doric and Ionian orders and most likely an attic with a Corinthian order decoration, similar to that of Colosseo (it opens in another window). During the Middle Ages it was used as a fortress which controlled access to Ponte Quattro Capi, the bridge leading to Isola Tiberina. It was acquired by the Savelli in the XIIIth century. In 1523-1527 the building was turned into a Renaissance palace by Baldassarre Peruzzi. The site was known as Monte Savello. In 1787 Antoine Vaudoyer reported the results of his studies on the original layout of the ancient theatre to the governing body of Accademia di Francia in Roma. He and his friend Delespine were boarders of that institution and eventually they became leading architects in Paris. You may wish to see the Theatre of Orange, one of the best preserved theatres of the Augustan age. 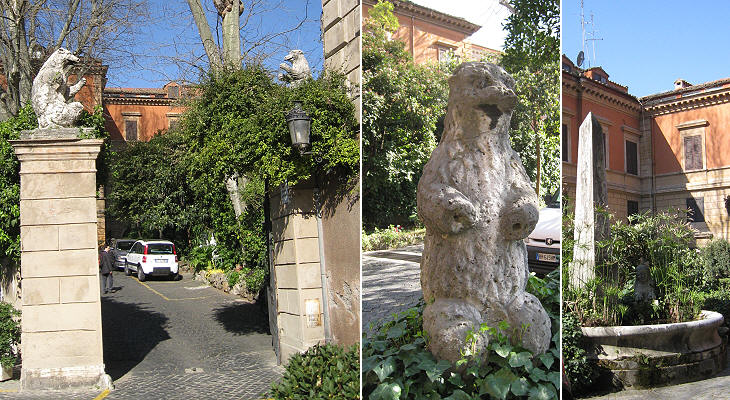 (left) Entrance to Palazzo Orsini; (centre) another bear in the garden; (right) fountain with a small (not original) obelisk

In the XVIIIth century the Orsini bought the palace. Its inner part was redesigned during the XIXth century and it is of little interest. The Orsini (orso=bear) placed their heraldic symbols at its entrance (see the image used as background for this page) and in the garden. 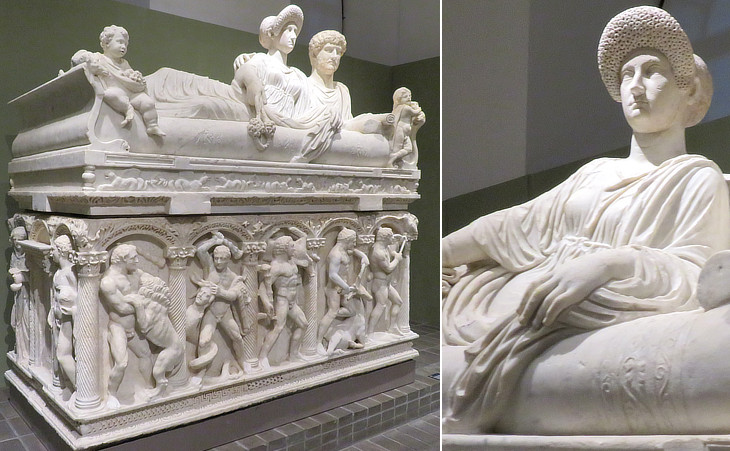 Collezione Torlonia: highly restored sarcophagus found in the ruin of the theatre; it was part of the Savelli collection of antiquities; the relief on the box depicts the Labours of Hercules, the woman's hairstyle was in fashion in the late Ist century AD and in the early IInd century AD 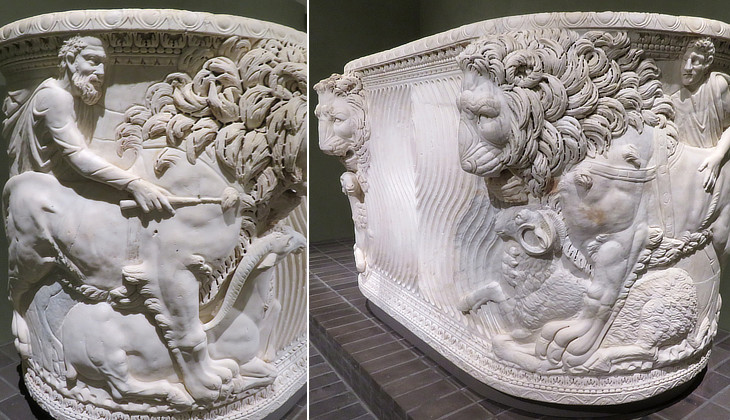 Collezione Torlonia: sarcophagus found in the ruin of the theatre which was part of the Savelli collection of antiquities; it shows two "magistri" attendants in charge of the beasts, and it is very similar to one in Museo Pio-Clementino 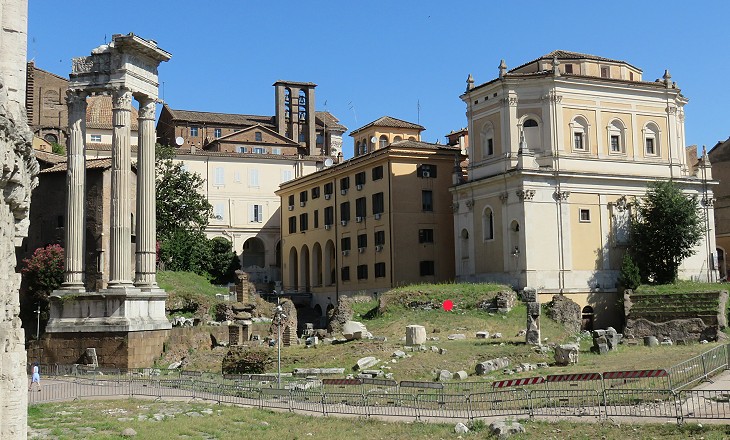 Three reconstructed columns of Tempio di Apollo Sosiano and podium (red dot) of Tempio di Bellona (with S. Maria in Campitelli in the background between them and S. Rita da Cascia to the far right)

The demolition of the buildings near Piazza Montanara led to finding the site of a temple built by Gaius Sosius and dedicated to Apollo: three columns have been re-erected; next to them there is the podium of the Temple to Bellona (goddess of war), the starting point of triumphal processions; see the Temple to Bellona at Ostia and learn how the Romans declared war.
Gaius Sosius was a Roman politician, best known for having contributed to place Herod upon the throne of Jerusalem. He sided with Mark Antony during the Civil War and he commanded part of the fleet at the battle of Actium where he was captured. He was pardoned by Octavian (Augustus) and he returned to Rome where he dedicated a temple to Apollo, because Augustus was devoted to that god. 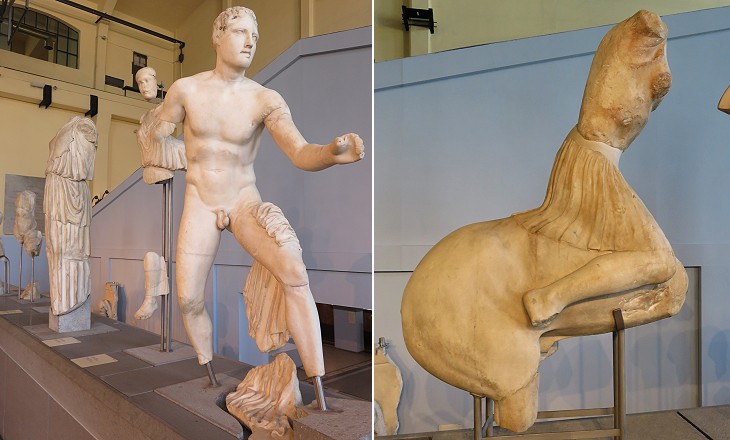 Centrale Montemartini: statues in the pediment of the Temple to Apollo: (left) Hercules; (right) an Amazon

The fragments of statues which decorated the pediment of the temple have puzzled archaeologists because their style indicates they were made in the Vth century BC. They depict the ninth labour of Hercules, in which the hero fights against the Amazons. In this particular pediment he is helped by Theseus, the founder of Athens. It has been suggested that the statues might have embellished the Temple to Apollo Daphniforos at Eretria, a town on the island of Euboea. We know from Pliny that many Greek statues were moved to Rome by Augustus and his friends. 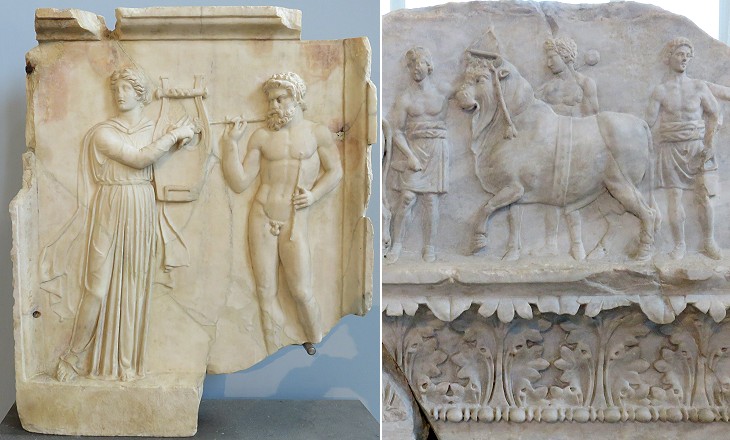 Centrale Montemartini: reliefs from the Temple to Apollo: (left) Apollo and Marsyas; (right) triumphal procession involving the sacrifice of a bull (see a similar relief on Trajan's Arch at Benevento)

The rest of the decoration of the temple was made at the time of its construction. In part it is related to events concerning Apollo, but a frieze is believed to depict the triple triumph which was celebrated by Emperor Augustus in 29 BC for his victories in Europe, at Actium and in Egypt. 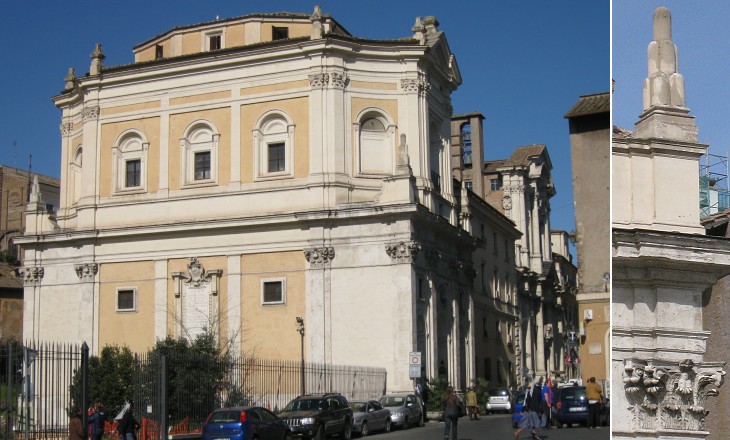 (left) S. Rita da Cascia and in the background S. Maria in Campitelli; (right) the six mountains which were the heraldic symbol of Pope Alexander VII

This little church was located near the steps leading to S. Maria in Aracoeli and it was re-assembled in 1940 between Teatro di Marcello and Monastero di Tor de' Specchi. It was designed by Carlo Fontana for Pope Alexander VII; it is one of the very first works of this architect. 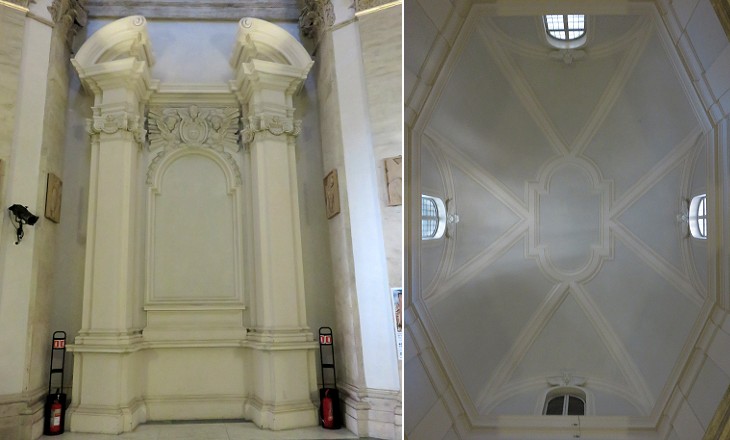 The church belonged to a brotherhood among the inhabitants of Cascia, a town in Umbria, who lived in Rome and it was dedicated to Blessed Rita da Cascia (see a list of Roman churches belonging to foreign communities). In 1904, after the canonization of Blessed Rita in 1900, S. Maria delle Vergini in Rione Trevi was dedicated to the new saint. 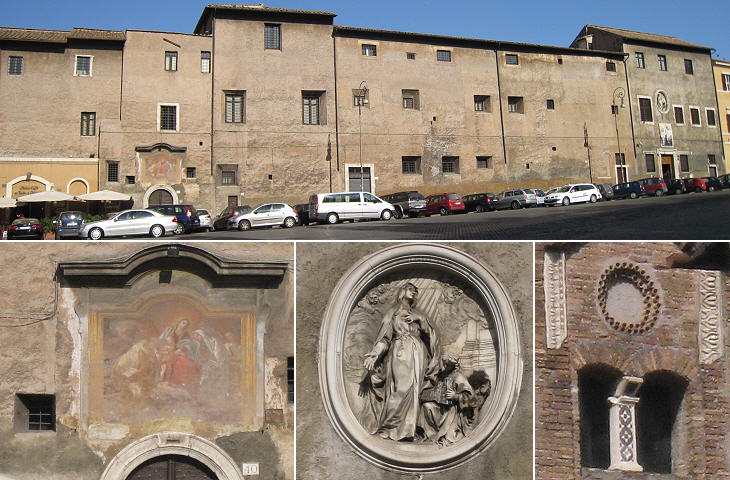 (above) Overall view; (below - left) XVIIIth century painting above the older entrance; (centre) relief attributed to Filippo della Valle above the other entrance; (right) medieval window

Monastero di Tor de' Specchi is the only medieval building which was spared by the demolitions. It was founded by St. Frances of Rome in 1425. The nuns who live here make vows of seclusion. The thick walls and the small windows protect them from the temptations of modern life. The door to the left leads to the older part of the building where early Renaissance frescoes show the saint tempted by Evil. The door to the right leads to S. Maria Annunziata, a church which was built in the XVIIth century for the sole use of the nuns. It actually consists of two churches one above the other and it does not have a façade. 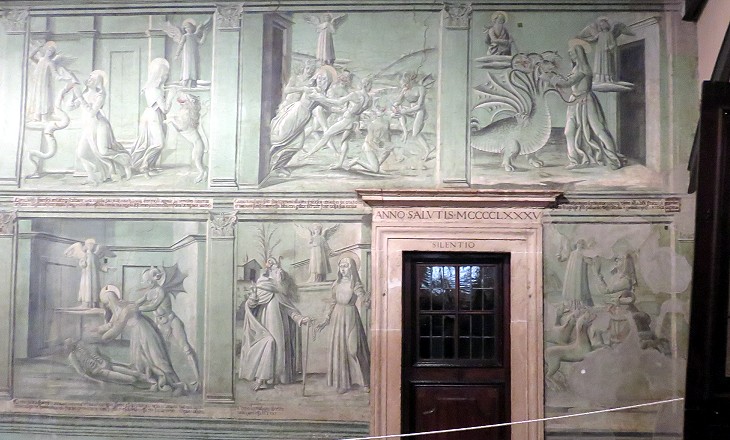 Refectory: details of the frescoes depicting the Temptations of St. Frances of Rome who is always followed by a small angel (see her statue with an angel in Piazza S. Pietro)

St. Frances of Rome was the wife of a Ponziani, a wealthy family of Trastevere. When she died in 1440 most likely she did not foresee becoming in 1925 the patron saint of car drivers; this because it is said that an angel held a light before her when she travelled. She was canonized in 1608 and a church where she used to pray was dedicated to her. On March 9, the feast of St. Frances of Rome, the nunnery is open to the public. 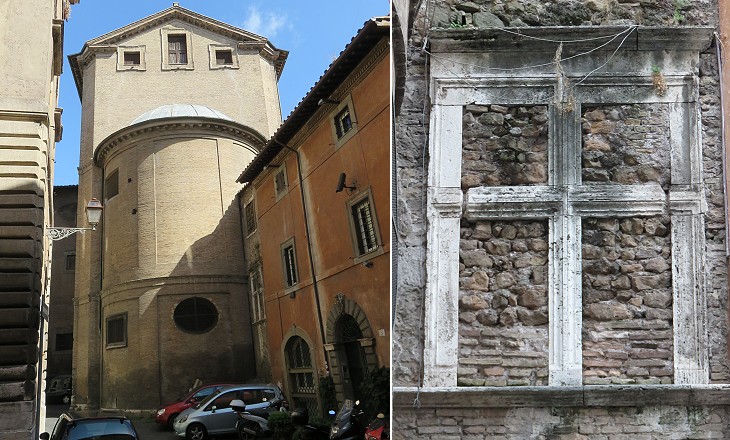 (left) View of the rear side of S. Maria Annunziata; (right) a XVth century window

Tor de' Specchi means Tower of the Mirrors (to me it brings to mind They Do It with Mirrors, an Agatha Christie novel featuring Miss Marple). Most likely it was a medieval tower which was incorporated into the nunnery. The mirrors could have been circular windows or hemp spinning wheels (which shone from a distance). You may wish to see a coat of arms of the monastery showing a tower and a mirror.