in the reliefs of Arco di Tito

Emperor Nero had many clashes with the Roman Senate and in 66 AD a conspiracy involving several senators aimed at ousting him from power narrowly failed. In 68 however the legions in several provinces of the Empire rebelled and threatened to march towards Rome. The Roman Senate ratified the election of Galba, the head of the legions in Spain, as the new emperor: Nero, betrayed by his closest friends, left the imperial palace but just outside Rome he put an end to his life by asking a former slave to kill him. This event marked the tragic end of the first Roman dynasty.
The next year (69 AD) was called the year of the four emperors, because the praetorians killed Galba and elected to the throne Otho, who was defeated soon after by Vitellius, head of the legions in the Rhine valley. Vitellius marched towards Rome, but the legions in Judaea rebelled and elected Vespasianus Flavius (Vespasian), their commander . Vitellius was killed during another rising of the praetorians in Rome and eventually the Senate ratified the election of Vespasian.
The new emperor was not a Roman, as he was born in Sabina a region north of Rome, and this was clearly an element which weakened his authority; in addition his election had been the outcome of a confused process during which the Roman Senators had tried to recover their ancient role. Vespasian and his sons and successors Titus and Domitian (the Flavian dynasty) developed a policy aimed at curbing the role of the Senate by gaining the favour of the lower classes and at associating the memory of Nero with all sorts of misbehaviours: this objective was so successfully achieved that Nero himself became the symbol of cruelty and madness and only very recently a more balanced view dismissed some of the crimes traditionally attributed to the young emperor. Panem et circenses (bread and entertainment) is all that the Romans asked for, according to the writer Juvenal, who gave in his Satires a harsh portrait of the Roman society during the Flavian dynasty. Vespasian linked his name to the Colosseo and Domitian to a large stadium in today's Piazza Navona. In these large buildings the Romans were offered various types of shows, ranging from exhibition of exotic animals to naval battles (the purported cruelty of some of these shows is most likely exaggerated). The name of Titus is associated with a triumphal arch erected in his honour by his brother Domitian after his death. The inscription above the arch says SENATUS POPULUSQUE ROMANUS DIVO TITI DIVI VESPASIANI F.(ilio) VESPASIANO AUGUSTO (the Senate and the people of Rome to the divine Titus Vespasian Augustus, son of the divine Vespasian). The use of the adjective divo means that the arch was erected after the death of Titus in 81 AD because the emperors were divinized only after their death. 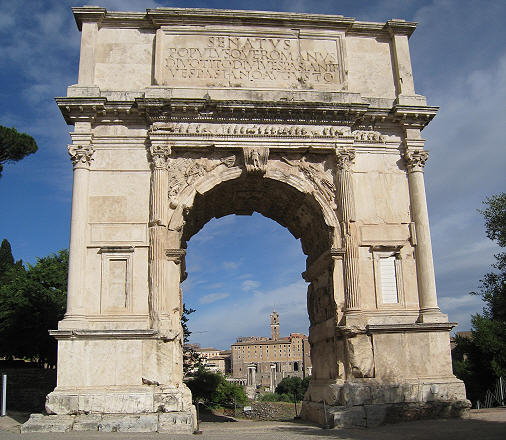 The old part of the arch. In the distance: Palazzo del Campidoglio

The arch is located in the Roman Forum and only its central part is original. In the XIIth century it became a gate in the walls erected by the Frangipane family to protect their "fortress" built on a section of the Colosseum. The arch was rebuilt in 1824 by Luigi Valadier at the request of Pope Pius VII. The reconstructed part is easily identifiable because Valadier preferred to use travertine for it, rather than the white marble used by the Romans. In the vault a relief shows the divinization of Titus who is portrayed on an eagle carrying him to Heaven. In order to ensure a smooth succession process in 71 Vespasian associated Titus as co-ruler in the emperor's role and had this decision ratified by the Senate. Titus reigned alone for a very short time (79-81), enough however to gain the title of delight of mankind for his generosity and clemency. The Triumph of Titus

Inside the arch two reliefs portray the triumph of Titus which was celebrated in 71, when he returned to Rome after having put down a rebellion of the Jews (although the last Jewish fortress of Masada fell in 73). The triumph was accorded by the Senate to the generals who had expanded the empire: it consisted in a procession starting at Tempio di Bellona (goddess of war) near Teatro di Marcello and reaching Tempio di Giove Capitolino on the Campidoglio. The procession did not follow a straight route but followed the river and then went around the Palatine to eventually reach the temple through Via Sacra the main street of ancient Rome. The general wore a golden crown which he offered to Jupiter. It is debatable whether Titus had expanded the empire, because Judaea was already part of the Roman Empire, ruled by a Roman governor. Within Judaea the Jews had retained a certain autonomy and had their own kingdom and rules, but these were lost as an effect of Titus' victory. The Senate thought these changes justified the triumph. The relief shows Titus and a winged victory on a quadriga (a chariot with four horses abreast). The man walking near the chariot represents the Genius of Rome. 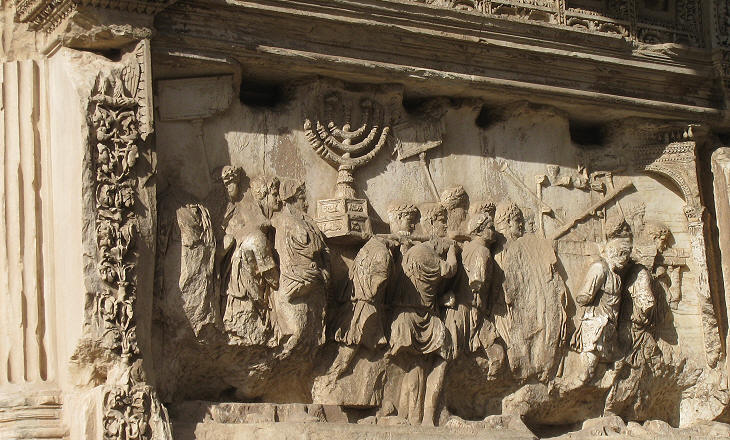 The Sack of Jerusalem

The quadriga was preceded by the chained enemies. The Roman generals often tried to capture alive their opponents to parade them in their triumph. Paid actors made jokes at their passage. They were usually strangled after the event in a jail at the foot of Campidoglio. Then came the spoils brought to Rome. In some cases these included wild animals the Romans had never seen before. The sack of Jerusalem is symbolized by the seven-branched candlestick. Vespasian and Titus had to face several rebellions, especially in Gaul and these constituted by far a greater threat than the rebellion of Judaea, a remote province. While on the west the Romans felt free to impose their way of life, when they expanded eastwards they soon realized their conquests could not be maintained without gaining the hearts of the subjugated peoples. The emphasis given to this victory is most likely due to the fact that Domitian was courting the anti-Jews feelings which were widely spread in the eastern hellenized part of the Empire.

Augustus commissioned to Virgil his main poem Aeneid, which established a link between the Greek world and Rome, by including among the Roman ancestors, Aeneas, a Trojan prince. According to Virgil, Anchises, father of Aeneas, foretold the mission and the role of Rome. The prophecy was aimed at giving a legitimacy to the Roman rule. In his speech Anchises spelled out the future policy of the Roman Empire: Parcere subiectis et debellare superbos (be magnanimous with those who voluntarily accept your rule and destroy those who try to maintain their independence). The harsh treatment of the Jewish rebellion can be explained as an application of this policy. 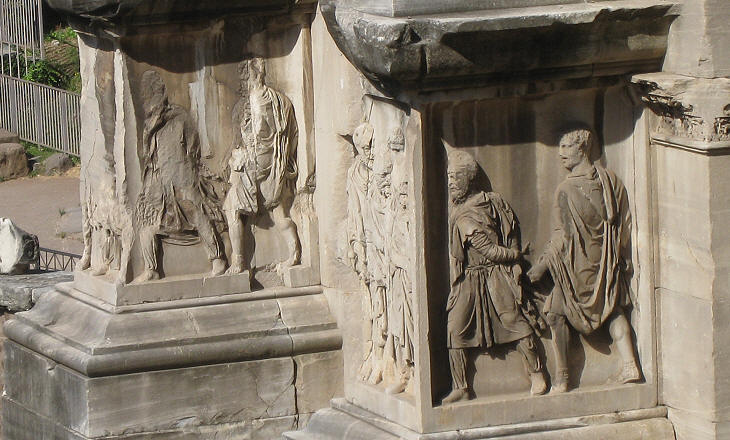 Reliefs in the lower part of Arco di Settimio Severo

We do not know if there were other reliefs on the lost part of the arch. A subject recurring in other Roman arches is the portrayal of prisoners of war. Arco di Settimio Severo has 24 reliefs showing with minor variations the same scene: a prisoner of war in the act of being directed by a Roman. The repetition shows that the Romans knew that the impact on the viewer of seeing a prisoner of war was by far greater than that of seeing a killed enemy. 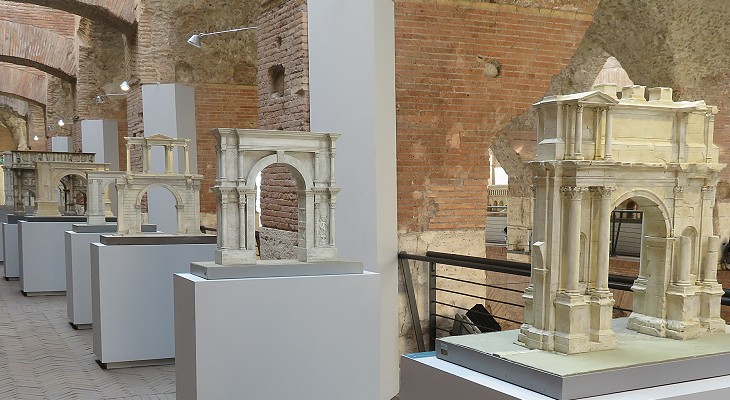 Museo della Civiltà Romana (temporary exhibition at Mercati di Traiano): models of Roman triumphal arches; in the foreground: Arch of Caracalla at Cuicul (Djemila) in Algeria, an arch at Besançon in France and the Arch of Hadrian in Athens