- Cuicul: New/Severian Town
(detail of a mosaic at the Museum of Cherchell)

You may wish to see an introductory page to this section or a page on the Old Town first. 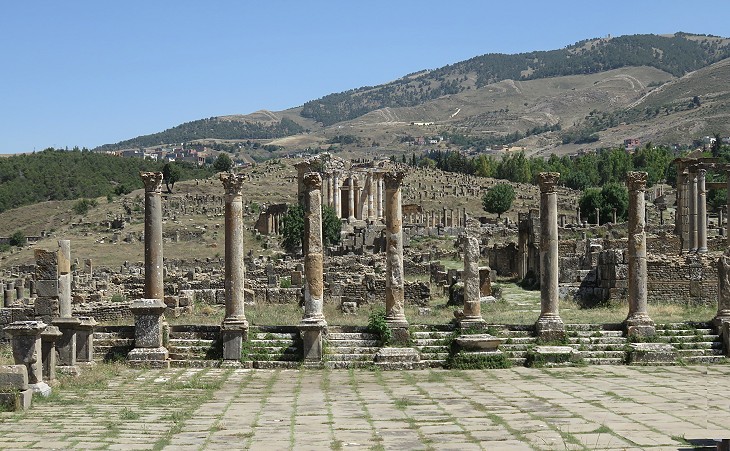 The New/Severian town seen from the Old Forum

Towards the middle of the IInd century the original settlement proved incapable of containing the increasing population of Cuicul. A new neighbourhood was developed on the slope of a hill that rose to the south. In the first half of the XXth century French archaeologists identified and partly reconstructed many monuments that marked this expansion of the city. They included rich private buildings and dwellings, an arch erected by Emperor Caracalla, the temple to the family of Emperor Septimius Severus, a new forum, a theatre (already completed at the time of Emperor Antoninus Pius) and baths built during the reign of Emperor Commodus. 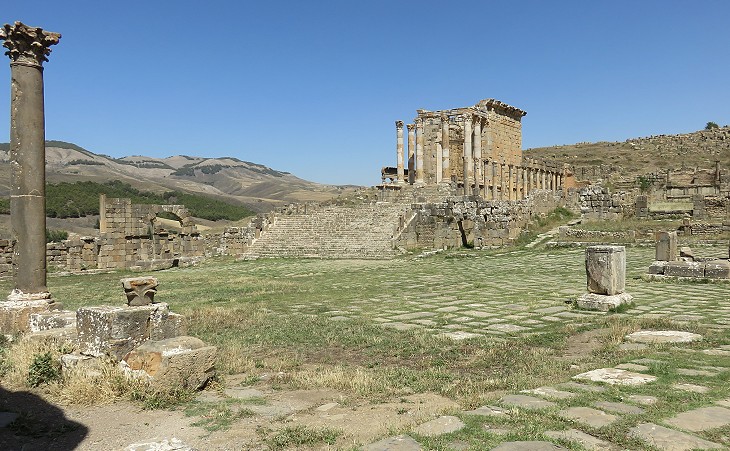 A large square separated the old town from the new development. It had porticoes on its two long sides. It was crossed by Cardo Maximus and the extension of the street to the new quarters was marked by an arch which is shown in the introductory page.
Archaeologists have identified some buildings and facilities which were located in the square, but they were unable to reconstruct them: they included the high podium of a temple from which announcements could be made, a cloth marketplace, a high cistern and public latrines. 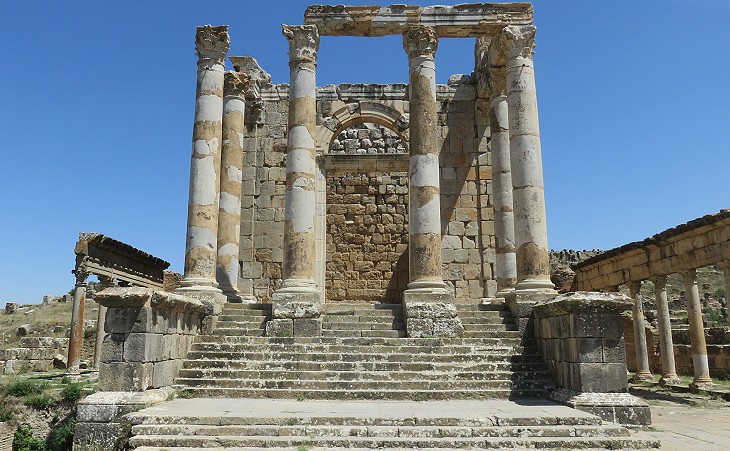 The square was dominated by a temple dedicated to Emperor Septimius Severus and Empress Julia Domna, his wife. It housed their gigantic statues of which archaeologists have been able to recompose the heads in the museum. The design of the temple is interesting because of the arched entrance to the cella, which departs from classic patterns. 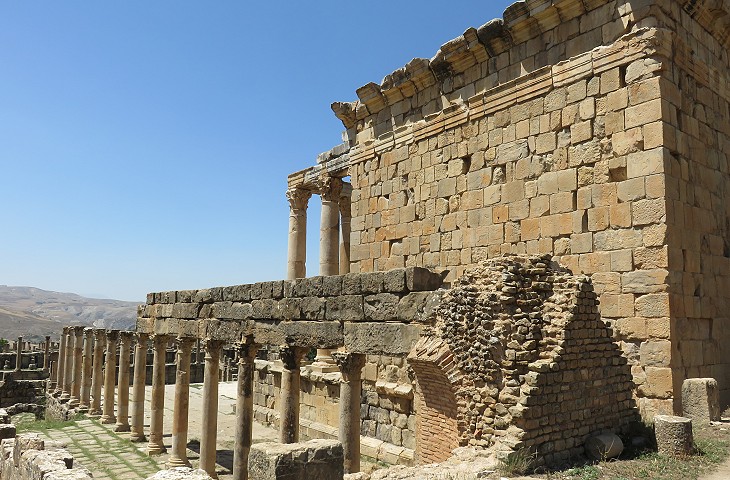 Severian Temple and the western colonnade at its side

The temple is very well preserved. It stands on a terrace and it was flanked by two colonnades, similar to those of the very imposing Roman Temple to Venus and Rome which also stood on high ground. 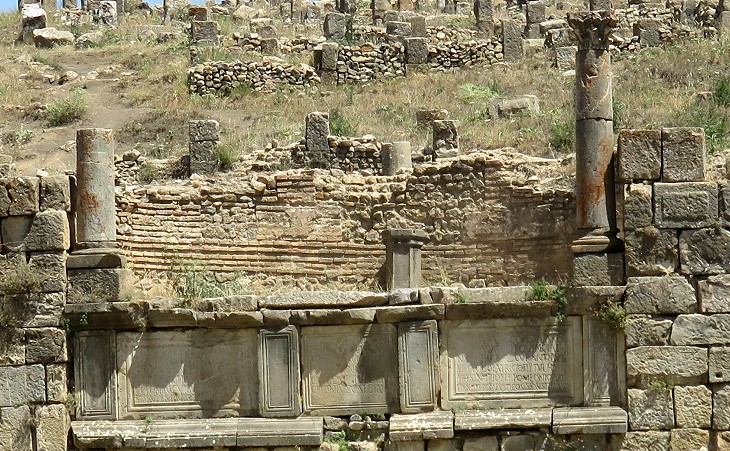 Inscriptions and columns from a IVth century civilian basilica

Archaeologists were puzzled by an inscription of the time of Emperors Valentinian I and Valens celebrating the construction of a basilica egestis ruderibus quae ipsis iam altiora essent culminibus civitatis, by clearing the ground from ruins which were higher than the buildings of the town. It has been suggested that these ruins were caused by destructions originated by Donatist riots or alternatively by an earthquake, which however did not cause great damage to the Severian Temple. The basilica replaced a temple to Frugifer, patron of agriculture, an indication that the worship of the ancient gods had come to an end in this part of the Roman Empire before it was formally forbidden. 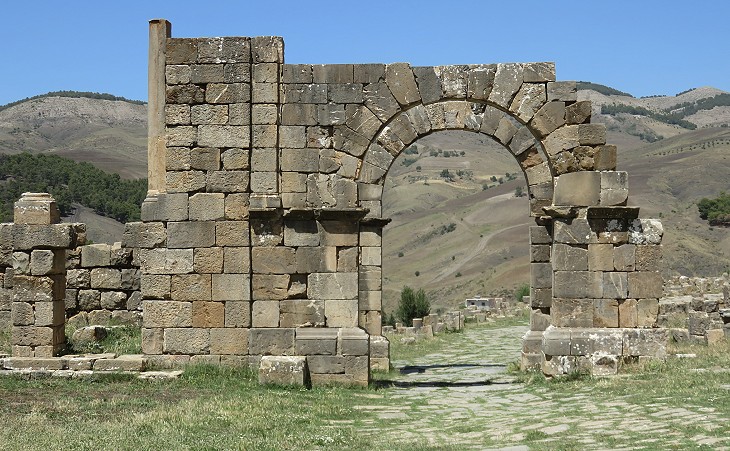 Double eastern entrance to the Severian square: the road led to the theatre and eventually to Cirta/Constantina

In this arid splendour we wandered all day long. Little by little the wind, hardly felt at the beginning of the afternoon, seemed to grow with the hours and fill the whole landscape. It blew from a gap in the mountains, far away to the east, hastened up from the depths of the horizon, and bounded, cascading, amid the stones and the sun. Without cease, it whistled powerfully through the ruins, bathed the heaps of pitted blocks, surrounded each column with its breath, and came to spill out in unceasing moans over the forum that lay open to the sky. I felt myself shaking in the wind like a mast.
Albert Camus - The Wind at Djemila - 1936 - translated by Ellen Conroy Kennedy 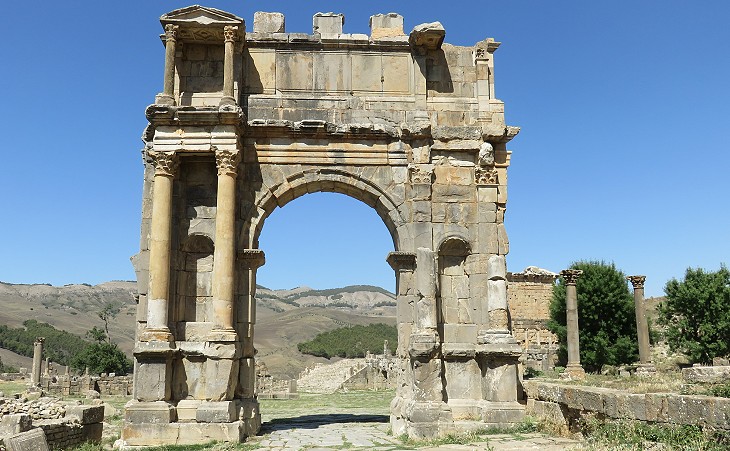 Arch of Caracalla: external side (see other large triumphal arches at Thamugadi and Volubilis in Morocco)

In 216 the authorities of Cuicul erected a triumphal arch to celebrate Emperor Caracalla, his living mother Julia Domna and his deceased father Septimius Severus. The arch retains the bases of the three statues which stood at its top. Other statues were situated in the niches of the arch. Its design is rather unique especially because of the two square aedicules at the sides of the inscription. Emperor Septimius Severus was particularly popular in Numidia because he was of Roman descent, but was born at Leptis Magna, which at the time was part of the neighbouring province of Africa. Travellers coming from Mauretania entered the town at its western end through this arch. 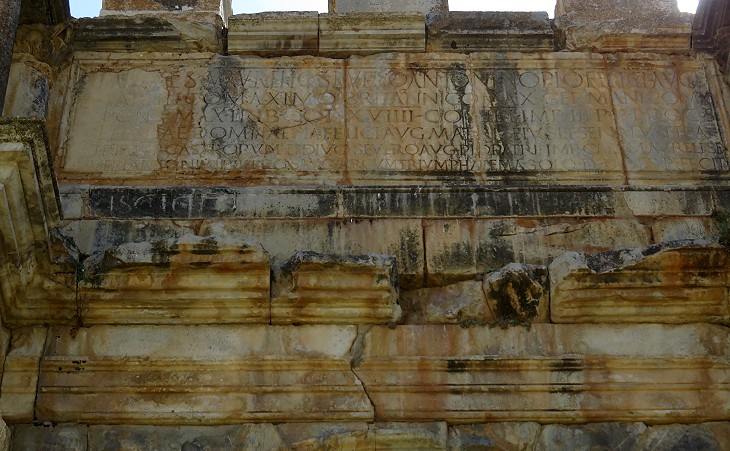 Arch of Caracalla: inscription on the town side

The inscription testifies to the importance of Julia Domna, perhaps the empress who held more power in the history of the Roman Empire, excluding its Byzantine phase. In this arch the inscription places her in second place, after Caracalla, the incumbent emperor, but before her deceased husband. The dedication is as follows (C.I.L. VIII, 8321): Cuicul had a number of public fountains, one of which had a design very similar to Meta Sudante, a lost Roman fountain near Colosseo. A conduit inside the fountain carried the water to the top, from which it slid down on the surface of the conical section. 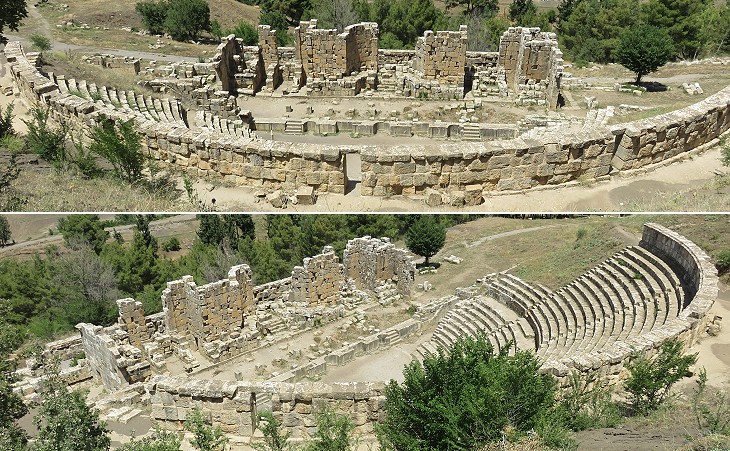 An inscription says that the theatre was built in 161 at the initiative of Caius Julius Crescens and Caius Julius Didius Crescentianus, who decorated it with statues of Fortuna and Mars, patrons of Cuicul. Didius Crescentianus is mentioned in another inscription for having built a basilica near the temple to Venus Genetrix in the Old Forum. The theatre stood on the steep slope of the eastern ravine and it could seat approximately 3,000 (the population of Cuicul is estimated to have been in the region of 10,000). The wall behind the stage retains the three entrances from which the actors made their appearance. The low wall supporting the stage was decorated with alternate square and round niches, a feature which can be seen in most Roman theatres, e.g. at Bosra. 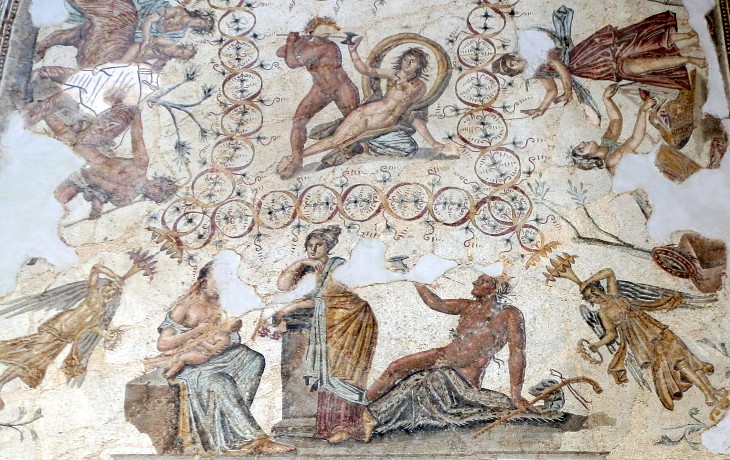 Museum of Djemila: floor mosaic from the House of Dionysus/Bacchus; the central scene shows Ambrosia, a nymph, who is about to be metamorphosed into a fruiting grapevine while King Lycurgus, an enemy of Dionysus, slays her with an axe (see this subject in a mosaic at Vienne in France)

The new neighbourhood housed some very rich houses which were decorated with fine mosaics. The House of Bacchus was very large and it is thought that its halls could house meetings, maybe banquets, of worshippers of the god. Studies on the techniques employed in the mosaics suggest that some of them were made in the second half of the IVth century and even later. A museum at the entrance to the archaeological site houses many fine mosaics, some of which are of a very large dimension. The inscrutable regulations of Algerian authorities forbid taking photos of them.

Great Baths: (left) one of the halls; (right) base of a statue to Aesculapius in the "frigidarium" (cold bath)

The Great Baths were built in 183 at the time of Emperor Commodus and they had all the facilities of a large establishment. Maybe for this reason they were usually called Baths of Caracalla, similar to those in Rome. Some of the marbles and mosaics which decorated them are still in situ, whereas the statues are at the museum. The baths are located near the top of the hill where eventually a Christian neighbourhood was developed. 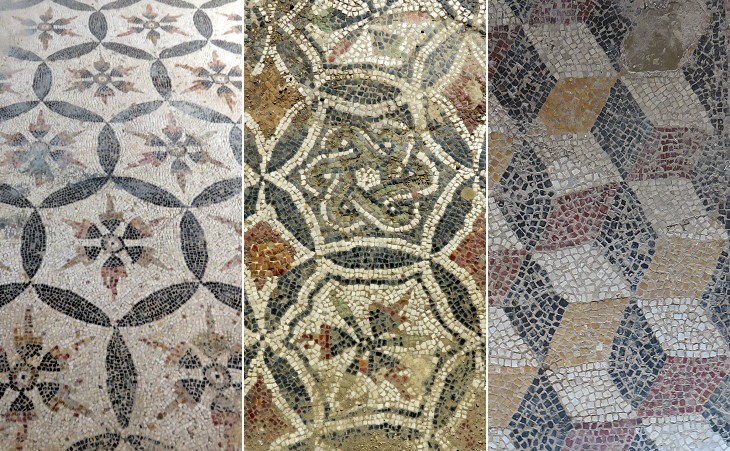 The image used as background for this page shows a detail of a mosaic from a house at the museum.

Return to the Old Town or move to the Christian Quarter and the Museum.