- Icosium (Algiers)
(detail of a mosaic at the Museum of Cherchell)

You may wish to see an introductory page to this section first. The photos of this page were taken during a short guided stroll in the Old Town. 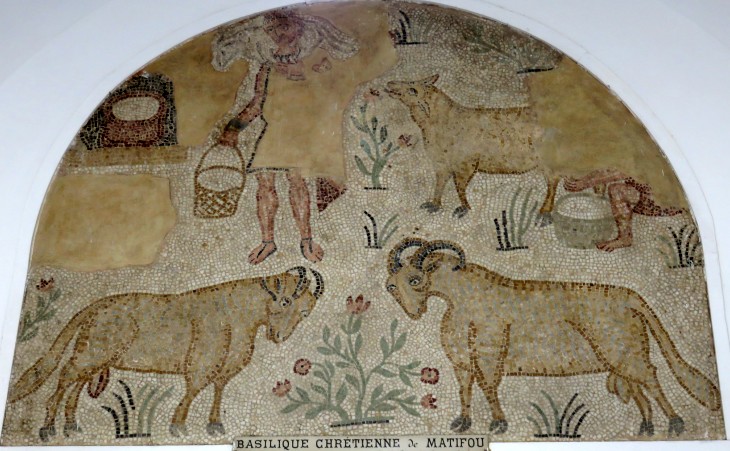 National Museum of Antiquities of Algiers: Christian mosaic found at Cape Matifou at the eastern end of the Bay of Algiers

A tiny islet opposite the coast which could provide some shelter to their ships led the Carthaginians to found a small port. Inscriptions in the Punic consonantal alphabet mention it as Yksm which then became Roman Icosium. The town is recorded as a bishopric see until the Vth century, but after the Arab invasion at the end of the VIIth century it was abandoned until it was founded again in 944 as El Djazair, the island.
A number of inscriptions, mosaics, reliefs and sections of walls concerning the Roman town have been found, but overall Algiers does not retain evidence of its ancient past. 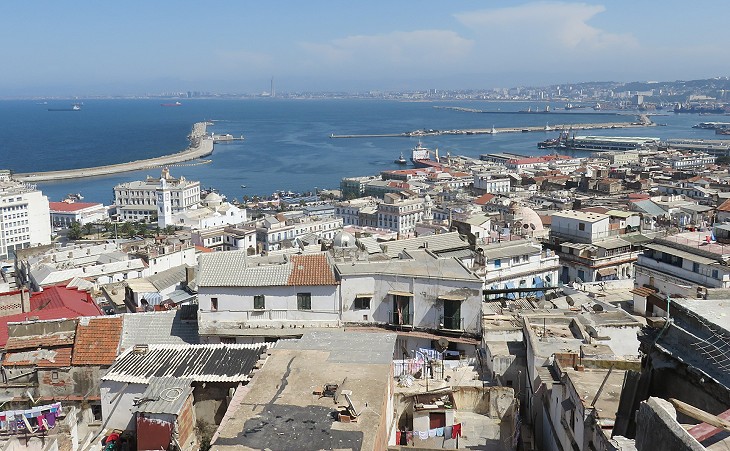 Algiers seen from a terrace in the Old Town

Al Jezeire al Gazi or Algiers The Warlike, as the Turks are pleased to call It. This Place, which for several Ages hath braved the greatest Powers of Christendom, is not above a Mile and a half in Circuit, though computed to contain about 2,000 Christian Slaves, 15,000 Jews, and 100,000 Mahometans. It is situated upon the Declivity of a Hill, that faceth the North and North-East; whereby the Houses rise so gradually above each other, that there is scarce one in the whole City hath a full View of the Sea. (..) The Hills and Valleys round about Algiers are every where beautified with Gardens and Country Seats, whither the inhabitants of better Fashion retire, during the Summer-Season. The Country Seats are little white Houses, shaded by a Variety of Fruit Trees and Ever-Greens; whereby they afford a gay and delightful Prospect towards the Sea.
Thomas Shaw - Travels, or, observations relating to several parts of Barbary and the Levant - 1738
Few cities have a more striking appearance than Algiers when approached from the sea. Situated on the western side of the bay the city is built on the steep slope of a hill, in the form of a triangle, the base of which rests on the Mediterranean; and when seen at such a distance that the eye cannot master the details, appears an immense cone of the whitest marble rising from the sea, and contrasting beautifully with the dark masses of the surrounding country.
John Clark Kennedy - Algeria and Tunisia in 1845 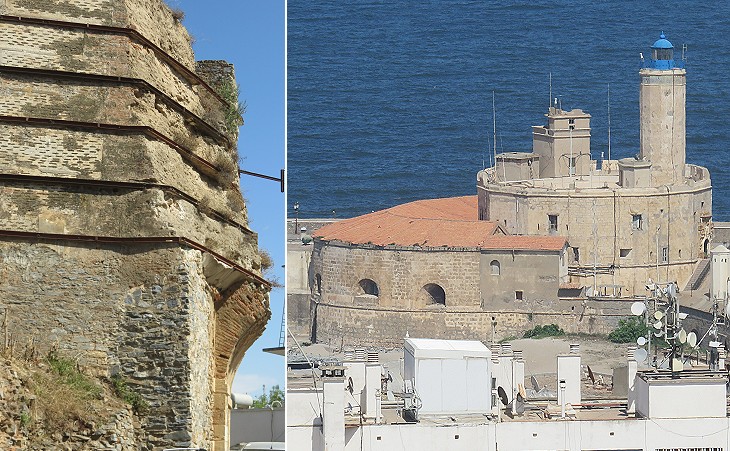 (left) Walls of the Kasbah (Citadel); the image used as background for this page shows a detail of one of its gates; (right) Sea Bastion

The city of Algiers can lay no claim to importance above any of the obscure cities of Barbary, before its conquest by (..) Barbarossa who placed his newly acquired dominions under the protection of the Grand Seignior (the Ottoman Sultan). (..) Hence the origin of the celebrated Regency of Algiers, which has been for three centuries the terror of Christendom, and the scourge of the civilized world. (..) The government of Algiers is peculiar in its fundamental character. (..) A small band of foreign adventurers seize upon the sovereign authority, and appropriate to themselves exclusively all the posts of honour, trust, or profit, under the government which they institute. Of this there are parallel cases enough; but that their institutions should deny, even to their own children born in the country, any share in the honours and emoluments of government; confining them exclusively to a corps of foreigners, constantly recruited from abroad, is truly extraordinary. Yet such is the fundamental principle of the Regency of Algiers. (..) The Turks in establishing their government in Algiers, appear to have counted upon the fruits of piracy as the main source of their revenues; and the mutual jealousies, imbecility, and interested policy of the Christian maritime world, have borne them out in their calculations; for until of late years, it has not only supplied all their wants, but through it a metallic treasury has been hoarded, that might probably sustain them for many years to come.
William Shaler, American General Consul at Algiers in 1815-1828 - Sketches of Algiers - 1825
You may wish to learn more on the fight for the control of the region between the Spaniards and Barbarossa during the XVIth century in pages dealing with Bizerte and Tunis. 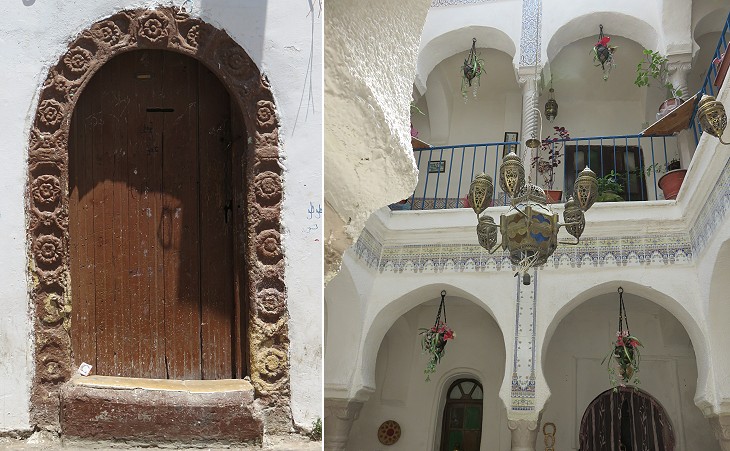 The houses in Algiers are all built upon precisely the same plan; a description of that which I inhabit, will therefore give an accurate idea of the whole, as they differ only in size, and the value of the materials of which they are constructed. This house is a square of about sixty-four feet, with a depth, or elevation, of forty-two feet, one third of which is occupied by the basement story, consisting of a range of magazines, of cisterns, of stables, and of the solid arches necessary to support the superstructure. The remaining twenty-eight feet of elevation are divided into two habitable stories, surrounding an open court paved with marble, thirty feet square, around which is a covered gallery six feet wide, taken from the above thirty feet, and supported upon each floor by twelve very elegant columns of Italian marble, of the Ionic order, which serve on each as abutments to twelve elliptical arches, and thus form round the court a double colonnade of great elegance and beauty. (..) This house is entered by only one external door, which is solid and strong as that of a fortress, so that the family inhabiting it, have every thing within themselves, without fear of intrusion. Shaler 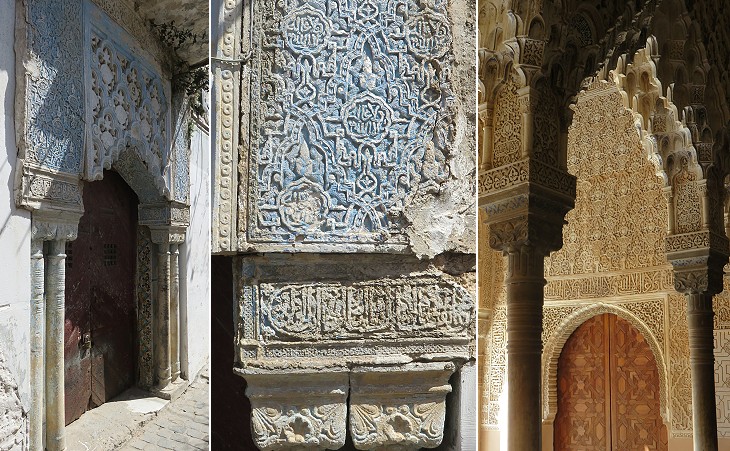 (left/centre) A portal in the Old Town which brings to mind Moorish monuments of Andalusia; (right) a detail of the Courtyard of the Lions at the Alhambra of Granada

In 1991 UNESCO included the Old Town of Algiers in their World Heritage List on the basis that: The Kasbah is a unique kind of medina, or Islamic city. It stands in one of the finest coastal sites on the Mediterranean, overlooking the islands where a Carthaginian trading-post was established in the 4th century BC. There are the remains of the citadel, old mosques and Ottoman-style palaces as well as the remains of a traditional urban structure associated with a deep-rooted sense of community. 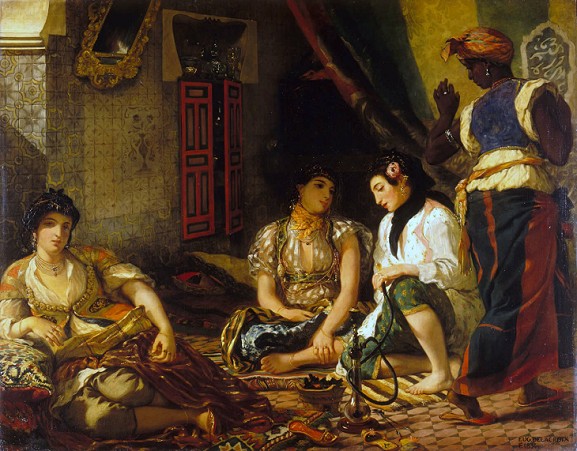 "Women of Algiers" by Eugène Delacroix (1834) - Louvre Museum in Paris

The inhabitants of Algiers are an amalgamation of the ancient Mauritanians, the various invaders subsequent to the above periods, the emigrants from Spain, and the Turks; and are now generally denominated Moors. This mixture appears to be a very happy one, for there are few people who surpass them in beauty of configuration; their features are remarkably expressive, and their complexions are hardly darker than those of the inhabitants of the south of Spain. Shaler
French troops landed near Algiers on June 14, 1830 and on July 5 the Dey (Highest Officer) of the Regency capitulated and left the country. Ottoman Sultan Mahmut II who had nominal sovereignty over the Regency did not react because his fleet had been weakened by the defeat at Navarino and in general by the effects of the Greek Independence War.
The French initiative began as a retaliation for offences made to the French consul, but it eventually led to the conquest of the whole of the Regency of Algiers, including inland territories which were ruled by local beys and tribe leaders. It was a very bloody affair with casualties in the region of 500,000. In December 1848 Algeria was formally annexed to the French Republic. 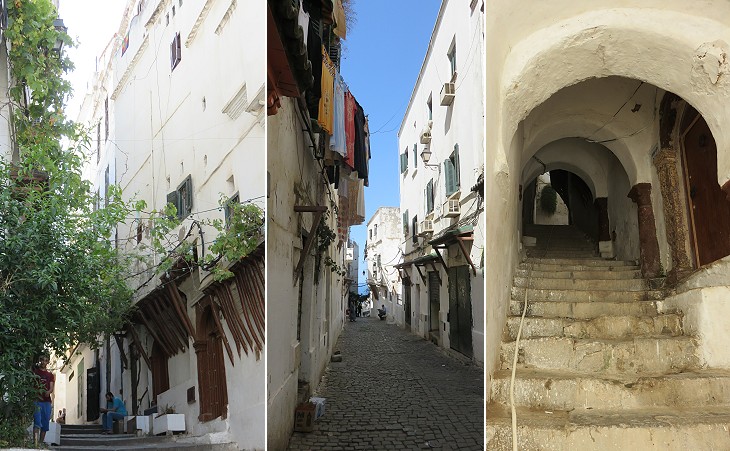 Streets in the Old Town

We ascended to the Kasbah through a labyrinth of wretched streets, inhabited by the very dregs of the population, built without the slightest attempt at regularity, winding their devious course in almost inextricable confusion, the difficulty of threading them being increased by the numerous blind alleys, and the striking likeness each house bears to its next door neighbour. Clark Kennedy
The French redesigned the layout of the area of Algiers near the harbour which was reserved to the growing European population and to private and state institutions. The description of the Old Town by Clark Kennedy, unlike those by Shaw and Shaler, shows the contempt by which officers of the colonial powers looked upon other cultures. Clark Kennedy visited Algiers after having served in the 18th Royal Irish Regiment in the First Opium War of 1840-42. 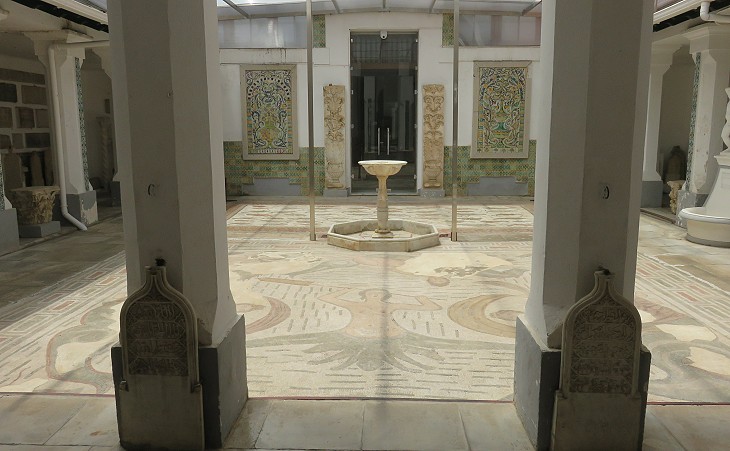 Courtyard of the National Museum of Antiquities of Algiers

The French administration was keen on emphasizing the Roman presence in Algeria and French archaeologists extensively worked at the excavation, restoration and conservation of Roman sites and monuments. In a way they promoted a cultural association between the Roman and the French rule.
In 1914 the novelist and historian Louis Bertrand observed when he visited the Roman ruins at Tipasa that he had rediscovered "the men who spoke his language and believed in his gods. He was no longer a lost Roumi in an Islamic land".
Stephen L. Dyson - In Pursuit of Ancient Past - Yale University 2006
Notwithstanding this enthusiasm for the ancient ruins a very large number of archaeological sites and monuments were sacrificed to the development of modern towns (e.g. Cherchell) and infrastructures. 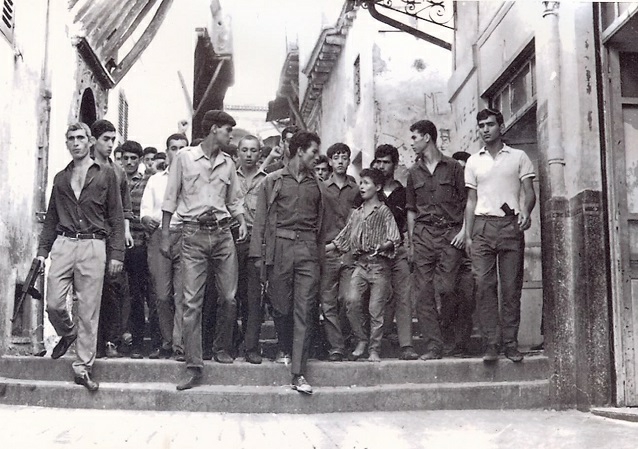 A still image from "The Battle of Algiers", a 1966 movie directed by Gillo Pontecorvo

In July 1962 Algeria was proclaimed an independent country at the end of eight years of a war without scruples. The Front de Libération Nationale, the organization which led the fight against the French became the backbone of the new nation and has since retained control of it. Without delving into details it can be said that today's Algeria is confronted with an institutional/cultural conflict between the supporters of a lay society and those of an Islamic one and with an ethnic/social conflict between the inhabitants of the big coastal cities and those of the poor eastern inland regions (Kabylia) who claim to descend from the ancient peoples of Numidia. 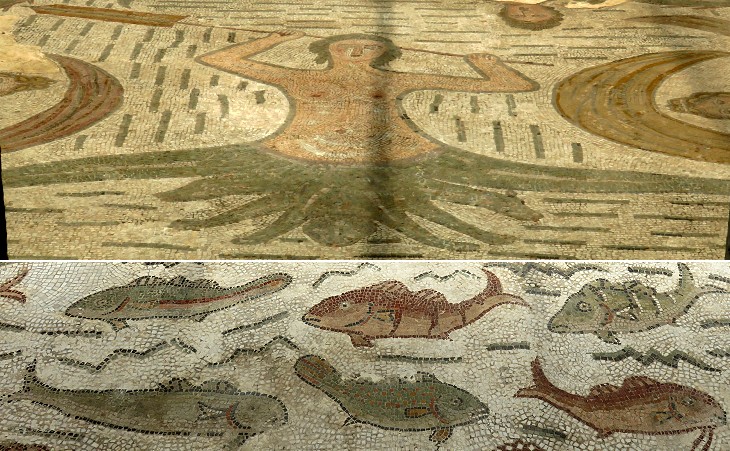 Courtyard of the National Museum of Antiquities of Algiers: (above) mosaic from Sula near Constantine depicting Scylla, a sea monster; (below) mosaic from Basilica of Bishop Alexander at Tipasa

After the independence of the country the Roman presence in Algeria was often regarded as that of a colonialist power and therefore as a negative one. A cursory visit to some archaeological sites and museums yielded mixed results: closed museums (Timgad) and abandoned sites (Lambaesis), but also well kept museums (Cherchell) and properly protected sites (Djemila).