Links to this page can be found in Book 2, Map A3, Day 1, View C9, Rione Campitelli and Rione Monti. 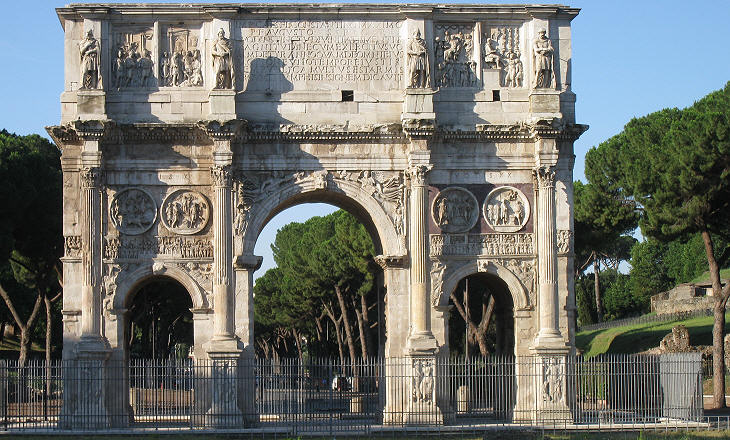 Among the triumphal arches, that of Constantine is not only the noblest of any in Rome, but in the world. I searched narrowly into it, especially among those additions of sculpture made in the emperor's own age, to see if I could find any marks of the apparition, that is said to have preceded the very victory which gave occasion to the triumphal arch. But there are not the least traces of it to be met with, which is not very strange, if we consider that the greatest part of the ornaments were taken from Trajan's arch, and set up to the new conqueror in no small haste, by the senate and people of Rome, who were then most of them Heathens. There is however something in the inscription, which is as old as the arch itself, which seems to hint at the emperor's Vision.
Joseph Addison - Remarks on several parts of Italy, in the years 1701, 1702, 1703
Arco di Costantino was most likely built for a previous emperor of the IIIrd century. It was renovated and dedicated to Emperor Constantine to celebrate his visit to Rome in 315 and his 312 victory at the Battle of Ponte Milvio against Maxentius. The inscription makes reference to Constantine's instinctu divinitatis mentis (foreknowing the will of the gods); this was viewed by early Christian historians as a confirmation of Constantine's vision of a shining cross in the sky the day before the battle. 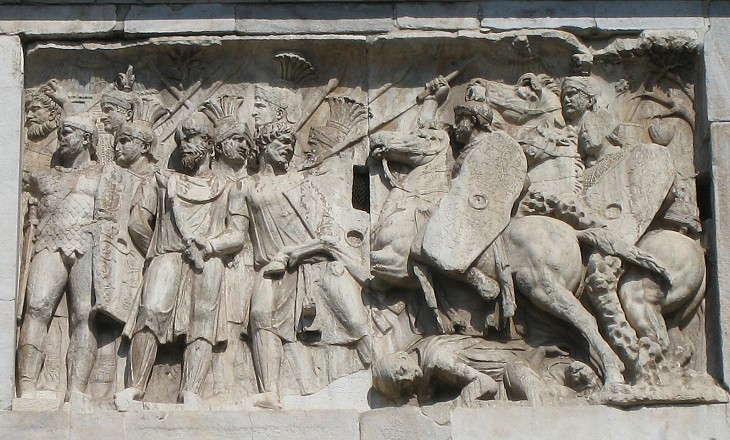 Most of the decoration of the arch comes from previous monuments to Emperors Trajan, Hadrian and Marcus Aurelius. There had been two major fires in Rome in 283 and 307 and it is possible that these monuments were badly affected by them. Four marble panels depicting scenes of the Dacian wars were taken from Basilica Ulpia. They show the same high level of workmanship as that of the reliefs of Colonna Traiana and of Arco di Traiano at Benevento. 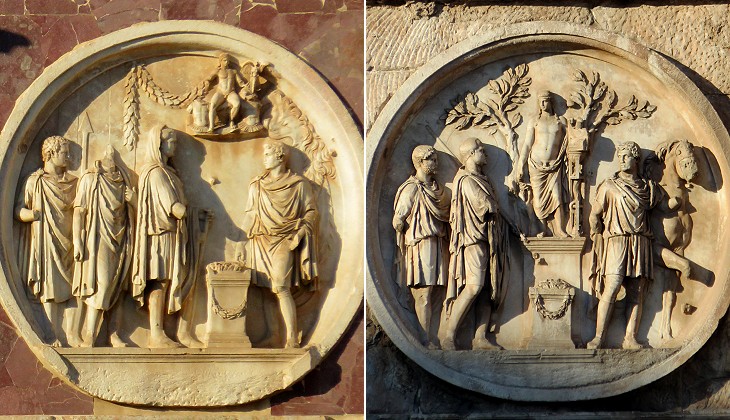 Reliefs on the northern side of the arch (from a monument to Emperor Hadrian): (left) a sacrifice to Hercules; the young man on the left is perhaps Antinous, the favourite of the Emperor, who was known for his curly hair; (right) a sacrifice to Apollo; the man on the left is perhaps the Emperor, although one would expect him to be portrayed nearer the statue of Apollo

The fame of Trajan is associated with his military successes, that of Hadrian with a long period of peace; the eight round reliefs which were taken from a (lost) arch to that emperor, depict scenes of hunting and of sacrifices; in some of them the head of Hadrian was modified in order to portray Constantine or Licinius, his associate in power (Hadrian had a light beard, Constantine and Licinius were clean-shaven). (left) Reliefs on the northern side of the arch (from a monument celebrating Emperor Marcus Aurelius): a) the emperor distributes money to the poor; b) surrender of an enemy (see a similar relief on Colonna Antonina); (far right) Musei Capitolini: broken statue of a Dacian prisoner which stood on the arch. It was replaced by a copy by Pietro Bracci who in 1732 restored the other seven statues

Eight rectangular reliefs came from a (lost) arch to Emperor Marcus Aurelius built by his son Commodus. It was situated near SS. Luca e Martina where three other reliefs were found in 1515. In the reliefs on the arch the head of the emperor was modified because Marcus Aurelius had curly hair and an elaborate beard.
The eight statues of Dacian prisoners at the sides of these reliefs came from Foro di Traiano. 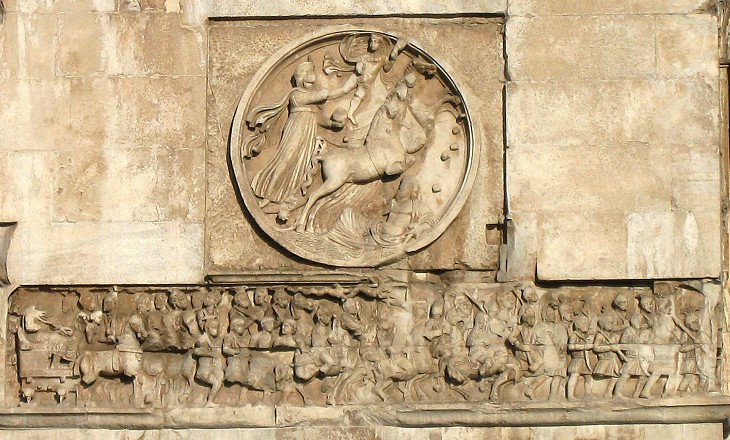 The decoration of the arch was completed with reliefs made for the occasion and portraying events of the 312 campaign against Maxentius (two reliefs can be seen in the historical section of this website). Their quality is much lower than that of the reliefs taken from other monuments; it is interesting to observe that two round reliefs were dedicated to the Sun and the Moon; these were not very common themes for the decoration of a Roman monument celebrating an emperor, but Constantine was a devotee of Sol Invictus (Invincible Sun), a belief which was very popular among his soldiers too. 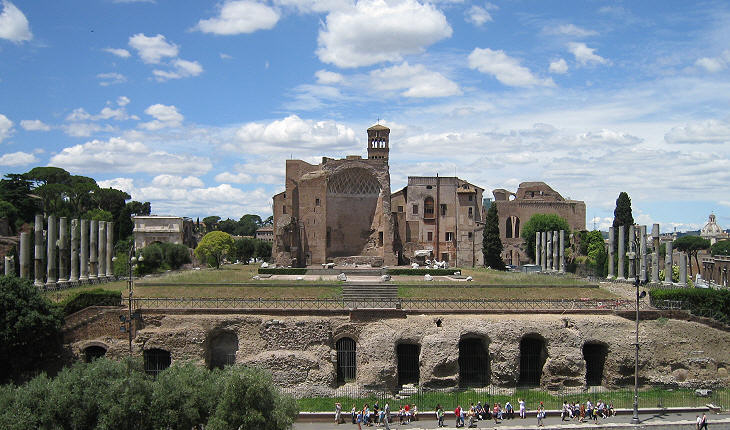 Vasi showed the eastern apse of Tempio di Venere e Roma near the right margin of the plate. The temple was built by Emperor Hadrian who was personally involved in its design. It was made up of two identical back-to-back buildings facing the Roman Forum and Colosseo. The dedication to Venus of one of the two temples was due to the role of the goddess in the history of Rome. She was the mother of Aeneas, whose descendants founded the city. Another temple to Venus stood in Foro di Cesare.
The two temples were placed on a large artificial terrace (it measures 100x145 metres / 109x159 yds) and they were surrounded by more than a hundred grey granite columns.

Apse of the temple dedicated to Venus and bell tower of S. Francesca Romana

The statue of the deity was placed in a gigantic niche, the decoration of which inspired many artists (see Francesco Salvi's niche in Fontana di Trevi and the portico of Palazzo Massimi). The niche on the other side of the wall is hidden by S. Francesca Romana, a church which was built on the western terrace of the temple. 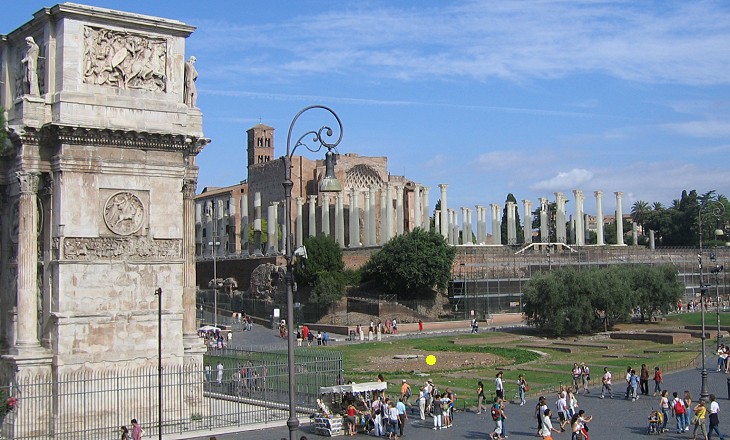 The site of Meta Sudante (yellow dot); the fiberglass columns on the terrace of Tempio di Venere e Roma were erected for a special event

The plate shows the ruin of Meta Sudante, a Roman fountain, in front of Arco di Costantino. In 1936 it was still there (you may wish to see it in an old photo - it opens in another window), but it was pulled down to allow military parades to go through the arch. The fountain had a conical shape which resembled that of metae, conical poles at turning points of a Roman circus (see a small example at Cuicul in Algeria). It was built by Emperor Domitian. It was not a spouting fountain, but a "sweating" one (It. sudante): water slid on its surface. In the XVIth century Pirro Ligorio designed two sweating fountains at Villa d'Este. 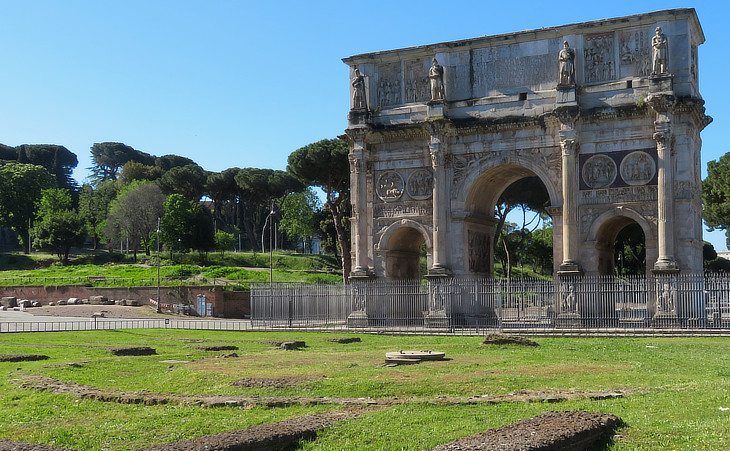 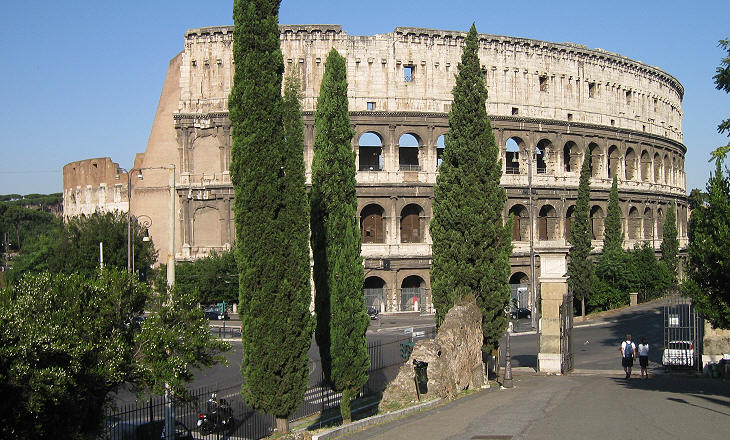 The site of Domus Aurea

After one of the most damaging fires (64 AD) ever occurred in Rome, Emperor Nero redesigned some parts of the Imperial Palace on the Palatine Hill. The Emperor was suspected of having set fire to Rome to enlarge his residence, which actually he expanded by including parts of the Esquiline and Caelian hills in it. This vast area became a large villa, with small woods, fountains, gardens and a pond at its centre. Nero built a large pavilion overlooking the pond on the first slopes of the Esquiline; it was known as Domus Aurea (Golden House) and it was damaged by fire in 104.
In 111 Apollodorus of Damascus, the architect of Foro di Traiano, filled Domus Aurea with earth from the excavation of Velia, a hill which he levelled to the ground to make room for the forum. Apollodorus reinforced the walls of the pavilion and used them as foundations for the baths he built for Emperor Trajan.
Domus Aurea was discovered and "excavated" in the early XVIth century. The site was visited by many artists, including Pinturicchio, Raphael and Michelangelo, who found inspiration in the decoration of its halls (grotesque after Italian grotta, because these underground large spaces resembled caves). You may wish to see the grotesque decoration of Palazzo Farnese di Caprarola. 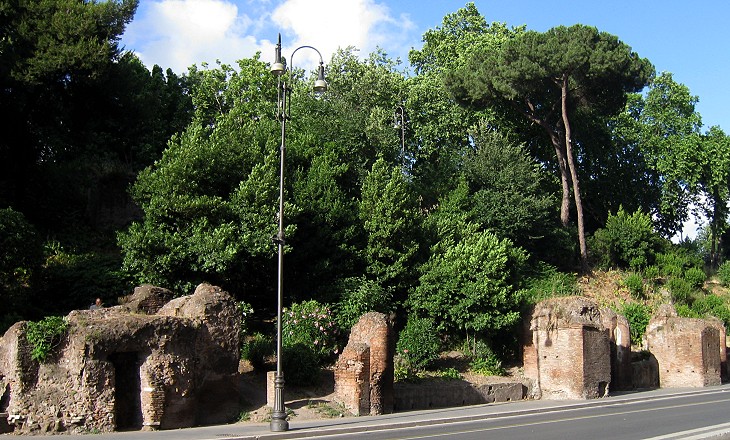 Emperor Vespasian came to power one year after Nero was forced to commit suicide; in order to gain the favour of the Senate and popular support he built Colosseo on the site of the pond; so what was meant to give pleasure to the sole emperor, became the venue devoted to the entertainment of the Romans.
The baths of Nero's villa were slightly modified and were opened to the public by Emperor Titus, his son. Their remains stand opposite the northern side of Colosseo. 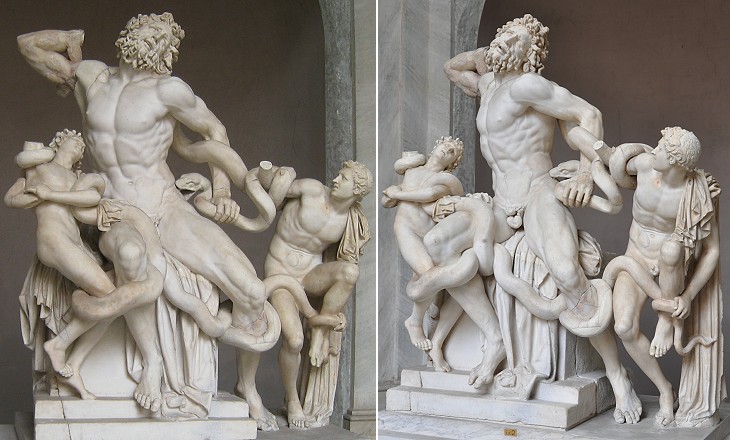 Museo Pio-Clementino: Laocoon and his two sons. The group was found in 1506 near Domus Aurea, but it most likely decorated the baths of Titus (see an ancient head of Ulysses which was found at Sperlonga and a XVIIth century head which both resemble that of Laocoön)

Laocoön, in the palace of the Emperor Titus, is a work that may be looked upon as preferable to any other production of the art of painting or of statuary. It is sculptured from a single block, both the main figure as well as the children, and the serpents with their marvellous folds.
Pliny the Elder - Historia Naturalis - Book 34 - Translation by John Bostock and Henry Thomas Riley.
Though the statues that have been found among the ruins of old Rome are already very numerous, there is no question but posterity will have the pleasure of seeing many noble pieces of sculpture which are still undiscovered, for, doubtless, there are greater treasures of this nature under ground than what are yet brought to light. They have often dug into lands that are described in old authors, as the places where such particular statues and obelisks stood, and have seldom failed of success in their pursuits. There are still many such promising spots of ground that have never been searched into. (..) I was shown two spaces of ground, where part of Nero's Golden House stood, for which the owner has been offered an extraordinary sum of money. What encouraged the undertakers, are several very ancient trees which grow upon the spot, from whence they conclude that these particular tracts of ground must have lain untouched for some ages. Addison 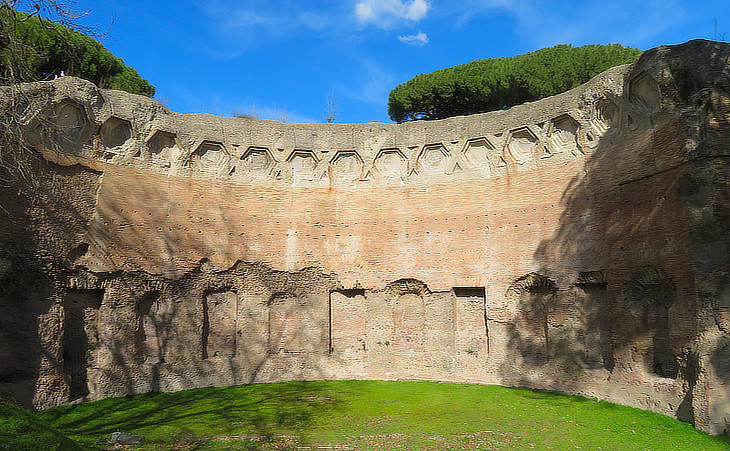 Walls of halls in the main building

The baths designed by Apollodorus for Emperor Trajan set a pattern which was followed for the construction of Caracalla's and Diocletian's baths and for many other similar complexes throughout the empire (e.g. those of Carthage and Leptis Magna); they included other facilities (e.g. libraries and areas for physical exercise) in addition to the baths; they were all placed inside a walled garden. 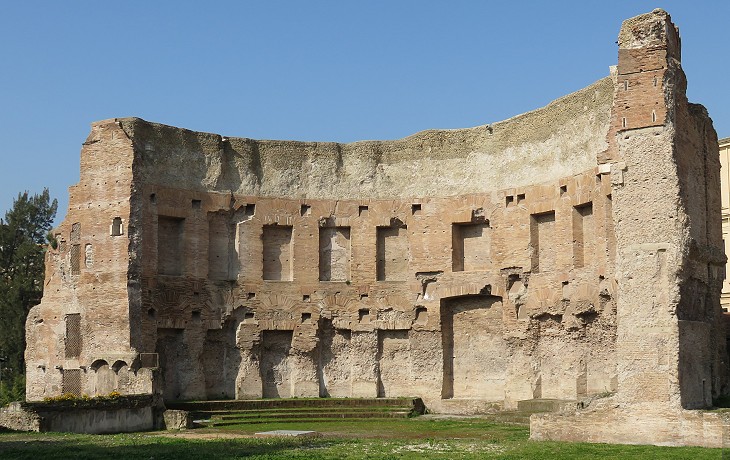 On November 18, 1786. With the varieties of stone, of which all the great edifices, whether old or new are built, Tischbein has made himself perfectly acquainted; he has thoroughly studied them, and his studies have been greatly helped by his artistic eye, and the artist's pleasure in sensible things. (..) There are opportunities enough here for my collecting many more specimens. In our way to the ruins of Nero's palace (Terme di Traiano), we passed through some artichoke grounds newly turned up, and we could not resist the temptation to cram our pockets full of the granite, porphyry, and marble slabs which lie here by thousands, and serve as unfailing witnesses to the ancient splendour of the walls which were once covered with them.
J. W. Goethe - Italian Journey - Translation by Charles Nisbeth
The walls of this and other buildings of the baths were faced with marbles. 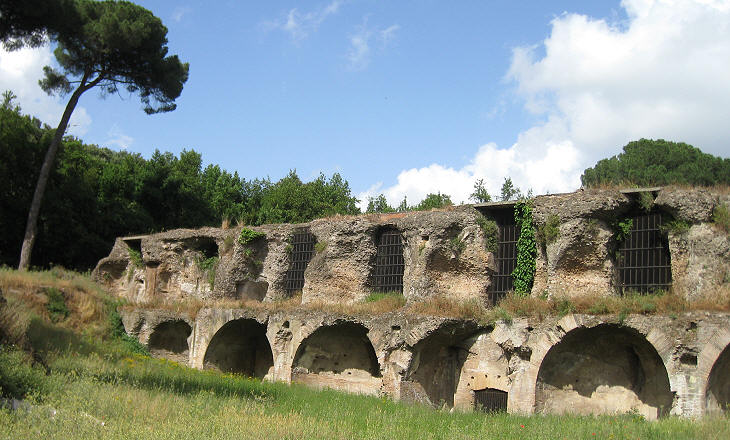 A series of ten cisterns provided a constant and controlled supply of water; of these cisterns seven were never covered by vegetation or other buildings. They attracted the attention of Giovanni Battista Piranesi; you may wish to see his etching showing their interior (it opens in another window).