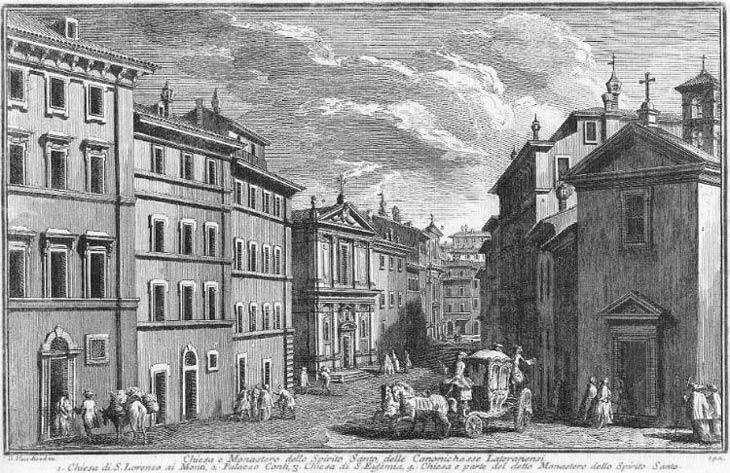 In 1759 Giuseppe Vasi published his eighth book of etchings depicting the monuments of Rome. It covered the nunneries and most likely it did not sell well. Apart from the views of a couple of historical churches (e.g. S. Cecilia and S. Susanna) it could hardly interest the traveller who wanted to bring home some mementoes of his Roman stay.
Today some of these less interesting plates have acquired a value they did not have, because they are the only ones to show views of Roma Sparita (Lost Rome). This term is used to refer to the parts of the city which were pulled down to open or enlarge streets or to excavate ancient monuments between the 1870s and the 1930s.
The view is taken from the green dot in the 1748 map below. In the description below the plate Vasi made reference to: 1) S. Lorenzo ai Monti; 2) Palazzo Conti; 3) S. Eufemia; 4) Spirito Santo. The map shows also 5) Mercati di Traiano (and Colonna Traiana in the left upper corner). 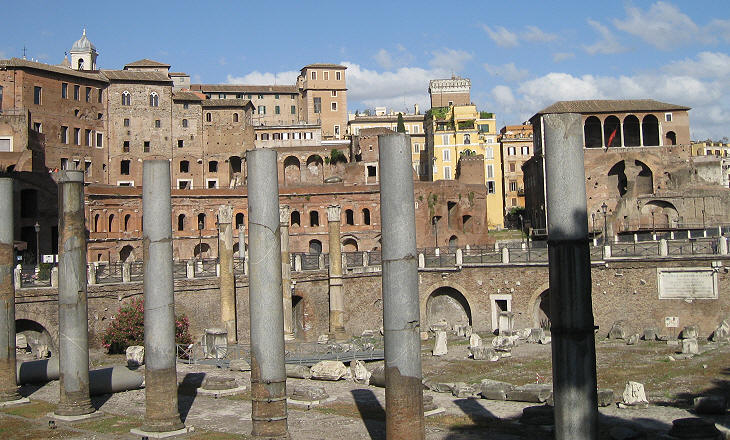 Vasi would hardly believe that the photo above was taken from roughly the same point he used for his view. The buildings on the left side of the plate (including S. Eufemia and Spirito Santo) were demolished in 1812 during the first modern archaeological excavations of Rome. In the 1930s S. Lorenzo ai Monti and Palazzo Conti were pulled down to open Via dei Fori Imperiali. In general the lost churches did not have a significant artistic value. Their movable works of art were relocated to other nunneries/churches. 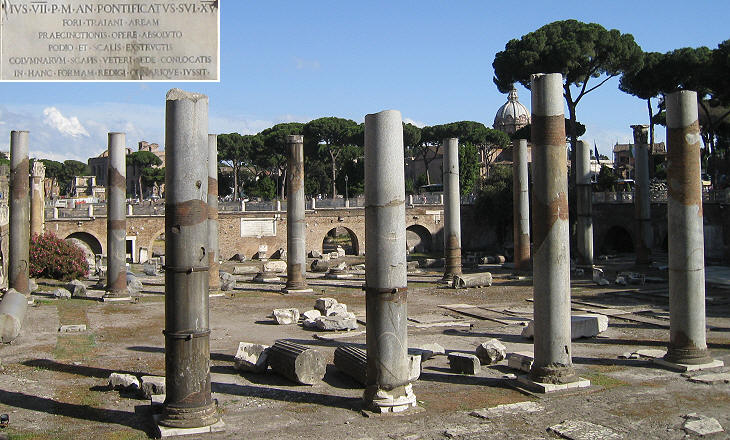 (Trajan's Pillar) stands in a Small Square and the Ground all about having been Rais'd as Usual in Length Of Time, and Clear'd away at the Bottom, it stands in a Hole. (..) This Hole is so Deep that at some Distance the Pillar seems to be without any Pedestal.
Jonathan and Jonathan Richardson - Account of Some of the Statues, etc. in Italy - 1722
The late excavation enables us at last to tread the floor of ancient Rome. The replacing the fragments of the columns on their bases, and the judicious arrangement of the other marbles, has created an effect little inferior to the wonders of Pompej.
John Cam Hobhouse - Dissertations on the Ruins of Rome - 1818
Colonna Traiana was for centuries the only visible evidence of the Forum built by Emperor Marcus Ulpius Traianus in 108-113 AD. The excavations initiated by the French in 1812 and completed by Pope Pius VII unearthed the site and some of the granite columns of Basilica Ulpia, the main building of the Forum. 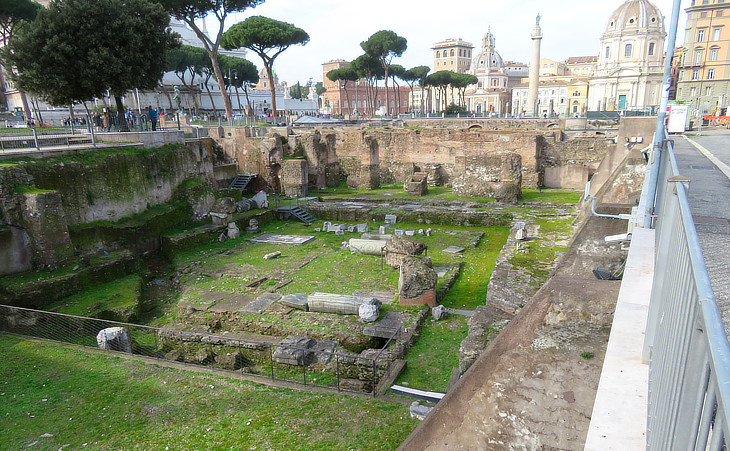 Excavations carried out in 1998-2000 have allowed a better understanding of the layout and overall size of the Forum. Its eastern entrance was a court with marble porticoes on three sides. It gave access, probably through a sort of triumphal arch, to a very large square having an equestrian statue of Trajan at its centre and two porticoes on its southern and northern sides. 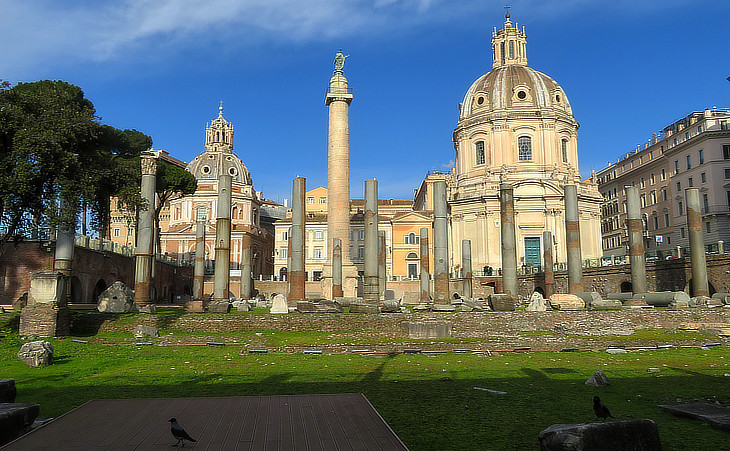 Basilica Ulpia and Colonna Traiana seen from the easternmost point of the 1815 excavations with S. Maria di Loreto (left) and SS. Nome di Maria (right) in the background

Colonna Traiana did not stand in the centre of the square, but in a small court behind Basilica Ulpia with two tall buildings (libraries) at its side from which the reliefs of the column could be admired at close range. The complex was still impressive in the IVth century: Constantius (..) became desirous of visiting Rome, with the intention of celebrating his triumph over Magnentius. (..) When he came to the forum of Trajan, the most exquisite structure, in my opinion, under the canopy of heaven, and admired even by the deities themselves, he stood transfixed with wonder, casting his mind over the gigantic proportions of the place, beyond the power of mortal to describe, and beyond the reasonable desire of mortals to rival.
Ammianus Marcellinus - Roman History - Book XVI - translation by C. D. Yonge 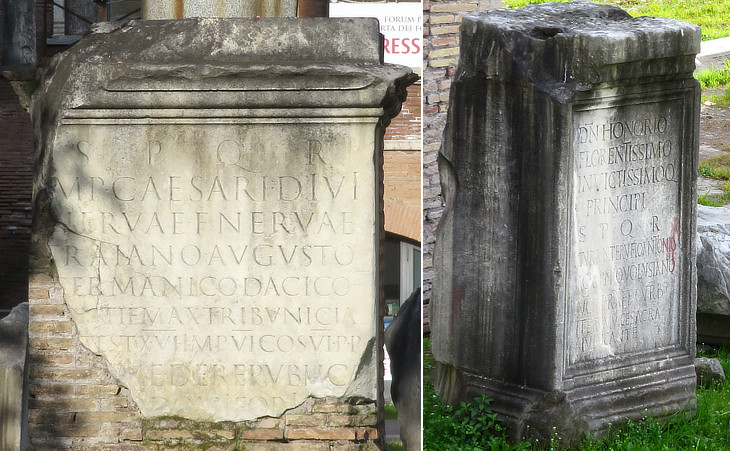 The Forum of Trajan served amongst other purposes to perpetuate the memory of the good and great. (..) We know that Marcus Aurelius erected statues in this Forum to all those who fell in the German war and that Alexander Severus transferred thither those of other celebrated personages from other sites. (..) The same place was devoted to the labours and the rewards of literary heroes; here the poets and others recited their compositions perhaps in the Ulpian library (..) and here their images were allowed a place amongst conquerors and monarchs. (..) Fragments of statues and pedestals were dug up in the great excavation, but only five inscriptions, of which four were copies of each other and in honour of Trajan, were discovered. Hobhouse
In a strange twist of fate the Forum today houses an inscription celebrating the emperor under whom the power of the Empire reached its apex and another one celebrating the emperor who most contributed to its decline, notwithstanding the flattering titles (florentissimo - very prosperous; invictissimo - never defeated). 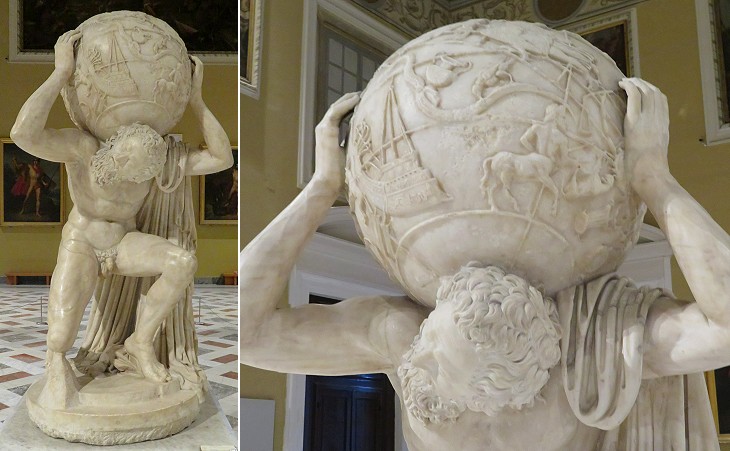 Archaeological Museum of Naples - Farnese Collection: Atlas holding the celestial spheres which most likely embellished one of the libraries, before being moved to Terme di Caracalla where it was found in 1546

The Forum was designed by Apollodorus of Damascus, a military engineer, who levelled Velia, a hill between the Quirinal and the Capitol, to the ground to make room for the Forum. He was the favourite architect of the Emperor for whom he designed new baths in Rome, triumphal arches at Ancona and Benevento, improvements to Via Appia at Terracina and a stone bridge on the River Danube.
In ca 315 some statues and reliefs were removed from the Forum to embellish Arco di Costantino. 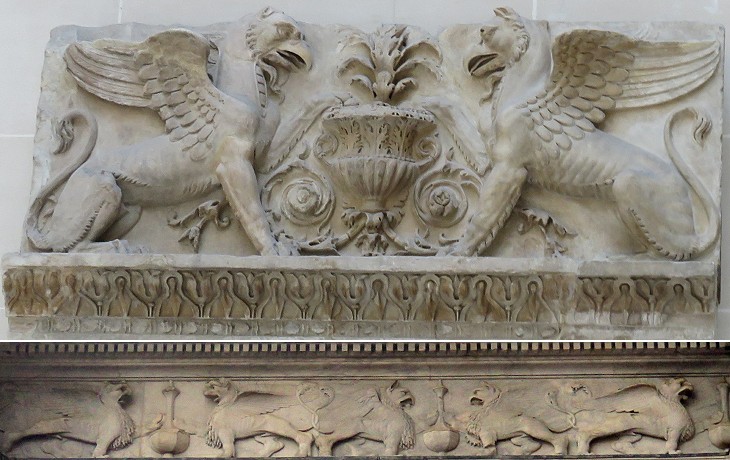 (above) Louvre Museum in Paris (from the Borghese Collection): frieze from Basilica Ulpia (a similar relief at Mercati di Traiano is shown in the image used as background for this page); (below) frieze by Antonio Federighi at Cappella di Piazza in Siena (late XVth century)

The griffin is a mythological creature part eagle part lion. It was regarded as a guardian of treasures and it was associated with Apollo. The Great Temple to that god at Didyma was decorated with a frieze similar to that at Basilica Ulpia. The same motif was utilized in 141 for Tempio di Antonino e Faustina. Because that temple did not fall and the frieze was very visible it was copied by many Renaissance artists who eventually used it in their works, e.g. at Palazzo Simonetti. 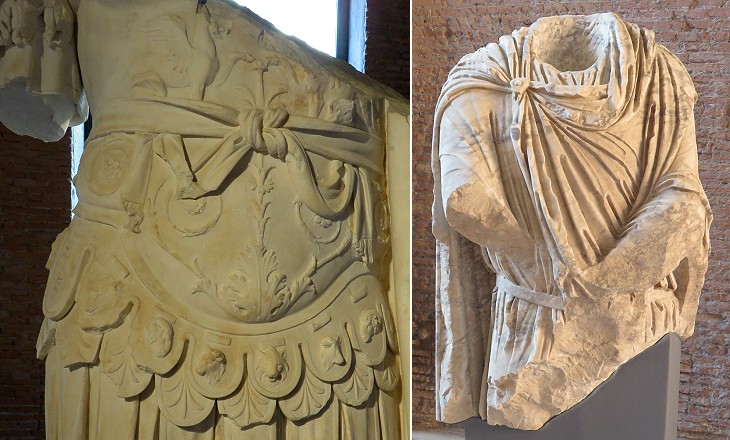 Exhibits at Mercati di Traiano from Basilica Ulpia: (left) statue of a Roman general, most likely Emperor Trajan, with the same griffin decoration as in the frieze (see a very similar statue in the Museum of Pergamum - it opens in another window); (right) one of a large number of statues portraying Dacian prisoners (see those at Arco di Costantino and in Florence) 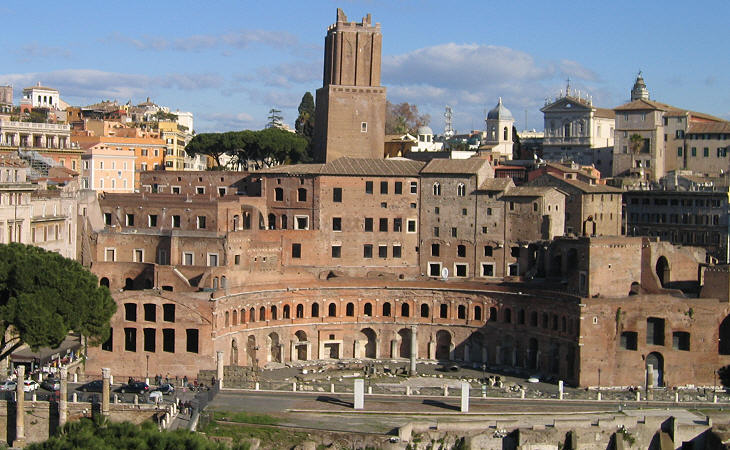 The Forum was adjoined by a semicircular square surrounded by a series of shops (see a page which covers Mercati di Traiano in detail).