Spedale di S. Giovanni in Laterano
(Vasi at work in the Grand View of Rome)

The page covers:
The plate by Giuseppe Vasi
Today's view
The Hospital
SS. Andrea e Bartolomeo
The Fountain of the Three Popes 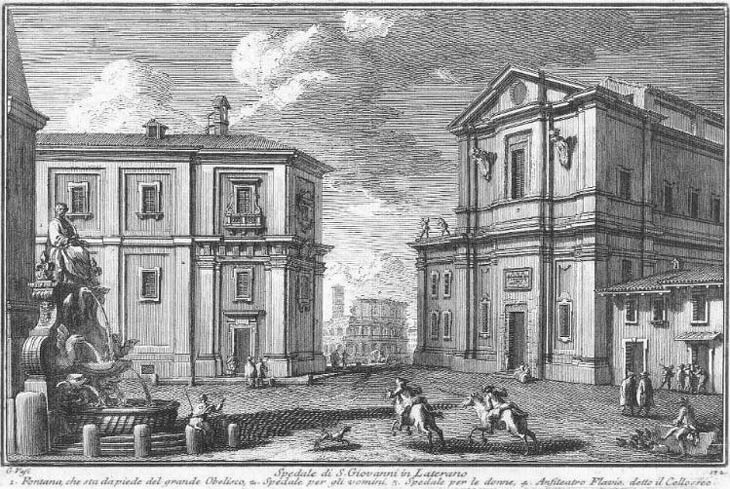 Vasi names the hospital after S. Giovanni in Laterano, the basilica which stands opposite it; a more appropriate name to design this institution is Ospedale del Salvatore (Saviour), because it was founded by a brotherhood which was responsible for the custody of a sacred image of Jesus (the basilica was dedicated also to the Saviour). This image was regarded as acheiropoieta, i.e. not made by a human painter. It is kept at Cappella del Sancta Santorum alla Scala Santa. This explains why so many reliefs portraying the head of Jesus decorate the hospital.
The view shows the straight street linking S. Giovanni in Laterano with Colosseo which was opened by Pope Sixtus V. The Pope wanted it to directly reach S. Pietro and he ordered Domenico Fontana to pull down the ancient amphitheatre, but Cardinal Giulio Antonio Santorio and others succeeded in persuading him to spare it.
The view is taken from the green dot in the 1748 map below. In the description below the plate Vasi made reference to: 1) Fountain near the Obelisk; 2) Hospital (Men's Ward); 3) Hospital (Women's Ward); 4) Anfiteatro Flavio (Colosseo). 4) is shown in another page. The small map shows also 5) SS. Andrea e Bartolomeo. 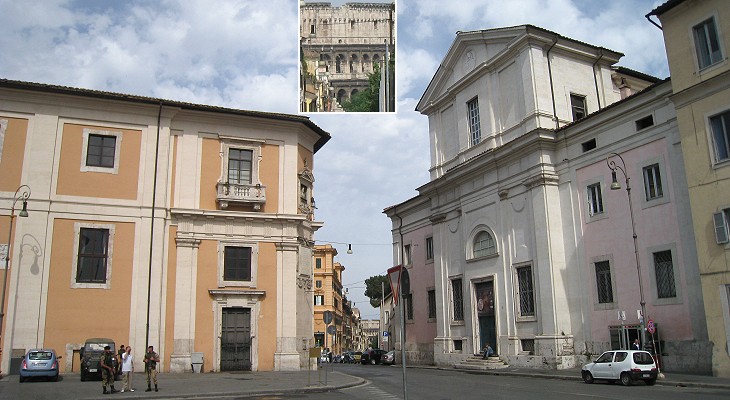 Overall very little has changed and one can still see Colosseo at the end of the long street (Vasi showed the bell tower of S. Francesca Romana behind the amphitheatre, but I doubt he could actually see it). The Women's Ward was not yet completed at the time Vasi made the etching (it did not have the small right wing). The hospital was founded in 1348 and it was dedicated to St. Michael. We know that it replaced a prior hospital which was near SS. Pietro e Marcellino and which was the residence of St. Francis of Assisi when he came to Rome to meet Pope Innocent III.
In the XVth century the hospital was enlarged and it was renamed Ospedale del Salvatore. It was meant to provide help not only to the sick, but also to the poor "REFUGIUM PAUPER.(UM) ET INFIRMOR(UM)". The new portal is surrounded by a very small inscription coming from the old one with the names of the founders and the year 1348. The relief at its centre (the Lamb of God) is shown in the image used as background for this page. 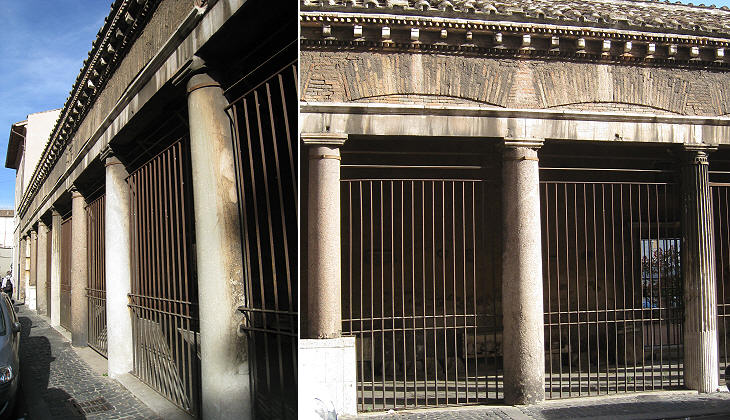 The XIVth century hospital was preceded by a portico which was built using eight ancient columns of different stones. It stands at the beginning of the street leading to S. Stefano Rotondo which was at that time the main street between S. Giovanni in Laterano and the rest of the city. 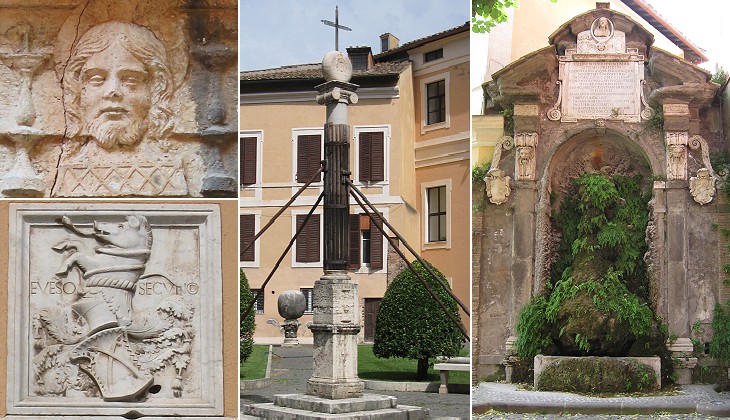 (left-above) Sacred image (XVth century); (left-below) coat of arms of Everso II, Conte di Anguillara, who made a donation in 1460 for the enlargement of the hospital; (centre) column erected during the pontificate of Pope Leo X; (right) 1593 fountain celebrating a link to the Acqua Felice aqueduct made by Pope Clement VIII

The hospital was rather remote from the centre of the city yet we know that during the XVIth century its facilities were improved. According to a 1592 chronicle it could accommodate 100 poor men, 80 poor women and 50 paying patients. The external appearance of the complex however did not fit with that of nearby Piazza di S. Giovanni in Laterano which Pope Sixtus V had greatly embellished.

I looked also into the fair Hospital which stands hard by the foresaid Church, and so well served and tended, that many persons of quality in their Sickness desire to be transferred hither, that they may be better looked to, than they can be at home.
Richard Lassels' The Voyage of Italy, or a Compleat Journey through Italy in ca 1668
The new Men's Ward was designed by Giacomo Mola in 1630-1636 at the request of Pope Urban VIII. It was a very long building in order to completely fill the western side of the piazza (this is best seen in another plate by Vasi). 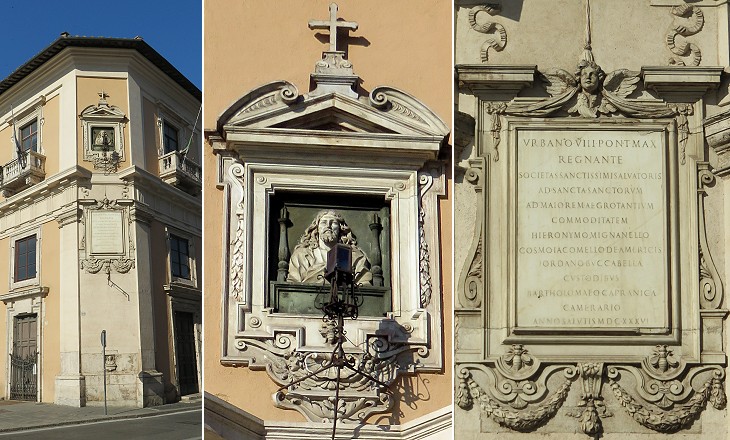 Men's Ward: sacred image and 1636 inscription celebrating the completion of the building

The Men's Ward had two side entrances in addition to those on the main façade. On the Feast of Corpus Domini a major procession from S. Giovanni in Laterano to S. Maria Maggiore, which was led by the Pope, entered the Men's Ward through one side entrance and exited it from the other. The practice was discontinued in 1867 on hygienic grounds. 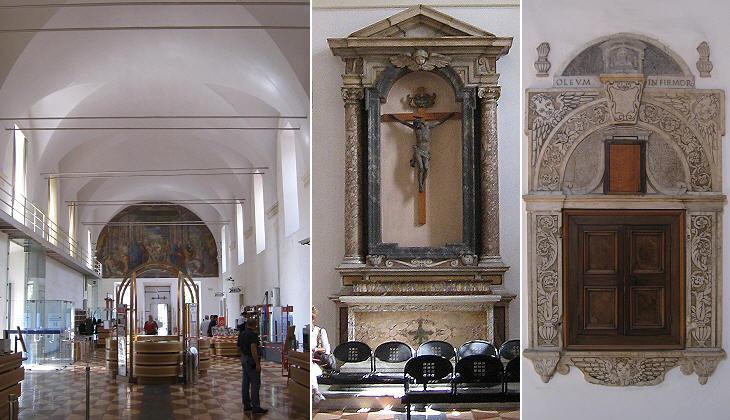 Men's Ward: (left) interior; (centre) crucifix; (right) cupboard for the Holy Oil which was used for the Extreme Unction (or Anointing of the Sick)

In the XXth century a modern hospital was built behind the old one: the Men's Ward (after a long period of abandonment) is today a hall for receiving the public. 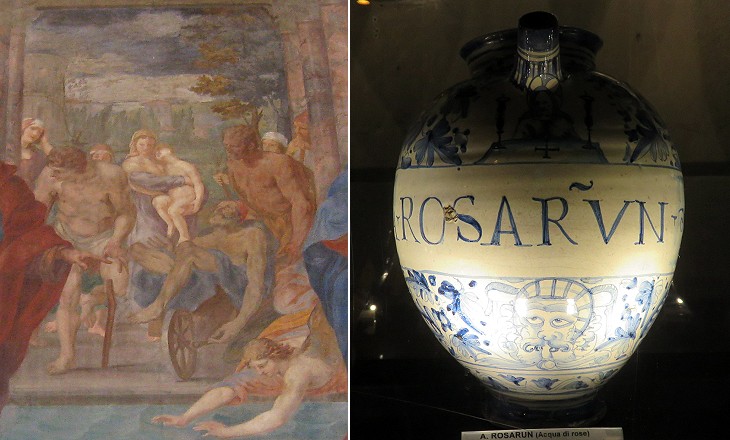 (left) Detail of the fresco known as "Piscina Probatica" by Giovanni Battista Ruggeri in the Men's Ward; (right) medicinal jar of the pharmacy (Collezione Cremonini). In the upper part it is decorated with the symbol of the hospital. It contained rose water which was used to lower fever by soaking a cloth with it and placing it on the forehead of the patient

A large fresco reminded the patients of a miracle by Jesus:
Now in Jerusalem by the Sheep (Lion) Gate there is a pool, called in Hebrew Beth-zatha, which has five porticoes. In these lay many invalids - blind, lame, and paralyzed. One man was there who had been ill for thirty-eight years. When Jesus saw him lying there and knew that he had been there a long time, he said to him, "Do you want to be made well?" The sick man answered him, "Sir, I have no one to put me into the pool when the water is stirred up; and while I am making my way, someone else steps down ahead of me." Jesus said to him, "Stand up, take your mat and walk." At once the man was made well, and he took up his mat and began to walk.
John 5:1-18 New Revised Standard Version 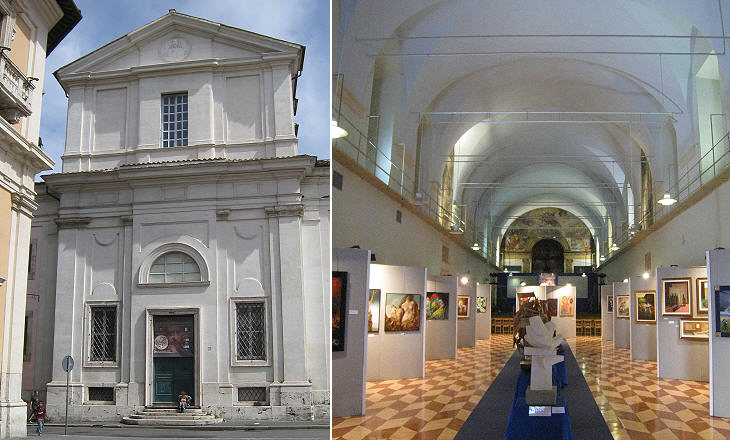 A ward reserved to women was built by Giovanni Antonio De Rossi in 1655-1666, but it was not entirely completed until the end of the following century; the large coats of arms one can see in Vasi's plate belonged to the reigning pope (Pope Alexander VII) and to the City of Rome, but they have been removed. Today this ward is used as an exhibition hall. 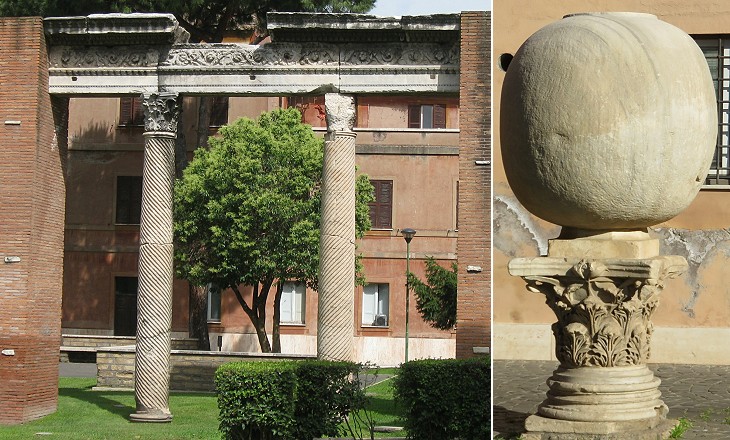 Many architectural elements of a Roman house of the IInd century AD were found in the area where the modern hospital was built. Some of them can be seen in the garden of the complex during the hours when relatives of the patients are admitted. 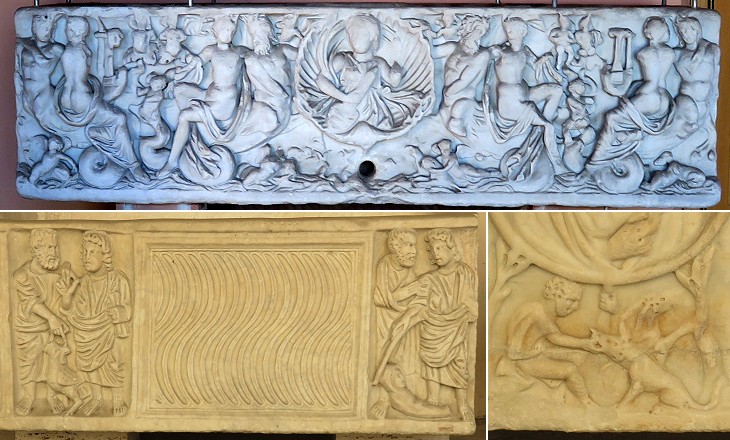 Sarcophagi found on the site of the modern hospital: (above) IInd century AD sarcophagus with a traditional subject (a "sea thiasos", a Dionysiac procession in which tritons and sea nymphs replace satyrs and maenads; see a similar one at Musei Capitolini); (below) an early Christian sarcophagus and a detail of a similar one 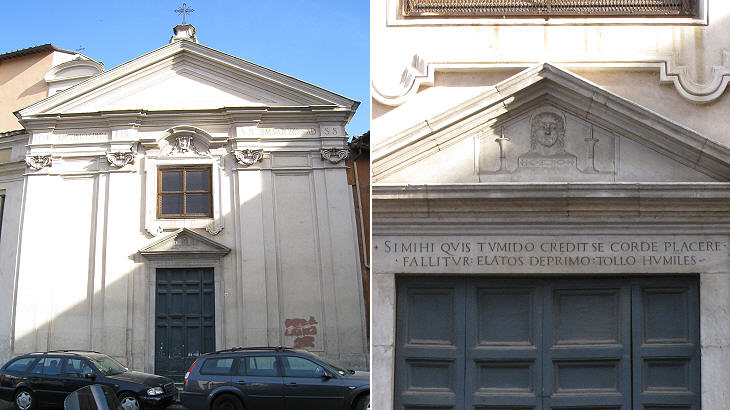 Giacomo Mola, who designed the Men's Ward, provided it with a small church which incorporated the portal of a previous church which existed on the same site. The façade was modified in the following century. The inscription means: If you believed that because you have a proud heart I consider you more, you would be wrong: I lower the high (ones), I raise the humble. The sentence is based upon Peter I - 5:6 Humble yourselves, therefore, under God's mighty hand, that he may lift you up in due time. New International Version

Fountain of the Three Popes 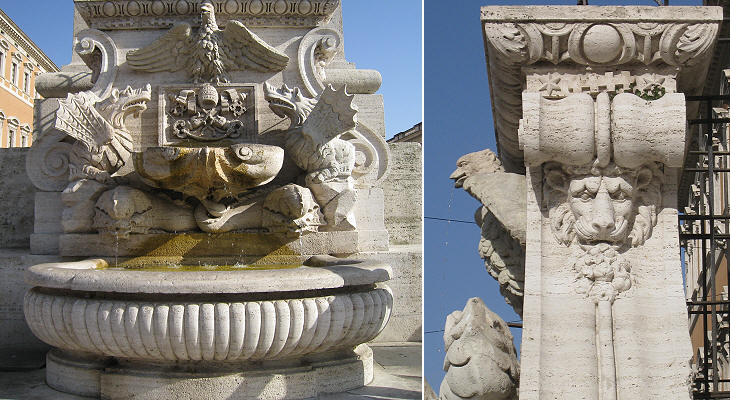 (left) Fountain of the Three Popes (the name is mine!); (right) detail showing the heraldic symbols of Pope Clement VIII (stars and stripes) and of Pope Sixtus V (lion and pears)

At first sight the fountain resembles other fountains built by Pope Paul V Borghese, but his heraldic symbols (dragons and eagles) seem to having been "pasted" to the structure of the fountain. An inspection to its back shows that the construction of the fountain was started during the pontificate of Pope Sixtus V as the lion holding the pears indicates. A few years later Pope Clement VIII modified the fountain and left his mark on the decoration above the lion. Finally in 1607 Pope Paul V added an eagle and two dragons. A small statue of St. John the Evangelist was placed on top of the fountain probably by Pope Innocent X (the fleurs-de-lis at the side of the statue which are shown by Vasi were one of his heraldic symbols), but it was lost in the XIXth century. The obelisk which stands behind the fountain is shown in another page.