Links to this page can be found in Book 3. 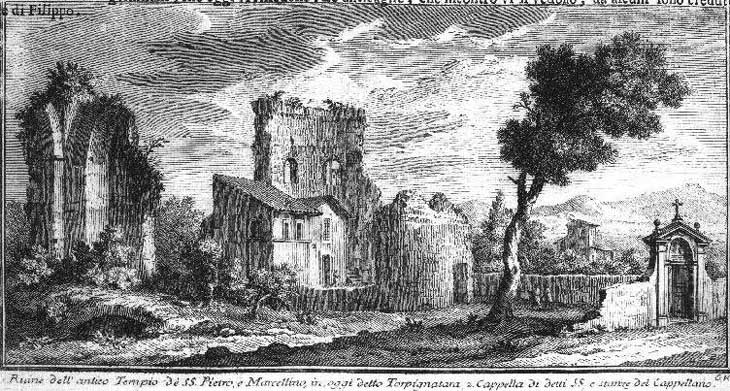 Giuseppe Vasi included a small etching showing a chapel built in 1638 by Pope Urban VIII in his 1753 book of views of the main basilicas of Rome; the chapel was built on the site where Sts. Peter and Marcellinus, two martyrs of the early IVth century, were beheaded and it was located three miles off Porta Maggiore along ancient Via Labicana (now Casilina), while a large church (shown by Vasi in the previous plate) was dedicated to them in Rome.
The chapel was surrounded by the imposing ruin of the Mausoleum of St. Helena (mother of Emperor Constantine) which was known as Tor Pignattara. 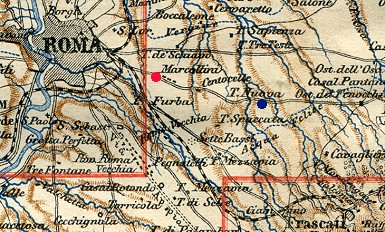 Map of the Environs of Rome (ca 1870): red dot: SS. Pietro e Marcellino; blue dot: Torrenova (where Mosaico del Gladiatore was found). The map shows locations along Via Prenestina to the north and along Via Appia Nuova to the south 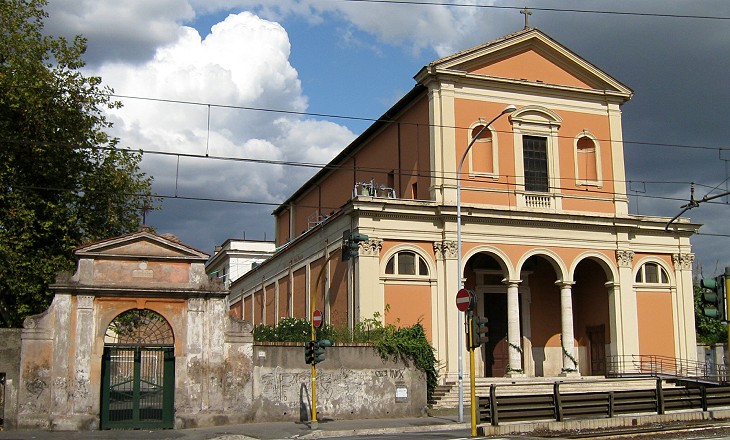 Today the area is densely populated and a large parish church was built next to the old chapel in 1922. The small portal depicted by Vasi has been modified; it most likely housed a fresco. 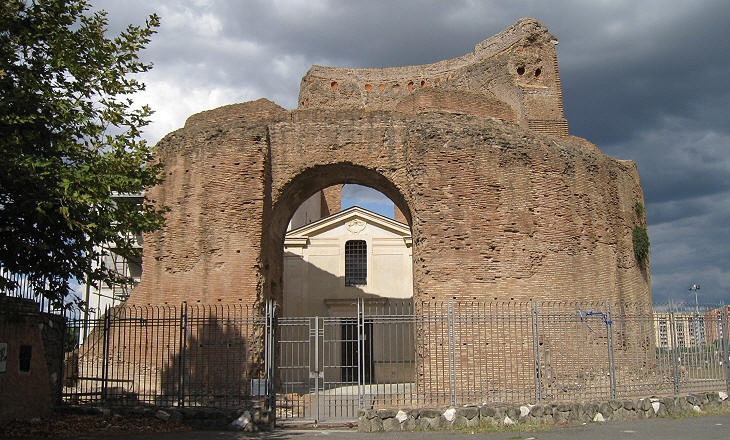 The mausoleum was a large circular building with an octagonal interior decorated with niches. Similar to other ancient mausoleums (e.g. Cecilia Metella and Sepolcro dei Plauti) during the Middle Ages it was turned into a fortification; this explains why it was called Tor (tower). The mausoleum was built next to extensive catacombs. Its brick structure brings to mind buildings at Tor de' Schavi and Tempio di Ercole Callaico, a large nymphaeum.

Detail of the construction technique utilized to lighten the dome

During the Late Empire Roman engineers lightened the weight of domes and vaults by placing empty vases inside their walls (this can be observed also at Circo di Massenzio). The vases came to light when parts of the dome collapsed; because they were called pignatte in Old Italian the tower became known as Pignattara. The image used as background for this page shows a technical drawing by Giovanni Battista Piranesi depicting one of the vases. You may wish to see a view of the mausoleum by Piranesi (it opens in another window). 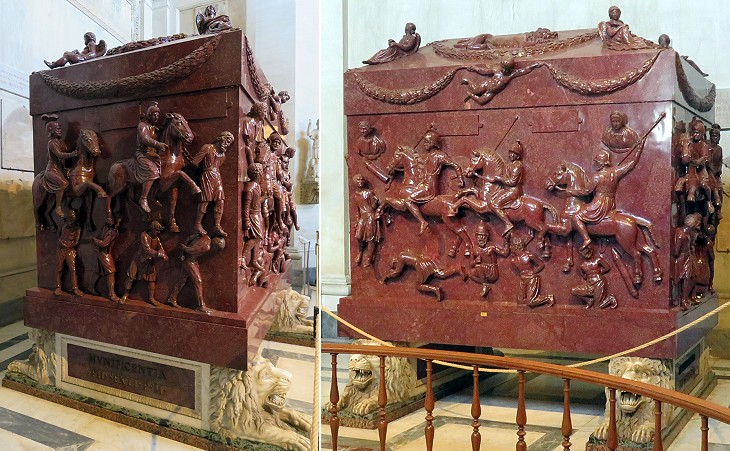 According to tradition the remains of St. Helena were brought to Constantinople two years after her death in 328; the porphyry sarcophagus which was found (with others) in the mausoleum was moved to the Lateran in the XIth century and eventually became part of the Vatican collection of antiquities; it does not have inscriptions and it is decorated with horsemen, prisoners and fallen soldiers; in order to explain this iconography which is unrelated to St. Helena, Christian writers have assumed that the sarcophagus was initially meant for Emperor Constantine himself. The decoration brings to mind a similar one in a monument to Emperor Antoninus Pius. Porphyry was utilized also for the sarcophagus of Costanza, Constantine's daughter, the stone being regarded as a symbol of imperial power. You may wish to see ancient porphyry sarcophagi at Constantinople and medieval ones at Palermo. 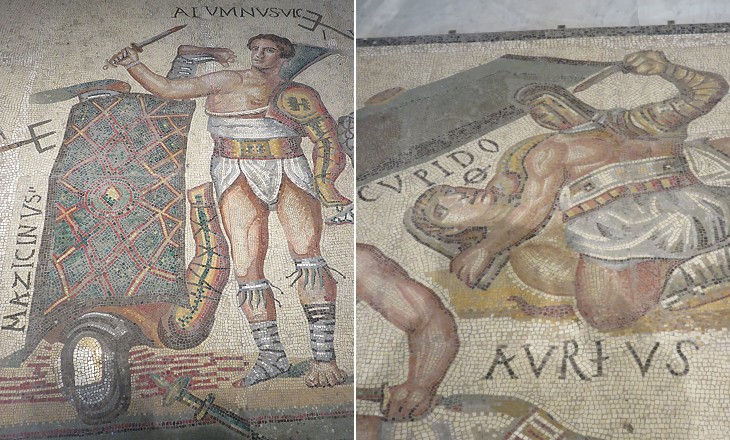 Two fights ending with the death of a gladiator

In 1807 Prince Camillo Borghese sold the collection of ancient statues and other antiquities which decorated his villa outside Porta Pinciana to Napoleon Bonaparte, his brother-in-law. In the following years he and his heirs tried hard to embellish again the building with ancient works of art which they found in their many fiefdoms. In 1834 the ruins of a Roman villa were found at Torrenova, a Borghese estate along Via Casilina. They housed a large mosaic depicting gladiatorial fights which was removed and reassembled in the entrance hall of the villa. 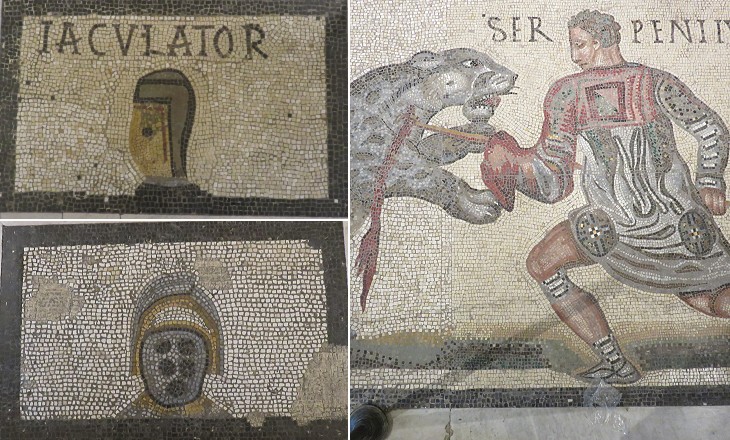 The mosaic is dated early IVth century AD. The deaths of a number of gladiators are depicted in a series of dramatic scenes with blood spilling from wounds and theta, a Greek letter standing for dead, being written next to a fallen gladiator. Another detail of this mosaic can be seen in the page covering Colosseo. Although gladiatorial fights were a common subject of reliefs and mosaics, that at Torrenova stands out for its explicit depiction of deaths of both human beings and animals. The villa where it was found might have belonged to a very rich man who offered these fights to the public. Based on this assumption the mosaic was meant to show the achievements and generosity of the landlord, rather than his having pleasure from images which are disturbing to our modern eye. 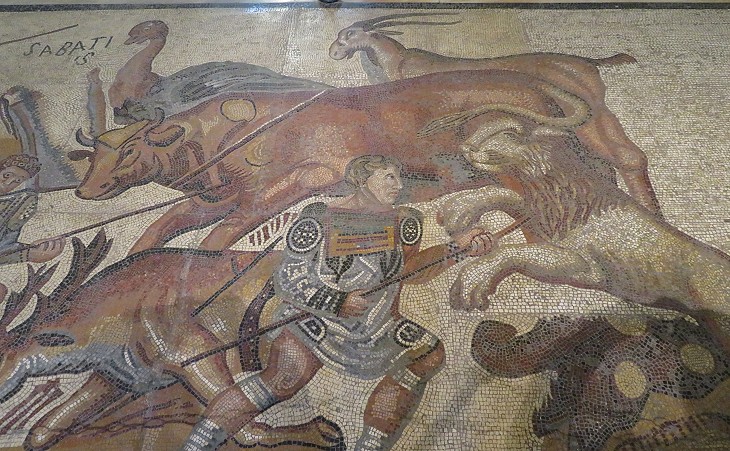 Fights with animals, some of which are more exotic than ferocious (see how they were captured and then shipped to Rome)

Next plate in Book 3: S. Clemente.