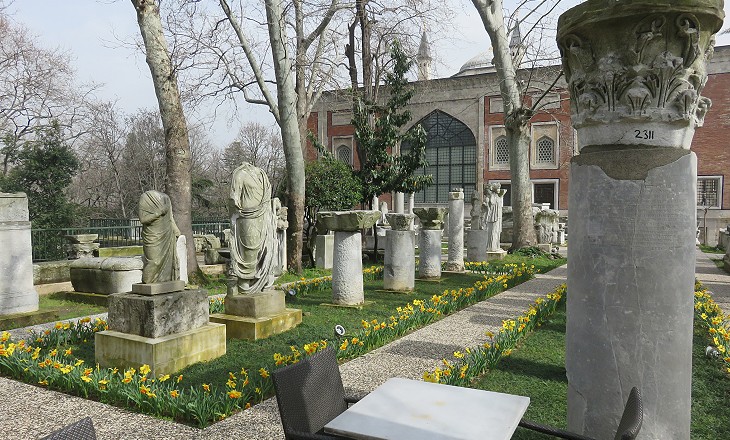 It was not until 1869 that the Sultans realized the need to house the ancient works of art of their empire in a museum. In a way it was "closing the stable door after the horse has bolted" because many masterpieces of ancient Greece and of other countries of the Ottoman Empire were already in foreign museums.
The collections of the Imperial Museum (as it was called) were initially placed in Hagia Irene. In 1880 they were moved to Cinili Kosk. A new museum building opposite Cinili Kosk was inaugurated in 1893 and enlarged in 1903 and 1907. Similar to what occurs in most Archaeological Museums of the world a number of columns, capitals, gravestones, broken statues, etc. are on display in the garden.
This page shows some of the exhibits which were found in the city. They help in understanding its long history. The majority of them are kept in a separate section of the Archaeological Museum. Another page covers some of the other collections. 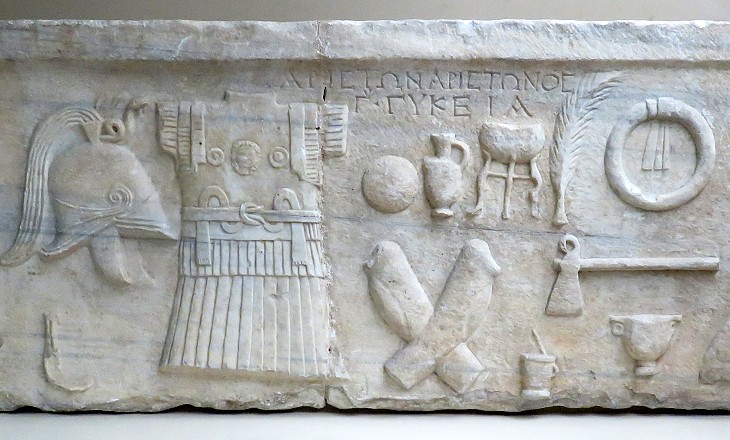 Cadicui, is a small town or village on the west side of the promontory, on which the antient Chalcedon stood. The promontory on which the antient Chalcedon stood is a very fine situation, (..) so that Chalcedon would be esteemed a most delightful situation, if Constantinople was not so near it, which is indeed more advantagiously situated; for this place must be much exposed to the wind in winter, and has not a good port. (..) There are no remains of this antient city, all being destroyed and the ground improved with gardens and vineyards: The Greeks have a small church here, which carries no great face of antiquity, and yet they pretend to say, that the council of Chalcedon was held in it.
Richard Pococke - A Description of the East and Some Other Countries - 1745
Chalcedon, a town on the Asian shore opposite Byzantium/Constantinople is best known for having housed an Ecumenical Council which had lasting doctrinal effects in 451 AD. Chalcedon was part of the Kingdom of Bithynia, an ally of Rome in the Wars against Mithridates VI, King of Pontus. Nicomedes IV, the last king of Bithynia, bequeathed his country to the Romans in 74 BC. At that time Byzantium was already a Roman possession. The military equipment depicted in the gravestone of Ariston is in part similar to that of a Roman legionary. 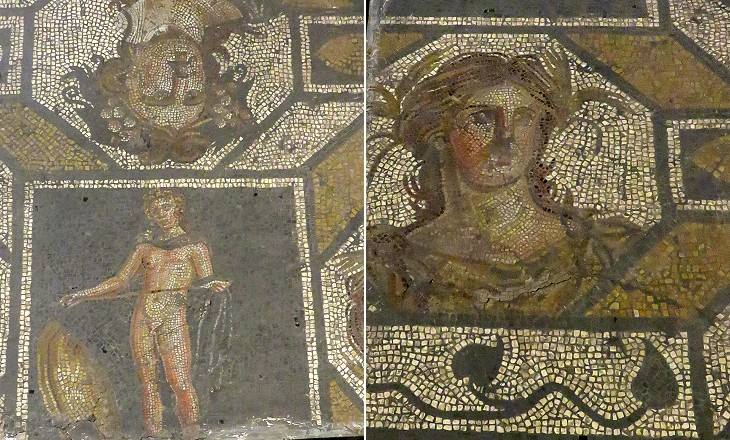 IInd century AD mosaic depicting the Four Seasons around a central figure of a naked hero/god with a shield and a whip, perhaps Perseus

Byzantium occupied only the tip of the peninsula between the Golden Horn and the Sea of Marmara when this mosaic was made. It decorated a rich house and its subject was a very popular one which can be found in all parts of the Roman Empire (e.g. in today's Tunisia). Its design follows traditional patterns and its execution is fine. VIth century mosaics decorating a courtyard of Emperor Justinian's Great Palace are shown in a separate page. 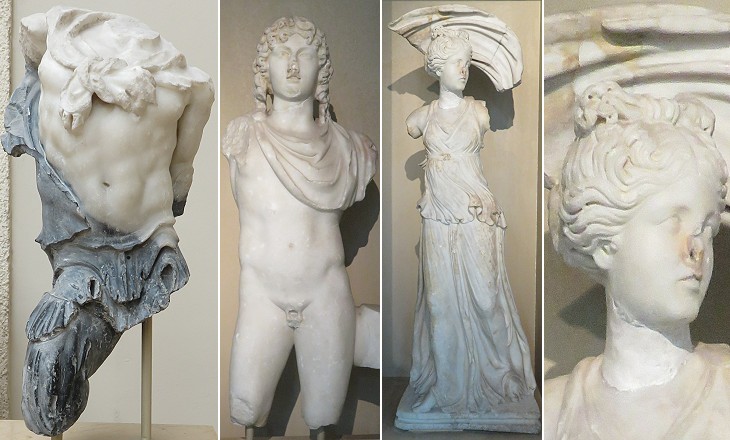 A group of fine statues is another indication of the wealth of Byzantium during the IInd century AD, a period of growth and political stability especially during the reign of Emperor Antoninus Pius. The statues were most likely made at Afrodisias, a town known for its sculpture workshops. You may wish to compare them with those found at Perge and now at the Archaeological Museum of Antalya, in particular to see another statue made with white and black marbles. 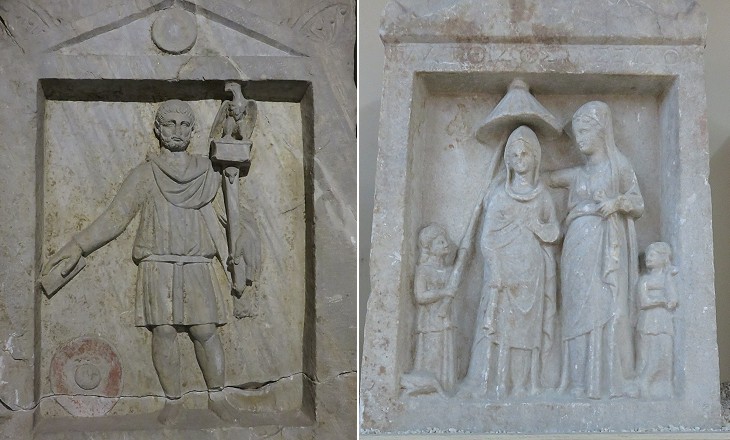 The inscription of the first gravestone says: To the divine spirits of the dead, Titus Flavius Surillio, the helpful, pious and loyal standard-bearer of the IInd Legion. He has served for eighteen years as a soldier, has lived for forty years. From the same legion, the standard-bearer Zanacs (erected this stele) for him.
Roman legions were not stationed in Thracia, the province which included Byzantium, but along the River Danube, in today's Bulgaria. In 193-194 however Thracia was affected by the war between Emperor Septimius Severus and his rival Pescennius Niger. Surillio might have been the standard-bearer of Legio Secunda Parthica, a legion founded by Septimius Severus in 197. 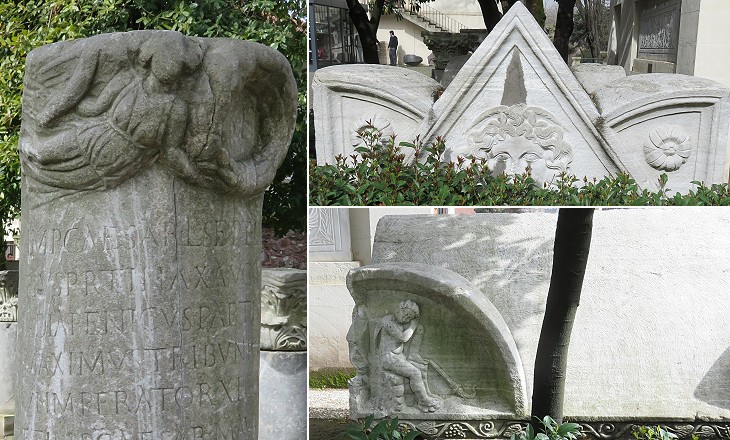 Exhibits in the garden: (left) milestone dedicated to Emperor Septimius Severus; (right) details of Pagan sarcophagi showing a head of Medusa and a child with an upside down torch, a symbol of death

Byzantium was occupied by the troops of Pescennius and those of Septimius Severus sieged the town. Pescennius managed to escape, but he was eventually defeated and killed. Septimius Severus ordered the destruction of Byzantium in retaliation for the support its inhabitants had given to his rival. Afterwards he decided to rebuild it with a new name: Antonina Augusta. In 267 Byzantium was sacked by the Goths (some Christian historians say by troops of Emperor Gallienus), but its strategic position at the entrance to the Bosporus was such that it was rebuilt again. 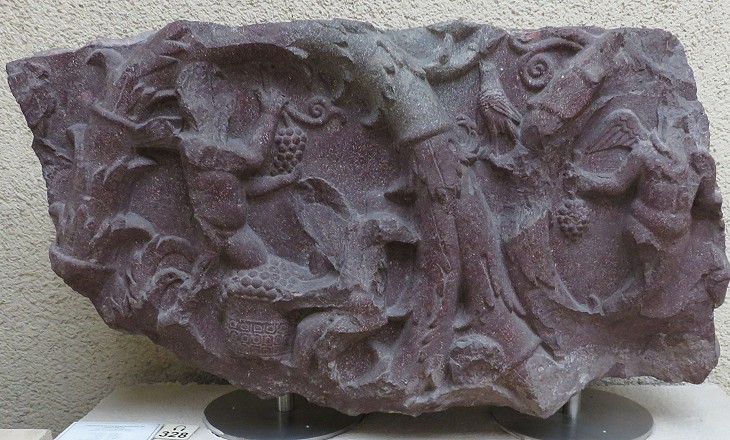 ..convinced that his life was drawing to a close, he (Constantine) felt the time was come at which he should seek purification from sins of his past career, firmly believing that whatever errors he had committed as a mortal man, his soul would be purified from them through the efficacy of the mystical words and the salutary waters of baptism.
Eusebius of Caesarea - Life of Constantine - translation by Arthur C. Mc Giffert.
According to Eusebius, Constantine had arranged for his sarcophagus to be placed in a church, where he planned to move the relics of the Apostles, which therefore was named Church of the Holy Apostles. It is perhaps more likely that the Emperor built a large circular mausoleum, similar to that of Galerius at Thessalonica and that the Church of the Holy Apostles was built next to it by his son Constantius II. The remaining fragment of his sarcophagus is very similar to that at Santa Costanza in Rome. 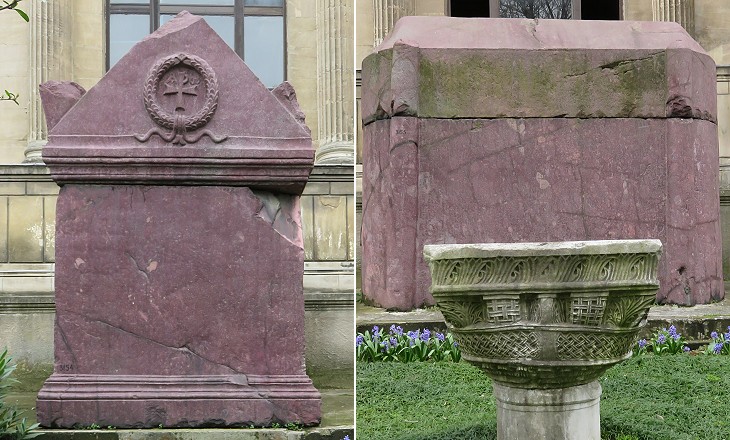 Here (in Hagia Irene) are several huge porphyry sarcophagi, said to have been brought from the destroyed church of the Apostles and to have contained the bodies of Constantine and some of his successors.
Thomas Graham Jackson - Byzantine and Romanesque Architecture - 1913.
The complex of the Holy Apostles was entirely rebuilt by Emperor Justinian in the VIth century and it housed the sarcophagi of many emperors, according to a Xth century list of them. Some sarcophagi were broken and looted by the Crusaders in 1204. The church was falling apart when Sultan Mehmet II conquered Constantinople in 1453; he decided to build Fatih Sultan Mehmet Camii, the Mosque of the Conqueror, on its grounds.

The use of porphyry was restricted to the imperial family. White marble did not have such a symbolic importance, but it could be more carefully worked. After Byzantium became the capital of the empire a local school of sculpture developed in the city. The sarcophagus shown above shows the extreme level of refinement and skill achieved by the workshops of Constantinople. Eventually they provided other cities, including Ravenna and Rome with capitals, sarcophagi and reliefs. 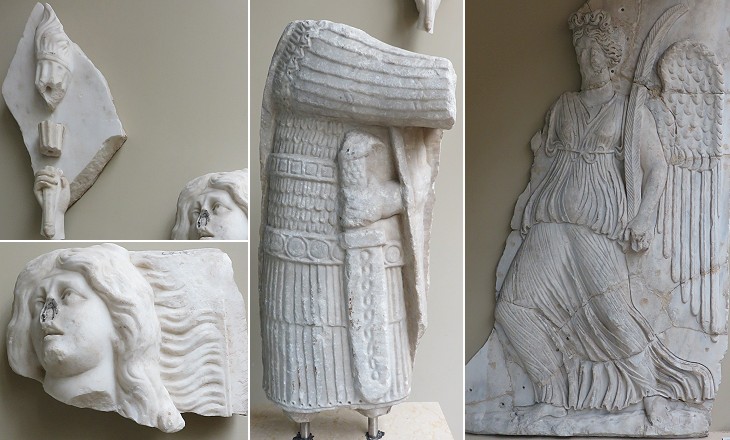 In 726 Emperor Leo III began issuing a series of edicts which forbade the worship of icons (holy images). In 718 he had managed to repel a one-year-long siege by the Arabs. Perhaps because of this decisive victory, some reliefs portraying Nike (Victory) at the sides of gates were not regarded as icons and were not smashed; statues and mosaics inside churches did not avoid this fate. They show the skill of local sculptors in the execution of very low reliefs. 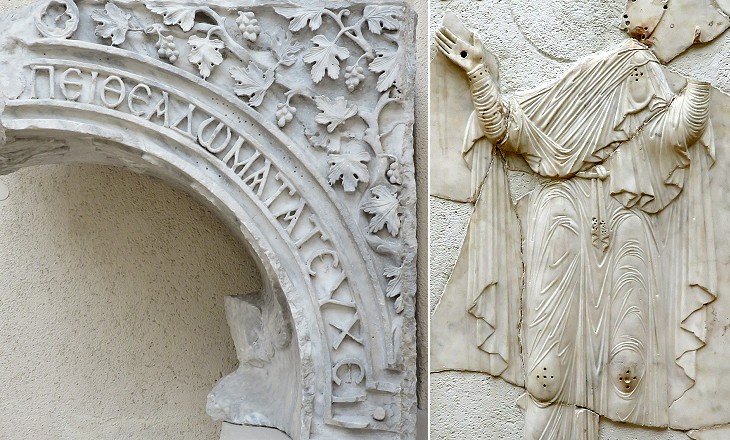 (left) Fragment of a "pergula", a marble screen separating the altar from the nave, with inscription dated 524-27; it celebrates Anicia Juliana, the founder of St. Polyeuktos': "(even you do not know how many) houses dedicated to God your hand has made"; (right) XIth century relief portraying the Virgin Mary at prayer from Gulhane Monastery, near Topkapi Sarayi; you may wish to see "Madonna Greca", a relief from Constantinople at Ravenna

Decorative motifs based on vine leaves and grapes, similar to those in Constantine's sarcophagus were often used for the decoration of canopies and other architectural elements of early churches.
The relief found at Gulhane Monastery is very interesting as it shows that the tradition of finely executed low reliefs was not lost because of the long prohibition on making holy images which ended in 843. 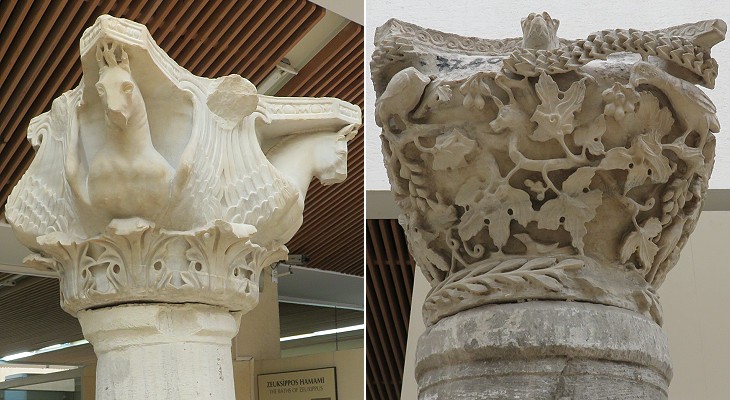 Capitals portraying animals (VIth century): (left) from the Hippodrome; (right) from near the Golden Horn

A particular aspect of Byzantine sculpture at Constantinople lay in the wide use of the drill. It allowed the making of very intricate decorations which often seem entirely detached from the plan they project from. Traditional Corinthian capitals were modified; their acanthus leaves were "flattened" or "combed" as it can be noticed in other regions of the Byzantine Empire (e.g. at Philippi and at St. Simeon's). Byzantine capitals with monograms (VIth century) in the garden; right-below from the Hebdomon

The section on the history of Byzantium/Constantinople includes some Byzantine and Genoese coats of arms which are shown in the page covering Galata.
The image in the background of this page shows a typical Roman frame on a sarcophagus in the garden. 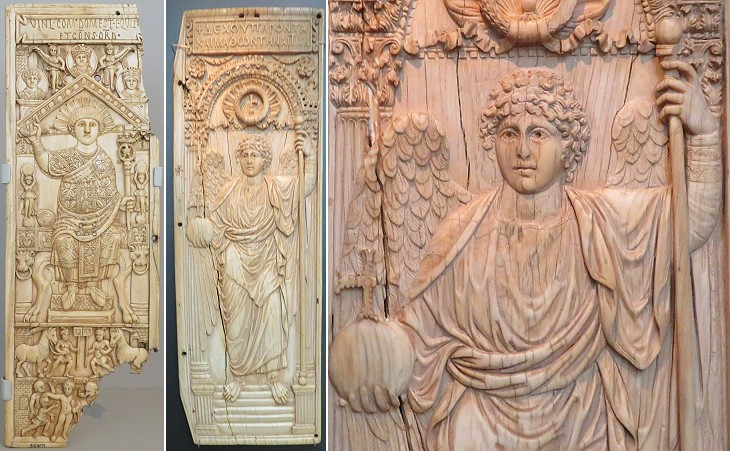 Ivory carvings became a fashionable luxury item in the IVth century; they were used to decorate caskets for relics or covers of books.