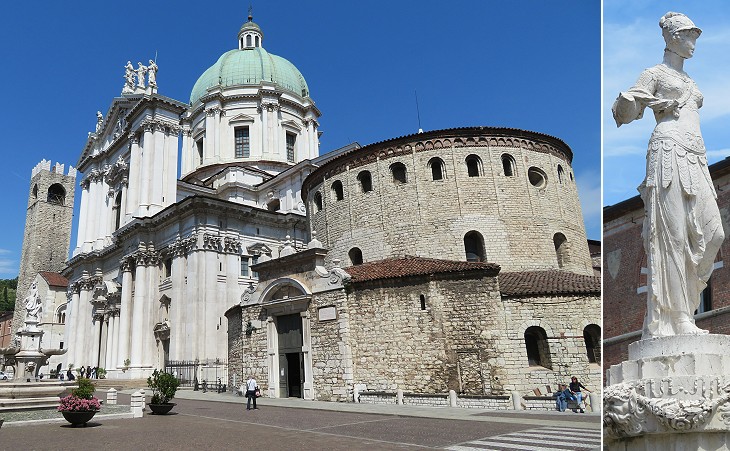 Brescia has two cathedrals. The Duomo Vecchio was built, according to some historians, between the years 662 and 671, by Marquard and Frodoard, two Lombard dukes, father and son, with the assistance of Grimbaud King of the Lombards. (..) The walls are of stone; the circuit on the outside is divided by pilasters into 24 portions, surmounted by a brick cornice.
John Murray - Handbook for Travellers in Northern Italy - 1852
The layout of Roman Brescia was based on a rectangular grid of decumani (east-west) and cardi (north-south) streets. Piazza del Duomo occupies the space between the two westernmost cardo and its monuments stand above the foundations of ancient ones. Duomo Vecchio, aka Rotonda, was built in the XIIth century in Romanesque style above a previous church which was turned into its crypt. 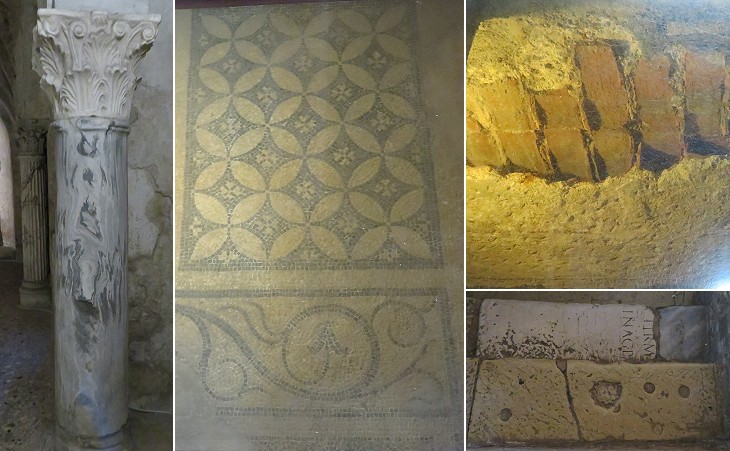 Rotonda - crypt: (left) ancient columns and capitals; (centre) floor mosaic of Roman baths; (right-above) pipes of the heating system of the baths; (right-below) ancient stones in the steps leading to the crypt

Within there is an insulated peristyle of eight piers, bearing round arches, which help to support the dome, in conjunction with the outer circle of walls. The interior has been much altered. Some medieval tombs are still left. (..) Under the cathedral is the crypt, supported by 42 columns of fine marble; many of the shafts appear to be ancient. Murray
Archaeological research in the crypt uncovered evidence of a Vth or VIth century church and of Roman baths; the ancient columns and capitals of the crypt might have belonged to other Roman buildings in addition to the baths.

Rotonda: floor mosaic of the earlier church which was paid for by Syrus, a deacon: "h(unc) l(ocum) t(essellavit) c(um) s(uis)" (he and his family decorated this place with floor mosaics); see a more complex abbreviation in a Roman funerary table for a child

The practice of members of early Christian communities paying for the floor mosaics of a church can be noticed in other towns covered in this section, e.g. at Aquileia, Grado and Verona; the inscriptions often indicated the size of the floor the donors paid for and were not accompanied by images. That of Syrus portrays a flock of sheep, a symbol for a Christian congregation, a subject which can be seen also in a grand apse mosaic at S. Apollinare in Classe at Ravenna. 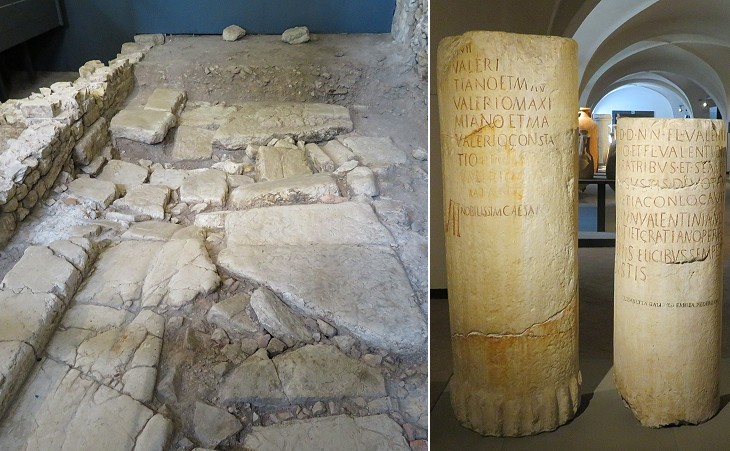 Museum of the City of Brescia at Santa Giulia: (left) Roman street; (right) milestones with dedicatory inscriptions to Maximian and Constantius Chlorus (left) and Valentinian and Valens (right)

In 568 the Longobards invaded Italy and Brescia became the capital of an important duchy and it retained this role in the Holy Roman Empire. It then flourished as a libero Comune and during the long Venetian rule (1426-1797). These historical periods all left their mark on an area at the north-eastern corner of the town which belonged to the Benedictine nunnery of Santa Giulia, which was founded in 753.
In 1999 the City of Brescia inaugurated a museum in the premises of the former nunnery which is also an archaeological area, because of some very interesting findings of the Roman town, including a section of a decumanus. It displays Roman exhibits from the Capitolium/Forum area and from other parts of the town and its environs. The milestones were placed along Via Gallica, a Roman road which branched off Via Postumia at Arilica (Peschiera del Garda) and led to Brescia, Bergamo, Milan and Turin (in the Ist century BC the Romans called Gallia Cisalpina their territories north of the Apennines and south of the Alps). 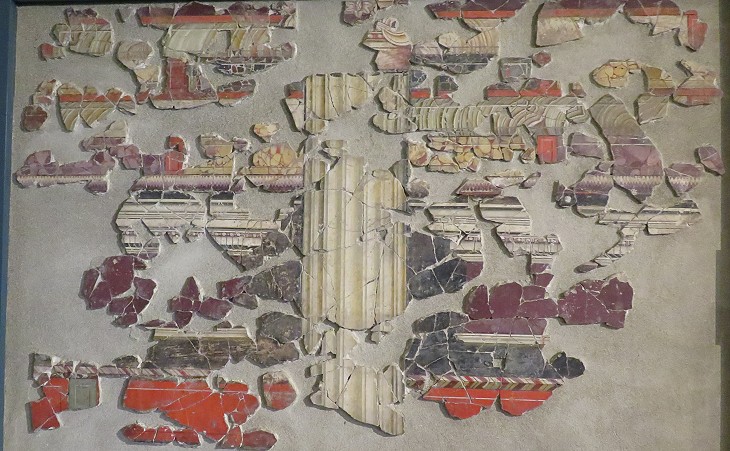 "Ortaglia" indicates a poorly kept kitchen garden; this term was used for an abandoned piece of land behind the nunnery after its deconsecration in 1797. In 1967, almost by chance, evidence of Roman houses was found there and excavations carried out in the following years led to unearthing their floors and the lower parts of their walls. Two adjoining houses were clearly identified and they form an archaeological area inside the museum; decorative elements of other houses are on display as separate exhibits. 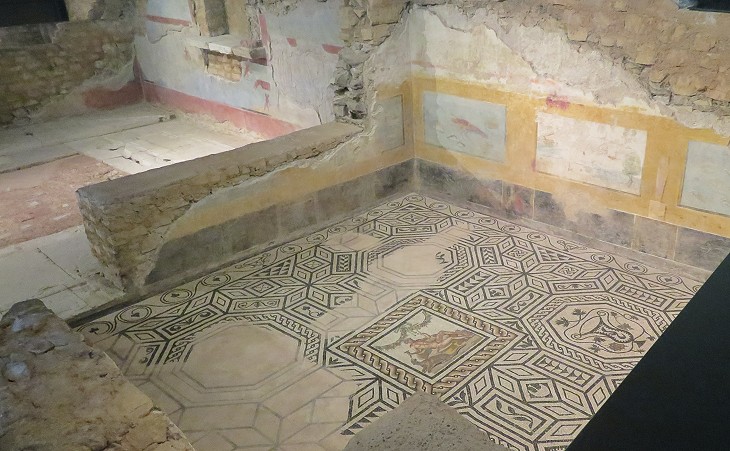 One house is named after an emblemata, small section portraying figures (see some emblemata at Villa Adriana), of a floor mosaic which portrays Dionysus in the act of pouring wine to his panther (a term used by the Greeks to generically refer to a big cat). It is dated IInd century AD and its decoration reflects a mix of techniques and subjects which is a small compendium of Roman art. Dionysus was a very popular subject for the decoration of triclinia, the Roman dining rooms; he was portrayed in an emblemata as at Cologne, but also on the whole floor mosaic as at Sousse. 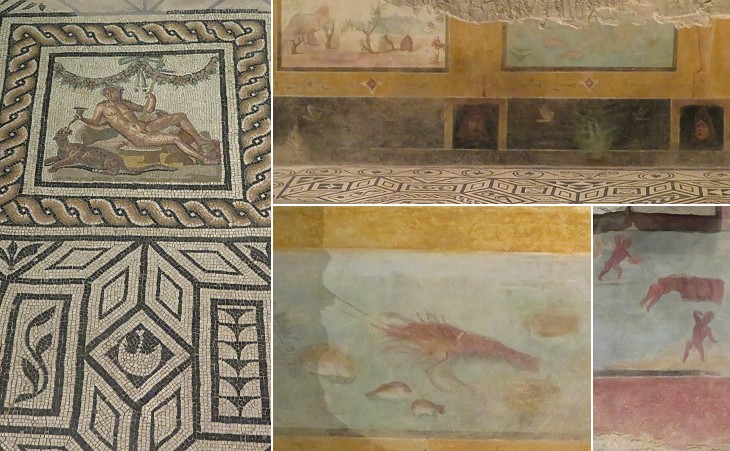 Domus of Dionysus: details: (left) black and white geometric mosaic with a coloured "emblemata"; (right-above) wall with a band on a black background showing theatrical masks, plants and birds; (right-below) sea creatures (see a full catalogue at Tarragona) and pygmies fighting against a hippo

Some of the decorative subjects of this house have been found also at a Roman house at Verona, whereas the scene with the pygmies is less common; it is called a "Nilotic scene" because it is usually depicted in large mosaics showing life along the River Nile (see a mosaic at Rome with pygmies hunting hippos and crocodiles, a mosaic showing the Nilometer at Sepphoris and the well known Mosaic of the Nile at Palestrina). You may wish to see paintings on a black background at Villa della Farnesina in Rome. 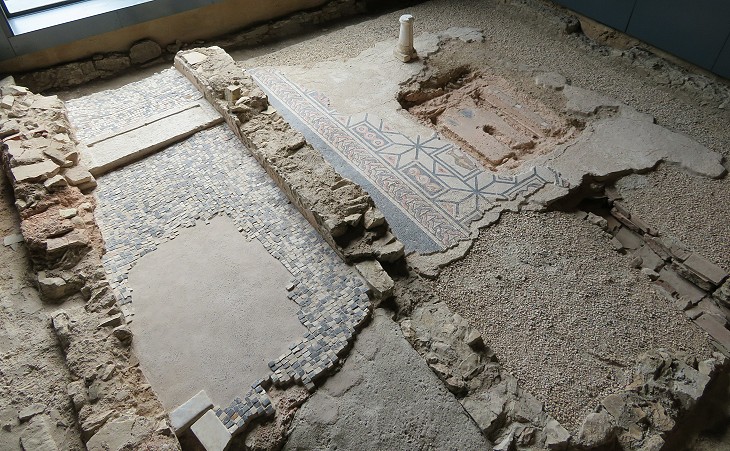 Domus delle Fontane (see another view in the introductory page)

There is another room, which, being situated close to the nearest plane-tree, enjoys a constant shade and green. Its sides are encrusted with carved marble as far as the dado, while above the marble a foliage is painted with birds among the branches, which has an effect altogether as agreeable as that of the carving, at the foot of which a little fountain, playing through several small pipes into a vase it encloses, produces a most pleasing murmur.
Pliny the Younger - Letters - To Domitius Apollinaris - Harvard Classics
The second house is named after fountains which embellished some rooms and which were supplied by a complex system of pipes. The Romans loved to have fountains in their gardens (see the painted ones at Villa di Poppea near Pompeii), but also small ones inside the house, as that found at Tarragona. This usage passed to the Islamic culture (see an Arab-Norman palace at Palermo). 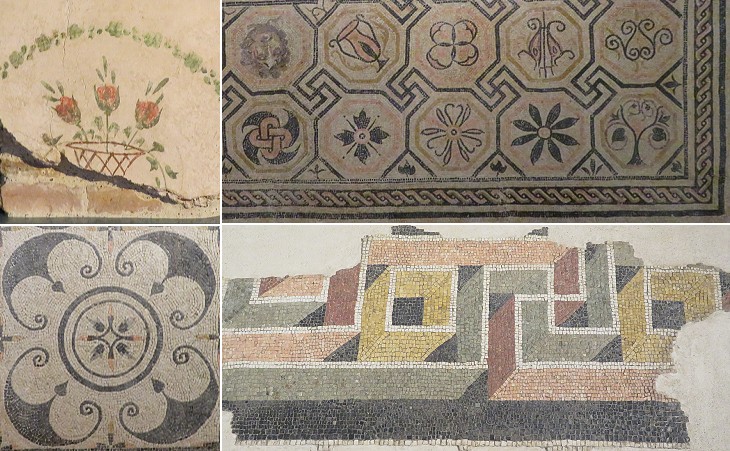 Other details of the Domus

Mosaic makers most likely showed their prospective customers a catalogue of patterns from which choose the decoration of their floors; Solomon's knots, pelta, meanders were among the most popular ones. This house has a fine example of meander pattern which creates an optical three-dimensional effect resembling a maze (it can be seen also at Rome and Ravenna). 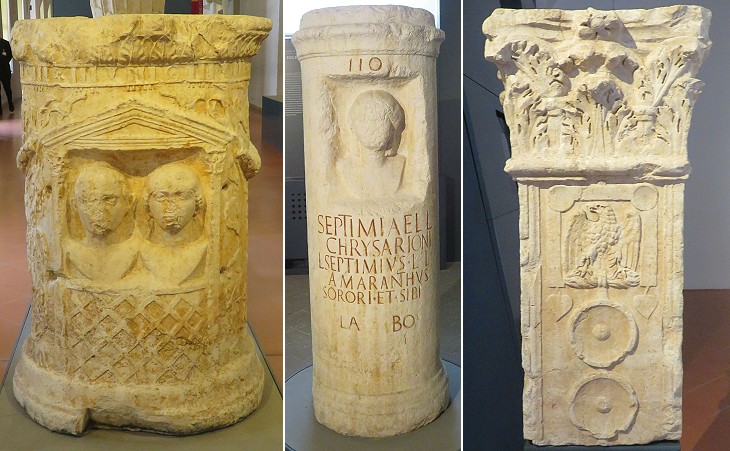 The many tombstones which were found in town and its environs help to form a mental picture of the society of Brixia (Brescia). The tombstone at the centre is dated early Ist century AD and it was already mentioned in a book published in 1615 by Ottavio Rossi, a local historian. At that time it was inside a church in the environs of the town, perhaps it was used to support something, as at S. Zeno all'Oratorio in Verona. The inscription says that the tombstone was erected by Amaranthus for his sister Crysariona (and for himself); they were both liberti (freedmen) of Lucius Septimius, whose name they placed before their own. Amaranthus is a Latinized Greek name which means unfading flower, so most likely the two freedmen came from a Greek-speaking province of the Empire. 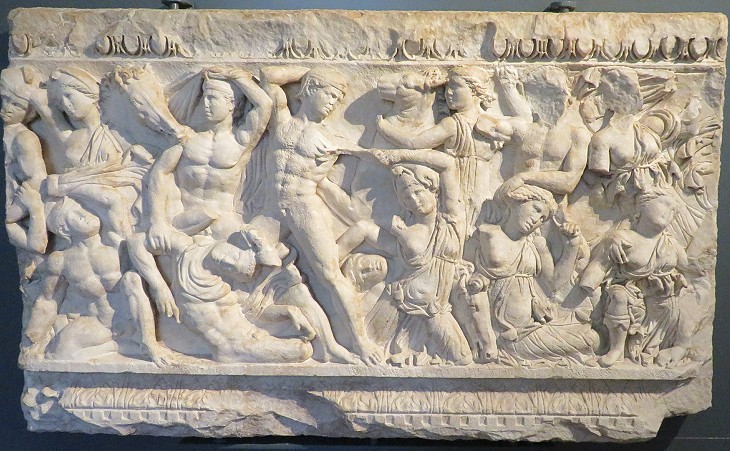 Fragment of sarcophagus which was used to pave the floor of S. Salvatore, the church of Santa Giulia; it depicts an Amazonomachy, a battle between Greeks and Amazons (see two other Amazonomachies in sarcophagi at Musei Vaticani and Musei Capitolini)

S. Salvatore was repeatedly modified through the centuries; the curators of the museum decided to eliminate some of the additions which were similar to those in many other churches of Brescia; in doing so they discovered that parts of the floor of the church was made by using the flat surface of the inner side of Roman sarcophagi. In some instances the reliefs were found in pretty good conditions and are now on display in the museum. A fragment from a Christian sarcophagus is shown in the image used as background for this page; it depicts Jonah resting under a tree (Jonah 4:6), an episode which can be seen also in a sarcophagus at Arles. 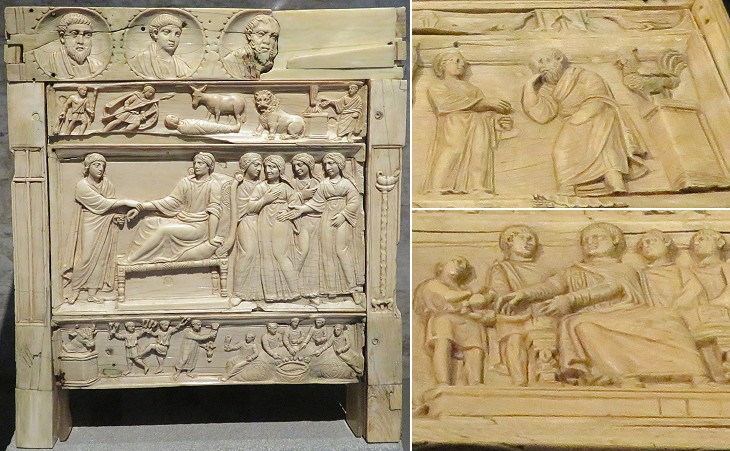 Ivory casket for relics (late IVth century): (left) upper band: David kills Goliath and other subjects; central panel: Raising of Jairus' daughter with Jesus portrayed as a young man, similar to what can be observed in a mosaic at Ravenna; lower band: Worship of the Golden Calf; (right) lid: (above) Denial of Peter, with crowing cock; (below) Pontius Pilate washes his hands of Jesus

This luxury item was most likely donated to the nunnery of Santa Giulia by King Desiderius, its founder. It is thought to have been made in Milan at the time of St. Ambrose (late IVth century); the execution of the reliefs follows traditional realistic patterns which can be seen in Roman sarcophagi, whereas ivory carvings made in Constantinople are characterised by more symbolic depictions. Some of the 36 scenes of the casket still puzzle art historians and theologians who cannot fully explain their subject. You may wish to see a IVth century silver casket at Rome. Another luxury object which ended at the nunnery is a gold/glass medallion which decorates a medieval crux gemmata, a gem-studded cross (according to tradition another gift by King Desiderius). It portrays a mother with her two children; in the past they were thought to be Gallia Placidia with her son Valentinian III and her daughter Giusta Grata Onoria, but there are no real elements to support this identification. The type of portraits, details of the hairstyles and the knot of the robe of the mother suggest the medallion was made in Egypt in the IIIrd century AD. The inscription in Greek could be the name of the father. 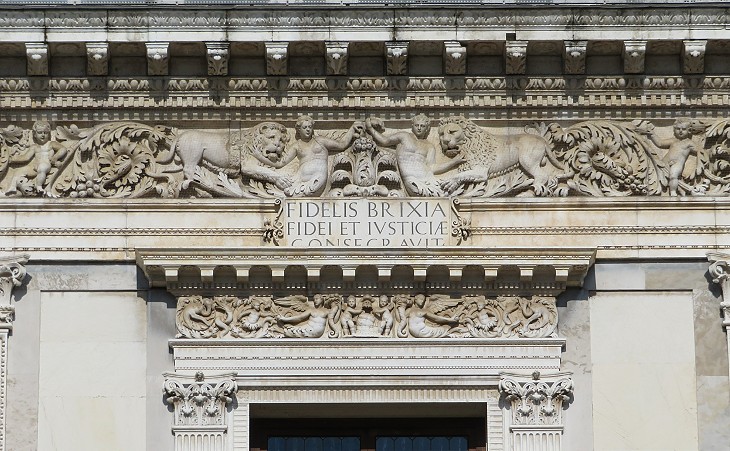 Several of the first architects of the 15th and 16th centuries have successively worked upon this beautiful building, which was intended for the palace of the municipality, or town-hall. (..) It was continued by Sansovino, and completed by Palladio; yet the rich, varied, cinquecento style predominates, and it is one of the finest specimens of its kind.(..) The pilasters and friezes are covered with rich-sculptured scalework, foliage, and capricci. Murray
The artistic heritage of Brixia surfaces in the Renaissance decoration of Palazzo della Loggia.