You may wish to see a page on ancient Porto or the first page on the Great Necropolis first. 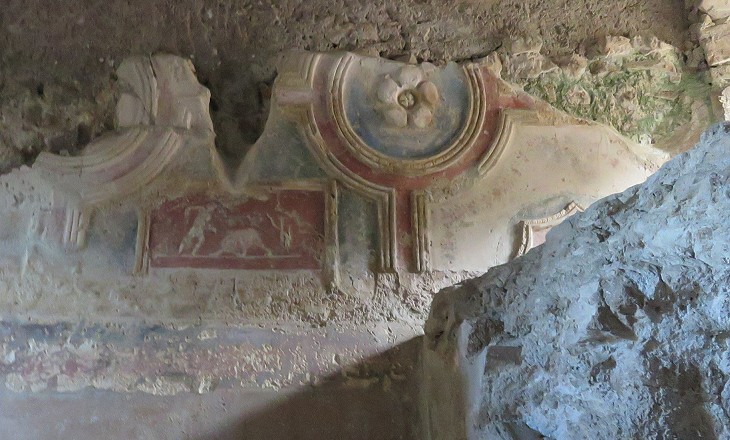 The piety towards the dead is shown by the careful decoration of some tombs. The stucco ceiling shown above belongs to a burial chamber dedicated to Publius Gabinius Annianus, who lived sixteen years, by his mourning parents. Stucco decoration of a niche in Tomb 16. It depicts Silenus, the tutor and companion of Dionysus, on a donkey next to Pan and a small column

Many tombs and sarcophagi at Porto and elsewhere were decorated with scenes of the life of Dionysus/Bacchus or of the celebrations in his honour (Bacchanalia). These subjects may seem not appropriate for a tomb to our modern eyes. Dionysus was the born-twice god, because after having been killed when he was a baby by order of Hera, he was recreated by Zeus out of his thigh. Because of this event he was regarded as the god of Resurrection and references to him were made in many tombs. Scenes hinting at Bacchanalia and grape harvests continued to be depicted in early Christian tombs and sarcophagi, as at S. Costanza. You may wish to see Dionysus' second birth in an interesting floor mosaic at Paphos and in a relief which was found near Porta Portese. 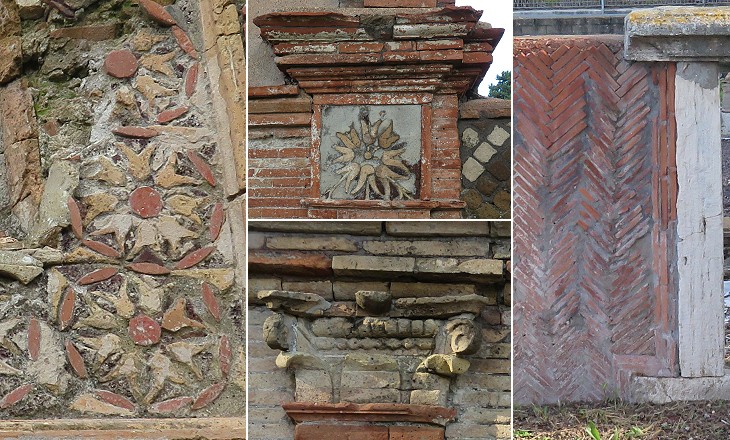 Some of the tombs along Via Appia Antica and that of Annia Regilla have a very elaborate brickwork decoration. This type of decoration can be seen in some tombs of the Great Necropolis, although not in many of them.
The enclosure of Tomb E25 shows a rare example of opus spicatum, a wall with bricks placed in a herringbone pattern (Lat. spica means ear of wheat). Opus spicatum was mainly used for pavements. 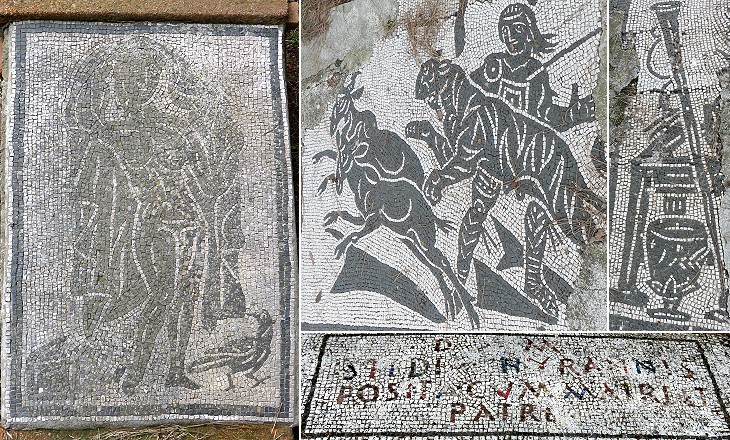 (left) Mosaic portraying Venus in Tomb 75; (right-above) mosaics not belonging to an identified tomb at the entrance to the archaeological area; (right-below) Tomb 86: coloured inscription: "Stedia Thyrannis is buried here with her mother and father"

Black and white mosaics have been found in most of the tombs. Coloured mosaics gained ground in the IIIrd century and in some instances, as that shown above, they were used to state that a tomb (or part of it) had new owners. 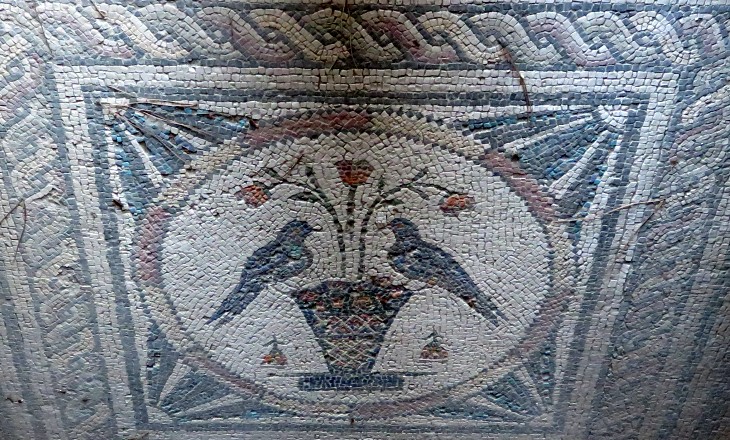 Floor mosaic in the upper, newer section of Tomb 42

In general the quality of the floor mosaics is rather poor, but in some instances greater care was placed in their execution. 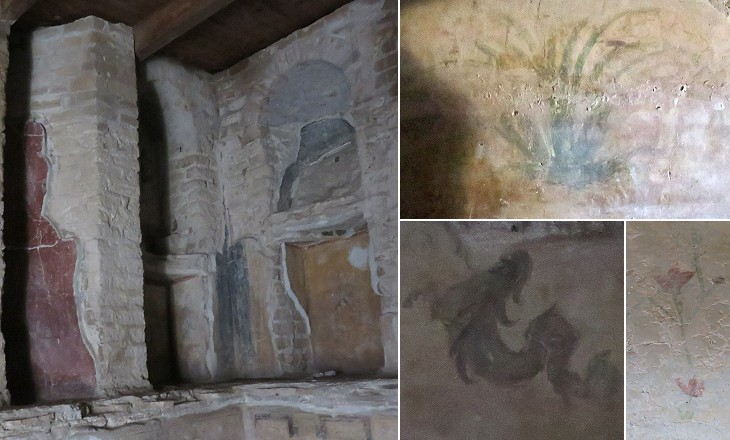 The paintings at the Great Necropolis had only a decorative purpose and they were consistent with the Roman tradition: yellow, red and black backgrounds having subjects (flowers, sea animals, etc.) of a very small dimension at their centre. 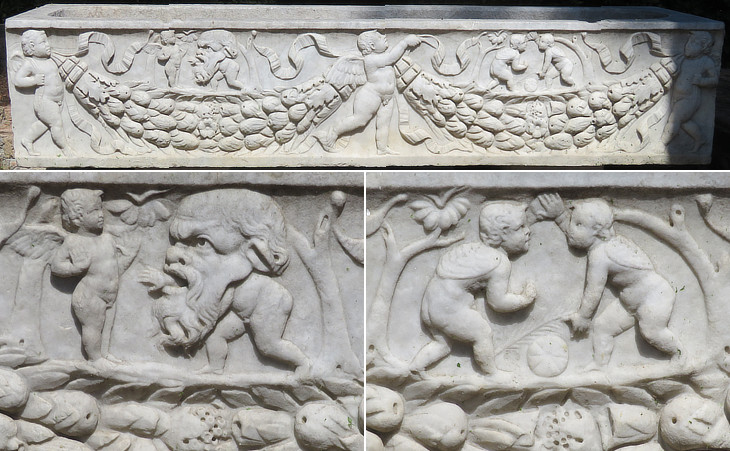 When the Great Necropolis was initially developed cremation was the prevailing method of burial and the tombs had small niches where funerary urns were placed. Towards the end of the IInd century inhumation inside sarcophagi gained ground. It appears that the citizens of Porto had a liking for a light decoration of their resting places (see another beautiful sarcophagus found at the necropolis in a page on Roman funerary rites).

Inscription in Tomb 97, which was built by Caius Annius Proculus and Caius Nymphidius Ogulnianus for Iulia Apollonia, their very beloved mother

In most of the tombs archaeologists have found inscriptions which were usually placed above the entrance. They were well carved and contained details about the building and its usage. In this inscription the size of the tomb (25 feet wide and 25 feet long) is stated together with its use by the freedmen of the family. In other inscriptions there are warnings about persons who are forbidden to enter the tomb, limits to its possession by people outside the family, prohibitions of bringing in a strange body or bones and details on the sarcophagi which are still to be paid and on other practical matters. 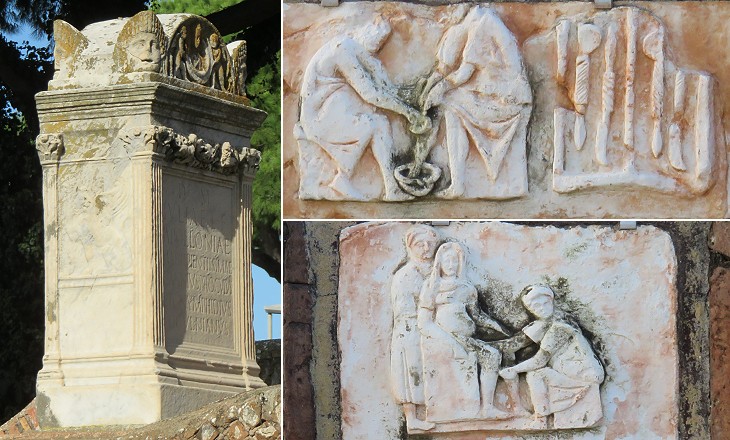 The dead were sometimes remembered by small busts or altars, but a peculiar aspect of the Great Necropolis is the number of reliefs showing the dead at work.
Tomb 100 was built by a dual-career couple: Marcus Ulpius Amerinus (perhaps from Ameria, today's Amelia) was a doctor and he was portrayed while treating the leg of a patient next to whom we see his medical equipment; Scribonia Attice, his wife, was a midwife and she is shown while helping the delivery of a baby. So these reliefs show that "professional couples" are not an invention of our modern society and that Roman women were not confined to domestic chores. 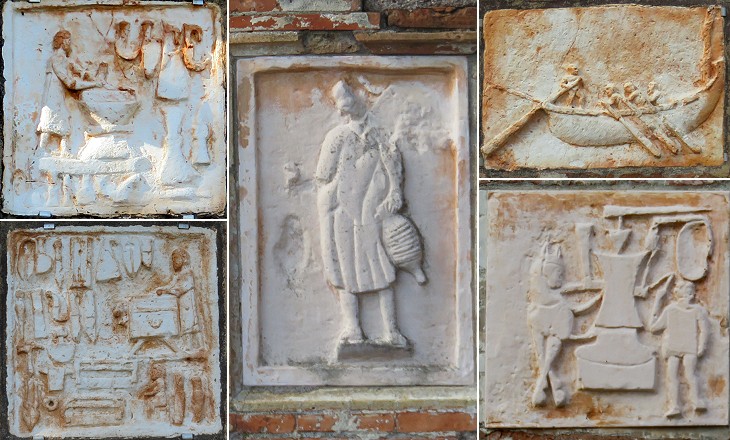 In Tomb 29 two reliefs show a manufacturer of iron tools at work and in his shop. He is surrounded by the many types of tools he made. In the same tomb, but in another place, a relief portrays a water seller, but maybe the dead man was a manufacturer of jars. Tomb 78 perhaps belonged to the owner of Mulino del Cardo, a large mill/bakery establishment at Ostia. He might have been directly involved in the purchase of grain abroad. 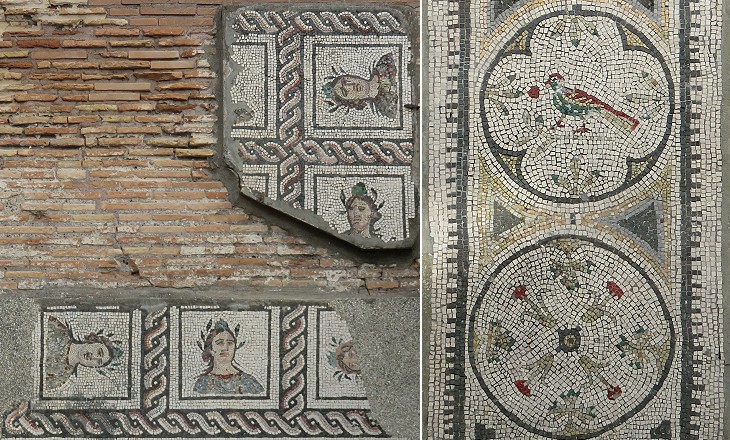 In tombs which had been designed for cinerary urns, often the space for sarcophagi was obtained by digging the pavement, burying the sarcophagi and then covering them with a new mosaic. A subject similar to the Nine Muses indicates that the move from cremation to inhumation did not involve a departure from the traditional religion. 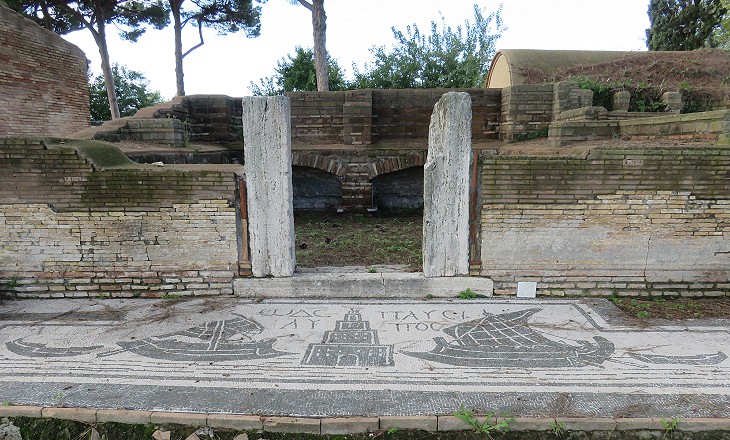 The floor mosaic outside Tomb 43 is likely a reference to the trade of the dead man, presumably a ship-owner, but the Greek words ("This is a place free of fear") could give another, more metaphysical meaning to it. In that case the lighthouse of Portus would represent the reaching of peace at the end of life, a sort of "Rest in Peace". 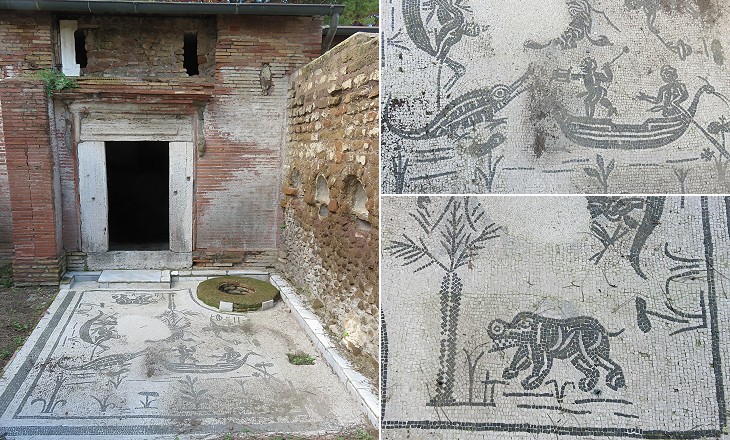 Tomb 16 and details of its "Nilotic" floor mosaic

The Romans were fascinated by the civilizations of some of the countries they conquered. Mosaics depicting Nilotic scenes were not unusual in Rome (e.g. those found at Vigna Maccarani and at Palestrina). The floor mosaic of this tomb is most likely a direct descendant of the scenes of fishing and hunting in the swamps of the Nile which were painted in ancient Egyptian tombs. The crocodile and the hippopotamus were the evil animals which had to be killed to allow the ship of the dead to reach the underworld, but the Roman mosaics have a very light tone. 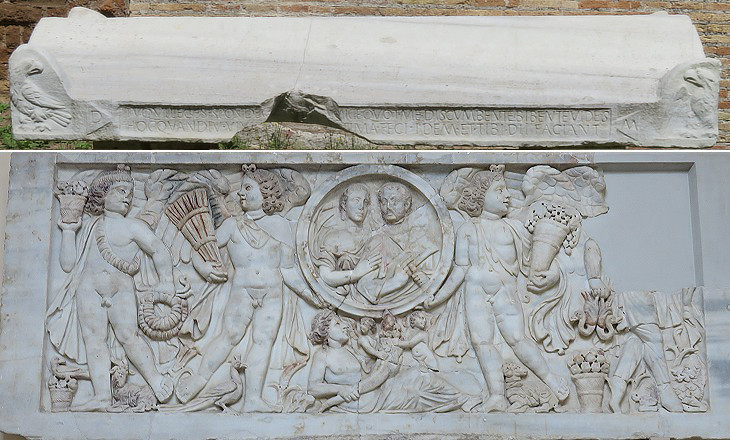 (above) Lid of sarcophagus near Tomb 20; (below) sarcophagus found in Tomb 36, now at Museo di Ostia

In some inscriptions of tombs along Via Appia there is a message for the passers-by to stop and think about the dead. The lid of this sarcophagus has a similar contents: Thou, friend (..) who shall read this, while I am lying down and who will see this during his life, I have done this when I was alive (..) and may the gods do this also to you. The message is cryptic because of two missing words, so we do not know whether it contains a curse or not (and whether we should touch wood or not).
Some of the sarcophagi of the Necropolis were made elsewhere and they were finished at Porto with the portrait of the dead. In the case shown above a couple was portrayed inside a clipeus, a round shield, so that the sarcophagus is classified as having an imago clipeata. The empty round space could be filled with another subject as shown in a Jewish sarcophagus from Porto at Museo Nazionale Romano.

Return to Ancient Porto or to the first page on the Great Necropolis or move to Medieval Porto and Modern Fiumicino.