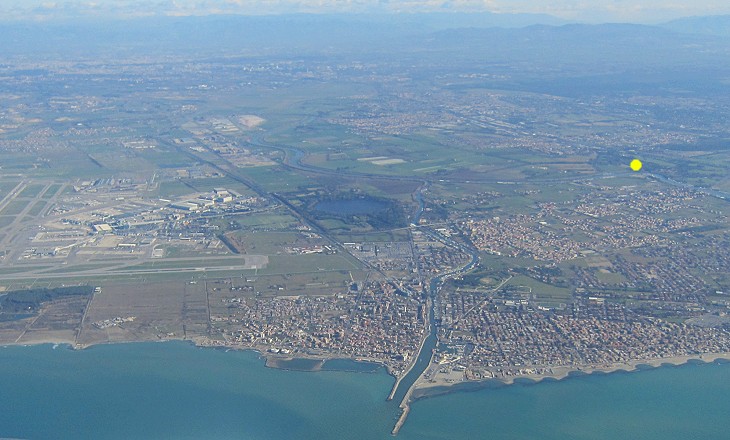 Aerial view of the hexagonal harbour built by Emperor Trajan and of Fiumicino, the modern town at one of the two mouths of the River Tiber which gives its name to the nearby main airport of Rome. The yellow dot indicates the site of ancient Ostia and of the main branch of the river

Porto retained its role as terminal of maritime routes until the VIth century, when the war between the Byzantines and the Goths for the control of Rome led to a dramatic decrease and impoverishment of its population. In the VIIth century the Arab expansion into northern Africa put the final seal on the decline of Porto. The harbour was progressively silted while the canal leading to it became a second mouth of the Tiber, thus creating Isola Sacra, a river island. 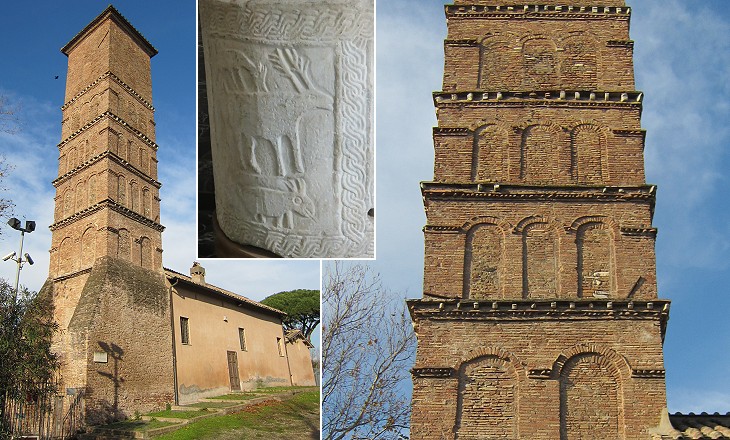 Gregorius, the first recorded Bishop of Porto attended a council summoned by Emperor Constantine in 314, shortly after the Emperor had granted Christians the right to openly profess their faith. The first cathedral of Porto was most likely located very near the harbour. It was eventually moved south of the canal to a basilica which was dedicated to St. Hippolytus of Rome; today only the foundations indicate the existence of the church, although the bell tower shows that it was still utilized in the XIIth century. In 1579 Pope Gregory XIII turned it into a watch tower and because it was far from the coastline its height was significantly increased. 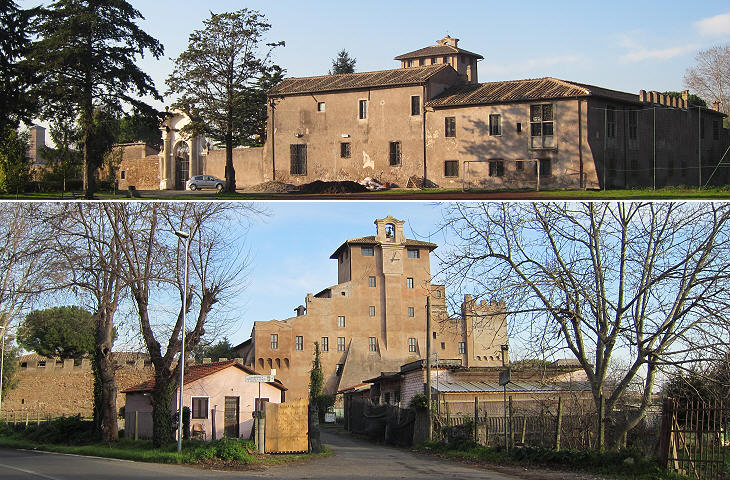 (above) Episcopio (Bishop's Palace) di Porto seen from Via Portuense, the road from Rome (the bell tower of S. Ippolito is visible on the far left); (below) the side of the complex towards the sea

Formosus, Bishop of Porto (and Pope in 891-896) relocated the bishopric see to Isola Tiberina; some of the relics of St. Hippolytus were moved there and S. Bartolomeo all'Isola became the new cathedral.
In 1463, at a time of a renewed interest in the Ancient World, Cardinal Juan de Carvajal, Bishop of Porto, decided to resurrect the original see of his diocese by receiving Pope Pius II in a temporary accommodation inside a small medieval castle near Trajan's Harbour. 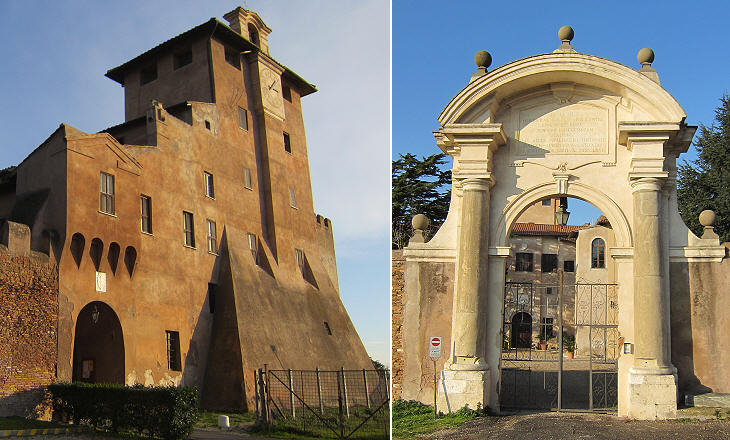 In 1476 Cardinal Rodrigo Borgia was appointed Bishop of Porto and he decided to repair the medieval castle, improve its fortifications and build a small palace where he received Pope Sixtus IV. Porto was a "suburbicarian" (in the vicinity of Rome) diocese and it was assigned to a senior cardinal; today there are seven such dioceses and that of Porto is assigned to the Vice Dean of the College of Cardinals. 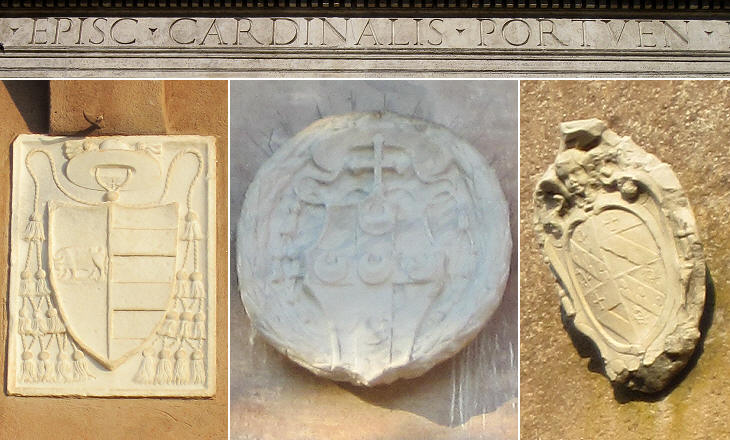 Some of the bishops of Porto were elected popes: the last one was Cardinal Pier Francesco Orsini who became Pope Benedict XIII in 1724. 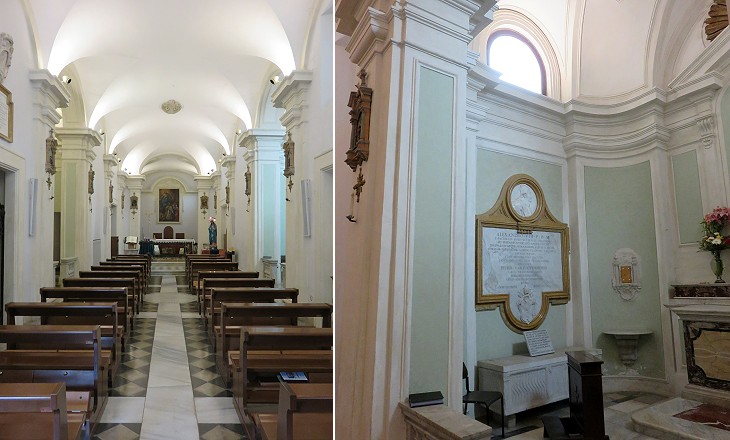 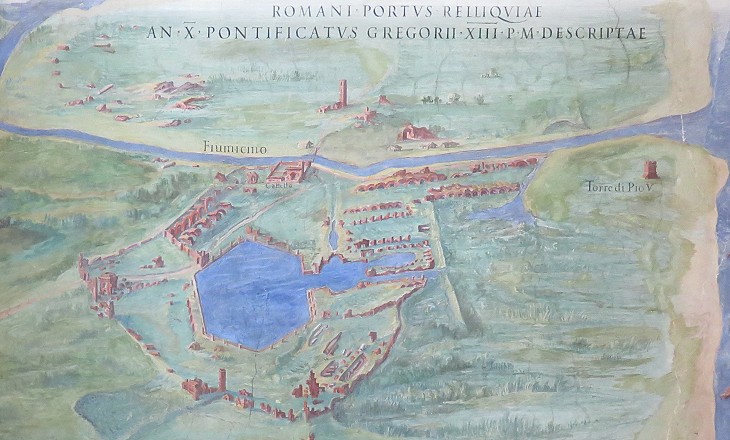 Porto in 1582 in a fresco at Galleria delle Mappe Geografiche in the corridors of Palazzo del Belvedere in Rome. It shows Episcopio di Porto (Castello) on the edge of the Fiumicino canal and the tall bell tower of S. Ippolito beyond it. Near the coastline it shows "Torre di Pio V", i.e. Torre Nicolina (see below in the page).

Se vai a Porto, torni morto "If you go to Porto, you will come back dead (because of malaria)" this lugubrious saying had its impact on the bishops of Porto. They preferred to live in Rome and have a vicar taking the risk of staying at Episcopio, which was surrounded by unhealthy marshes. 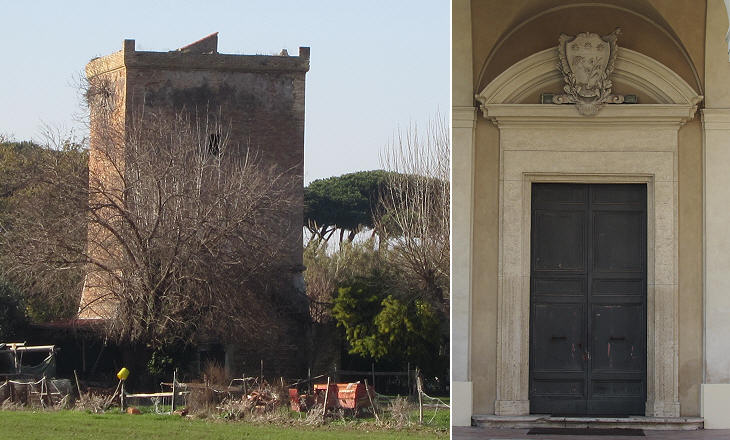 In addition to malaria the few inhabitants of Porto were at risk of being taken into slavery by pirates from Algeria and Tunisia. This risk grew in the XVIth century when pirates were encouraged to intensify their raids by the Ottoman Empire, but already in 1450 Pope Nicholas V ordered the construction of a tower near the coastline of the time (Tor S. Michele, a nearby tower built in 1568, can be seen in a page on today's Lido di Ostia).
In the late XVIIIth century the risk of pirate raids was greatly diminished and Pope Pius VI decided to promote fishing activities by building a small village and a church on the southern side of the river mouth. 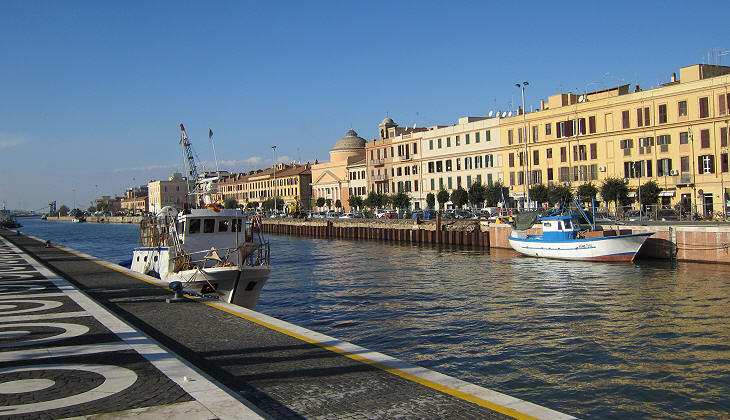 In 1823-1827 a more meaningful attempt to promote fishing activities was made by Pope Leo XII on the northern side of the river mouth; a small town was designed by Giuseppe Valadier, the architect who is best known for having modified the aspect of Piazza del Popolo.
The name Fiumicino derives from Latin focem micinam, small mouth, because of the size of the ancient canal when compared to the natural mouth of the river. 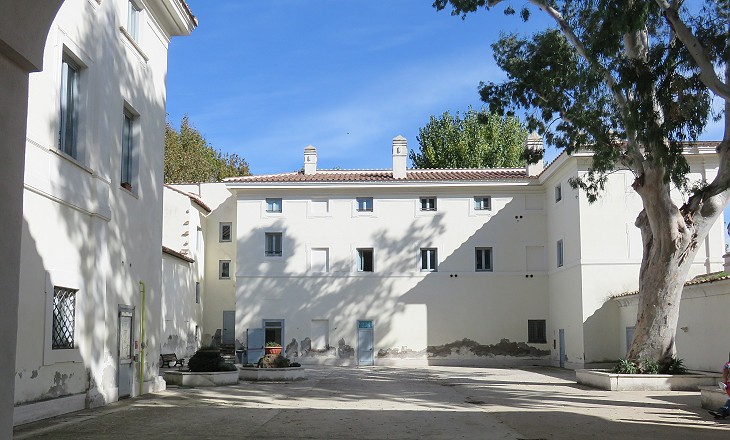 In 1831 the Papal Government sold Isola Sacra to the Guglielmi, a family of rich landowners of Civitavecchia and Montalto (where they turned a medieval castle into their palace). In order to manage their estate at Isola Sacra the Guglielmi built a large villa/farm south of Fiumicino, which today houses its Town Hall. 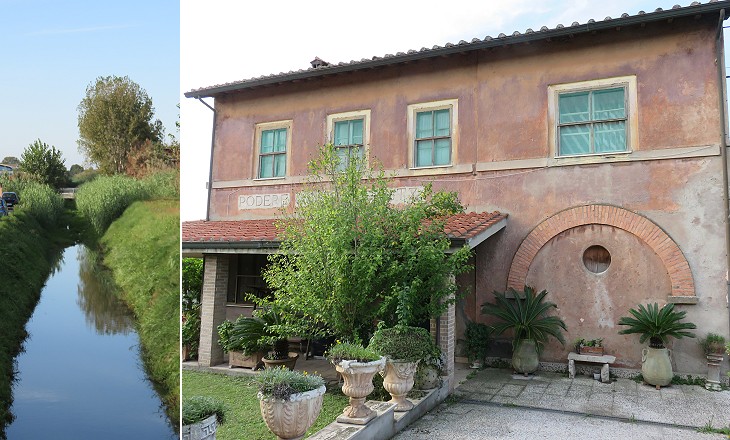 (left) Canale Traianello, a canal which was dug to drain the water from Isola Sacra; (right) a 1930s "podere" (small farm) near the Great Necropolis

In 1920 the Guglielmi were forced to sell most of their land at Isola Sacra to Opera Nazionale Combattenti, a national institution founded in 1917 which helped demobilized soldiers to find an occupation. A major effort was made to reclaim the marshes of Isola Sacra (and to incidentally uncover the necropolises of Porto). The reclamation led to the disappearance of Anopheles Atroparvus, the mosquito which was the vector of malaria, a disease caused by a parasite and not by breathing the air of the marshes. 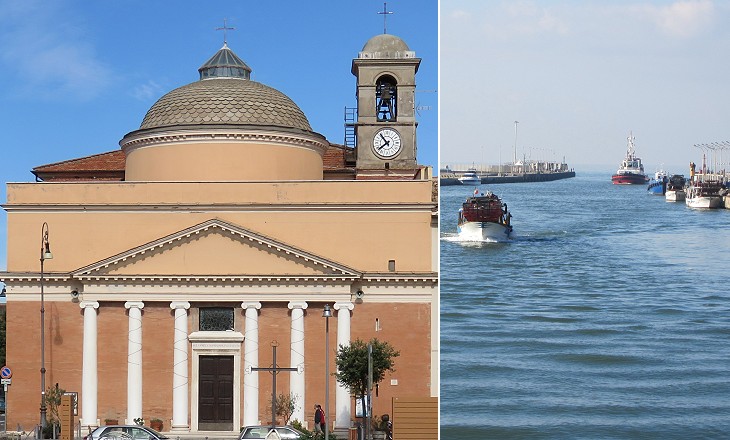 The name Fiumicino has become very popular with travellers because in the 1950s it was decided to build a new airport on the area north of the former Harbour of Claudius. Today some 100 fishing boats are active at Fiumicino to supply the local restaurants many of which cater for the businessmen arriving at the airport who enjoy great food at company expense.

Return to Ancient Porto or to the Great Necropolis of Porto.