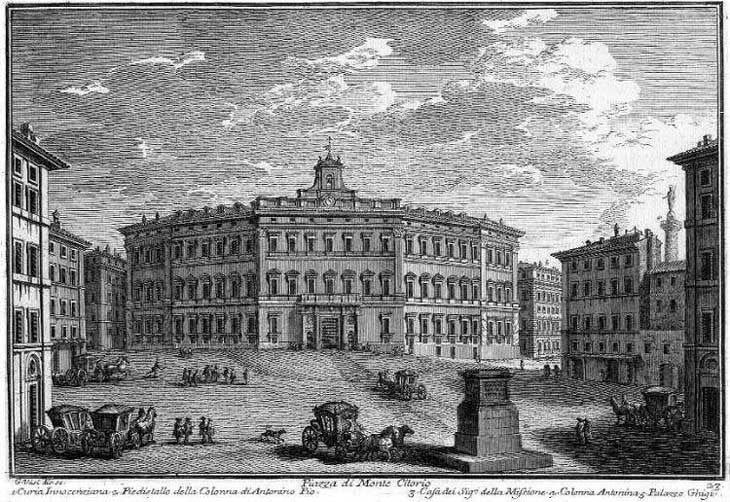 In 1752, when Giuseppe Vasi published this etching, Piazza di Montecitorio had just been embellished by Pope Benedict XIV with the decorated pedestal of a red granite column erected to celebrate Emperor Antoninus Pius and Annia Faustina, his wife. The pedestal and parts of the column were found in 1703 in the property of Casa dei Signori della Missione which was located in the north-western corner of the square. Giovanni Battista Piranesi, almost at the same time as Vasi, published an etching in which the size of the pedestal was greatly magnified (it opens in another window).
Monte Citorio was the name given to a small mound originating from the levelling of the nearby area where Emperor Augustus built Horologium Divi Augusti, a gigantic sundial. Mons Acceptorius (mountain fit for receiving) is thought to be the source of the current name, although others believe it derives from Mons Citatorius, because of the citations (orders to appear in a law court) which were hung on the pedestal of the column to Antoninus Pius.
The view is taken from the green dot in the 1748 map below. In the description below the plate Vasi made reference to: 1) Curia Innocenziana (Palazzo di Montecitorio); 2) pedestal of Colonna di Antonino Pio; 3) Casa dei Signori della Missione; 4) Colonna Antonina; 5) Palazzo Chigi. 4) and 5) are covered in other pages. 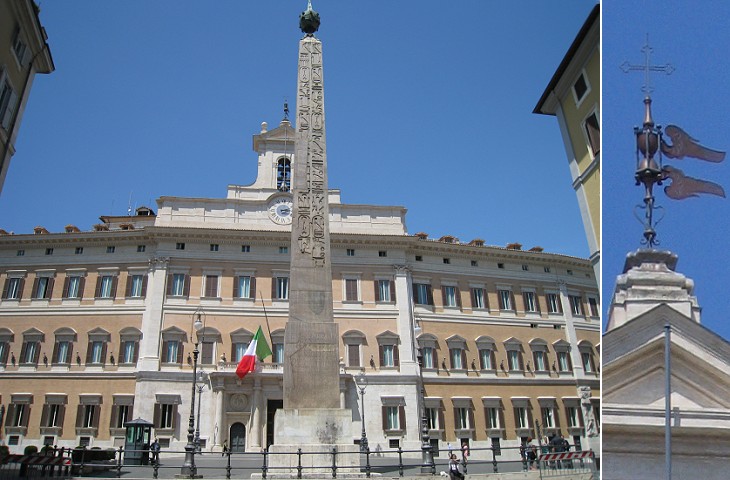 (left) The view in July 2009; (right) symbols of passing time at the top of the palace (see a page on Memento Mori - Representation of Death in Baroque Rome)

The façade of the palace is untouched although its interior was largely modified after 1871 to adapt it to the needs of Camera dei Deputati, the Lower House of the Italian Parliament. A new entrance was built on the back of the enlarged palace, but it is very rarely used.
The pedestal of the column was replaced in 1789 by the obelisk which served as the gnomon of Horologium Divi Augusti. The obelisk (broken and lacking some parts) was found in 1748 and during the pontificate of Pope Pius VI it was restored and placed in Piazza di Montecitorio. The pedestal was moved to Musei Vaticani. 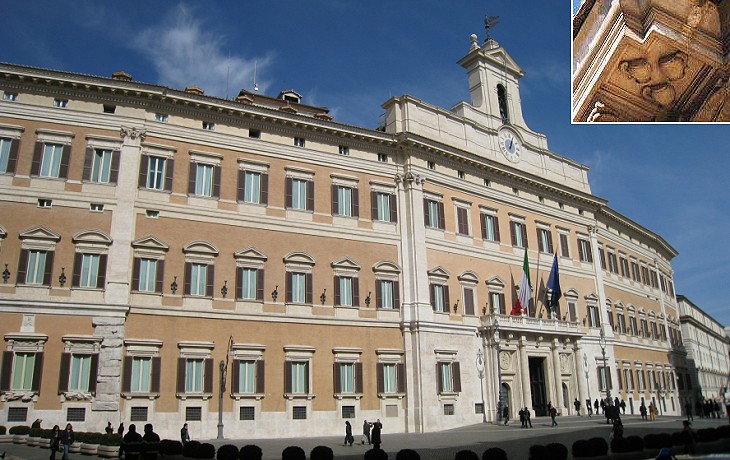 (left) View of the palace; (inset) heraldic symbols of Pope Innocent XII in the cornice

Palazzo di Montecitorio was designed by Gian Lorenzo Bernini in 1653 for Prince Niccolò Ludovisi and his wife Costanza Pamphilj di San Martino; the former was a nephew of Pope Gregory XV and the latter the niece of Pope Innocent X, the reigning pope.
Vasi calls the palace Curia Innocenziana because it was completed by Pope Innocent XII. Its design is remarkable for the convexity of the façade to which Piranesi dedicated one of his etchings (it opens in another window). Bernini decorated the smaller side wings with fake rocks, as he had done in Fontana dei Quattro Fiumi and other architects of his time did, e.g. Plautilla Bracci at Villa del Vascello. The construction of the palace was not completed owing to the death of Prince Ludovisi in 1664.
Palazzo di Montecitorio failed to attract the interest of XIXth century travellers: The Palace of the Monte Citorio (designed by Bernini) contains public offices connected with police, passports, &c. is all what Augustus J. C. Hare wrote about it in his 1875 Walks in Rome, a rather detailed guide to the monuments of Rome. 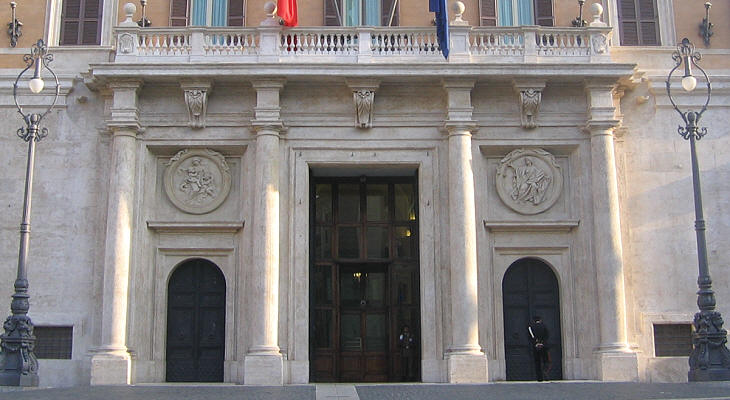 The unfinished palace was bought by Pope Innocent XII who asked Carlo Fontana to complete it and to adapt it to house tribunals and a hospice for the poor. The project by Bernini provided for a balcony supported by telamones, but Fontana chose a simpler design. The reliefs portray Charity (left) and Justice (right) and are a reference to the activities carried out in the building.
Starting in 1743 crowds gathered every two weeks in Piazza di Montecitorio to attend the lottery draw which took place on the balcony (see an etching made before 1789 - it opens in another window). Today small crowds often gather here to voice their views to the Members of Parliament.

The small map at the top of the page shows that Palazzo di Montecitorio had a very large courtyard which does not exist any longer. It housed a lengthy inscription which celebrated the completion of the building and a coat of arms of Pope Innocent XII. They have ended in an open air warehouse at the foot of the Aventine hill. 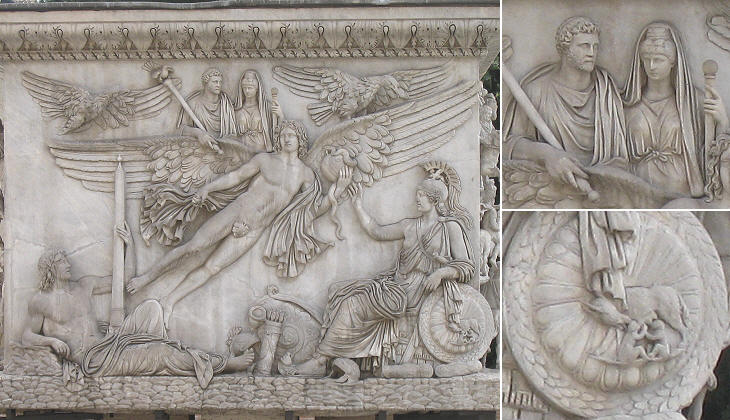 Relief at the base of the column: (left) the whole relief; (right-above) Emperor Antoninus Pius and his wife Annia Faustina; (right-below) the Roman she-wolf with Romulus and Remus

The relief at the base of the column was moved to the Vatican. For many years it was in Cortile della Pigna, now it is near the entrance, but in a location which is not along the suggested itineraries. The relief shows Thanatos, a personification of Death, leading the Emperor and his wife to Heaven. For the Greeks Thanatos was the twin brother of Hypnos (Sleep) and the two were often portrayed together; at the time of Emperor Antoninus Pius, the transition to death was regarded in a less dramatic way and in many sarcophagi Thanatos was represented as an angel. The lower part of the relief shows a personification of Campus Martius holding the obelisk of Horologium Divi Augusti and of Rome dressed as an Amazon, but with the Roman round shield. 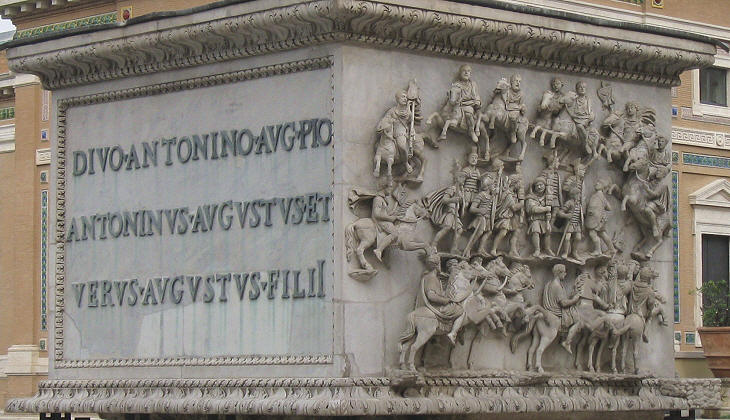 (left) Dedicatory inscription: to Emperor Antoninus Pius his sons Emperors (Marcus Aurelius) Antoninus and (Lucius) Verus; (right) "decursio funebris" funerary procession by soldiers surrounded by knights (it was almost copied in a IVth century sarcophagus found at Tor Pignattara); a detail of the relief is shown in the image used as background for this page 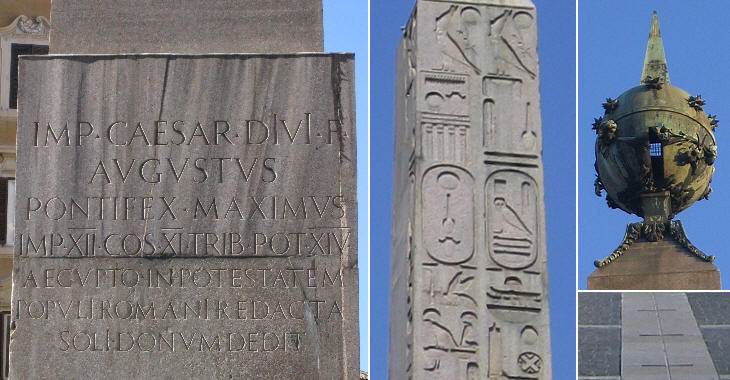 (left) 10 BC inscription celebrating the erection of the obelisk; (centre) detail of the hieroglyphs; (right) pierced globe decorated with the heraldic symbols of Pope Pius VI and markers on the pavement of the square

An obelisk erected by Pharaoh Psammetichus II (595-589 BC) in Heliopolis was brought to Rome by Emperor Augustus and used as the gnomon of a sundial. The inscription celebrates the conquest of Egypt: IMP(erator) CAESAR DIVI F(ilius) AUGUSTUS PONTIFEX MAXIMUS IMP(erator) XII (for the twelfth time) CO(n)S(ul) XI (for the eleventh time) TRIB(unus) POT(estatis) XIV (for the fourteenth time) A EGYPTO IN POTESTATEM POPULI ROMANI REDACTA SOLI DONUM DEDIT (Augustus, son of divine emperor Caesar, in his capacity as pontifex maximus, consul and tribune, brought - this obelix - from Egypt, - a country - he had placed under the rule of the Roman People. He dedicated this gift to the Sun). You may wish to see a page showing all the obelisks of Rome.
The obelisk was restored by using parts of the column dedicated to Antoninus Pius. Pope Pius VI decided to retain its original use and the bronze globe he placed at the top of the monument is pierced so that at noon a sun ray crosses it and indicates the day of the year on a series of markers on the pavement of the square. 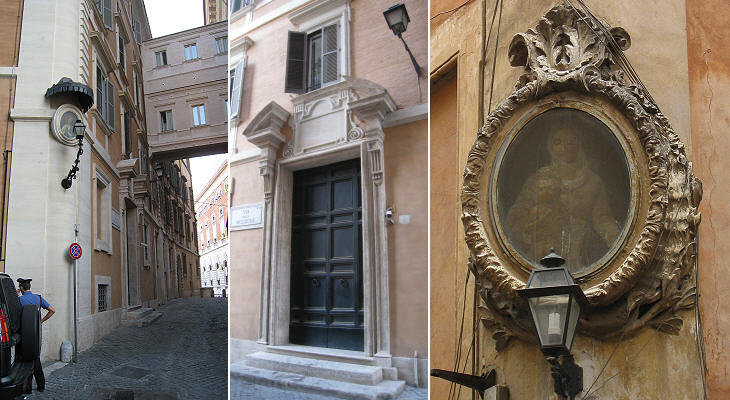 A large palace on the western side of Palazzo di Montecitorio is now occupied by offices supporting Camera dei Deputati and a bridge facilitates the passage between the two buildings. It housed the monastery of Signori della Missione, a congregation founded by St. Vincent de Paul. It s members are better known as Lazarists after the Priory of St. Lazarus in Paris where they first began their activities. It was built in 1642 and it included SS. Trinità delle Missioni, a church designed by Bernardo Della Torre in 1739-1743 and which is now deconsecrated. The offices of Camera dei Deputati include also S. Gregorio Nazianzeno and the adjoining courtyard.