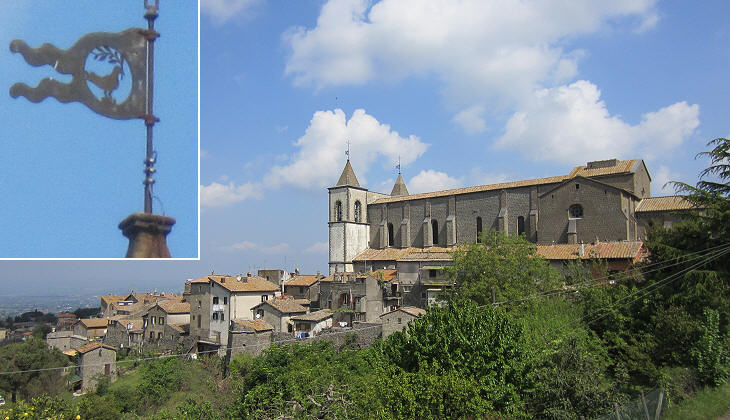 View of S. Martino al Cimino; (inset) detail of the bell tower weathervane showing a dove, the heraldic symbol of the Pamphilj

The Palazzo San Martino, which Murray would lead people to look for in Viterbo, is in reality four miles distant, on the declivity of the Ciminian Hills, whence there is a splendid view.
Augustus J. C. Hare - Days near Rome - 1875
S. Martino al Cimino, a few miles south of Viterbo, was a small medieval village around an abandoned Cistercian abbey when in 1645 Pope Innocent X donated it to Olimpia Maidalchini, the widow of his elder brother Pamphilio Pamphilj. 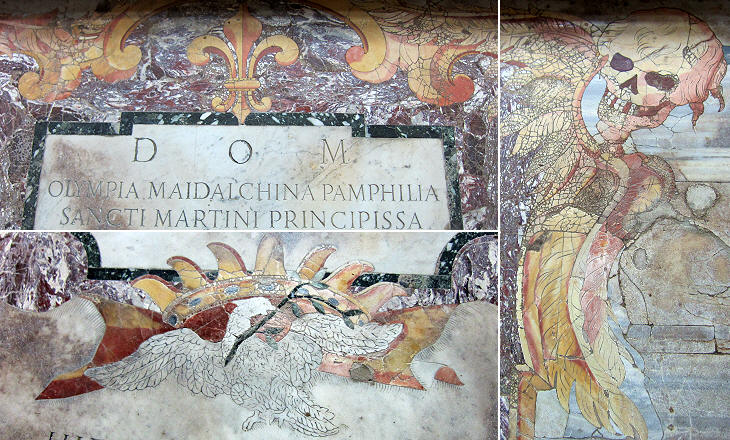 Details of the gravestone of Donna Olimpia Maidalchini in S. Martino

It is well worth visiting on account of its connection with Olympia Pamfili, the famous "papessa," sister-in-law of Innocent X. She was born at Viterbo in 1594, of the noble but ruined family of the Maidalchini, and was destined by her parents for a convent, but insisted upon marrying a Count Pamfili, nineteen years older than herself. The attraction to this alliance was the fact that her husband had a brother, over whom she obtained unbounded ascendancy, and who rose under her guidance to obtain a cardinal's hat in 1629, and the papal tiara in 1644. Hare
Olimpia Maidalchini was given the title of Princess of S. Martino and she promoted a radical renovation of the village; with the help of Roman architects she turned it into a small town which is regarded by art historians as an almost intact example of modern urban design. After the death of Pope Innocent X the princess chose to live in her fiefdom, rather than in her Roman palace in Piazza Navona.
Olimpia Maidalchini wanted to be buried in the church of the former abbey; the design of her gravestone reflects the fashion of the time for Memento Mori, symbols of Death. 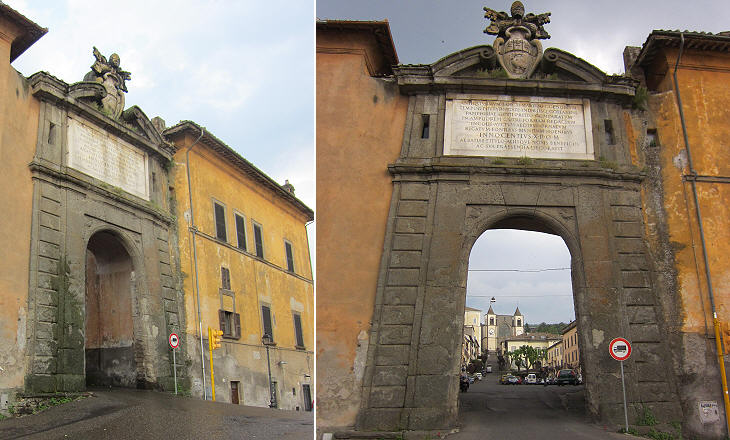 An imposing gate designed by Francesco Borromini gave access to the new town: the inscription detailed the improvements made by the Pamphilj family: the restoration of the church, the enlargement of the village, the construction of walls and fountains. 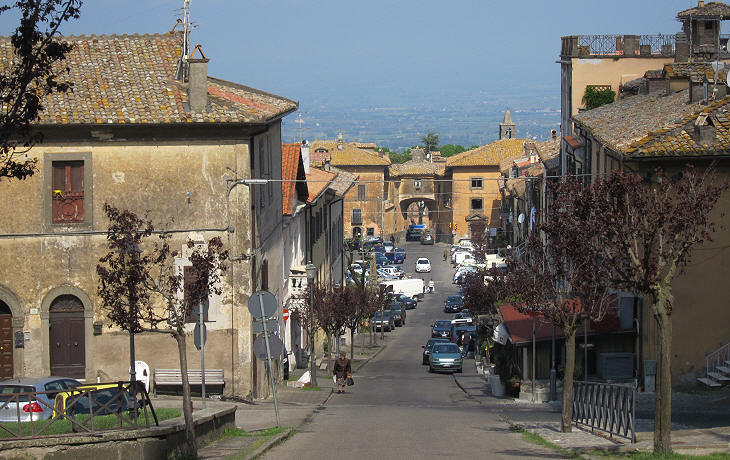 Main street leading to the Cathedral and the Pamphilj Palace

The design of the new town was commissioned to Marcantonio De Rossi, who was chiefly a military architect having designed the walls between Porta Portese and Porta S. Pancrazio and the two gates. 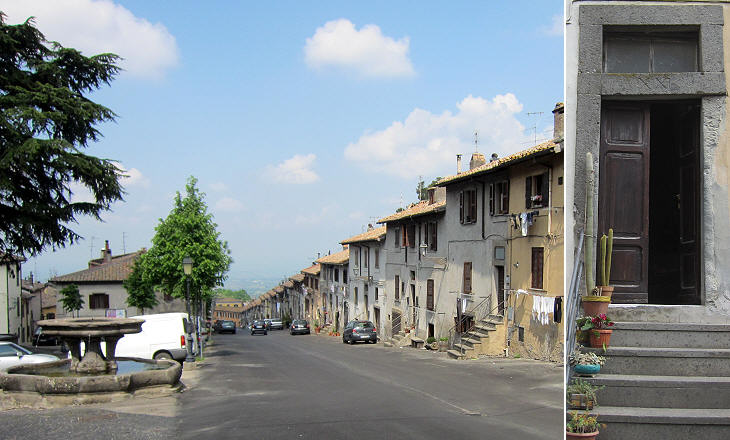 (left) Houses for the ordinary inhabitants; (right) door with the house number carved on the lintel

The houses built by De Rossi for the princess' subjects may seem today rather uninviting because of the repetitiveness of their design, but at the time of their construction they were regarded with envy by the inhabitants of the other small towns around Viterbo, who often lived in houses cut into the rock, such as those which can be seen at Blera and at Grotte di Castro. 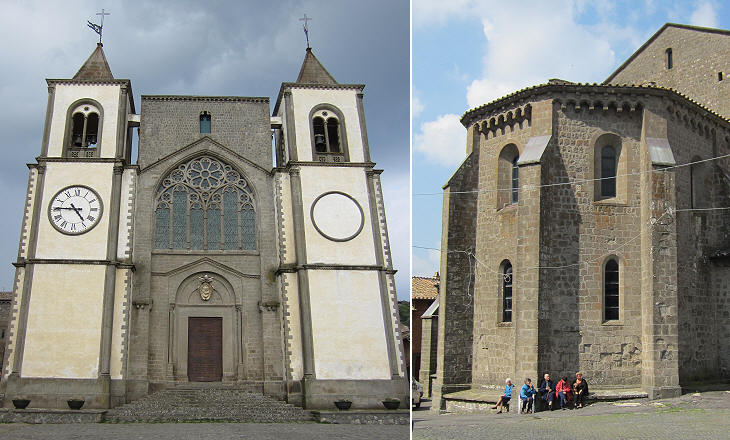 IXth century records indicate that a Benedictine monastery existed in the area of S. Martino, but the abbey and the church were built in the early XIIIth century by the Cistercian Order which originated from France, hence the dedication to St. Martin of Tours; the two bell towers were added in the XVIIth century; some sources attribute them to Borromini, other sources to De Rossi. 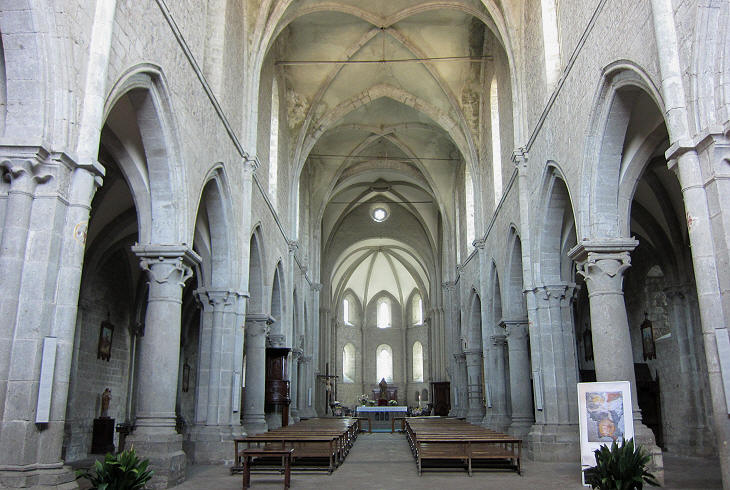 The interior maintains most of its original character, although its Gothic aspect is more evident in the side naves, one of which can be seen in the image used as background for this page. You may wish to see the interiors of the churches of Fossanova and Casamari, two Cistercian abbeys in Southern Latium. 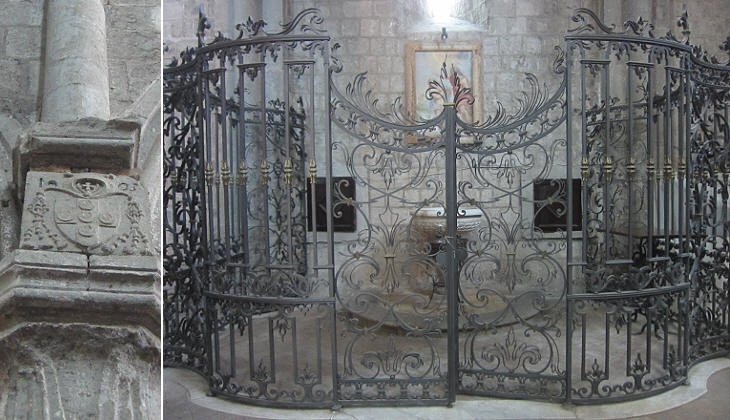 S. Martino: (left) coat of arms of Cardinal Francesco Todeschini Piccolomini who promoted a restoration of the church in 1503, shortly before becoming Pope Pius III; (right) railing surrounding the baptismal font, most likely designed by Gabriele Valvassori, the architect of the Pamphilj in the first half of the XVIIIth century (see a similar railing on the rear façade of Villa Aldobrandini)

After the death of Olimpia Maidalchini, the Pamphilj rarely visited their fiefdom and they made only minor additions to the church. 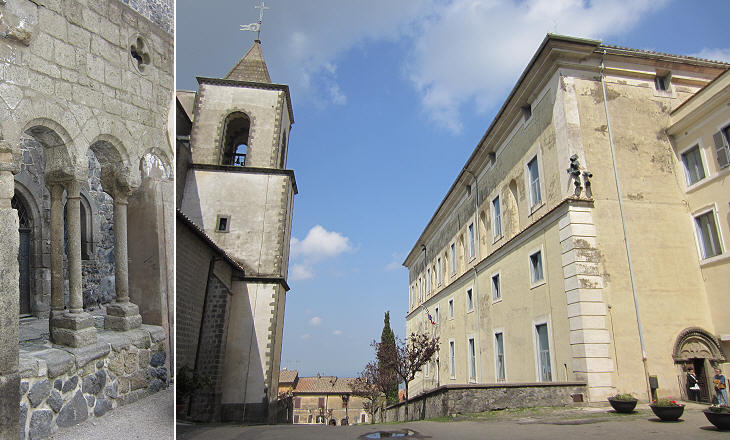 (left) A small section of the cloister of the Cistercian monastery; (right) Palazzo Pamphilj

In the XVth century the Cistercian Order almost abandoned S. Martino and eventually in 1564 the monastery was closed; while the church was restored by the Pamphilj, parts of the monastery and of its ancillary buildings were incorporated into a modern palace; a small section of the cloister can still be seen between the church and the palace. Marcantonio De Rossi designed an unusually void of decorations building for the princess; he even re-employed one of the old entrances of the monastery, although its design did not match that of the palace. 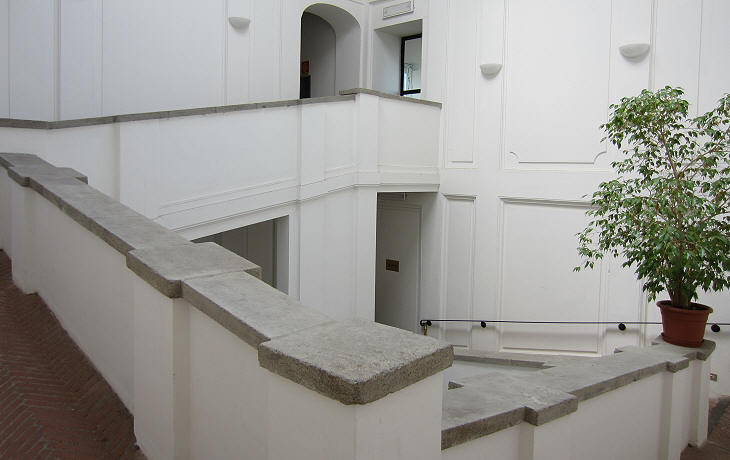 Many relics of their wicked ancestress are still preserved in the palace of the Dorias at San Martino, especially her portrait, and her bed with its leather hangings. Hare
De Rossi designed a very practical internal cordonata, a sloping road which allowed the princess to reach her apartments on a mule; by tradition the popes rode a mule on important occasions such as the procession to S. Giovanni in Laterano which followed their election; in general riding mules was not regarded as unsuited for people of high social standing. You may wish to see the "cordonata" at Casino del Belvedere in Rome and at Palazzo Farnese di Caprarola. 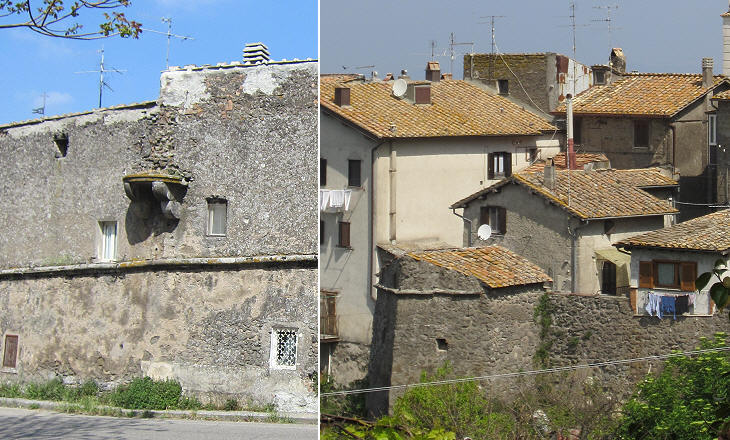 The walls of S. Martino were not meant for defence against an army, but just as a security measure against bands of brigands. In order to reduce costs De Rossi designed them so that they also served as walls of the houses (the windows were opened when defence needs subsided). 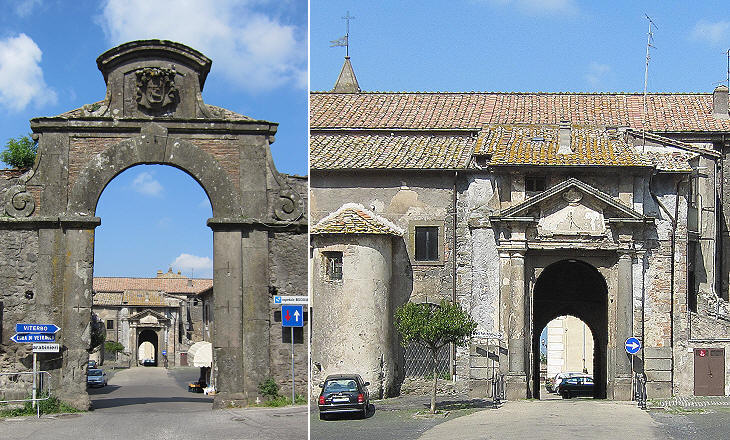 The design of the rear gate, which was mainly used by the Princess' farmers to go to work, is very similar to the portal of a villa, rather than to an urban gate; a second and more elaborate gate gave access to Palazzo Pamphilj. 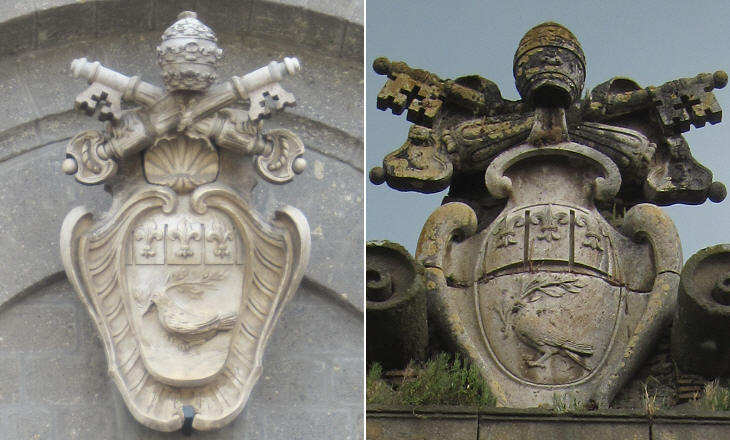