Links to this page can be found in Book 6, Day 5, View C8, Rione Pigna and Rione Sant'Angelo. 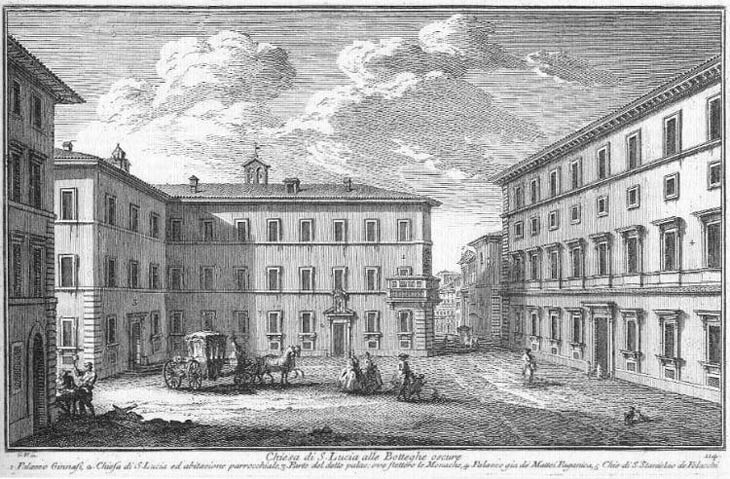 In 1756 Giuseppe Vasi published a book with 20 etchings showing the most interesting parish churches of Rome. This plate was perhaps initially sketched with the intention of being included in the 1754 book on the main palaces of Rome because the focus of the view is on two XVIth century palaces: Palazzo Ginnasi (left) and Palazzo Mattei Paganica Caetani (right). Vasi paid very little attention to the small entrance to S. Lucia alle Botteghe Oscure.
The view is taken from the green dot in the small 1748 map here below. In the description below the plate Vasi made reference to: 1) Palazzo Ginnasi; 2) S. Lucia; 3) Part of Palazzo Ginnasi once used by the nuns; 4) Palazzo Mattei Paganica, then Caetani; 5) S. Stefano dei Polacchi. The small map shows also: 6) the site where columns of Porticus Minuciae were unearthed; 7) the building inside which a portico adjoining Teatro di Balbo was identified; 8) Torre del Papitto. The dotted line in the map delineates the border between Rione Pigna (above) and Rione Sant'Angelo (below). 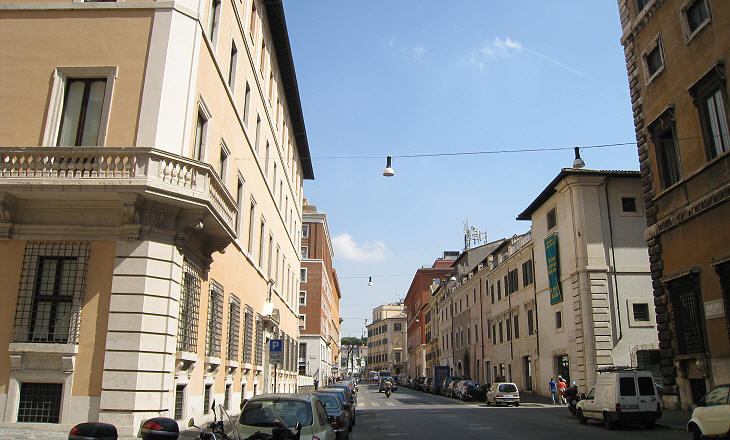 The view in April 2009. The second building on the right side of the street houses Museo Nazionale Romano at Cripta di Balbo

The buildings on the left/northern side of the street were pulled down in 1935 to facilitate the access to Monumento a Vittorio Emanuele II. The nunnery was replaced by a new building which in some aspects resembles the old one. The balcony on its corner brings to mind that which is shown in the plate. The small entrance to the church was moved to the centre of the new building. The right side of the street was not modified with the exception of the buildings at its end which were demolished/modified due to the opening of Via del Mare. 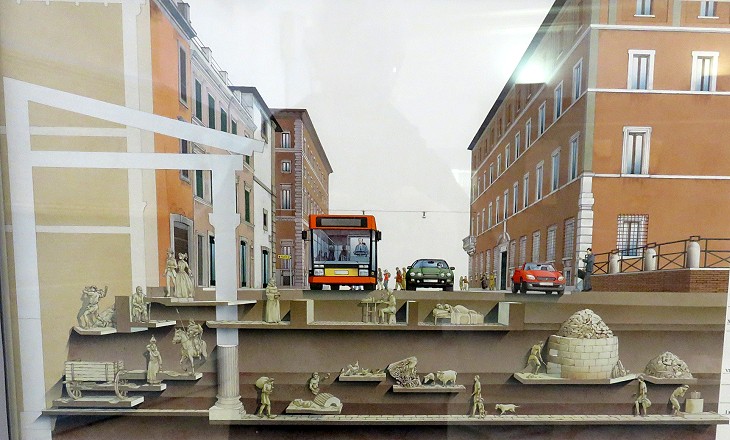 Museo Nazionale Romano at Cripta di Balbo: Panel showing the ground levels beneath Via delle Botteghe Oscure (seen from the other end of the street). The panel shows also the presumable size of a portico adjoining Teatro di Balbo (on the left) and the "calcararia", the kilns where the marbles of ancient buildings were burned to make mortar (on the right)

The street is named after a series of arches of ancient Roman buildings which were reused in medieval times for some small shops (It. bottega). They received light only from the entrance; for this reason they were called oscure (poorly lighted). They were eventually incorporated inside later buildings.
The excavations made to enlarge the street have allowed the identification of its levels through the centuries. That of Ancient Rome is some twenty feet below the current one. 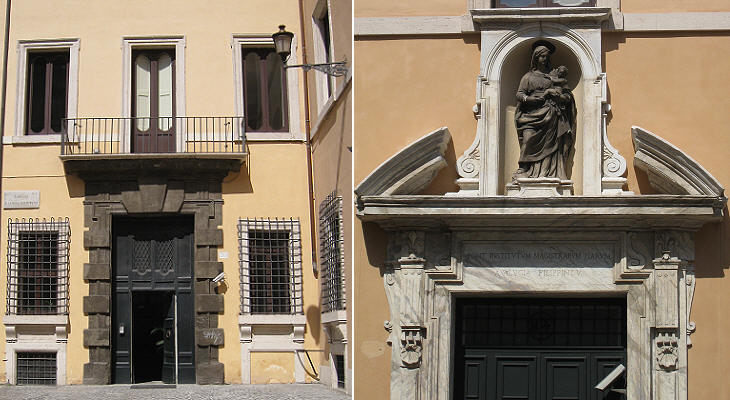 A part of the nunnery with a 1585 portal by Ottavio Mascherino was not affected by the enlargement of the street. The official name of the church was S. Lucia dei Ginnasi because it was built in 1630 by the Ginnasi on the site of a XIIth century church previously known as S. Lucia de Calcararia. Although being a parish church it basically was a church of the Ginnasi who had their tombs there. The paintings which decorated it were works by Sister Caterina Ginnasi. 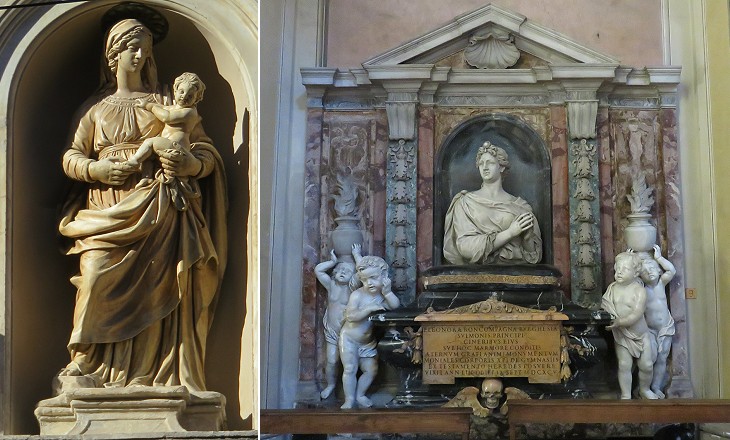 The Ginnasi moved their funerary monuments from S. Lucia to a chapel inside their new palace. The only tomb which was not related to a Ginnasi was moved to another church. Eleonora Boncompagni Borghese expressly stated in her 1695 will that she wanted to be buried in this small church, rather than in the crypt of the family chapel at S. Maria Maggiore. 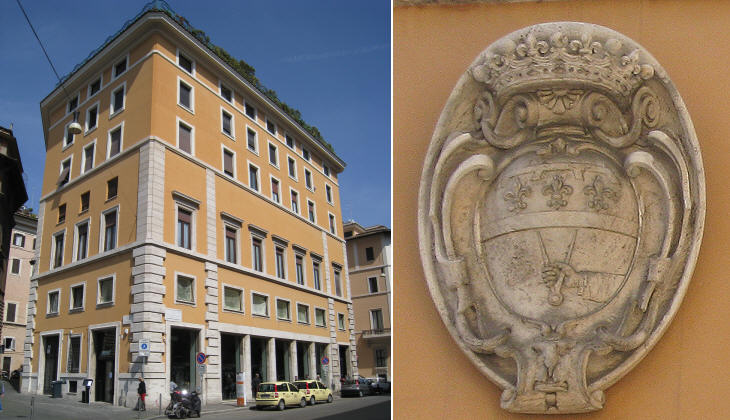 (left) Modern Palazzo Ginnasi; (right) coat of arms which once stood on the façade of the old palace

The Ginnasi became a prominent Roman family at the beginning of the XVIIth century when Domenico Ginnasi was appointed cardinal by Pope Clement VIII. Their palace was designed by Ottavo Mascherino in the late XVIth century. 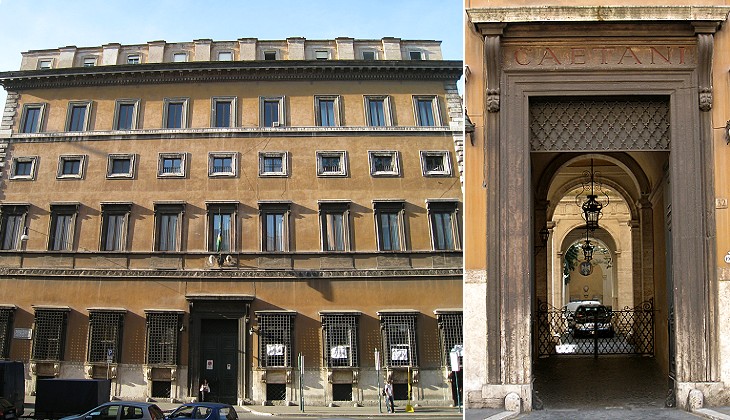 This late XVIth century palace is called Palazzo Mattei Paganica by Vasi; the Mattei had several properties in this neighbourhood (including another Palazzo Mattei Paganica) and this palace was linked with Palazzo Mattei di Giove. It was bought in 1776 by Francesco Caetani, a distant heir of Pope Boniface VIII who placed the family name above the main entrance of the building. It was thought to have been designed by Bartolomeo Ammannati, but it is now attributed to either Claudio or Annibale Lippi. Its design is similar to Palazzo Ruspoli and Palazzo Sacchetti. 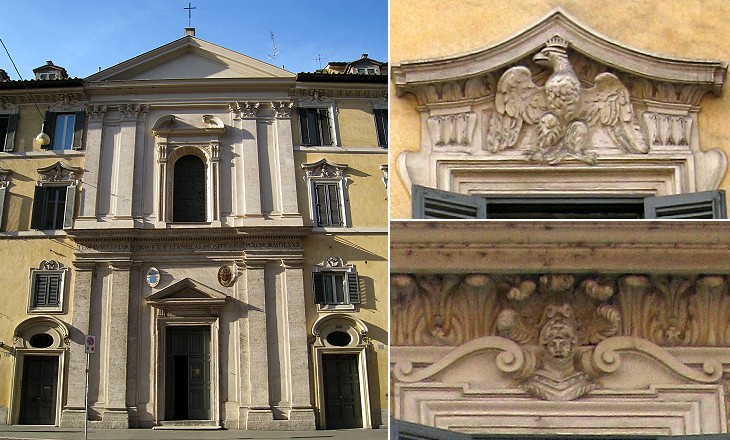 S. Stanislao is today the Sunday meeting point of the large Polish community of Rome. The windows of the attached hospital/hostel are decorated with a crowned eagle, the symbol of Poland and with the head of a knight. The image used as background for this page shows a crowned eagle (click here for a list of national churches in Rome).
In 1578 the church was given by Pope Gregory XIII to Cardinal Stansislaus Hosius who financed the construction of a hospital and a hostel for Polish pilgrims. In 1729-1735 the whole complex was largely modified by Francesco Ferrari who decorated its windows with very elaborate stuccoes. 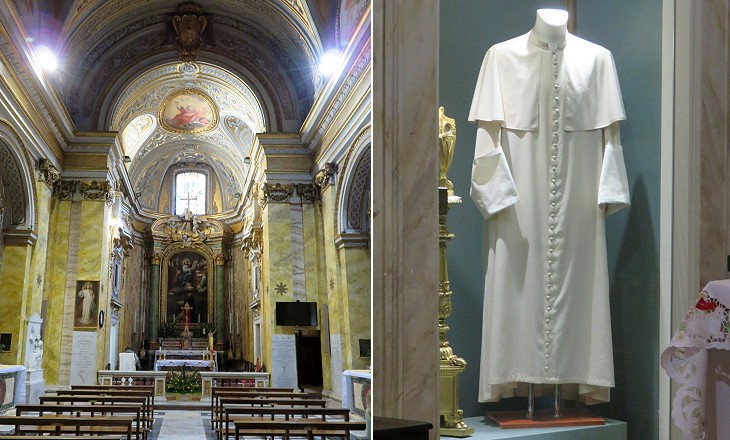 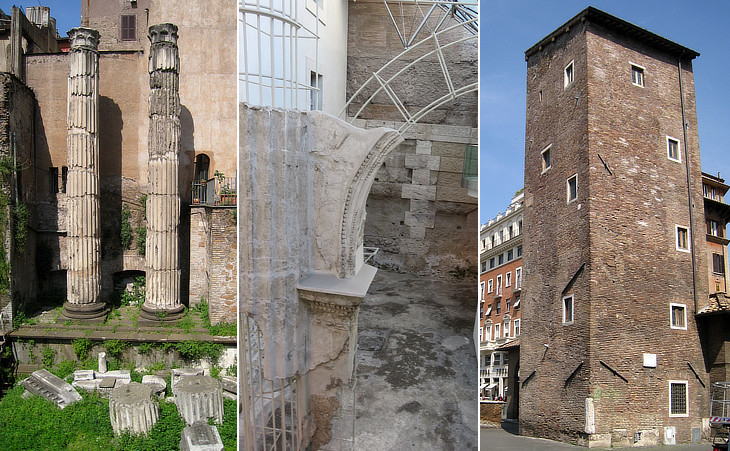 For a long time the walls of ancient Roman monuments which were incorporated into later buildings of Via delle Botteghe Oscure were thought to be those of a large circus (Circus Flaminius). The 1930s excavations aimed at enlarging the street and more recent studies led to establishing that the northern side of the street was previously occupied by Porticus Minuciae and the southern one by Teatro di Balbo.
Porticus Minuciae was a large courtyard surrounded by low buildings which was used for the elargitiones, distribution of key commodities free of charge; two columns of a temple which stood at its centre have been re-erected.
Teatro di Balbo was built in 13 BC by Lucius Cornelius Balbus Minor: the walls of an adjoining portico (Cripta) were eventually included in a monastery behind S. Caterina dei Funari (see also the historical section). Lucius Cornelius Balbus is best known for having defeated the Garamantes in 19 BC. This tribe threatened the development of the Roman settlements in Tripolitania.
In 1929 excavations identified other nearby Roman buildings in the site of S. Nicola dei Cesarini. They eventually isolated a medieval tower which stands at the beginning of Via delle Botteghe Oscure. It is known as Torre del Papitto or Torre Persiani. Papitto (small pope) is most likely a reference to Anacletus II, antipope in 1130-1138, a member of the Pierleoni family.