Porta S. Paolo
(Vasi at work in the Grand View of Rome) 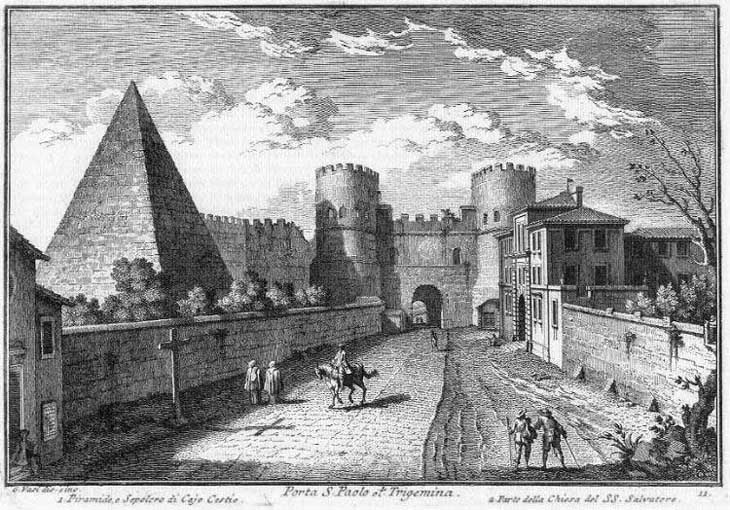 This etching which Giuseppe Vasi included in his 1747 first book of views of ancient and modern Rome is indicative of the dual "market" he was targeting. The ancient gate and even more the pyramid were subjects which appealed to travellers who visited Rome to admire its monuments, but Vasi wanted to sell his books also to the pilgrims who came to Rome to worship the relics of Apostles and martyrs. This explains why in the foreground of this etching he depicted the entrance to a small chapel, a large cross and some hooded pilgrims on their way back from Basilica di S. Paolo fuori le mura. A few years later Giovanni Battista Piranesi, a competitor of Vasi, gave much greater emphasis to the pyramid (it opens in another window). His etching had an influence on Vasi who in 1771 showed the pyramid from the same point of view and, similar to Piranesi, increased its size versus that of the gate.
The view is taken from the green dot in the small 1748 map here below. In the description below the plate Vasi made reference to: 1) Piramide di Caio Cestio; 2) Part of the church of S. Salvatore de Porta. The small map shows also: 3) Porta S. Paolo; 4) the approximate site of Fabbrica delle Polveri which was completed in 1752. 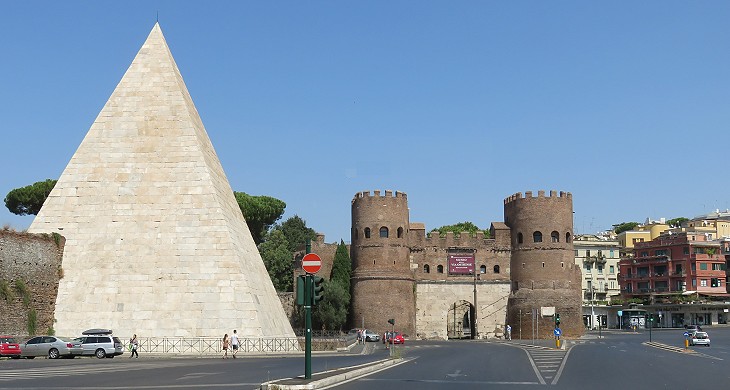 The view in August 2016 (the pyramid was cleaned in 2015 you may wish to see the previous 2007 image - it opens in another window; the neighbourhood on the far right is San Saba)

The plate shows one of the most amazing monuments of ancient Rome: the pyramid built in 13 BC by a wealthy Roman to house his burial chamber; with the nearby gate it forms a complex which seems to have been designed on purpose. Actually the gate was built three hundred years later by Emperor Aurelian. The original name of the gate was Porta Ostiensis because it was the starting point of the road which led to ancient Ostia.
At Vasi's time the importance of the gate was rather limited as it was mainly used by pilgrims to reach Basilica di S. Paolo. In 1920 the area south of the walls was chosen for the development of Borgata Giardino, a new quarter which is now known as la Garbatella. In the following years the coastline near ancient Ostia was turned into Lido di Ostia, the beach of Rome; an electric railway linked the new neighbourhood to a station immediately outside Porta S. Paolo. In order to allow cars and buses to move between this new quarter and the city a large section of the walls to the right of the gate was pulled down; after WWII also the walls between the gate and the pyramid were demolished.
The small church shown in the plate was pulled down in 1849 during Garibaldi's Defence of the Roman Republic in order to clear the area in front of the walls from all obstructions. 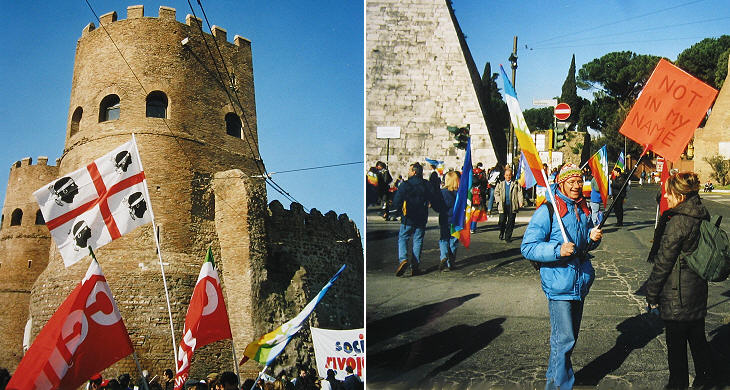 Images from a rally in February 2003

Today Porta S. Paolo is at the centre of a very large square and it is close to a railway station, to the underground, to the tramway Circle Line and to the railway to Lido di Ostia; these transportation facilities make the square an easy to reach gathering point for political rallies. You may wish to learn more on how and where the Romans voice their views. 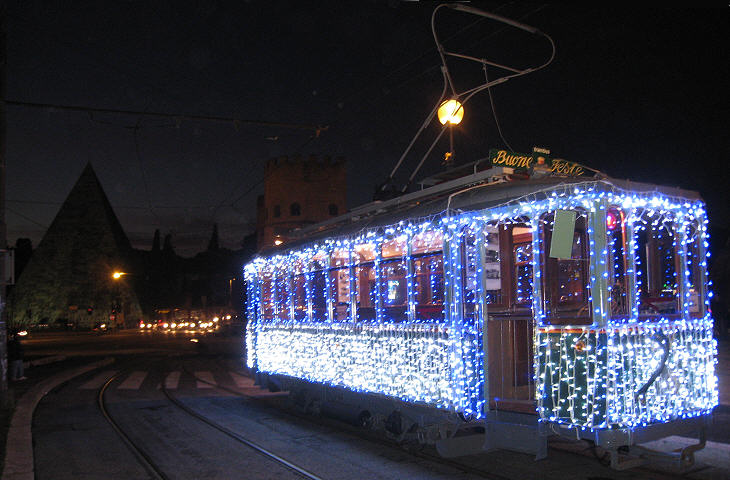 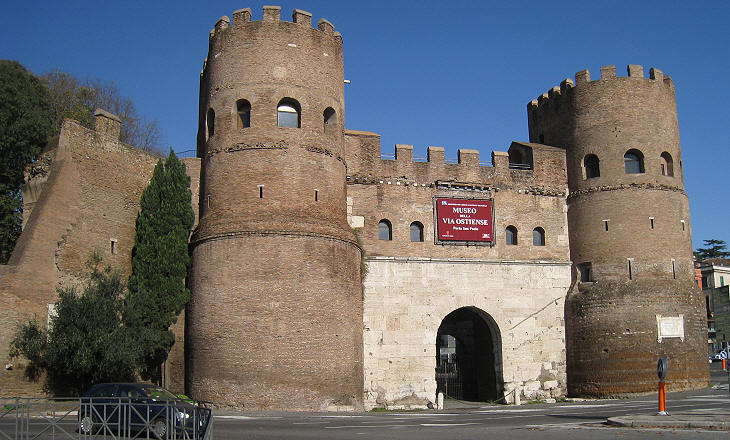 The gate is very similar to Porta S. Sebastiano. Initially it had two openings; in ca 310 Maxentius built a wall behind the gate with two other openings and strengthened the base of the towers by using opus listatum; Emperor Honorius replaced the two front passages with a central one, thus the gate started to be called Trigemina (three born at the same time) because overall it had three openings. In the VIth century Byzantine General Belisarius raised the towers to their current height (you can see them also in the image used as background for this page).
The interior of the gate can be seen in another smaller plate by Vasi. 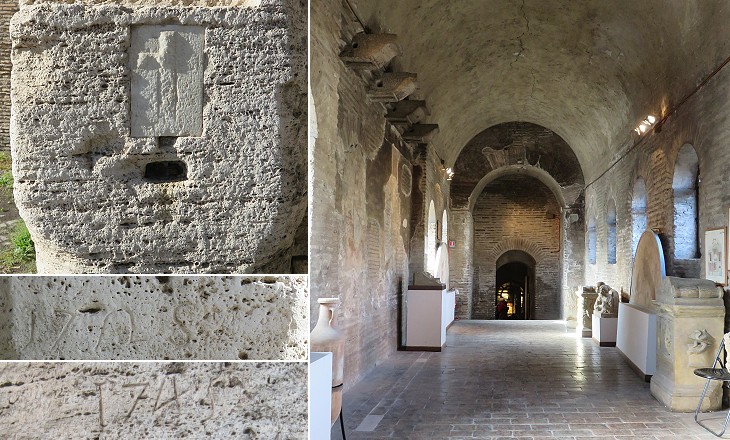 (left) A cross and inscriptions made in the years 1705 and 1743; (right) gallery above the entrance

Massive walls and high towers are of no avail when those who should defend them accept bribes; in 551 the Ostrogoths bribed the Isaurian garrison of this gate and they conquered Rome. The guards were recruited among the shepherds/brigands who lived in the Taurus Mountains in Anatolia and were regarded as valiant and trusted soldiers by the Byzantine emperors for whom they formed the personal guard.
Today Porta S. Paolo houses Museo della Via Ostiense, a small museum about the gate itself and Via Ostiense. It contains a model of ancient Ostia and one of Porto. Exhibits from the museum which were found along Via Ostiense: (left-above) Funerary relief of the Decii, a family of freed slaves. Husband and wife clasp their right hands, a gesture ("dextrarum iunctio") they did on their wedding day, while their young son stands between them holding a dove (early IInd century AD - original at Museo Nazionale Romano); (left-below) "Libello di Eutichete" an inscription dated 227 AD which was found in 1887. It reports a request by Eutichete, a farmer, to be allowed to build a small monument on his property and the affirmative reply he received; (right) frescoes depicting peacocks from tombs 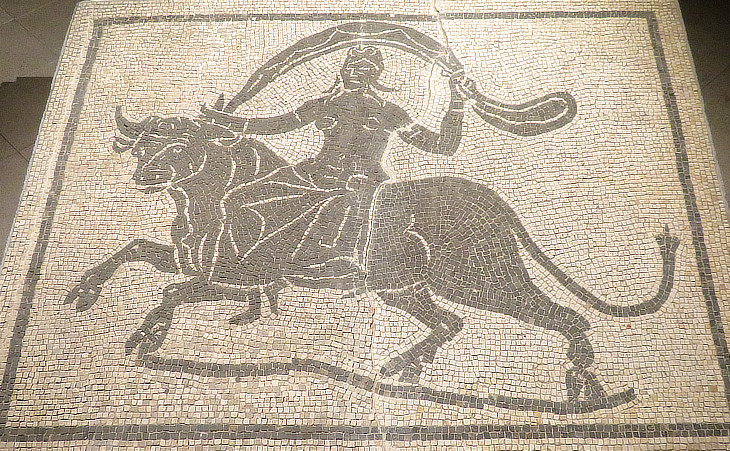 Centrale Montemartini: floor mosaic (late IInd early IIIrd century) from a tomb near Porta S. Paolo which was found in 1936; it depicts the Rape of Europa, a popular subject, but unusual for a tomb (see some polychrome mosaics in Algeria) 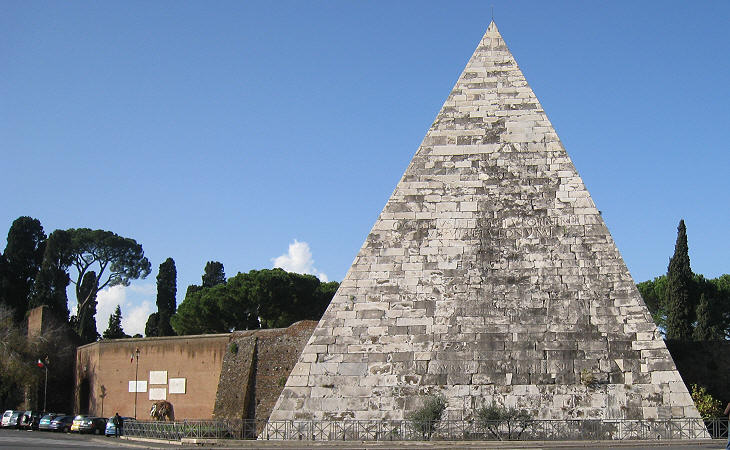 The sepulcher of Caius Cestius is most ancient, rising in a pyramis, and the inscription shewes it was built in three hundred and thirty daies, which the common sort falsly thinkes to be the Monument of Romulus. This monument of stone is compassed with wals, and it hath an inscription in great letters, but raced out.
Fynes Moryson - An Itinerary: Containing His Ten Years Travel Through .. Italy (in 1594)
We drove to the Pyramid of Caius Cestus. As we know nothing of this Caius Cestus, but that he lived, died, and was buried, it is not possible to attach any fanciful or classical interest to his tomb, but it is an object of so much beauty in itself, and from its situation so striking and picturesque, that it needs no additional interest. It is close to the ancient walls of Rome, which stretch on either side as far as the eye can reach in huge and broken masses of brick-work, fragments of battlements and buttresses, overgrown in many parts with shrubs, and even trees.
Anna Jameson - Diary of an Ennuyée - 1826
At the end of the civil war between Octavian and Antony, Egypt became a province of the Empire. Many Romans were fascinated by some aspects of the Egyptian culture; the most evident sign of this fashion is the number of obelisks which were brought to Rome.
Caius Cestius, a very wealthy Roman, chose for his tomb a pyramidal shape rather than the traditional circular one (see Tomba di Cecilia Metella, which was built at approximately the same time); we know that he had been praetor (an annually elected magistrate), tribune of the people and epulonum, a member of a group of seven priests who supervised the solemn sacrificial banquets; he was a brother of the Cestius who built a bridge at Isola Tiberina and he was a friend of Marcus Vipsanius Agrippa, son-in-law of Emperor Augustus. An inscription found in the burial chamber inside the pyramid quotes Agrippa among the living friends of Caius Cestius; because Agrippa died in 12 BC, the construction of the pyramid is set before that year. An inscription on the pyramid says that it was completed in 330 days. You may wish to see the imposing mausoleum built at Gaeta by L. Munatius Plancus, another epulonum of that period.
In 275 AD when the walls were built the pyramid was considered a sort of useful tower and it became part of the curtain; this fact saved it because it was maintained and not deprived of its Lunense (from Carrara) marble facing. 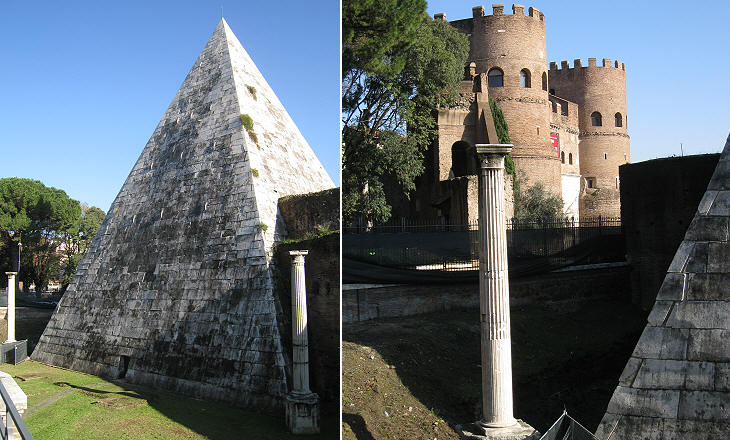 (left) The pyramid seen from the Protestant Cemetery; (right) one of the four columns which were placed around the pyramid: two of them supported bronze statues of Caio Cestio

In 1656-1663 Pope Alexander VII restored the marble facing of the monument and reconstructed its tip (you may wish to see it before its restoration in a very evocative painting by Giovanni Ghisolfi - ca 1650 - it opens in another window). The excavations led to finding two columns and the bases of two other columns. A narrow passage was dug to reach the burial chamber which was found empty (it opens in another window); it is decorated with grotesques and it can be visited by small groups, but photographing is not allowed. The 1663 restoration of the pagan monument was the first made by a Pope without a religious motivation.
Notwithstanding the fact that a large inscription mentioned the name of Caius Cestius, during the Middle Ages the pyramid was thought to be the tomb of Remus, the twin brother of Romulus, the founder of Rome and it was called Meta Remi (another pyramid near what is today Via della Conciliazione was called Meta Romuli, but its ruins were demolished at the time of Pope Alexander VI). It is likely that some of the funerary monuments along Via Appia and a large tomb at Autun had a pyramidal shape. 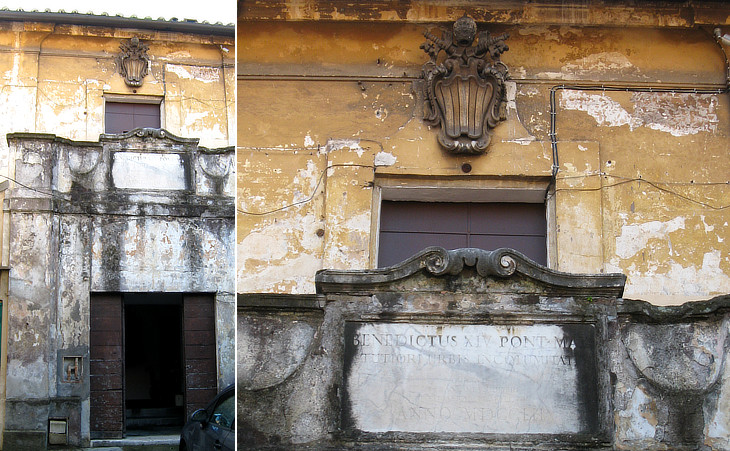 (left) Old entrance to the building; (right) 1752 inscription and coat of arms of Pope Benedict XIV

Vasi had a special devotion for Pope Benedict XIV (he was not the only one, because the Pope was very popular for his simple manners and understanding of daily life issues). This explains why in his 1761 guide to Rome Vasi mentioned almost all the initiatives taken by him.
Fabbrica delle Polveri means gunpowder factory. Pope Benedict XIV built a small magazine near Porta S. Paolo. Its location was inside the walls, but in an almost unpopulated area (previously it was situated near S. Bonaventura al Palatino). Today low houses surround the original entrance to the magazine which is decorated with the coat of arms of the Pope and a celebratory inscription. It was eventually used as a military prison and it still belongs to the Army.
Fabbrica delle Polveri is depicted in one of the rooms of the Vatican Library in a series of paintings celebrating the improvements made to the City of Rome by the Pope.

The Walls from Porta S. Paolo to the River Tiber and the Protestant Cemetery 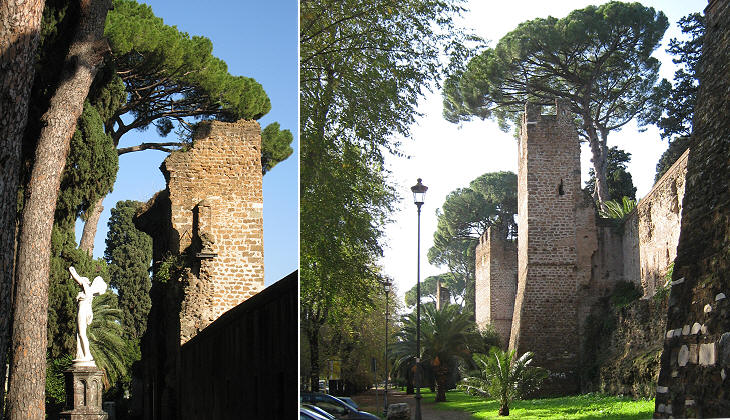 John Keats died at Rome of a consumption, in his twenty-fourth year, on the 27th of December 1821; and was buried in the romantic and lonely cemetery of the protestants in that city, under the pyramid which is the tomb of Cestius, and the massy walls and towers, now mouldering and desolate, which formed the circuit of ancient Rome. The cemetery is an open space among the ruins covered in winter with violets and daisies. It might make one in love with death, to think that one should be buried in so sweet a place.
Percy Bysshe Shelley - Preface to Adonais. An Elegy on the Death of John Keats.
Read Henry James' account of his visit to this Cemetery in 1873.
Read William Dean Howells' account of his visit to this Cemetery in 1908. 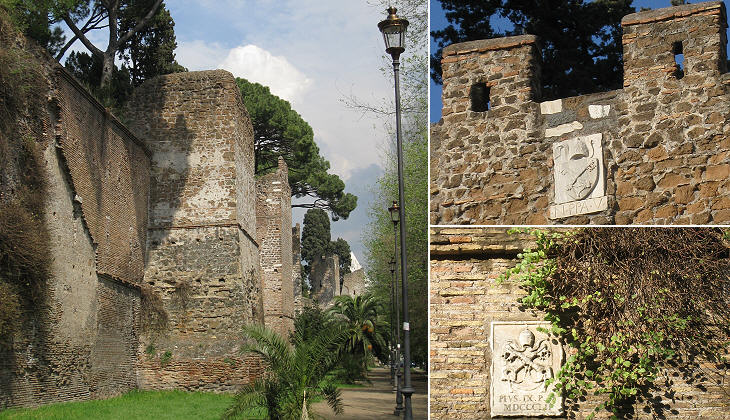 For centuries a cattle market (Campo Vaccino) was held in the Roman Forum; in 1803 Pope Pius VII relocated it outside Porta S. Paolo and the street along the walls is named after this market (Via del Foro Boario - It. bue=ox). The trees of the Protestant Cemetery make this stretch of walls very charming.
Vasi showed it in another plate.