In 1648 the Peace of Westphalia brought to a close the Wars of Religion which had followed the posting by Martin Luther of his theses on the church door at Wittenberg in 1517. The treaty clauses were far from establishing religious freedom, but nevertheless they led to some acceptance of the different religious professions. 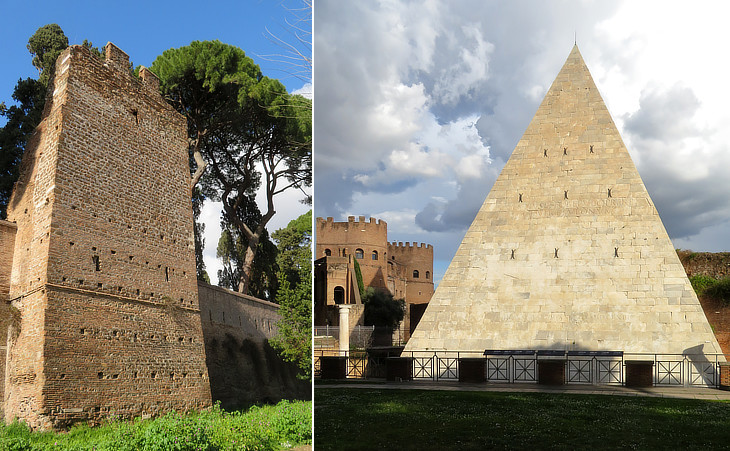 In the early XVIIIth century a number of foreigners of different Protestant faiths settled in Rome. Although the small community was regarded with some suspicion it was given a burial ground near Piramide di Caio Cestio. The site chosen was not very far from Ortaccio degli Ebrei (the Jewish Cemetery) in a part of Rome which, although located within the ancient walls, was actually a sort of urban countryside, remote from the city centre. 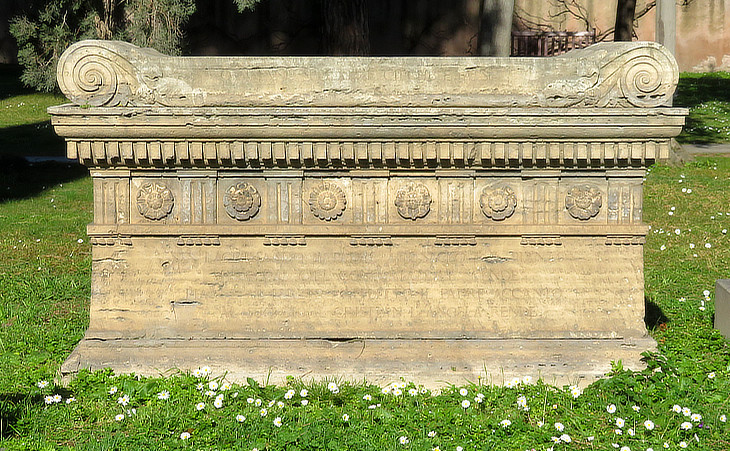 Monument to Anne Elizabeth Synnot, daughter of Sir Walter of Ballymoyer, who died in 1821, aged 13, in the oldest part of the cemetery; it is a copy of the sarcophagus of Lucius Cornelius Scipio Barbatus, which was found in 1780 and immediately became one of the most interesting exhibits of Museo Pio-Clementino

We attended the burial of an acquaintance of Mountstuart, George Anthony Werpup, a Hanoverian baron who had been killed when his carriage overturned. He was buried in the Protestant cemetery at night, because the prejudice against Protestants was so strong that the authorities refused to allow daytime interments there. Mountstuart erected a monument (the first in the cemetery) to him, with a long Latin inscription.
From James Boswell's letters on the Grand Tour related to his visit to Rome in 1765.
Restrictions were imposed on the funerals which could only occur at night and with very little publicity. In the last years of the XVIIIth century the burial ground became very popular among the foreigners visiting Rome: the Pyramid, the ancient walls, the simplicity of the site all appealed to the educated traveller who had knowledge of Gray's Elegy written in a country churchyard and of Macpherson's Poems of Ossian.
In February 1788, in the last days of his Italian journey, J. W. Goethe wrote: Should I be laid to rest beside the Pyramid of Cestius, these two poems ("Hans Sachs" and "Mieding's Death") will serve as my dying confession and my funeral oration. Given that at the time Goethe was in good health and in high spirits the sentence shows how much he liked the site of the burial ground. 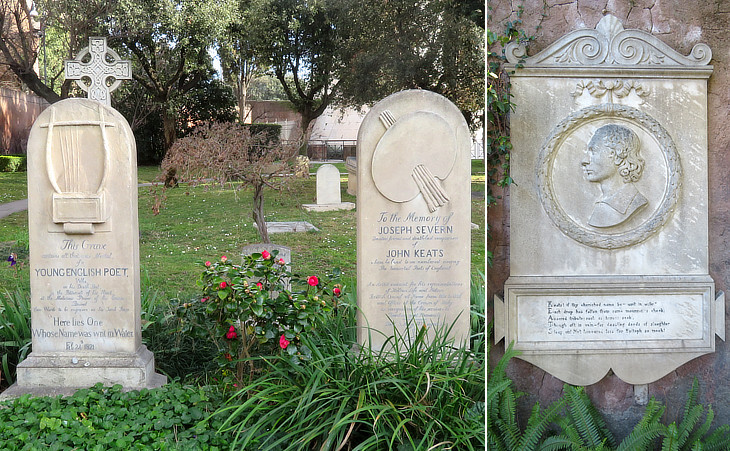 (left) Tombs of John Keats and of his friend Joseph Severn; (right) a relief portraying Keats

In the early XIXth century the cemetery was enlarged and a new wall completed the protection given by the ancient ones. The oldest part of the cemetery is close to the Pyramid and here John Keats lies in an unnamed monument: Here lies One Whose Name was writ in Water is the epitaph he dictated to his friend Joseph Severn, a painter who wanted to be buried next to him. A relief portraying Keats is accompanied by verses, the acronym of which reads K-E-A-T-S.
K-eats! if thy cherished name be "writ in water"
E-ach drop has fallen from some mourner's cheek;
A-sacred tribute; such as heroes seek,
T-hough oft in vain - for dazzling deeds of slaughter
S-leep on! Not honoured less for Epitaph so meek! 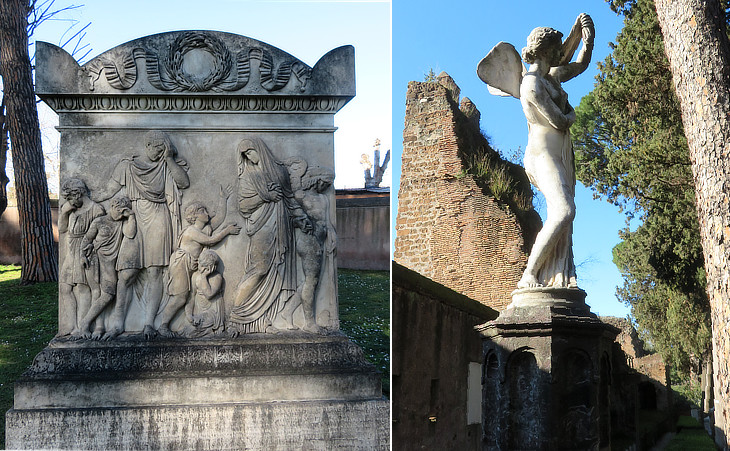 (left) Monument to Lady Elisa Watson (1770-1809) wife of Sir Grenville Temple, first monument with a figurative relief; (right) statue of Psyche on the tomb of Richard Saltonstall Greenough (1819-1904), an American sculptor, in the enlargement of the cemetery

Although most graves are very simple, a few are rather monumental and especially those of the early XIXth century have fine Neoclassic reliefs: that above shows a relief portraying the Angel of Death bringing away the dead woman who is mourned by her husband and children: all dressed as ancient Romans. The relief is signed "C. Gothe fecit Romae MDCCCX", probably a scholar of Bertel Thorwaldsen, the Danish sculptor who lived and worked in Rome for 40 years (1797-1837).
The statue portraying Psyche, a symbol of the soul, is a tribute by Richard Greenough to his wife Sarah Dana Loring who died before him and was buried in Austria. 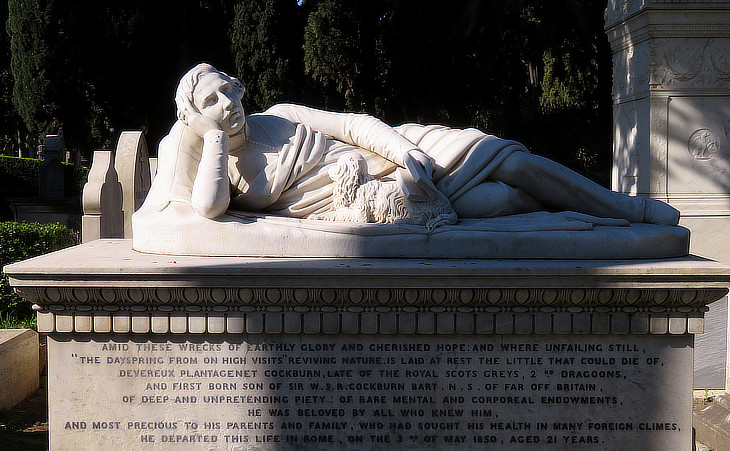 John Keats was not the only foreigner who came to Rome hoping the Italian sun would restore his health. Devereux Plantagenet Cockburn was portrayed with his dog and wrapped in a blanket. He "was beloved by all who knew him, and most precious to his parents and family, who had sought his health in many foreign climes. He departed this life in Rome on the 3rd of May 1850, aged 21 years". 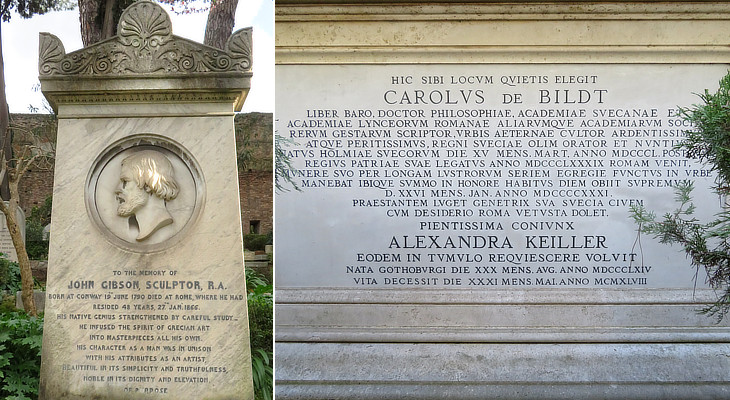 Many epitaphs are a tribute to Rome: in some cases the dead were buried in this cemetery because of their firm will and their epitaphs show their love for the city.
John Gibson stressed that he had lived in Rome for forty-eight years; he came in 1818 to study with Antonio Canova and he settled in the City, although the greatest part of his works were made to decorate public buildings in Britain. He found that Papal Rome was less inquisitive on private matters than his homeland.
Charles de Bildt, a Swedish Academist, came to Rome in 1889 as Ambassador of his country and lived in the City until his death in 1931; he became a member of Accademia dei Lincei, the most important Italian academy. He was Urbis Aeternae cultor ardentissimus atque peritissimus, a passionate and very competent scholar of the history of the Eternal City and he wrote an essay on Queen Christina of Sweden and Cardinal Decio Azzolino. His daughter, Blanceflor, married a Boncompagni Ludovisi and at her death she donated one of the family palaces to the City of Rome. 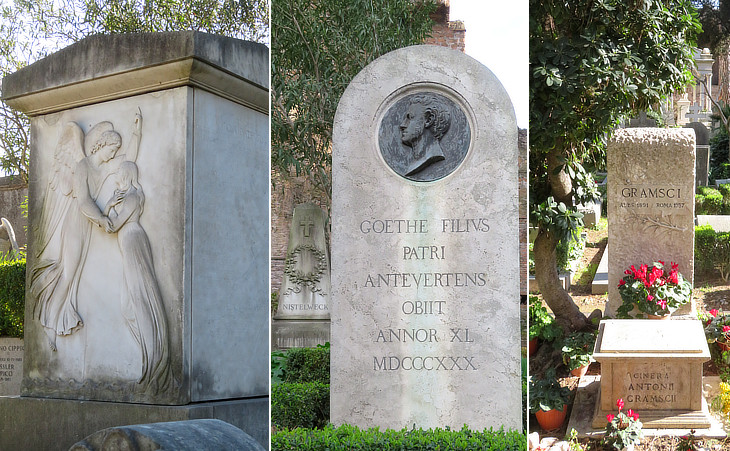 I may seem unduly to refine, but the injunction to the reader in the monument to Miss Bathurst, drowned in the Tiber in 1824, "If thou art young and lovely, build not thereon, for she who lies beneath thy feet in death was the loveliest flower ever cropt in its bloom", affects us irresistibly as a case for tears on the spot. The whole elaborate inscription indeed says something over and beyond all it does say. The English have the reputation of being the most reticent people in the world, and as there is no smoke without fire I suppose they have done something to deserve it; yet who can say that one does n't constantly meet the most startling examples of the insular faculty to "gush"? In this instance the mother of the deceased takes the public into her confidence with surprising frankness and omits no detail, seizing the opportunity to mention by the way that she had already lost her husband by a most mysterious visitation. The appeal to one's attention and the confidence in it are withal most moving. The whole record has an old-fashioned gentility that makes its frankness tragic. You seem to hear the garrulity of passionate grief.
Henry James - Italian Hours - 1909
The whole inscription reads as follows:

BENEATH THIS STONE ARE INTERRED
THE REMAINS OF
ROSA BATHURST
WHO WAS ACCIDENTLY DROWNED IN THE TIBER ON THE
11 OF MARCH 1824. WHILST ON A RIDING PARTY; OWING
TO THE SWOLLEN STATE OF THE RIVER, AND HER SPIRITED
HORSE TAKING FRIGHT. SHE WAS THE DAUGHTER
OF BENJAMIN BATHURST WHOSE DISAPPEARANCE
WHEN ON A SPECIAL MISSION TO VIENNA, SOME YEARS
SINCE, WAS AS TRAGICAL AS UNACCOUNTABLE: NO
POSITIVE ACCOUNT OF HIS DEATH EVER HAVING BEEN
RECEIVED BY HIS DISTRACTED WIFE. HE WAS LOST
AT TWENTY SIX YEARS OF AGE.
HIS DAUGHTER WHO INHERITED HER FATHER'S
PERFECTIONS, BOTH PERSONAL AND MENTAL, HAD COMPLETED
HER SIXTEENTH YEAR WHEN SHE PERISHED BY AS
DISASTROUS A FATE.
READER
WHOEVER THOU ART, WHO MAY PAUSE TO PERUSE
THIS TALE OF SORROWS, LET THIS AWFUL LESSON
OF THE INSTABILITY OF HUMAN HAPPINESS SINK DEEP
IN THY MIND.- IF THOU ART YOUNG AND LOVELY
BUILD NOT THEREON, FOR SHE WHO SLEEPS IN DEATH
UNDER THY FEET, WAS THE LOVELIEST FLOWER, EVER CROPT
IN ITS BLOOM.- SHE WAS EVERY THING THAT THE FONDEST.
HEART COULD DESIRE, OR THE EYE COVET,
THE JOY AND HOPE OF HER
WIDOWED MOTHER
WHO ERECTS THIS POOR MEMORIAL
OF HER IRREPARABLE LOSS.
"EARLY, BRIGHT, TRANSIENT, CHASTE, AS MORNING DEW"
"SHE SPARKLED, WAS EXHALED AND WENT TO HEAVEN".

The death of Rosa Bathurst was recorded by Stendhal in his diary and from it we know that Rosa was riding outside Porta del Popolo and that her body was found near Ponte Molle, so most likely she fell in the water near Acqua Acetosa or on the other side of the river along Via Flaminia.
When Goethe imagined being buried beside the Pyramid, he did not know he had a foreknowledge that his son, born in 1789, would die in Rome in 1830 and be buried there. The monument to Julius August Goethe shows how hard it is to be the son of a genius. The epitaph does not mention his first name: he is just "Goethe filius" (Goethe's son).
Antonio Gramsci was one of the founders of the Italian Communist Party; he died in 1937, after having spent many years in prison. Tatjana Schucht, his sister-in-law, belonged to the Russian Orthodox Church and she was allowed to place the ashes of Gramsci on a grave she had bought for her family (she eventually returned to Russia). 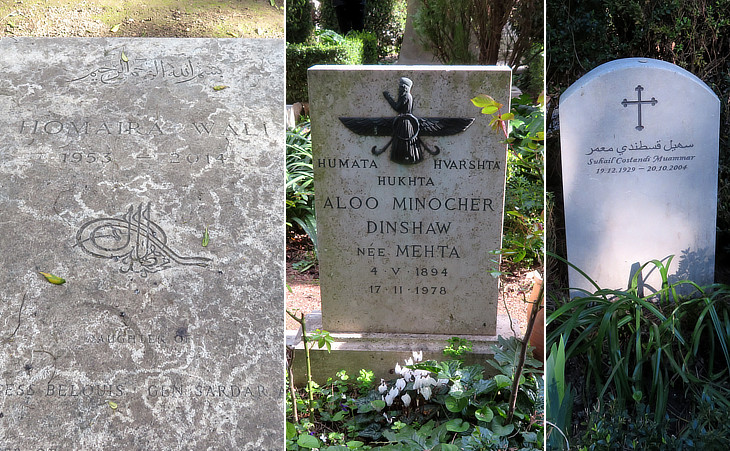 (left) Tomb of Princess Homaira Wali of the Afghan Royal Family and the tughra (monogram) of King Mohammed Zahir Shah; (centre) tomb of a lady of the Indian Zoroastrian Community; (right) tomb of a member of a Lebanese Christian non-Catholic community

The cemetery is usually called Cimitero degli Inglesi o Protestante, but its proper name is Cimitero Acattolico (non-Catholic), because in addition to Protestants it serves as burial ground for Greek Orthodox, Jews, Muslims, Zoroastrians and atheists. 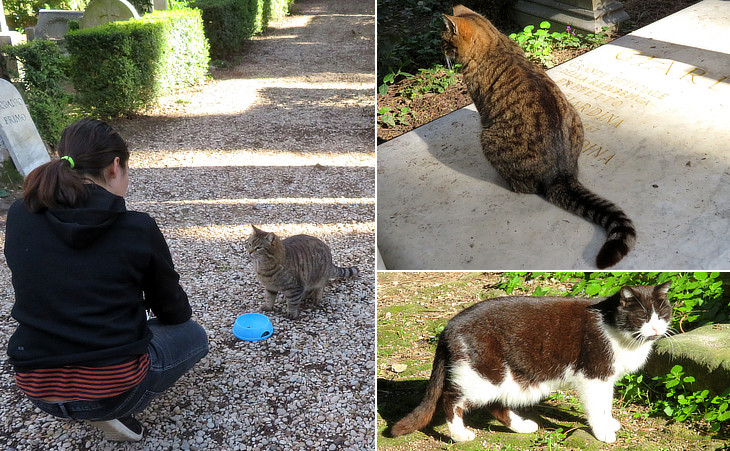 Cats at the Protestant Cemetery; the image used as background for this page shows a chapel which was built when the cemetery was enlarged; it stands opposite the Commonwealth War Cemetery of Testaccio

Other Days of Peace pages:
A Sunny Day in Villa Borghese
At the Flea Market
At the Beach
Voicing Your Views ..... and feeling better
Christmas in Rome
Eating Outdoors
Celebrating the Foundation of Rome
A visit to Roseto di Roma
Running the Marathon
Watching the Parade
The procession of La Madonna de Noantri
Attending Winter Ceremonies
Rome's Sleepless Night
Attending 2007 July Events
Jogging at Valle delle Camene
Sailing on the River to see the Bridges of Roma
An October Outing to Marino
A Special Spring Weekend
Embassy-hunting in Parioli
Attending a Funeral ...and enjoying it!
Celebrating Eritrean Michaelmas in Rome
Visiting Rome at Dawn
Visiting Rome in the Moonlight
Visiting Rome on a Hop-on-Hop-off Bus
Visiting Multi-ethnic Rome
Baroque Fireworks
Playing in the Snow at the Janiculum
Watching the Pride Parade
Reading Memoirs of Hadrian at Villa Adriana
Visiting the Movie Sets at Cinecittà
Looking up at the Ceilings of the Vatican Palaces
Spending the Last Roman Day at St. John Lateran's Cloister
Reading Seneca at the Baths
Reading Ovid at St. Peter's
Walking the Dog at Valle della Caffarella