February 2, 1787. Nobody who has not taken one can imagine the beauty of a walk through Rome by full moon. All details are swallowed up by the huge masses of light and shadow, and only the biggest and most general outlines are visible. (..) This is the kind of illumination by which to see the Pantheon, the Capitol, (the Colosseo), the square in front of St. Peter's and many other large squares and streets.
J. W. Goethe - Italian Journey - translation by W. H. Auden and E. Mayer - Collins 1962. 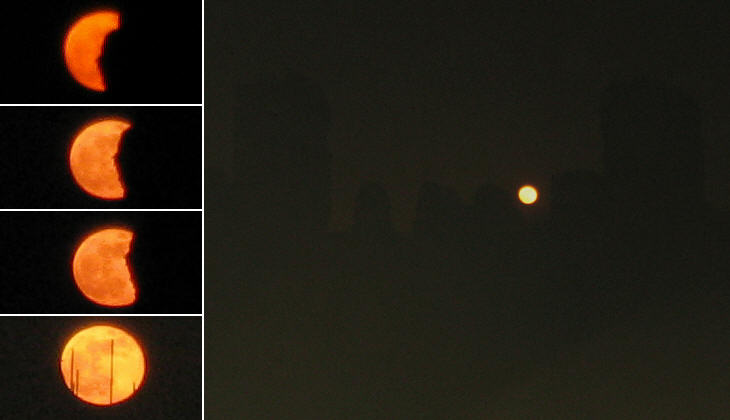 Today, unless there is a general failure of the electric system, we cannot experience the beauty of the walk Goethe recommended; for this reason this page has many literary quotations by poets and writers who were fascinated by moonlit Rome. The images of this page were taken on January 9, 2009: the Moon was full and it was at perigee and therefore it appeared brighter and larger than usual.
The northern side of S. Saba, one of the two peaks of the Aventine Hill provided a good observation point for watching the rise of the moon. The large avenue above the ruins of Terme di Caracalla is a rather dark area and the ruins themselves form a barrier to the city lights. The Moon appeared from behind an ancient wall and gradually rose, lost its red colour and gained brightness; at that point one could see the profile of the two surviving gigantic pillars at the centre of the baths.
In the past moonlight had many practical effects; for instance it allowed travelling by night:
September 11, 1786 - From Brenner to Bolzano/Bozen. The innkeeper asked me if I would not like to start on my way at once because the moon would soon be rising and the road was excellent. (..) The postilion fell asleep and the horses trotted downhill at great speed along a road they knew. Very soon we came to the Adige, rushing along between high cliffs. The moon rose and lit up the gigantic masses of the mountains. Goethe 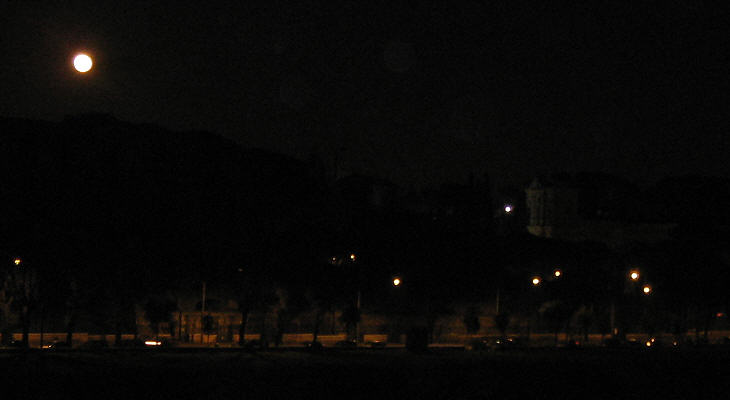 April 1788. My farewell to Rome was heralded in a particularly solemn manner: for three consecutive nights a full moon stood in a cloudless sky, diffusing its magic over the immense city, and more than ever before, I felt myself transported into another simpler and greater world. Goethe
The northern peak of the Aventine Hill, near the Monument to Giuseppe Mazzini offered a view over parts of the ancient city where the impact of modern illumination is minor; the light of the Moon allowed detection of the dark mass of the ancient ruins. 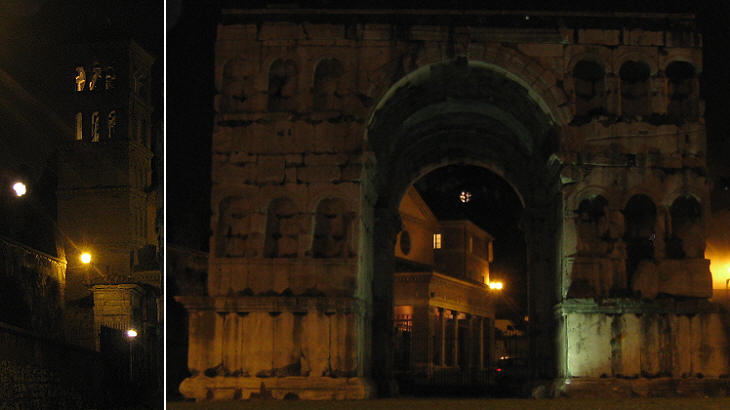 Goethe travelled through Italy from 1786 to 1788, but he published his Italian Journey in 1816; almost at the same time Lord Byron chanted the spell of Roman nights in two of his works:

Childe Harold - Canto Four - CXLIV - (1818)
But when the rising moon begins to climb
Its topmost arch, and gently pauses there;
When the stars twinkle through the loops of time,
And the low night-breeze waves along the air
The garland-forest, which the gray walls wear,
Like laurels on the bald first Cæsar's head;
When the light shines serene but doth not glare,
Then in this magic circle raise the dead:
Heroes have trod this spot -- 'tis on their dust ye tread.

Manfred - Act III - Scene IV (1817)
The stars are forth, the moon above the tops
Of the snow-shining mountains. Beautiful!
I linger yet with Nature, for the night
Hath been to me a more familiar face
Than that of man; and in her starry shade
Of dim and solitary loveliness,
I learnd the language of another world.
I do remember me, that in my youth,
When I was wandering,upon such a night
I stood within the Coliseums wall
Midst the chief relics of almighty Rome.
The trees which grew along the broken arches
Waved dark in the blue midnight, and the stars
Shone through the rents of ruin;

The lights around Colosseo are too strong to allow appreciation of moonlight and "the trees which grew along the broken arches" are no longer there so I preferred to watch the Moon peering through pines and cypresses near the bell tower of S. Giorgio al Velabro and just below Arco di Giano (the image used as background for this page shows a detail of that picture). 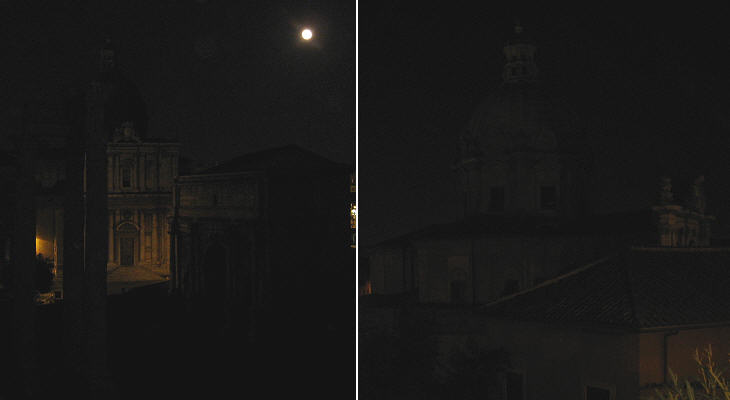 Michelangelo Merisi da Caravaggio (1571-1610) was an Italian painter who developed a new approach to the use of light and shadow; many of his paintings are night scenes where the subjects are illuminated by a lamp or a torch (see one of them at Messina). His works are highly dramatic and he paid little attention to landscape; nonetheless he influenced landscape painters, among them Adam Elsheimer (1578-1610), a German painter who came to Rome in 1600; he used soft tones for his scenes where the Moon was the main source of light. Roman night landscapes became a genre of its own with moonlight just hinting at the buildings.
From the terraces overlooking the Roman Forum it was possible to take pictures which recall those paintings. A walk in the moonlight inevitably leads to acting as a gooseberry (for just the time needed for taking a few pictures); lovebirds are likely to be more familiar with popular songs than old poems.
Foreigners may have in mind Dee D. Jackson singing:
You got the moonlight and starlight
To make my dreams come true tonight
or, if they are not that young, they may recall Perry Como humming:
Youre my moonlight love,
Though you leave me when stars fade away
Kiss me darling and tenderly say
Well meet in the moonlight
. . . again!
For Roman couples the following song is a must: 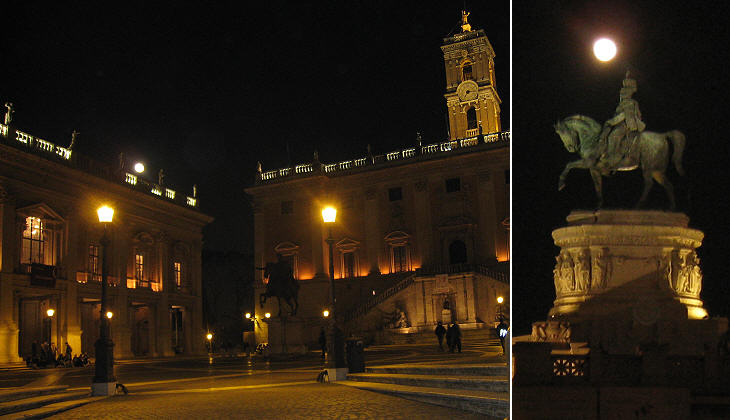 Goethe was reminded of ancient poems by his moonlight walks: he closed Italian Journey with a quotation from Ovid describing his last Roman night (the poet was banished by Emperor Augustus to a remote town on the Black Sea).

Goethe and Byron made moonlight walks a must for XIXth century visitors of Rome. This at least for the first half of that century; later on the excessive number of night ramblers reduced the appeal of this experience. 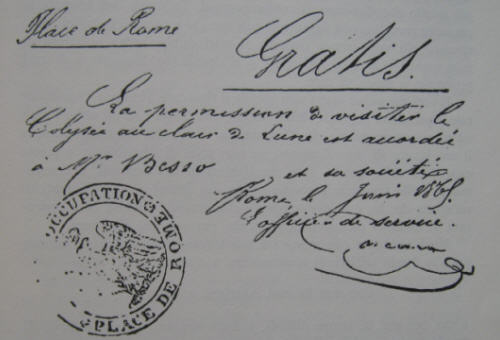 Nataniel Hawthorne in The Marble Faun described with some irony one such walks:
The party kept onward, often meeting pairs and groups of midnight strollers like themselves. On such a moonlight night as this, Rome keeps itself awake and stirring, and is full of song and pastime, the noise of which mingles with your dreams, if you have gone betimes to bed. But it is better to be abroad, and take our own share of the enjoyable time; for the languor that weighs so heavily in the Roman atmosphere by day is lightened beneath the moon and stars. (..) They again moved forward. And still, from the Forum and the Via Sacra, from beneath the arches of the Temple of Peace on one side, and the acclivity of the Palace of the Caesars on the other, there arose singing voices of parties that were strolling through the moonlight. Thus, the air was full of kindred melodies that encountered one another, and twined themselves into a broad, vague music, out of which no single strain could be disentangled. These good examples, as well as the harmonious influences of the hour, incited our artist friends to make proof of their own vocal powers. With what skill and breath they had, they set up a choral strain,--"Hail, Columbia!" we believe, which those old Roman echoes must have found it exceeding difficult to repeat aright. (..)The party ascended the winding way that leads from the Forum to the Piazza of the Campidoglio on the summit of the Capitoline Hill. They stood awhile to contemplate the bronze equestrian statue of Marcus Aurelius. The moonlight glistened upon traces of the gilding which had once covered both rider and steed (..). 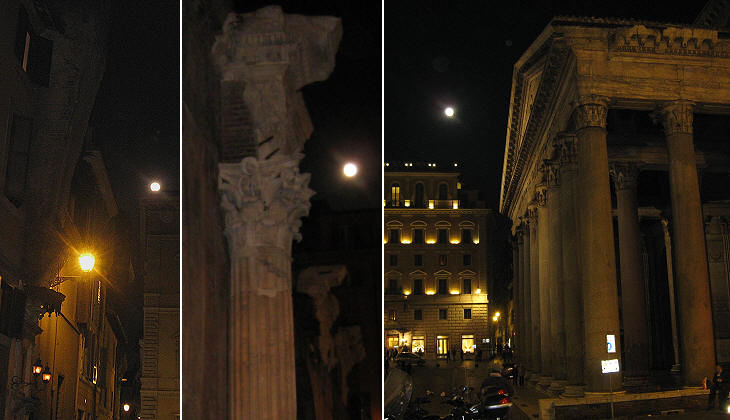 (left to right) Arco della Ciambella (with three sources of light: a modern public light, the moon and two low lamps before a sacred image), Basilica di Nettuno and Pantheon

Moon was chanted by many Romantic poets:
To the Moon
Art thou pale for weariness
Of climbing heaven, and gazing on the earth,
Wandering companionless
Among the stars that have a different birth,
And ever-changing, like a joyless eye
That finds no object worth its constancy?
Percy Bysshe Shelley

In Italy Giacomo Leopardi often wrote about the Moon. 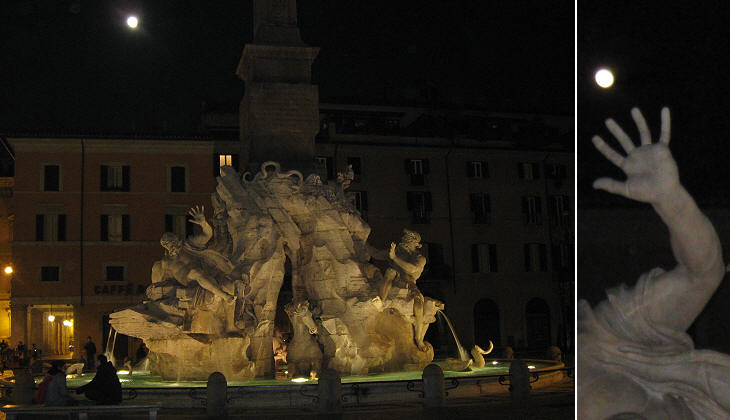 Henry Wadsworth Longfellow who translated into English Dante's The Divine Comedy spent some time in a flat in Piazza Navona during 1828-1829:
Our windows look out upon the square; (..) and sitting by the open window, I (..) enjoy the cool air of morning and evening, and even feel the freshness of the fountain, as its waters leap in mimic cascades down the side of the rock (excerpt from Outre Mer).

Many years later he published a poem which maybe was reminiscent of his Roman moonlight walks.

Moonlight
As a pale phantom with a lamp
Ascends some ruined haunted stair,
So glides the moon along the damp
Mysterious chambers of the air.

Now hidden in cloud, and now revealed,
As if this phantom, full of pain,
Were by the crumbling walls concealed,
And at the windows seen again.

Until at last, serene and proud
In all the splendour of her light,
She walks the terraces of cloud,
Supreme as Empress of the Night.

I look, but recognize no more
Objects familiar to my view;
The very pathway to my door
Is an enchanted avenue.

All things are changed. One mass of shade,
The elm-trees drop their curtains down;
By palace, park, and colonnade
I walk as in a foreign town.

The very ground beneath my feet
Is clothed with a diviner air;
White marble paves the silent street
And glimmers in the empty square.

Illusion! Underneath there lies
The common life of everyday;
Only the spirit glorifies
With its own tints the sober grey.

In vain we look, in vain uplift
Our eyes to heaven, if we are blind;
We see but what we have the gift
Of seeing; what we bring we find.
(In the Harbor - 1882)

Other Days of Peace pages:
A Sunny Day in Villa Borghese
At the Flea Market
At the Beach
Voicing Your Views ..... and feeling better
Christmas in Rome
Eating Outdoors
Celebrating the Foundation of Rome
A visit to Roseto di Roma
The procession of La Madonna de Noantri
Running the Marathon
Watching the Parade
Finding Solace at the Protestant Cemetery
Attending 2007 July Events
Rome's Sleepless Night
Attending Winter Ceremonies
Jogging at Valle delle Camene
Sailing on the River to see the Bridges of Roma
An October Outing to Marino
A Special Spring Weekend
Embassy-hunting in Parioli
Attending a Funeral ...and enjoying it!
Celebrating Eritrean Michaelmas in Rome
Visiting Rome at Dawn
Visiting Rome on a Hop-on-Hop-off Bus
Visiting Multi-ethnic Rome
Baroque Fireworks
Playing in the Snow at the Janiculum
Watching the Pride Parade
Reading Memoirs of Hadrian at Villa Adriana
Visiting the Movie Sets at Cinecittà
Looking up at the Ceilings of the Vatican Palaces
Spending the Last Roman Day at St. John Lateran's Cloister
Reading Seneca at Caracalla's Baths
Reading Ovid at St. Peter's
Walking the Dog at Valle della Caffarella