In this 1756 etching Giuseppe Vasi showed on the left side the first house of Spina di Borgo, a group of buildings which separated Borgo Nuovo from Borgo Vecchio, two parallel streets which led to S. Pietro. In this way Vasi has left a visual memory of a fountain built by Carlo Maderno for Pope Paul V which was demolished in 1849; it was similar to that at Piazza del Monte di Pietà.
The view is taken from the green dot in the small 1748 map here below. It shows that Vasi greatly twisted perspective laws in order to include the fountain in the view of S. Maria della Traspontina. In the description below the plate Vasi made reference to: 1) Entrance to Oratorio della Dottrina Cristiana; 2) Palazzo Giraud (in Piazza Scossacavalli); 3) Street leading to S. Pietro (Borgo Nuovo). The map shows also: 4) Oratorio di S. Maria Annunziata; 5) S. Maria della Traspontina. The idea of opening a large street leading to Piazza S. Pietro was first debated during the pontificate of Pope Sixtus V who in 1586 relocated an obelisk at the centre of the square and in 1589 completed the dome of the basilica; in 1694 Carlo Fontana developed a project to pull down all the buildings between Piazza S. Pietro and Piazza Scossacavalli; other plans were developed in 1776, 1812 and 1850, but only in 1936 a project was eventually approved and financed; the first buildings were demolished in that year, but, because of WWII, the new grand entrance to Piazza S. Pietro was completed in 1950 (the image used as background for this page shows the inscription celebrating the opening of the avenue). 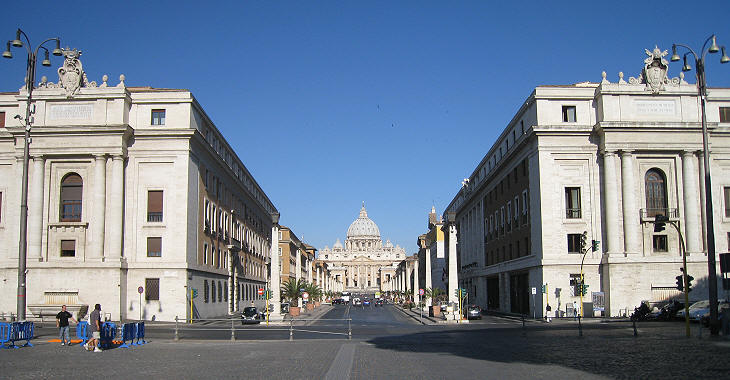 The avenue was named Via della Conciliazione, with a reference to the 1929 reconciliation between the Holy See and Italy after the 1870 events.
Marcello Piacentini and Attilio Spaccarelli redesigned the whole area between Castel Sant'Angelo and Piazza S. Pietro; imposing buildings replaced many modest houses, the inhabitants of which were moved to Garbatella, at the time a far away new development.
All the buildings along Borgo Nuovo, including Palazzo Accoramboni, were pulled down except for S. Maria della Traspontina and Palazzo Giraud (they are not perfectly aligned with the new street); the same occurred to the buildings along Borgo Vecchio except for Palazzo dei Penitenzieri and Palazzo Cesi; the architectonic elements of façades which were deemed of artistic value were dismantled and reassembled on modern buildings; the main fountain of the neighbourhood was relocated opposite S. Andrea della Valle. 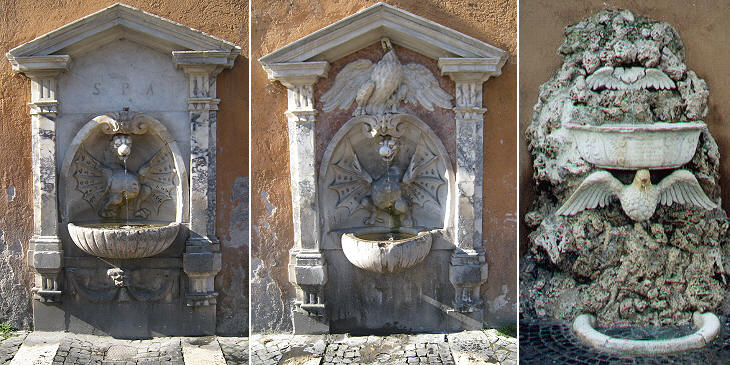 Small fountains which were relocated: (left/centre) to Palazzo dei Penitenzieri; (right) to S. Alessio. They show the eagles and dragons of the Borghese family 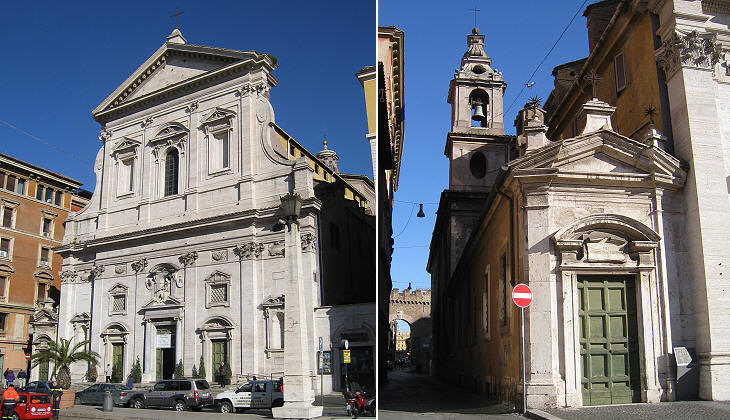 Entring into the Borgo, we went towards S. Peters Church, and in the way stept into the Church of the Carmelites, called Santa Maria Transpontina, where in a Chapple are seen two Pillars of Stone enchased in wood, to the which S. Peter and S. Paul were tyed when they were whipped before their death, according to the Romans custom.
Richard Lassels' The Voyage of Italy, or a Compleat Journey through Italy in ca 1668
The church has a reference to Traspontina (beyond the bridge), rather than to Borgo, because when it was completed the neighbourhood was still part of Rione Ponte and also because in origin the church was located much nearer to Ponte degli Angeli. It was a medieval church with a portico; it housed two broken columns to which St. Peter and St. Paul were tied; because of its proximity to the river it was often damaged by floods. In 1564 Pope Pius IV decided to surround Castel Sant'Angelo with new walls and the church was pulled down. It was rebuilt along Borgo Nuovo, but the construction was completed only in 1668. You may wish to see the church in a 1588 Guide to Rome, when the façade by Sallustio Peruzzi and Ottavio Mascherino was already finished, but the dome and the transept were yet to be started. 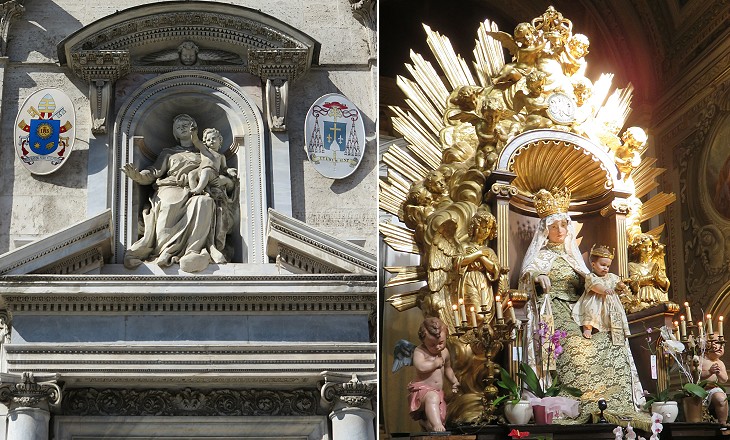 The church belonged to the Carmelites who had an adjoining monastery. Many general priors of the Order had their residence at S. Maria della Traspontina (today the official name is S. Maria in Traspontina). In 1922 a yearly procession carrying a statue of Our Lady of Mount Carmel through the streets of Borgo was instituted. It is similar to that of Trastevere and it takes place on the Sunday preceding July 16, the date of the Feast of Our Lady of Mount Carmel. 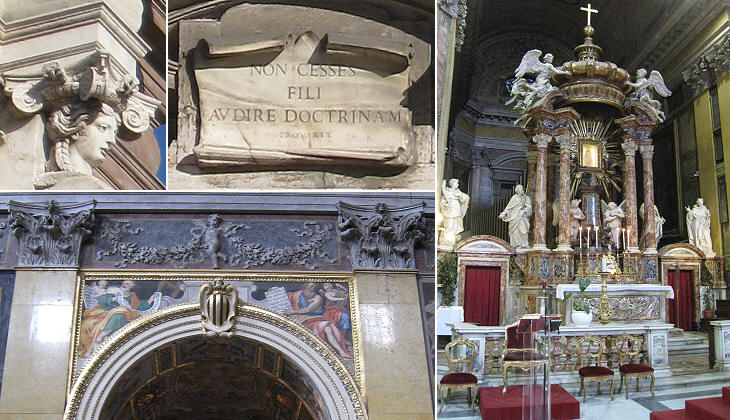 (left-above) Detail of the church façade and inscription above the entrance of the oratory; the inscription is based on Proverbs 19 - 27 "Stop listening to instruction, my son, and you will stray from the words of knowledge"; (left-below) XVIth century decoration of the interior; (right) main altar by Carlo Fontana, a fine example of the use of coloured marbles

Because of its proximity to S. Pietro, the Carmelites ensured their church had a very rich decoration, although because of its size it could not withstand comparison with the churches of other important orders, e.g. S. Maria in Aracoeli (Franciscans), S. Maria sopra Minerva (Dominicans) and il Gesù (Jesuits). 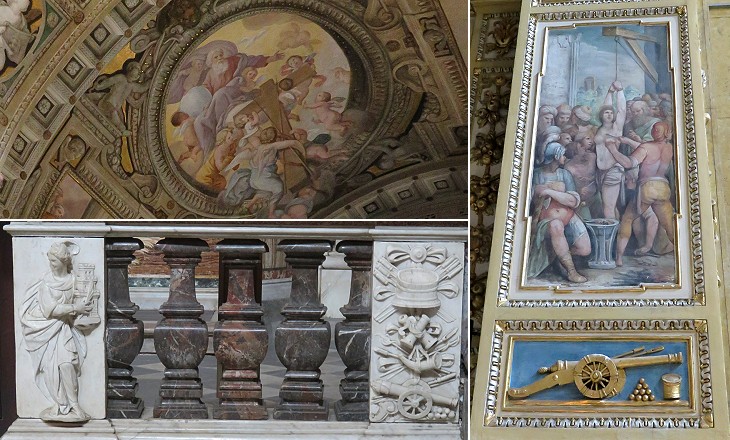 (left-above) Cappella del Crocifisso: The Triumph of the Cross by Bernardino Gagliardi; (left-below) Cappella di S. Barbara: balustrade with a relief portraying St. Barbara holding a symbolic depiction of Castel Sant'Angelo; (right) Torture of St. Barbara by Cesare Rossetti under the direction of Giuseppe Cesari aka il Cavalier d'Arpino (you may wish to see another painting depicting the same subject)

Here's also a curious Picture of S. Barbara by Cavalier Gioseppe.Lassels
In 1594 the brotherhood of the gunners of Castel Sant'Angelo with the support of the commanders of the fortress started the decoration of a chapel dedicated to St. Barbara, their patroness. They involved in the task il Cavalier d'Arpino who was the leading and best paid painter of his time and decorated with large frescoes the main hall of Palazzo dei Conservatori. The name of the saint has passed into Italian language and santabarbara means gunpowder magazine. Far saltare la santabarbara (to set fire to the gunpowder magazine) was the last resort of the commander of a fortress or of a ship to avoid its seizure by the enemy or to quell a mutiny. The guild was in charge of the safe execution of the fireworks which took place at Castel Sant'Angelo on Easter Sunday and the Feast of Sts. Peter and Paul. 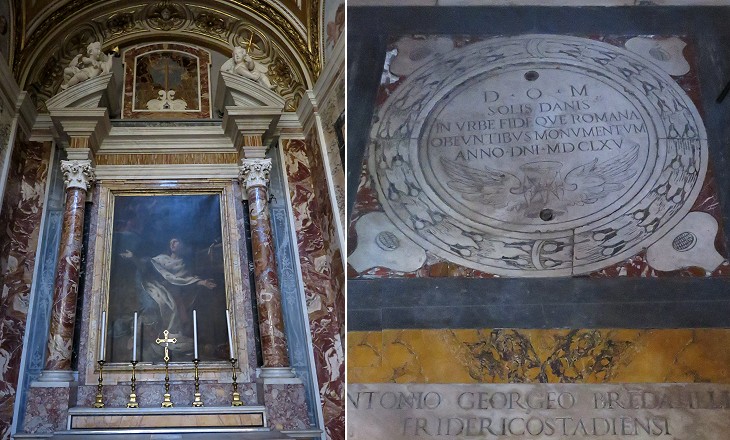 (left) Cappella di S. Canuto with a painting by Monsù Bernardo; (right) 1665 inscription on the floor of the chapel saying that it is reserved for graves of Catholic Danes

Canute IV the Holy was King of Denmark in 1080-1086. He was the first Dane to be canonized in 1101 by Pope Paschal II. In 1536 Lutheranism became the official religion of the Kingdom of Denmark and for a century Danes did not dare to come to Rome. Religious conflicts died down after 1648 when the Peace of Westphalia ended the Thirty Years' War. Christian Payngk, the son of a member of the Danish court, converted to Catholicism and obtained a chapel at S. Maria in Traspontina for the very small Danish community in Rome. Its best known member was Eberhart Keil, who, after having spent some years in the Netherlands, similar to many other painters of northern Europe, decided to visit Italy. He eventually settled in Rome where he became known as Monsù Bernardo (many foreign artists were called Monsù from French monsieur) and was regarded as a bambocciante, a painter of scenes of Roman life.
You may wish to see a directory of churches and chapels belonging to a guild or a nation. 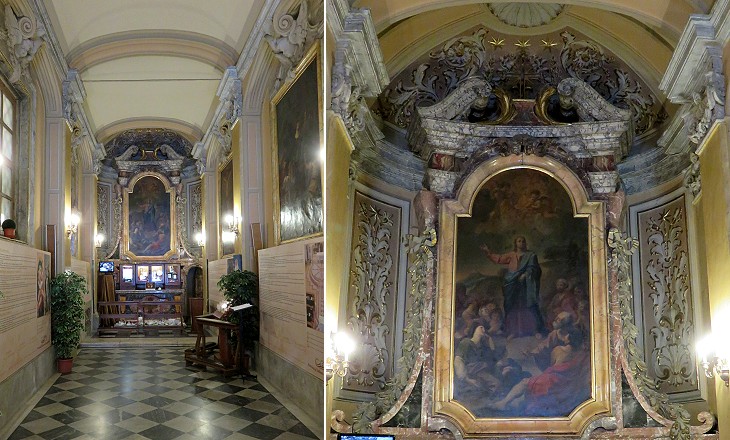 Interior of the Oratory with an altarpiece by Luigi Garzi

In 1714 Oratorio per la Dottrina Cristiana, a small oratory where children received their religious education was built to the left of the church: it was designed by Nicola Michetti. 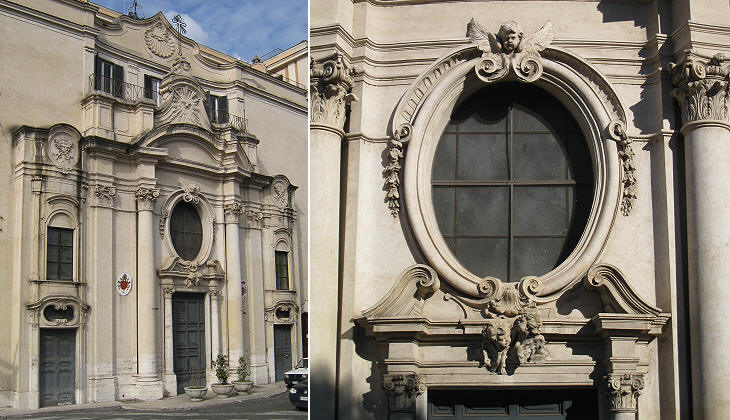 The small oratory of S. Maria Annunziata was built in 1746 by Pietro Passalacqua. It shows the influence of Borromini in the use of convex and concave lines and it brings to mind that of S. Croce in Gerusalemme, also by Passalacqua. The building was located in Borgo S. Spirito opposite the hospital by the same name. Because of the redesign of the area the oratory was demolished and rebuilt in a new location near Ponte Vittorio Emanuele, the modern bridge which links Borgo with the centre of Rome. You may wish to see the oratory in a painting in the Vatican Library.

Interior with an altarpiece by Angelo Masserotti