by G. Francino: Trastevere and Borgo
(an illustration of the guide showing - left to right - the coat of arms of Pope Sixtus V, a generic fountain having some resemblance with that near SS. Venanzio e Ansovino and a personification of the City of Rome)

The first section of the guide was devoted to Le Sette Chiese (the most important churches). The description of the other churches of Rome was structured on itineraries, the first of which led the traveller through Trastevere and Borgo.
This shows that the book was not meant for the very devout only, but also for those who were interested in visiting the City. Texts having a clearer religious purpose, such as Roma Sancta, an almost contemporary (1581) manuscript by the Rev. Gregory Martin (*), listed the churches on different criteria i.e. those which were to be visited during Lent or those which belonged to the same Order (Franciscan, Dominican, etc.). The objective of Roma Sancta was clearly spelt out in this sentence of its preface:
Rome in very deede is old many wayes, old fayth, old charitie, old devotion, old Churches, old Relikes, old Sainctes. In al these so old verie neere as in Christianitie it self which Peter and Paule taught them. And this is one principal pleasure among the rest which they take that come to this Citie, and that thou (Gentle Reader) mayst take of this booke, to se how Rome after so many yeres & so great alterations in a great part of the world besides, is notwithstanding alwayes like it self. 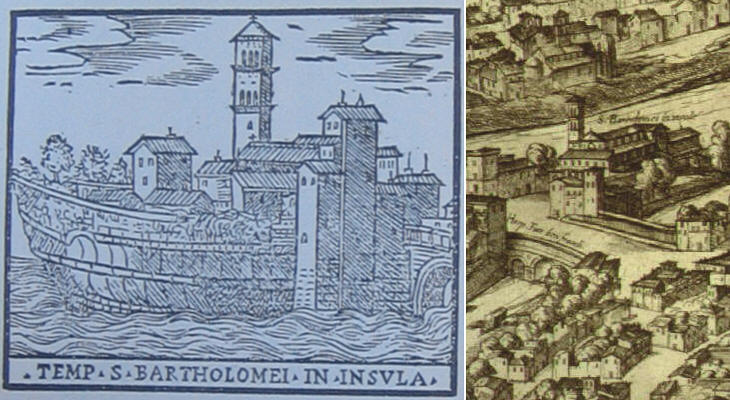 Isola Tiberina is included in Rione Ripa, but at the time Francino wrote his guide, the boundaries of the Rioni were not defined with preciseness and the inclusion of this church at the beginning of the description of Trastevere made sense. The illustration emphasizes the aspect the island had during the Roman Empire when it was given the shape of a small ship. As a matter of fact that appearance was already lost by the time Francino wrote his guide, as a 1593 Map of Rome by Antonio Tempesta shows. The illustration shows the end of Ponte Quattro Capi and Torre Caetani.
According to the guide four martyrs were thrown into the round well near the main altar of the church. Because the palm is the symbol of martyrdom, on Palm Sunday special indulgences were granted to those who attended Mass at S. Bartolomeo. You can see in the historical section the well decorated with reliefs portraying the martyrs and the remaining section of the travertine wall which gave the island the shape of a ship. 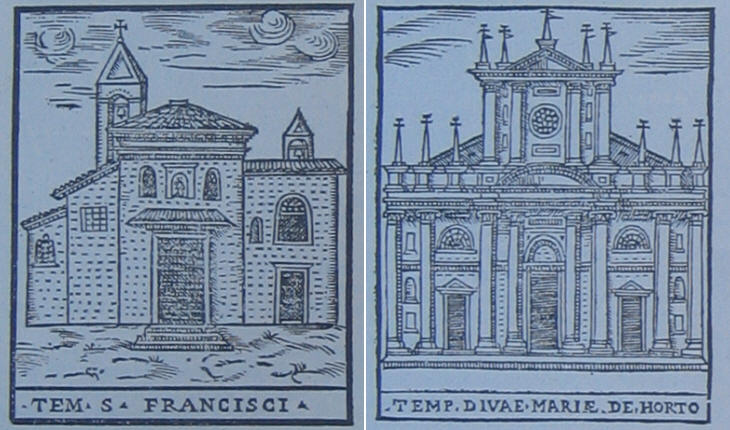 S. Francesco a Ripa is the church where St. Francis was allowed to open his first monastery in Rome. The illustration shows it in its medieval appearance. The guide mentions it mainly because the body of Ludovica Albertoni was buried there. This woman, who died in 1533, had a reputation for working miracles and for being able to levitate during her ecstasies. This fame continued after her death, although the Church was very cautious in endorsing this devotion. It was only in 1671 that Pope Clement X beatified her (the Pope had a distant family link with her). In 1674 her body was relocated to a new chapel designed by Gian Lorenzo Bernini. A few years later the church was widely modified by Mattia de' Rossi who gave it its current Baroque appearance. Ludovica Albertoni's canonization is still pending.

Today S. Maria dell'Orto is rarely visited by tourists. When the guide was written it was one of the newest churches of Rome: it belonged to an important guild, that of the fruit and vegetable sellers. From Martin's Roma Sancta we learn that it had six priests and "they have consequently dayly Masses, and other service, and them selves every Sunday and holy day sing and say withal. (The guilds) adorne their Churches and Chaples, furnish their oratories and altars and al divine Service, celebrate and solemnize their Principal Festes with such holy emulation, that every Companie for the abilitie and condition thereof striveth to beare the bell."
Martin was a devout Catholic and he was very keen on correcting the age-old image of Rome as evil and the medieval slur which read ROMA as Radix Omnium Malorum Avaritia (an acrostic on Rome's greed, literally "avarice is the root of all evil"), or the newly Protestant epithet of "the whore of Babylon". 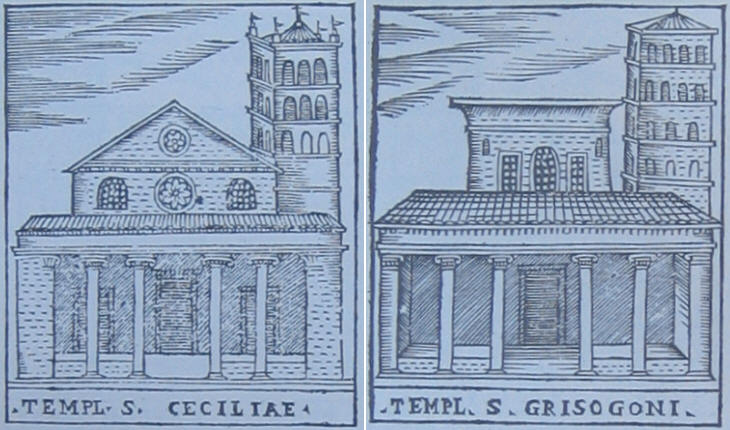 The illustration of S. Grisogono placed next to that of S. Cecilia shows the similarity between the two buildings: a parallel which is now lost because the outer appearance of S. Grisogono was modified by Cardinal Scipione Caffarelli Borghese, nephew of Pope Paul V, in the early XVIIth century. Francino's guide mentions that the church and the adjoining monastery belonged to the Carmelites who celebrated Our Lady of Mount Carmel on July 16. These celebrations led to today's Festa della Madonna de' Noantri. 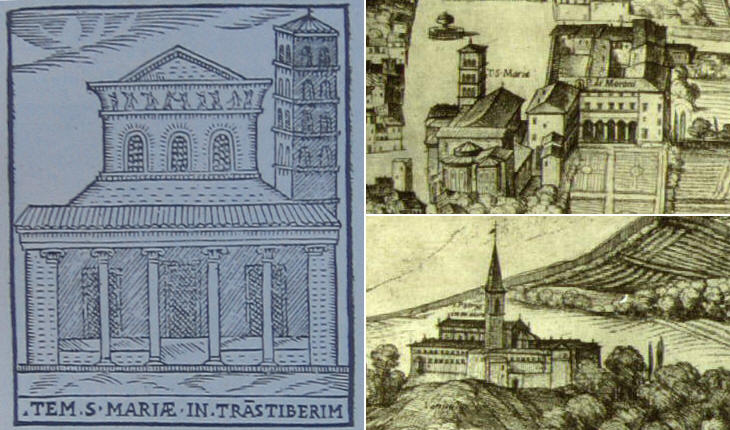 Francino's guide describes the miracle which led to the foundation of S. Maria in Trastevere; the event was narrated by Martin as follows: "In our Ladies Church beyond the river Tyber, what a miraculouse monument is the place within yron gates neere the highe aultar, where in the reigne of Augustus Cesar (and as some write in the verie night that our Saviour was borne) there gushed out of the earth a fountayne of oyle that ranne for the space of one day with a great streame into Tyber; signifying (..) that in that Emperours daies (the 42 yeare of his reigne) Christ the Anoynted King and Priest and Prophet should be borne, the plentiful fountayne and aboundant streame of spiritual oyle, which is grace, wherewith he was anoynted so farre above al other, that of his fulness al we have receaved: for this cause did Calixtus the Pope in the yeare of our lord 220 build a chapel in this place which now is growen to this beautiful Churche."
Notwithstanding some changes to the porch and to the upper part of the façade, today's S. Maria in Trastevere is very similar to the illustration.

The guide discusses S. Pietro in Montorio in quite a different way; just a few words on the indulgences which were granted there while attention is paid to the works of art which embellished the church and in particular there is a mention of an oil painting by Sebastiano del Piombo (Fra Sebastiano Venetiano). 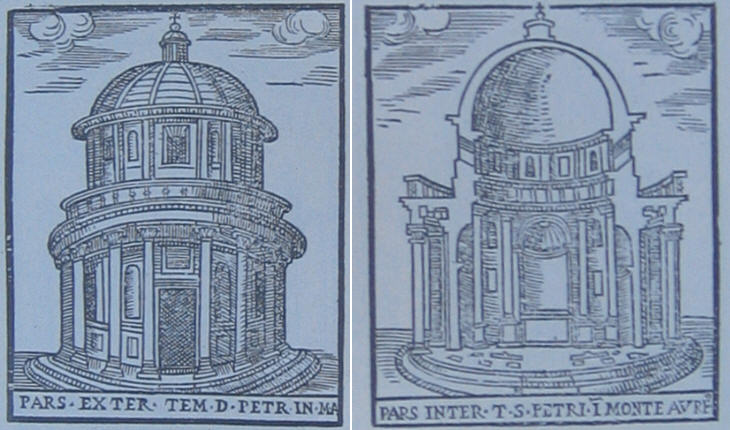 This shift of attention from relics and pious practices to works of art is confirmed by the fact that two illustrations are dedicated to the small temple-like chapel built by Donato Bramante in a courtyard of the monastery. 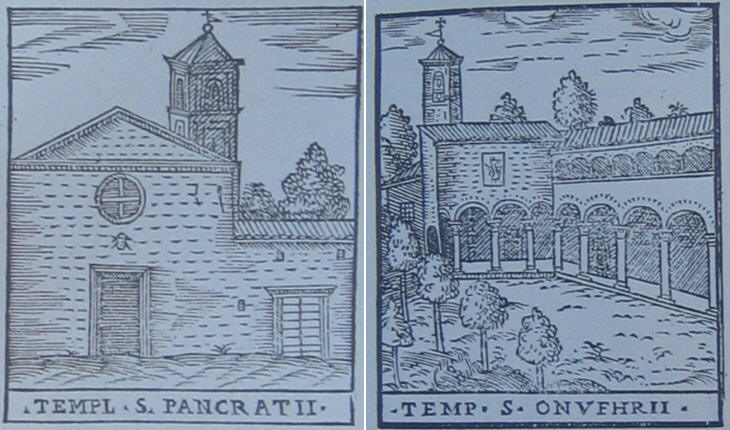 The last two churches of Trastevere which were deemed worthy of being illustrated were both located on the Janiculum. S. Pancrazio attracted the pious visitors because of its catacombs where many martyrs were buried. The guide gave this piece of advice: "the corpses can be seen and touched but they cannot be taken away without papal permission".

At S. Onofrio the pious visitors went to see the tomb of Beato Nicolò da Forca Palena, the founder of the monastery. He died at the age of 100 and this per sè was seen as a miracle. He had a reputation for curing diseases and Pope Nicholas V dictated the inscription for his gravestone. At one point he wrote: "(..) Tu sanas morbos, cedente Macaonis arte (you cured sicknesses without knowing the art of Machaon - the son of Asclepius who healed the wound of Menelaos in Homer's Iliad - Book V). The reference to Machaon is very interesting because it shows the knowledge an Early Renaissance pope had of the classics and that he was not ashamed of showing it. On June 12 the infirm and the sick attended the special celebrations which took place in the church in the hope of a miracle. 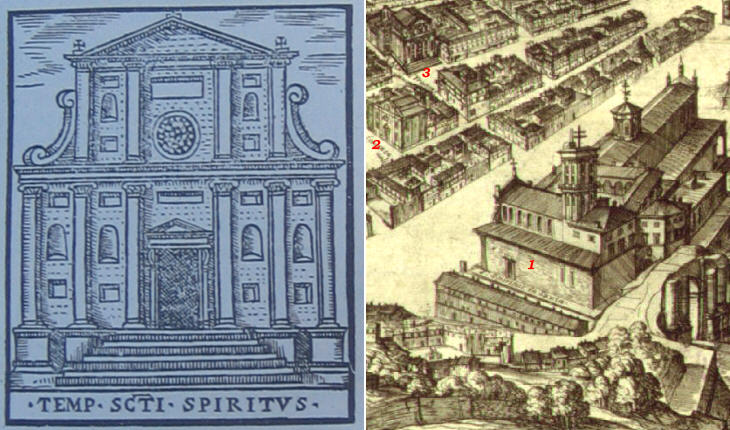 In 1586 Pope Sixtus V added Borgo to the historical rioni of Rome. He completed the reconstruction of S. Spirito and the guide expands on details on its fine ceiling and on its organ which was regarded as the best one of Rome. Martin's Roma Sancta covers in more detail the hospital:"This is of al other the greatest, as it were a litle parish in it self for buildings and distinct roomes. (..) (It has) A great pothecarie shoppe, foure Phisicions, and two Surgeons: which byside al incident and urgent necessities, keepe their ordinary course to visite every one and to prescribe their diet, at certaine houres of the day. Servants for these sick and sore, 40." 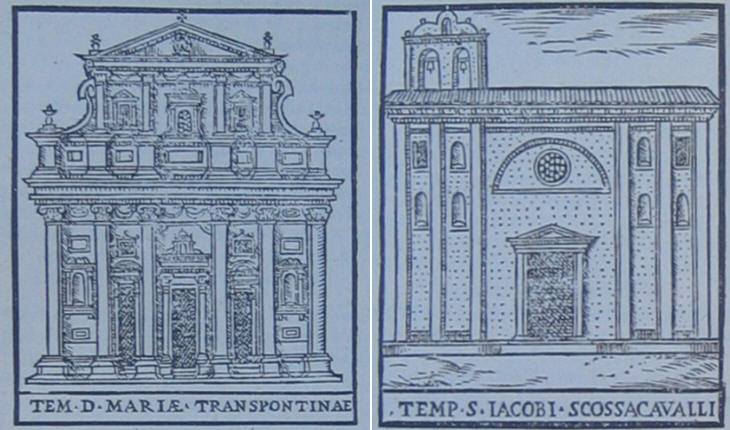 The guide describes the opening ceremony which occurred on February 9, 1587 when S. Maria in Traspontina was completed. A special indulgence was granted to those who attended the event. All the cardinals were part of the procession which brought some relics to the new church. These were previously kept in a church which was demolished by Pope Pius IV when he enlarged the fortifications of Castel Sant'Angelo.

The guide gives a very religious explanation of the name (Scossacavalli) associated with S. Giacomo. According to this account St. Helena arranged the relocation of two stones from Jerusalem to S. Pietro. The first stone was used by Abraham when he was in the process of sacrificing Isaac until he was stopped by an angel. The second stone was used for the Circumcision of Jesus Christ. Very near S. Pietro the horses (It. cavalli) carrying the stones suddenly stopped and died. The stones fell to the ground (hence scossa - shake) and they could no longer be moved. Thus a small church was built to house them. The illustration shows the building before the changes made in 1590-1592.

Francino's book described a small church which was overlooked by almost all the guides which were published later. The reason is most likely due to the fact that it had been rebuilt in 1585 so, similar to S. Maria in Traspontina, it was a very new church. Its full name was S. Michele Arcangelo ai Corridori. It was demolished in 1938 to enlarge a street leading to the Vatican. It was located near il Passetto (aka i Corridori di Castel Sant'Angelo).