on the Palatine Hill - Wandering About

You may wish to read pages on the imperial palaces and the House of Augustus first. 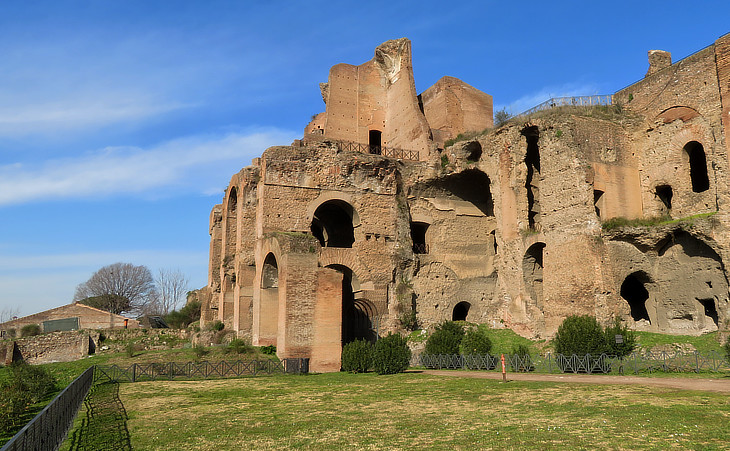 Your walks in the Palatine ruins, if it be one of the many days when the labourers do not work, will be undisturbed, unless you startle a fox in breaking through the brambles in the corridores, or burst unawares through the hole of some shivered fragments into one of the half buried chambers which the peasants have blocked up to serve as stalls for their jackasses, or as huts for those who watch the gardens. The smoke of their wood fires has not hidden the stuccoes and deeply indented mouldings of the imperial roofs.
John Cam Hobhouse - Dissertations on the Ruins of Rome - 1818 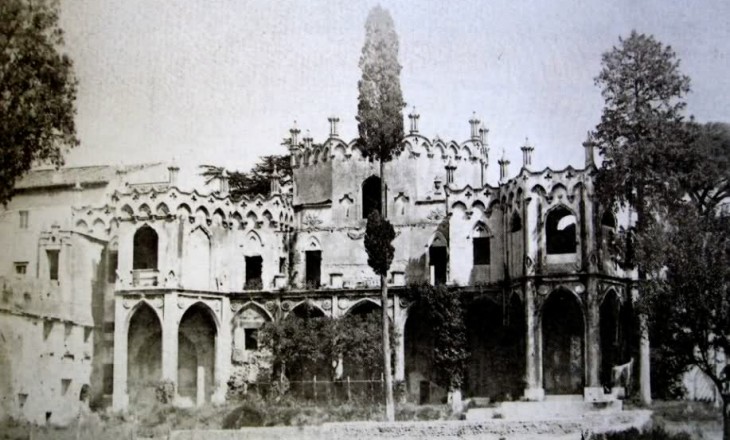 Villa Mills prior to its demolition

The pert villa of an English gentlemen has intruded itself into the palace of the Caesars - as discordant an object to a sensitive idealist as the pink parasol of a lady's maid which put to flight the reveries of some romantic traveller, under the shadow of the great pyramid.
George Stillman Hillard - Six Months in Italy in 1847-1848
(A part of) Domus Flavia fell in 1820 into the hands of Charles Mills, Esq. This Scotch gentleman caused the Casino (built and painted by Raffaellino dal Colle near and above the house of Augustus) to be reconstructed in the Tudor style with Gothic battlements, and raised two Chinese pagodas, painted in crimson, over the exquisite bathrooms used by the founder of the Empire. And for the branches of laurel and the "corona civica", which in accordance with a decree of the Senate ornamented the gates of the palace, Charles Mills substituted the emblem of the Thistle.
Rodolfo Lanciani - New Tales of Old Rome - 1901
The southern side of the Palatine is a pretty quiet corner of the archaeological area which invites to a walk without the risk of falling through a hole inside a buried chamber of the palaces or to see such an eye sore as Villa Mills (it was pulled down in the early XXth century to unearth the ancient structures beneath it). 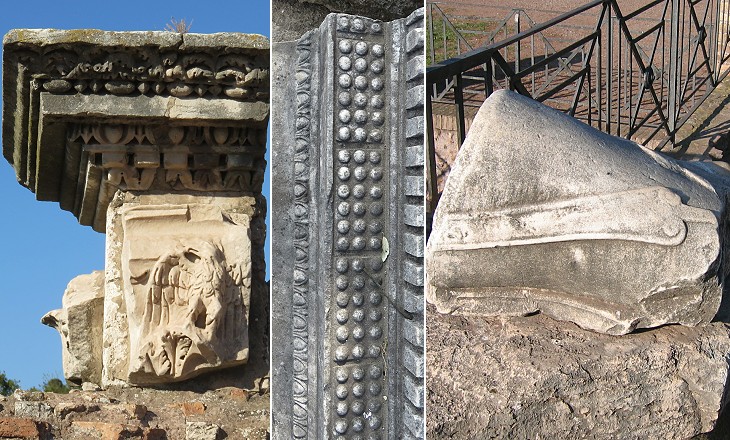 (left) A relief portraying an eagle, symbol of Rome; (centre) a lintel; (right) fragment of a marble foot. A detail of another lintel can be seen in the image used as background for this page

A great part of the Palatine mountain, for example, lies untouched, which was formerly the seat of the imperial palace, and may be presumed to abound with more treasures of this nature than any other part of Rome. (..) But whether it be that the richest of these discoveries fall into the pope's hands, or for some other reason, it is said that the Prince Farnese, who is the present owner of this seat, will keep it from being turned up till he sees one of his own family in the chair.
Joseph Addison - Remarks on several parts of Italy, in the years 1701, 1702, 1703
By the time (after 1870) the Italian government acquired the property of the whole hill and undertook a systematic plan of excavations, most of the decorations, inscriptions, statues and columns of the palaces were gone. Its most interesting findings are on display in a small museum inside the archaeological area, but by wandering about one can still see some interesting fragments of capitals, lintels and statues. 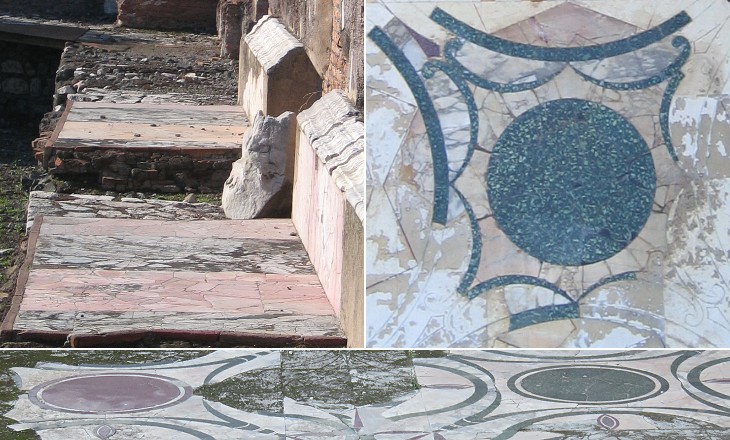 Walls and floors of Domus Flavia were decorated with coloured marbles: it is said that in the last years of his life Emperor Domitian became so wary of a plot to kill him that he had the marbles continuously polished with beeswax so that he could detect anyone approaching him from behind; eventually this did not prevent his assassination.
As the conspirators were deliberating when and how to attack him, whether at the bath or at dinner, Stephanus, Domitilla's (niece of Domitian) steward, at the time under accusation for embezzlement, offered his aid and counsel. To avoid suspicion, he wrapped up his left arm in woollen bandages for some days, pretending that he had injured it, and concealed in them a dagger. Then pretending to betray a conspiracy and for that reason being given an audience, he stabbed the emperor in the groin as he was reading a paper which the assassin handed him.
Suetonius - The Lives of the Twelve Caesars - translation by J. C. Rolfe 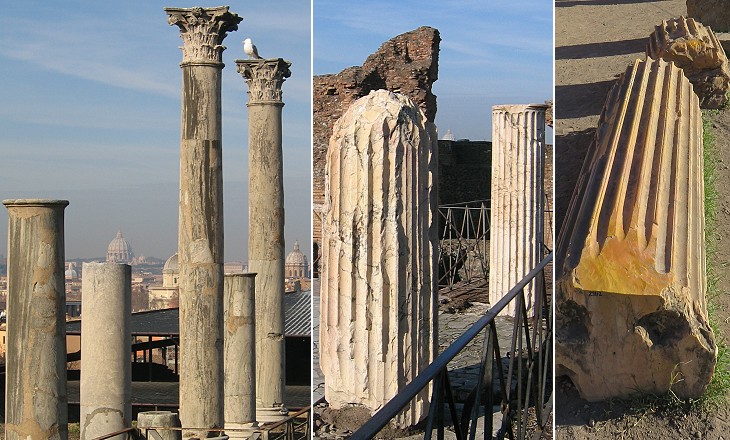 Most of the best known monuments of ancient Greece were built using white marble because it was easily available in the mountains near Athens or on Paros. The size of the Roman Empire provided the emperors with a large choice of marbles for the monuments they built in Rome. They often preferred coloured marbles as one can see at Domus Flavia (you may wish to see a page on the stones of Rome). 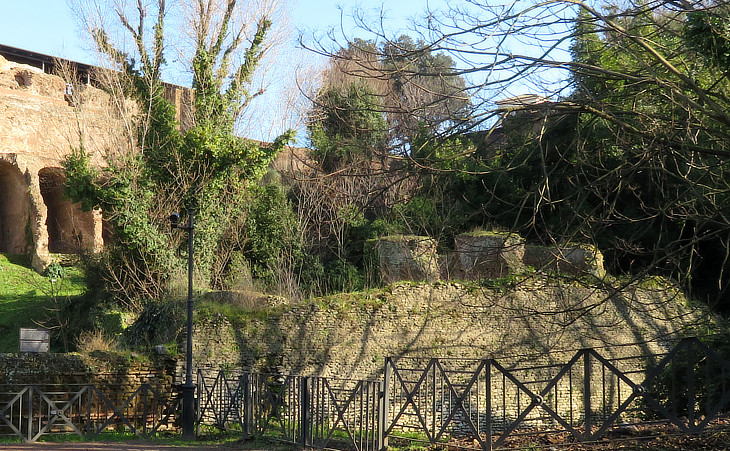 Walls of a fortification of the Frangipane near "Scala Caci"

Miscellanea: (left) 1726 inscription celebrating excavations at "Domus Flavia" by Francesco Farnese, Duke of Parma; (right) 2) inscription celebrating a visit by Pope Benedict XIV in 1746; 3) inscription on a wall of Domus Severiana (when part of it housed a nunnery) with verses from "Pange Lingua" (Sing my Tongue), a hymn by Venantius Fortunatus (530-609) (Faithful Cross! above all other, one and only noble Tree! None in foliage, none in blossom, none in fruit thy peers may be; sweetest wood and sweetest iron! Sweetest weight is hung on thee!); 4) an ancient stone with carved lines and cavities. It might have been used for betting games (see a similar stone at Thamugadi in Algeria); 5) "Rosa canina" flowers near Domus Tiberiana. The ancient Romans loved roses, but they knew only the small varieties (see a page on the Rose Garden of Rome)

Guidebooks and audio guide devices are excellent tools for understanding and appreciating the historical and artistic importance of the Palatine monuments. Obviously they cannot cover some small details which can be noticed by wandering about without reading a guidebook or listening to the audio guide device. 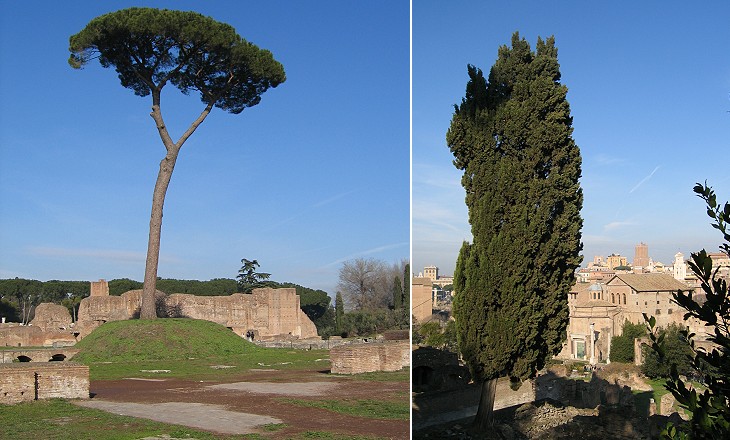 What should we do with a monument or a work of art of the past which is greatly damaged? Italians have had to deal with this question since the XVth century when they started discovering ancient statues. For at least three centuries the answer was: let's try to complete them. Based on this assumption heads of emperors were placed on torsos of athletes and the best sculptors were asked to add arms, legs, hands, feet and fingers to statues which had lost them: a famous example of this approach is the restoration of the Laocoön group: Pope Julius II, based on the advice of Raphael, approved the addition of an outstretched right arm to the bearded figure of Laocoön (in 1957 the missing arm was found: it was not outstretched, but bent down as suggested by Michelangelo).
In the early XIXth century a more cautious view was developed: the reconstruction of the missing parts of Arco di Tito was made using a different stone and without imitating the original decoration. In the late XIXth century a conservative approach which was aimed at the sole conservation of the findings prevailed. While other countries have followed different paths (see a case at Afrodisias), on the Palatine archaeologists have chosen to plant a tree to indicate the location of a monument, instead of building a fake one. A lonely pine on a mound marks the site of a small temple which stood at the centre of a pool.
Mediterranean cypresses act as a windbreaker, in addition to making the area very evocative of its past. Many pines and cypresses have been planted along Via Appia Antica. December 13, 1786. Here there are no signs of winter. The gardens are planted with evergreens; the sun shines bright and warm; snow is nowhere to be seen, except on the most distant hills towards the north. The citron trees, which are planted against the garden walls, are now, one after another, covered with reeds, but the oranges are allowed to stand quite open. A hundred of the very finest fruit may be seen hanging on a single tree, which is not, as with us, dwarfed, and planted in a bucket, but stands in the earth free and joyous, amidst a long line of brothers.
J. W. Goethe - Italian Journey - Translation by Charles Nisbeth
In 1217 Pope Honorius III approved the Order of the Preachers, founded by St. Dominic. The pope lived in Rocca Savella and St. Dominic brought some orange trees from Spain which were planted in the cloister of nearby S. Sabina. Orange trees became an ornamental plant which at first embellished cloisters and later on also private gardens, e.g. Orti Farnesiani on the site of Domus Tiberiana. Villa Adriana was turned into an olive-grove by its XVIIIth century owners and the view of its monuments gained by being surrounded by these trees. Based on this experience archaeologists similarly embellished the slopes of the Palatine. 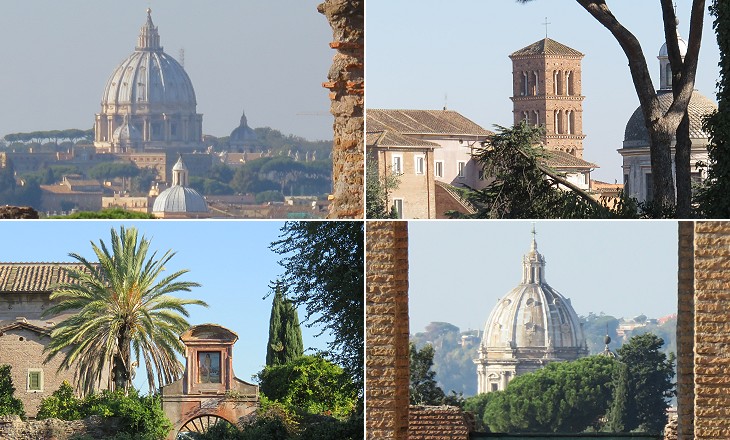 A visit to the emperors' palaces has the added value of allowing views of other monuments, including some of the best known domes of Rome. 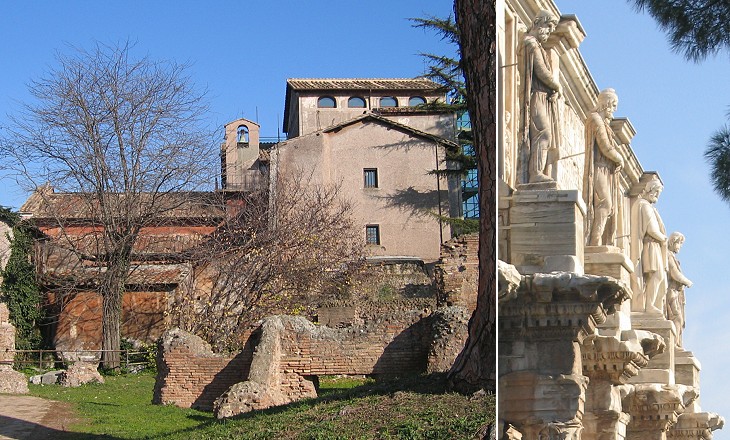 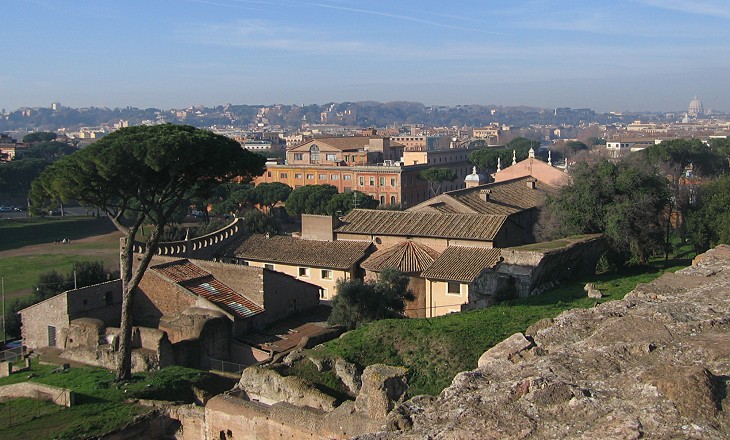 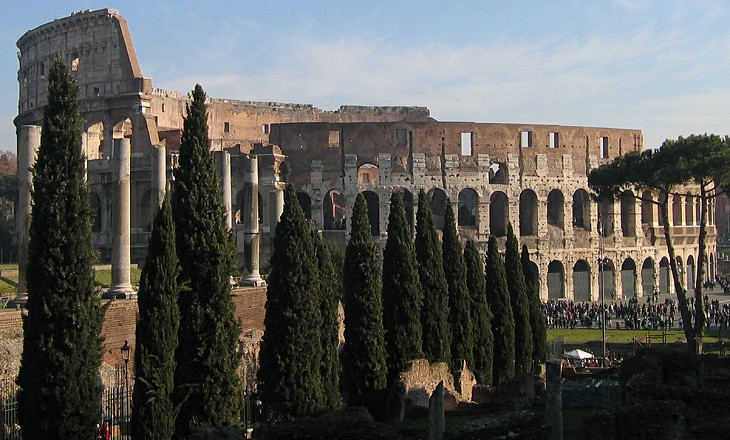 A Grand Tour view of Colosseo

Return to pages on the imperial palaces or on the House of Augustus.