- Roman Zaragoza
(left - Mosaic at Italica; right - decoration at the Alcazar of Seville) 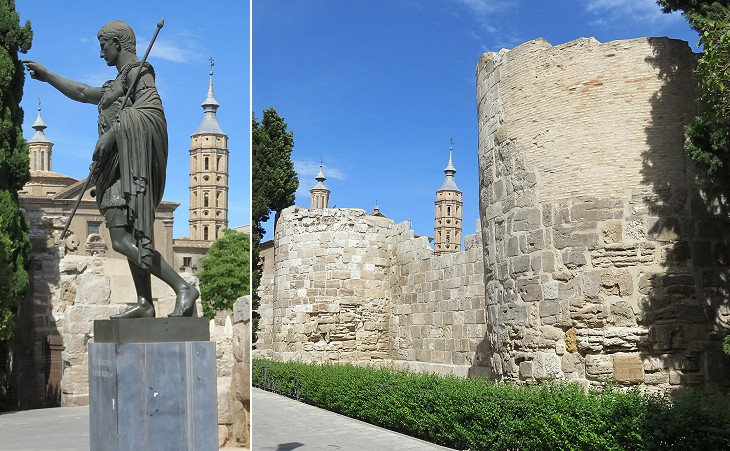 This is reckoned one of the finest cities of Spain situate in a vast plain on the banks of river Ebro which here receives two other rivers, viz the Gallego and the Guerva. The town is large, surrounded with a wall and other antique fortifications of no great strength. The Romans had a colony here in the time of Augustus from whence it is supposed to have obtained the name of Caesaraugusta, by corruption Saragossa. (..) The air is not so hot here as in many other Spanish towns which is the reason of its being inhabited by a numerous nobility.
Thomas Nugent - The Grand Tour - Vol. IV - 1749
Zaragoza is the time-honoured, immortal capital of Aragon. Zaragoza was the Celtiberian Salduba; when Augustus, A.C. 25, became its benefactor, it was called Caesarea Augusta, (Strabo, iii. 225), of which the present name is a corruption.
Richard Ford - A Handbook for Travellers in Spain - 1855 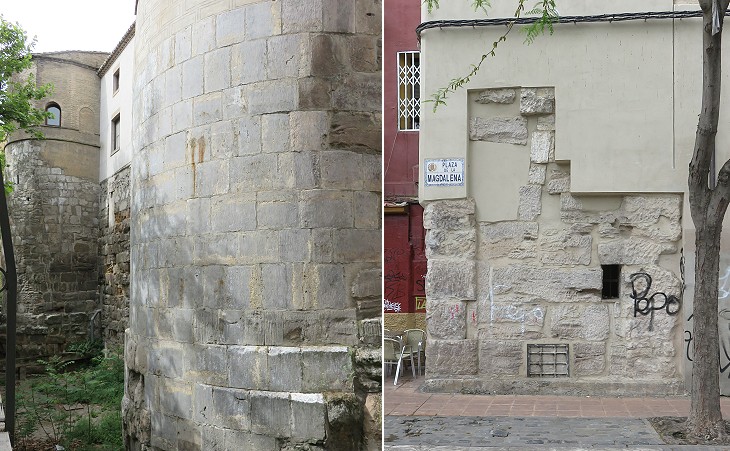 Eastern walls of the Roman town

There are a great many public walks but the finest is that called the Holy Street where people of fashion take the air every evening in their coaches drawn by mules. It is called the Holy Street because a great number of Christians are said to have suffered martyrdom here under its Pagan governours. Nugent
Zaragoza, or Saragossa, is a very ancient town, the foundation of which is incorrectly attributed to the Phoenicians. (..) It was in a flourishing state under the Romans, to whom it became a colony, and was called Caesar-Augusta. It fell into the power of the Goths, who made themselves masters of it about the year 470. (..) The wall of Augustus had four gates, opposite one another.
Alexandre de Laborde - A View of Spain - translated into English for Longman, Hurst, etc. 1809
There are no remains of the Roman city, which Moors and Spaniards have used as a quarry, and whatever antiquities turn up in digging new foundations are reinterred as "useless old stones". Ford
For a long time some sections of the town walls, the names of a few streets and the awareness that the centre of the ancient town was situated near the cathedrals were the only evidence of the Roman past of Zaragoza. 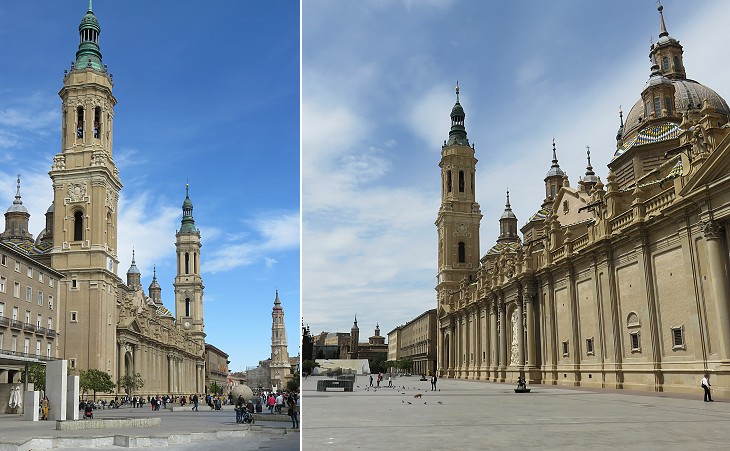 Plaza del Pilar near the left bank of the River Ebro with the two cathedrals of Zaragoza: (left) view from the western Roman walls with Nuestra Senora del Pilar in the foreground and La Seo in the background; (right) view from the eastern end of the square where evidence of the Roman Forum was found in 1988

It is now the see of an archbishop and the seat of an university, the tribunal of the inquisition and likewise the residence of the viceroy of Arragon. The church of our Lady of the Pillar is much frequented by pilgrims who have a magnificent hospital for their entertainment. The above church is so called from a fine jasper pillar whereon the blessed Virgin is said to have appeared to St. James while he was endeavouring the conversion of the Spaniards. They shew both the pillar and the image which she is said to have left of herself in this church which they pretend is the first that was built in the world to the honour of our Saviour. There is nothing extraordinary in the design of the architecture of the church, but the chapel of the Virgin is much admired. Nugent
The two cathedrals now rise in front; for in Spain, that land of contrasts, this provincial city has two metropolitans, while the capital, Madrid, has none. (..) The second cathedral, el Pilar is so called from the identical pillar on which the Virgin descended from heaven. Ford 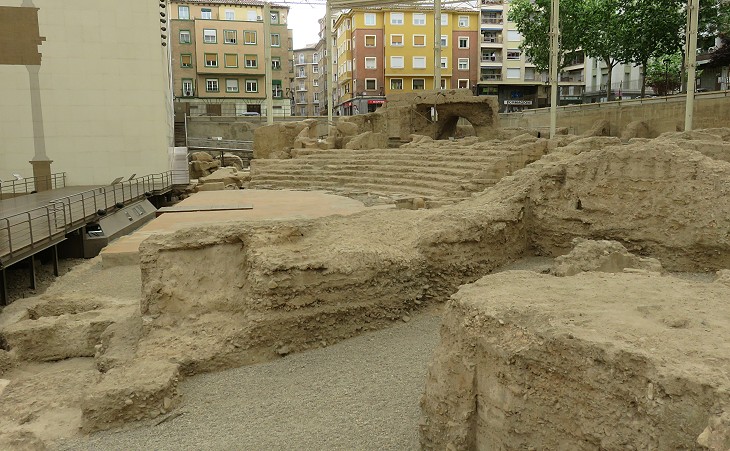 Some walls of a Roman theatre were found by chance in 1972, south of Plaza del Pilar. A major campaign of excavations in 1998-2002 unearthed the lowest of the three tiers of its seating section. It is dated Ist century AD; similar to Teatro di Marcello in Rome it did not exploit a natural slope of the ground and it was built in opus caementicium. Archaeologists estimate it could seat 6,000. It was utilized for a couple of centuries; afterwards some of its stones were used to repair the walls. 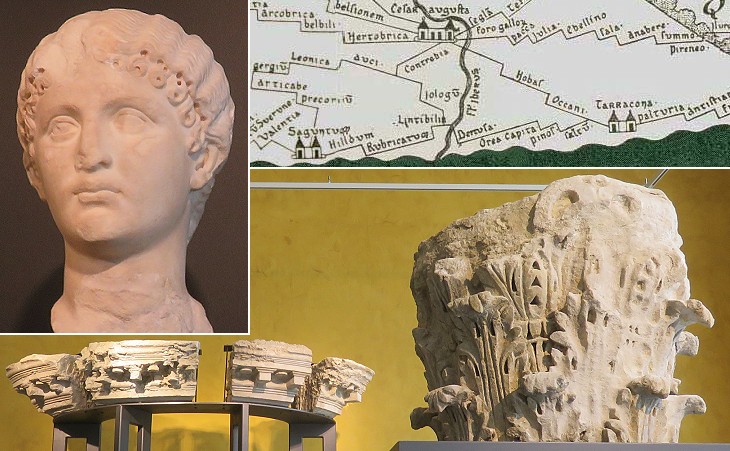 (above-left and below) Museum of the Theatre: head of a member of the Julio-Claudian imperial family and architectural elements; (above-right) "Tabula Peutingeriana" a Vth century AD map of the roads of the Roman Empire showing: Caesaraugusta, Saguntum and Tarraco

Caesaraugusta was very well situated from a communication point of view: the River Ebro was navigable in Roman time and commodities including marbles could easily reach the town; roads linked the town to Tarraco, the capital of the province, and to Saguntum, an important port. In addition a direct road linked Caesaraugusta with France across the Pyrenees and the town was the final point of roads from the inner regions of Spain. The wealth of the town is testified to by the decoration of its theatre. 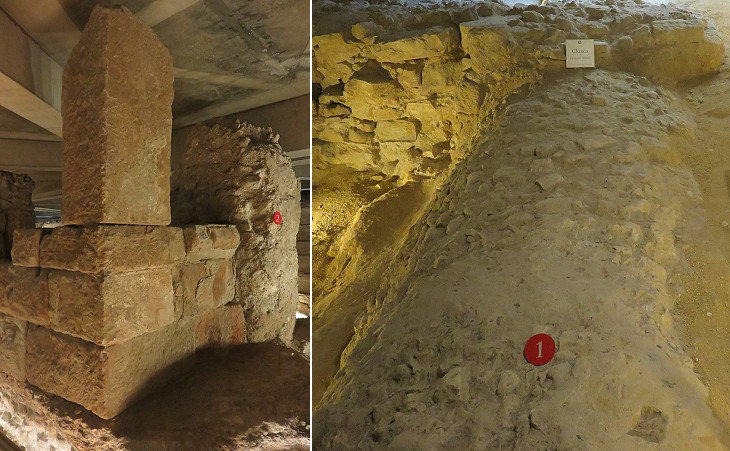 Some remains of the Forum were excavated in 1988-1991 near La Seo. They included a large rectangular portico which was completed at the time of Emperor Tiberius and an underground sewer which discharged wastewater into the nearby river. The portico was flanked by shops and one side of it housed a temple, most likely a Capitolium, a temple dedicated to Jupiter, Juno and Minerva, the deities who were worshipped on the Capitol Hill of Rome and were regarded as a symbol of the city (see the Capitolium of Thugga).
The image used as background for this page shows a statue which was found at the Forum.

There are a great many public squares, but no fountains in the streets, these being supplied with water from the Ebro. This river though it be as large as the Seine at Paris is not navigable here because of the dangerous rocks which lie in the channel. There are two fine bridges over the Ebro, one of stone, the other of wood. (..) As the Ebro passes through the middle of the town there is a handsome key on which the citizens usually walk. Nugent
Zaragoza is placed in a fertile plain which is irrigated by the Ebro; this river separates the city from its suburb, and is crossed by a good stone bridge. (..) Commence sight-seeing at the noble stone bridge which was thrown across the muddy Ebro in 1437. Ford
It is generally believed that a Roman stone bridge stood on the site of Puente de Pedra. According to chronicles it was destroyed and rebuilt in the IXth century during the Arab tenure of the town. In the early XVth century it must have been a ruin, because (Anti)Pope Benedict XIII, a member of one of the most important families of the kingdom of Aragon, promoted the construction of a new bridge. You may wish to see the well preserved Roman bridges of Emerita Augusta (Merida). 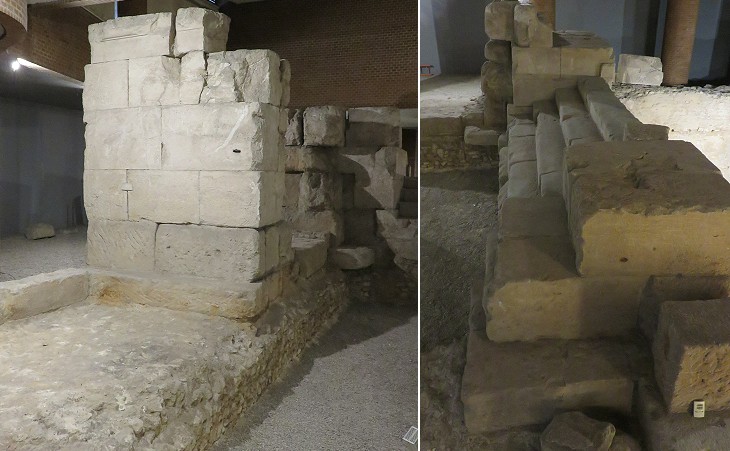 Structures of the Roman river harbour

The north-eastern corner of the Forum gave access to some structures of the Roman river harbour. These were not warehouses for stocking commodities, but rather a sort of vestibule for the passage of merchants to the Forum or of travellers to the boarding quay. The downstream river journey was most likely rather speedy, but the upstream one was very slow because the boats were towed by oxen or horses. 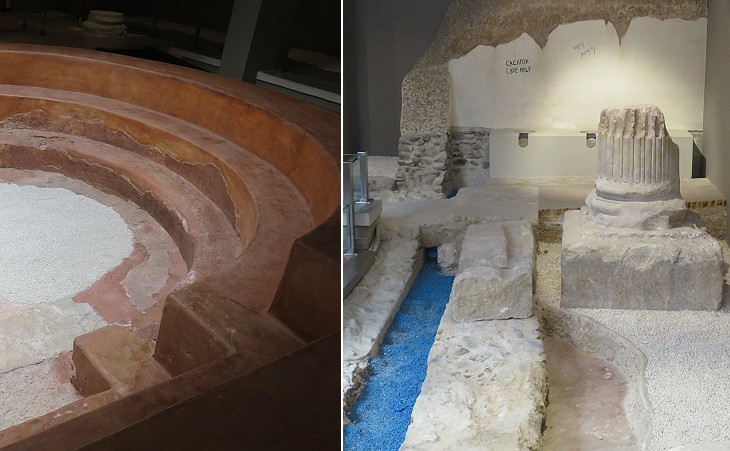 In 1982 evidence of a bath establishment was found between the Forum and the Theatre. Subsequent excavations identified the natatio of a frigidarium (cold room), a portico near the natatio and an adjoining latrine. The bath establishment is dated Ist century AD and its calidarium (hot room) and tepidarium (warm room) have not been found yet. See a page describing a day at a Roman bath establishment according to Seneca, with views of Terme di Caracalla in Rome. 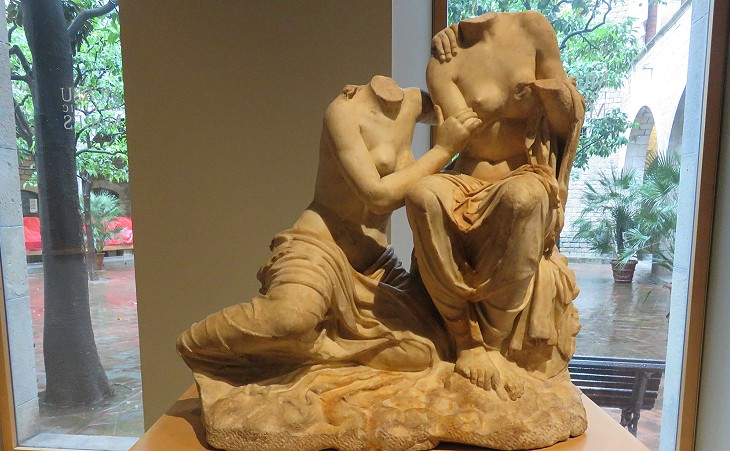 In the palace of the Inquisition (most likely Aljaferia) are two beautiful antique statues, which are placed upon the last landing of the staircase; but they are disguised by inappropriate ornaments, which completely disfigure them: on that to the right, a head has been fixed, with a bandage over the eyes, to represent Faith; the other has a balance in her hand, to represent Justice, and they are covered with drapery, as void of taste as it is ill executed. Laborde
The statues mentioned by Laborde are no longer at Aljaferia, but some statues from Roman Zaragoza are on display in Spanish museums. In general they were imported from Rome, Greece or today's Turkey. 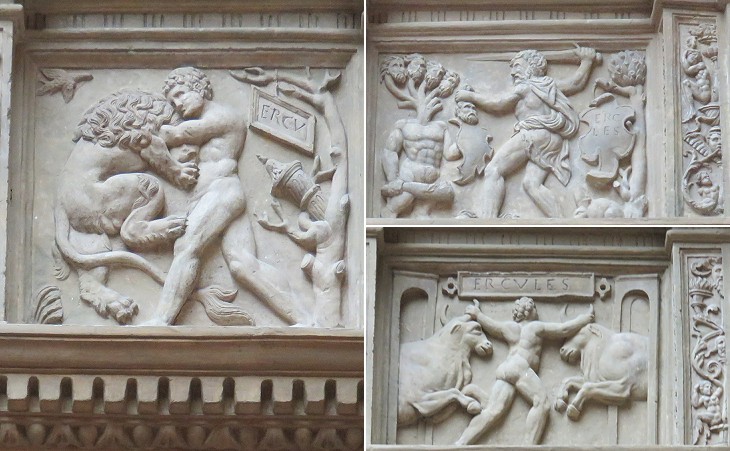 The house which no amateur or architect should fail to visit, is that of the Infanta, which was built, in 1550, by the wealthy merchant Gabriel Zaporta, in the richest Aragonese cinque-cento style. Enter the beautifully-decorated patio, and observe the fluted pillars and torsos, the projecting medallions with most Italian-like heads. The magnificent staircase has a rich roof with groups of musicians, but all is hastening to decay. Ford
The ancient past had an influence on the decoration of the Renaissance palaces of Zaragoza. Many towns of Spain (e.g. Seville and Toledo) claimed to have been founded by Hercules, so it is not surprising to see many references to him in the reliefs of Patio de la Infanta. The palace was damaged by fire in 1894. In 1903 the reliefs were disassembled and were bought by a French art dealer who shipped them to Paris. They were brought back to Zaragoza in 1958; in 1980 they were reconstructed inside the headquarters of a local bank. 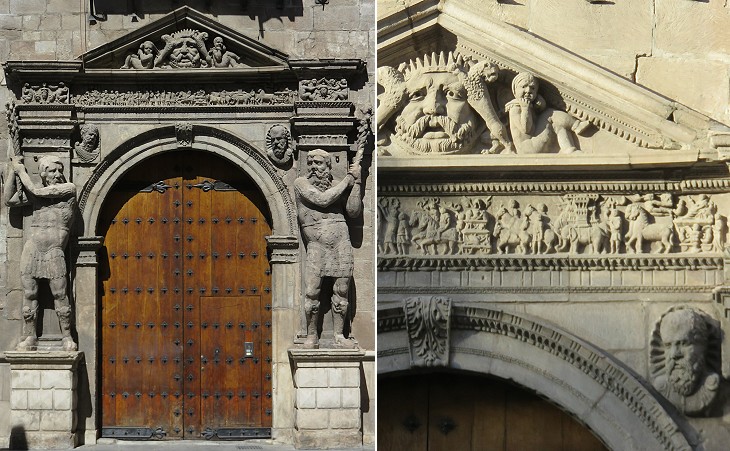 Renaissance portal of Palacio de los Luna, the family of (Anti)Pope Benedict XIII aka Casa de los Gigantes. The statue on the right portrays Hercules, that on the left Geryon, an evil giant whose cattle Hercules stole

The streets are large and well paved, the houses for the most part built of brick four stories high more beautiful and uniform than those of Madrid. (..) In the abovementioned Holy Street are several handsome palaces of the nobility. Nugent
Several of the streets are straight, and of a breadth by which they might make a figure amongst those of the most beautiful towns: one particularly deserves to be distinguished; it is in a direct line, very wide, extremely long, and the houses in it are very regular: this is Calle del Coso (..) Coso is a corruption of Fosso, because it was the moat of the ancient Roman town; or what is still more likely, of Corso, a name which might have been given to it, as being intended for public festivals. Laborde
The chief street in Zaragoza is el Coso. (..) Here are many good specimens of Zaragozan architecture: observe la Casa de los Gigantes. Ford
The portal is interesting for a detail which is typical of Roman triumphal arches, i.e. the depiction of a triumphal procession in a very long and small relief (see those in the arches of Trajan at Benevento and of Septimius Severus in Rome). 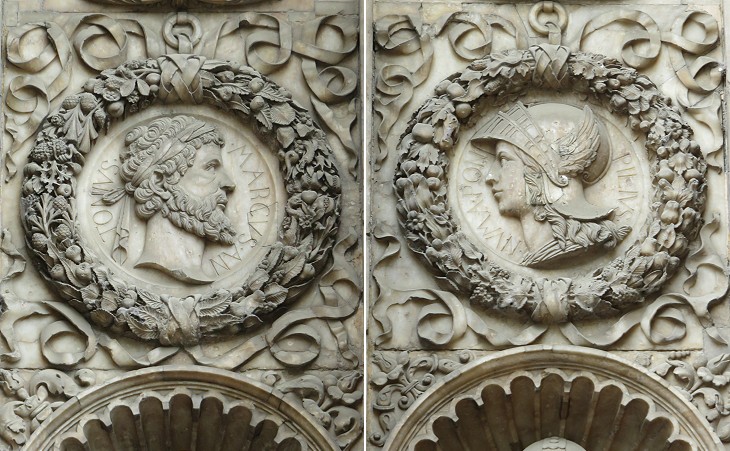 The convent of the Jeronymites, called Santa Engracia, was founded by king Ferdinand and Isabella. (..) The church of this convent (..) has a portal in the form or plan of an altarpiece, of two stories of architecture. (..) The arch of the portal is ornamented with heads of Seraphim, and close beside two ancient medallions, under which are written these words: Numa Pompilius, M. Antonius. Laborde
The church was destroyed by the blowing of mines by the French in 1808, but the portal with its reliefs was not greatly damaged. The names of Mark Antony and Numa Pompilius were most likely added during one of the many restorations/modifications of the portal; they do not make much sense, especially that of Mark Antony in a town which is named after Augustus.