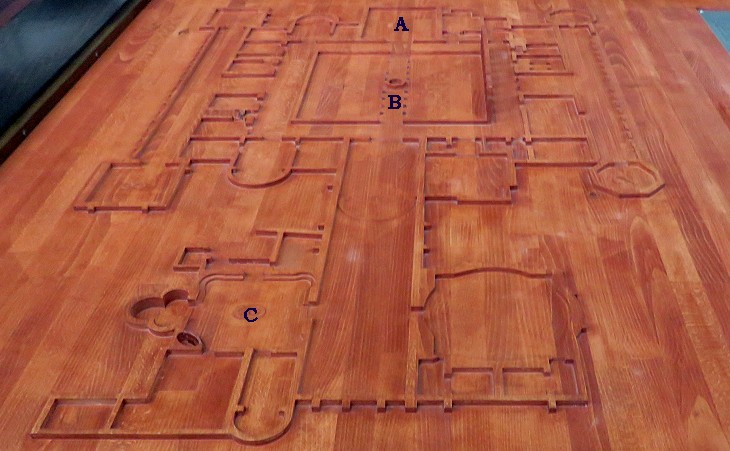 Model of the archaeological site: A) "oecus" hall for receiving guests; B) courtyard/garden; C) baths

The villa is located south of the Cantabrian Mountains which separate Meseta Central, the great central plateau of Spain, from the the narrow coastal strip along the Bay of Biscay. This part of the Iberian peninsula was the last to be conquered by the Romans. They did it in 29-19 BC with a series of campaigns. Emperor Augustus wrote in Res Gestae Divi Augusti, a record of his life and accomplishments: When I returned from Spain and Gaul after successful operations in those provinces, the Senate voted in honour of my return the consecration of an altar to Pax Augusta in the Campus Martius. (Loeb Edition).
The Romans conquered the region to ensure its tribes would not raid the provinces which they already ruled and because of its mineral resources of iron and lead. The Romans founded a number of colonies to strengthen their control over the region. Initially there were some rebellions, but eventually the local elites accepted the new situation and the changes it brought about in terms of language, administration, laws, etc.
Villa La Olmeda was founded in the late Ist century AD, but approximately at the mid of the IVth century it was almost entirely redesigned, so it can be considered coeval with Villa di Materno at Carranque. It was discovered in 1968 and a series of archaeological campaigns brought to light the main building and a number of ancillary facilities. In 2009 its beautiful mosaics were sheltered by a structure designed by the architectural firm Paredes Pedrosa. 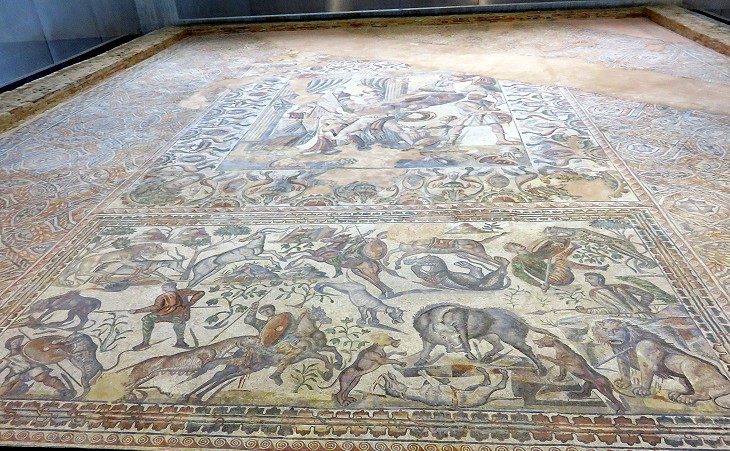 Mosaic of the "oecus", the main hall

Similar to Villa del Casale in Sicily the villa was the residence of the owner of a latifundium, a large estate. Archaeologists have not been able to identify any of the landlords who lived there and therefore the villa is named after the elms which grow in the area. The ancillary buildings housed lodgings for servants, stables, warehouses and shelters for farming equipment. There is no evidence of fortifications, which instead can be seen in a mosaic at the Museum of Carthage showing the life in one of these villas. The landlord received his guests in a large rectangular hall on the eastern side of the courtyard/garden around which the building was structured. The floor of the oecus was decorated with a complex mosaic which was oriented towards the entrance to the hall. 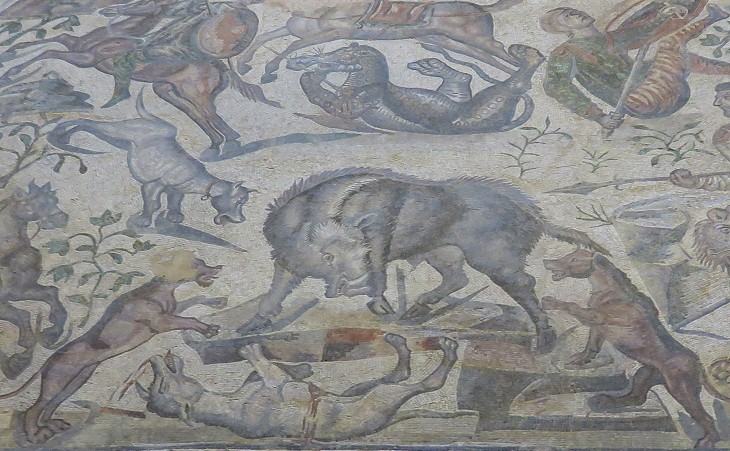 Mosaic of the "oecus": detail of its lower part depicting a wild boar

The first thing the guests noticed when they saw the mosaic was a series of hunting scenes showing a variety of wild beasts, a popular subject also in other parts of the Empire e.g. in Algeria. A special evidence was given to the depiction of a wild boar surrounded by hounds, one of which is bleeding to death. This choice was most likely motivated by the fact that the landlord himself might have hunted the wild boar (see a coeval mosaic in Tunis) in the forests which covered the nearby mountains and by the animal being mentioned in two popular Greek myths: the Killing of the Calydonian Boar by Meleager (see a sarcophagus in Rome) and Adonis Hunting the Wild Boar (see a mosaic at Carranque). 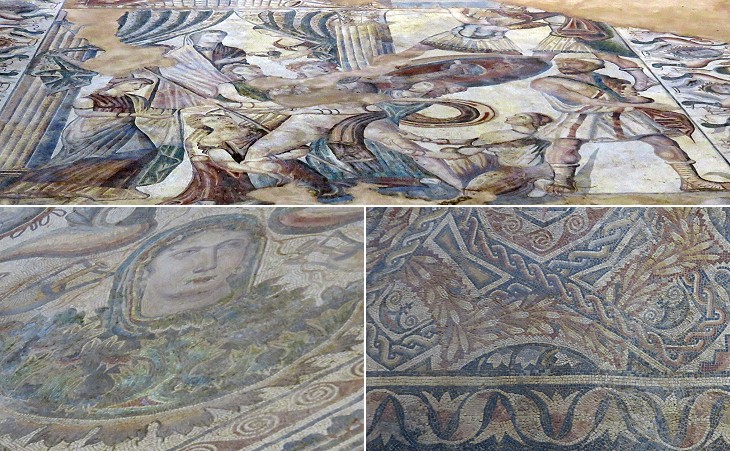 Mosaic of the "oecus": (above) Ulysses (right) unmasks Achilles (centre) among the daughters (left) of Lycomedes, king of Skyros; (below-left) Spring; (below-right) detail of the geometric band

The Roman yoke was imposed by force on many countries of Europe, Africa and Asia. It did however create shared artistic and literary values, at least among the upper classes of these countries. The episode of the Iliad which decorated the central part of the "oecus" can be seen in floor mosaics at Tipasa (Algeria - with a description of the episode), Kourion (Cyprus) and Zeugma (Turkey). Some of these mosaics are hung on the walls of museums and we can see them better than that at La Olmeda. Mosaic of the "oecus": band surrounding the scene with Achilles and Ulysses

We do not know the names of those who enjoyed life in this beautiful villa, but we know their faces. A very interesting decorative band surrounds the central scene of the mosaic. It shows couples of geese with dolphin-like tails and between them a hanging medallion. The latter houses a portrait of the head of a young man (or woman). They are not gods or mythological heroes, thus it is very likely that they are the relatives of the landlord who commissioned the mosaic. These medallions are a rare depiction of oscilla, small reliefs which were hung on trees during country festivals (see one on Gozo, an island near Malta and a second one at the Archaeological Museum of Catalonia in Barcelona). 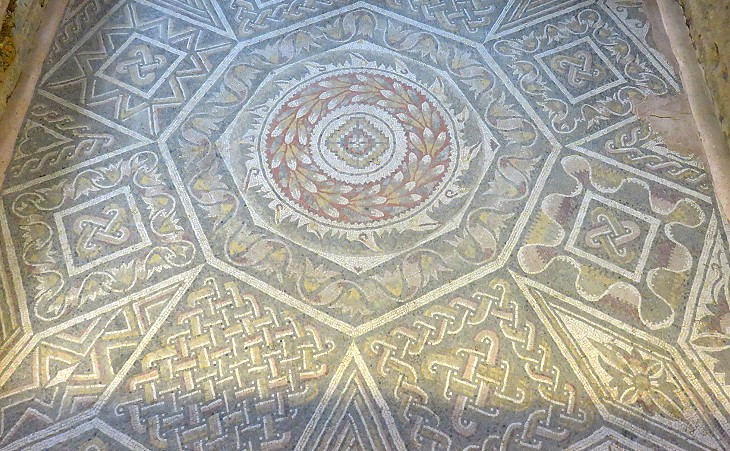 Mosaic of a small bedroom

Some small rooms let a better view of their floor mosaics. That of the "oecus" is finely executed, but the geometric ones which embellish the rest of the villa are of a superior quality for the variety of their decorative patterns and the skill by which some of them were given a three-dimensional illusionistic appearance.

Other geometric mosaics in the residential area showing the prevalence of yellow and red colours; the image used as background for this page shows a four-petal flower, another detail of a geometric mosaic

The leader of the team of mosaic makers who worked at the villa must have had an illustrated catalogue of decorative patterns which he showed to the landlord to choose from. We know that the printing press was yet to be invented, but in one way or another instruction manuals and drawings about mosaics were widely circulated within the whole Roman Empire (see some geometric mosaics at Villa del Casale, at St. Albans in England and near Bordeaux in France). 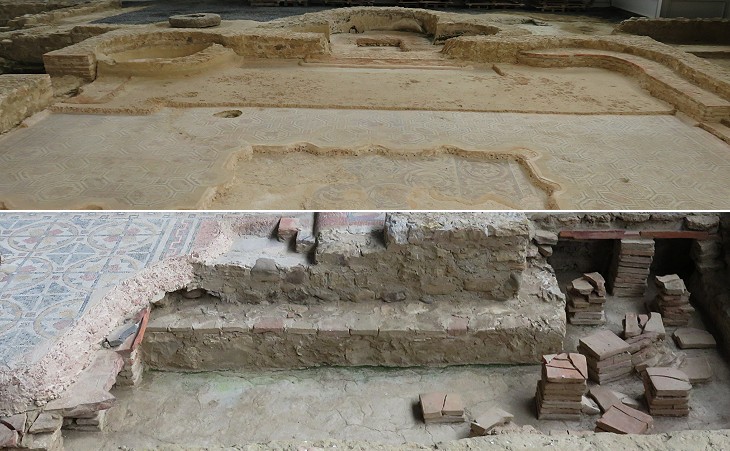 Small private baths were built at the same time as the main building to which they were linked by a wide corridor. The apodyterium is rather large when compared to the frigidarium, tepidarium (warm room) and calidarium (hot room), which are pretty small. See a page on how the ancient Romans spent a day at the baths. Large circular hall opposite the baths with a hypocaust heating system

The purpose of this large hall and of its adjoining four very small rooms is still to be understood. It might have been used for relaxing and socializing after a bath and perhaps for having a nap in one of the small rooms. Villa la Olmeda is situated at an altitude of approximately 900 meters (3,000 feet) which explains why many parts of the villa had a heating system. 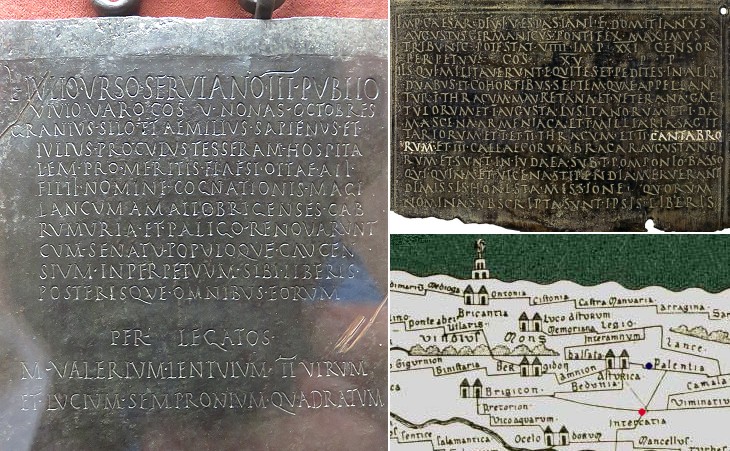 (left) Archaeological Museum of Valladolid: early IInd century AD bronze inscription found in 1985; it states a pact of friendship between the towns of Intercatia and Cauca (today's Coca), the likely birthplace of Emperor Theodosius; (right-above) Museum of Israel: bronze inscription of the time of Emperor Domitian which mentions troops from Cantabria among those who fought with the Roman Army in Palestine (see the tombstone of a soldier from Cantabria who fought on the Rhine border); (right-below) detail of "Tabula Peutingeriana", a Vth century map of the roads of the Roman Empire, showing the lighthouse at Brigantia which was likely built by Emperor Trajan to facilitate the circumnavigation of Spain; the blue dot shows Palencia, the town in the district of which Villa La Olmeda is located; the red dot shows Intercatia

The Romans built roads and harbours to facilitate the access to the north-western part of Spain and we know of a number of towns which they founded, some of which still exists today. They did not however create an autonomous province for this territory as they did in the south-western part of Spain where Augusta Emerita (Merida), the capital of Lusitania, became a large and wealthy city. This northern region continued to be part of Hispania Tarraconensis, although it was very remote from Tarragona, the capital of the province on the Mediterranean Sea. 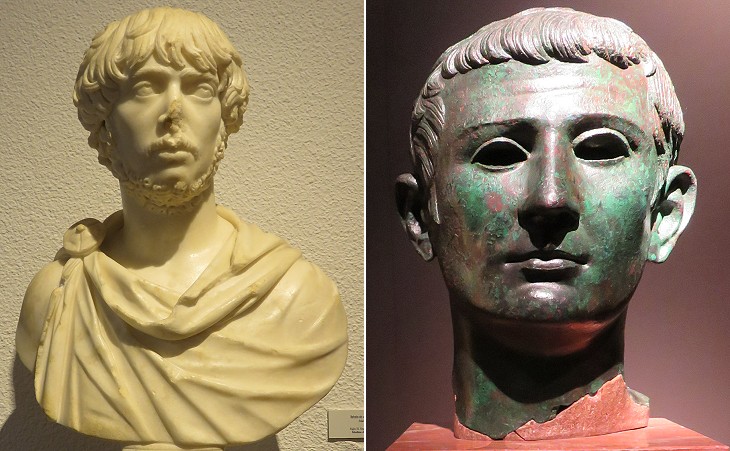 Notwithstanding their being rather small, the towns of the region had their forums, tribunals, baths, etc. and they embellished them with works of art which were not made locally, apart from the floor mosaics. 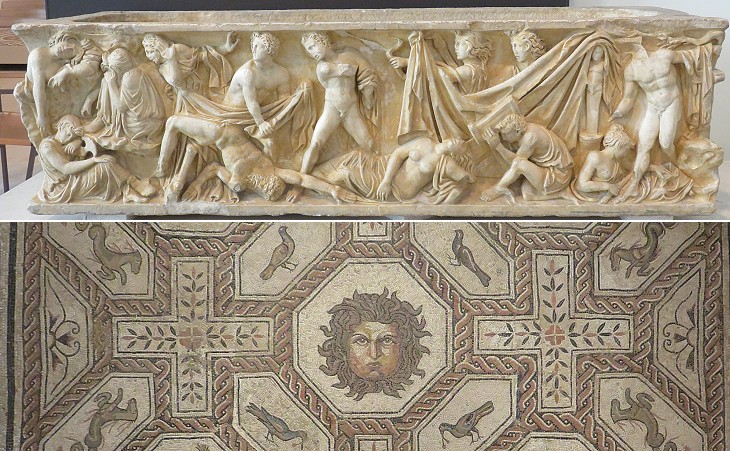 Works of art from the environs of Palencia in the National Archaeological Museum of Madrid: (above) sarcophagus showing Orestes killing Aegisthus and Clytaemnestra; (below) mosaic with a Gorgon