- Ronda
(left - Mosaic at Italica; right - decoration at the Alcazar of Seville) 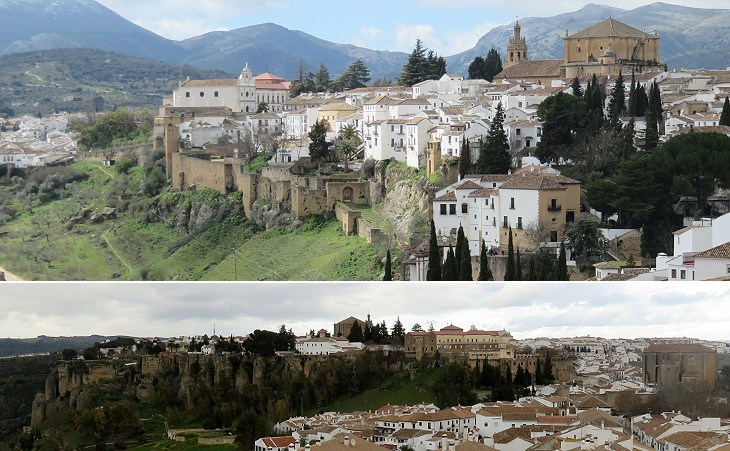 Ronda, say the Spaniards, is the Tivoli of Andalucia, but Trajan (sic! Hadrian), although an Andaluz, built no villa here, and its Maecenas was the Moor, from whom it was taken by surprise by Ferdinand in 1485. (..) Ronda is the cool summer residence for the wealthy of Seville and Malaga. Being highly salubrious, the longevity is proverbial.
Richard Ford - A Handbook for Travellers in Spain - 1855 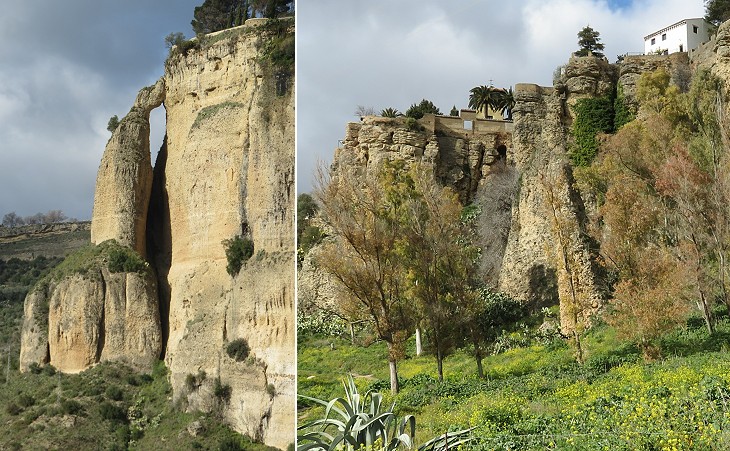 Rock upon which the town stands seen from the Moorish mills

The town hangs on a river-girt rock, and is only accessible by land up a narrow ascent guarded by a Moorish castle. (..) The Guadalvin (Arabic: the "deep stream") called lower down El Guadairo, girdles Ronda, as the Tagus Toledo. Ford
Ronda was considered as impregnable. It was situated in the heart of wild and rugged mountains, and perched upon an isolated rock crested by a strong citadel, with triple walls and towers. A deep ravine, or rather a perpendicular chasm of the rocks, of frightful depth, surrounded three parts of the city.
Washington Irving - Chronicle of the Conquest of Granada - 1829 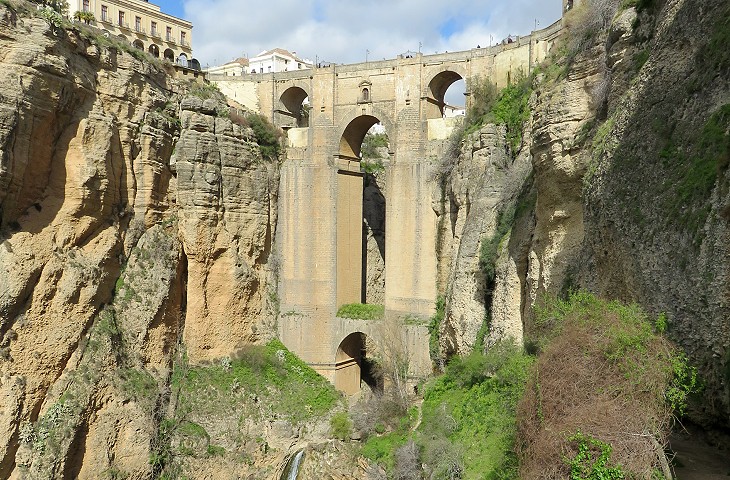 The Tajo, or chasm, which divides the old and new town, is the emphatic feature. (..) The Moorish mills in the valley must be descended to, passing out of Ronda by the old castle. The view from them, looking up to the cloud-suspended bridge, is unrivalled. The arch which joins the Tajo hangs some 600 ft. above, like that in the Koran, between heaven and the bottomless pit. (..) There is but one Ronda in the world, and this Tajo cleft as it were by the scimitar of Roldan, forms (..) its heart and soul. Ford The modern bridge, spans a gulf nearly 300 feet wide, and connects the new and old town, was built in 1761, by Jose Martin Aldeguela, who was dashed to pieces by a fall: standing on it, " 't is dizzy to cast one's eyes below." Ford
The construction of the bridge required more than forty years (1751-1793) and the account that its architect fell from the bridge is a legendary one as records indicate he died of natural causes in 1802 at Malaga. 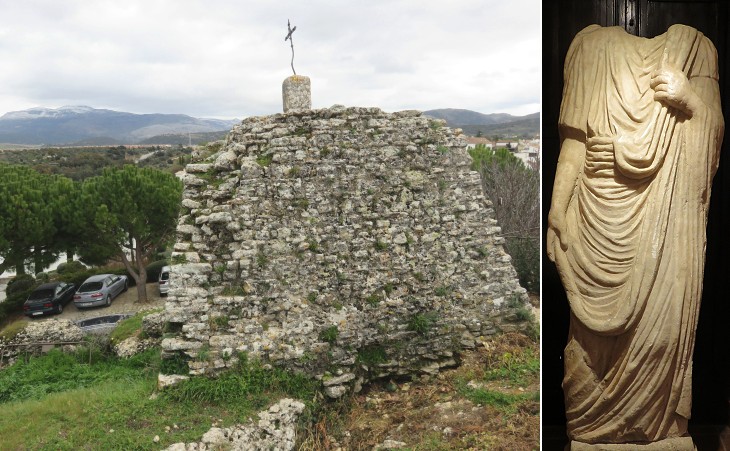 (left) Torre del Predicatorio, a cistern of the Roman aqueduct; (right) ancient statue in the Museum of Ronda at Palacio de Mondragon

The well protected rock housed a settlement as early as the VIIIth century BC. During the Roman rule it became a small town known as Arunda. The main evidence of this historical period is a cistern of an aqueduct. Approximately during the IVth century AD the importance of Arunda declined; eventually the site was populated only by peasants. 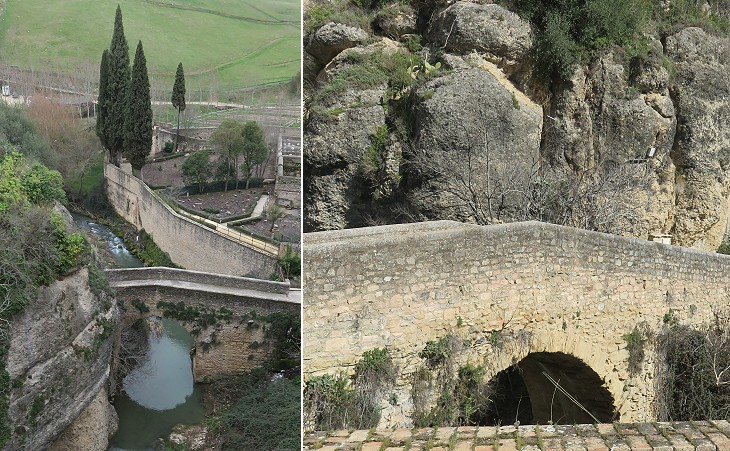 Ronda returned to acquire the aspect of a town in the XIth century when it became the seat of a taifa, a small emirate run by the Banu Ifran, a Berber tribe from Algeria. Madinat Runda, the Muslim town, included a neighbourhood at the foot of "El Tajo" where a stone bridge was built. 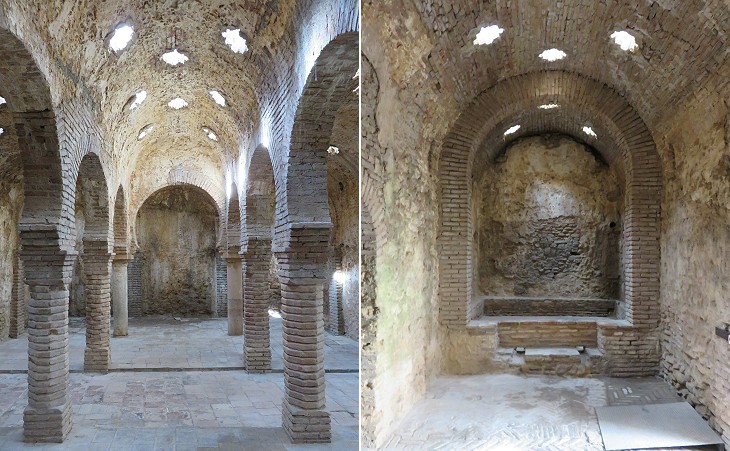 Travellers could rest at a bath establishment near the bridge. It is a relatively large complex. It was abandoned after the Christian conquest and eventually it was covered by debris carried by floods. It was discovered in the early XXth century; the area was acquired by the State in 1935 and subsequently excavated. It has the three usual halls (hot, tepid and cold) of the Roman tradition and it is the largest and best preserved Arab bath establishment in Spain. 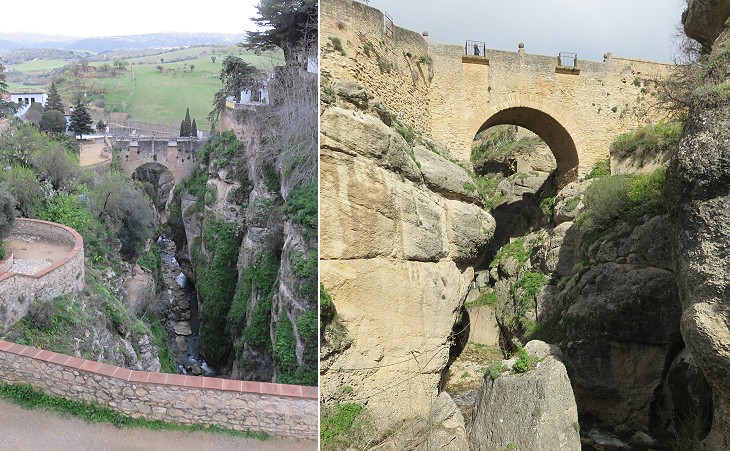 Puente Vieijo or Puente Romano: from the walk along "El Tajo" (left) and from Puente Arabo (right)

Ronda knew a major development when it became part of the Emirate of Granada in the XIVth century; this bridge was most likely built at that time, although it is also referred to as the "Roman Bridge". 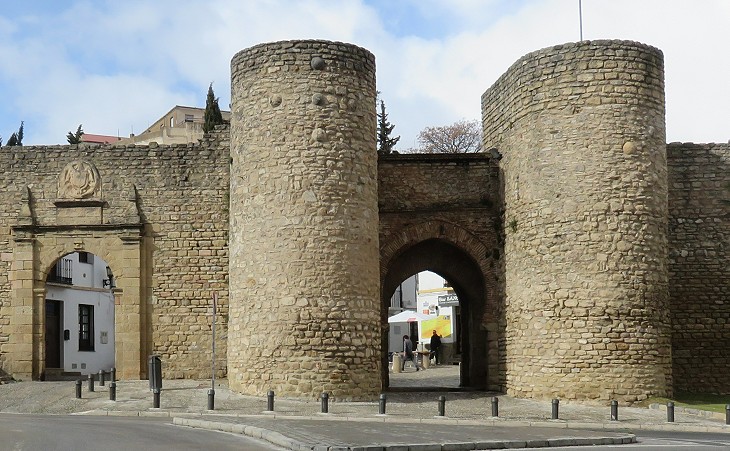 Puerta de Almocabar, from "al-maqabir" (graveyards) because of an adjoining (lost) Muslim cemetery; to its left a Renaissance gate with the coat of arms of Emperor Charles V

I went out of Gibraltar to the town of Ronda, one of the strongest and most beautifully situated fortresses of the Muslims. The qadf there was my cousin.
H. A. R. Gibb - Selection from the Travels of Ibn Battuta in 1325-1354
After the conquest of Tarifa in 1292 by Castile, the Emirs of Granada could not receive help from other Muslim states. An attempt by the Marinid Sultans of Morocco to gain control of the European side of the Strait of Gibraltar failed in 1340. Notwithstanding their isolation and a number of civil wars the rulers of Granada managed to retain their independence for 200 years. In this long struggle Ronda played a key role as it was the westernmost town of the Emirate. Imposing towers protected the Almocabar Gate, the southern access to the town, the only one which did not have the natural defence of the ravine. The gate was redesigned in the XVIth century and its current Moorish aspect is the result of changes made in 1964. 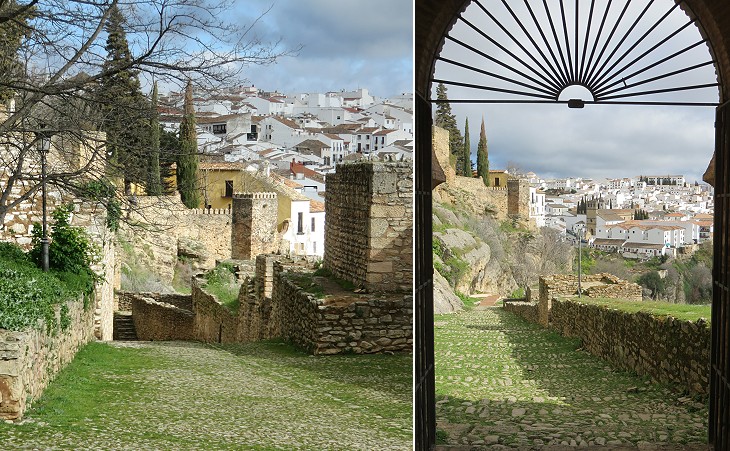 Steps along the eastern walls going down to Puente Arabo

The bitter task of descending and raising water passed into a proverb, "Dios me guarde del zaque de Ronda" (God keep me from the water-jars of Ronda). Ford
The northern end of the town did not require fortifications because the defence was granted by "El Tajo", but the western and eastern sides were protected by walls. A series of tower and gates protected the access to the town from Puente Arabo and the neighbourhood of the baths. 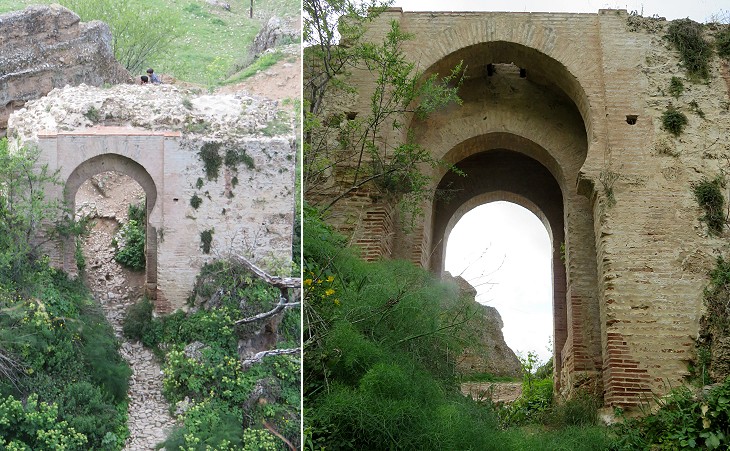 The western side was protected by walls which went down from the top of the rock to mills in the valley to protect these facilities and to include some fields where cattle could be kept during a siege. The imposing gate on this side was a triple one (see that at Puerta de Sevilla in Carmona). 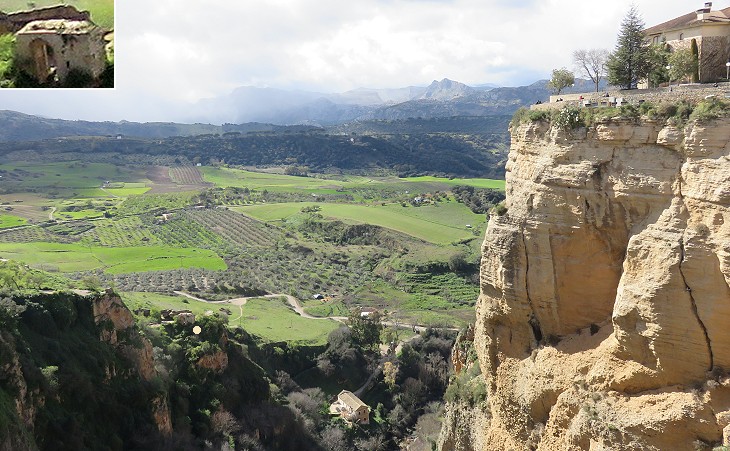 The view over the mountain panorama, is one of the finest in the world. Ford
The distress of Ronda increased hourly. The marques of Cadiz, having possession of the suburbs, was enabled to approach to the very foot of the perpendicular precipice rising from the river on the summit of which the city is built. (..) "They fired not merely stones from their ordnance," says a chronicler of the times, "but likewise great balls of iron cast in moulds, which demolished everything they struck. They threw also balls of tow steeped in pitch and oil and gunpowder, which, when once on fire, were not to be extinguished, and which set the houses in flames. Great was the horror of the inhabitants: they knew not where to fly for refuge: their houses were in a blaze or shattered by the ordnance; the streets were perilous from the falling ruins and the bounding balls, which dashed to pieces everything they encountered. At night the city looked like a fiery furnace; the cries and wailings of the women between the thunders of the ordnance reached even to the Moors on the opposite mountains, who answered them by yells of fury and despair." All hope of external succour being at an end, the inhabitants of Ronda were compelled to capitulate. Ferdinand was easily prevailed upon to grant them favourable terms. The place was capable of longer resistance, and he feared for the safety of his camp, as the forces were daily augmenting on the mountains and making frequent assaults. The inhabitants were permitted to depart with their effects, either to Barbary, Granada, or elsewhere, and those who chose to reside in Spain had lands assigned them and were indulged in the practice of their religion. (..) The first care of the good marques of Cadiz on entering Ronda was to deliver his unfortunate companion-in-arms from the dungeons of the fortress. (..) Their chains were hung as pious trophies against the exterior of the church of St. Juan de los Reyes in Toledo, where the Christian traveller may regale his eyes with the sight of them at this very day. Irving Ronda is an intricate old Moorish town of tortuous lanes and ups and downs. Ford
A small minaret which was turned into a bell tower and some elements of the main mosque which were incorporated inside a church are among the few remaining traces of the Moorish period in addition to the urban layout and the fortifications. 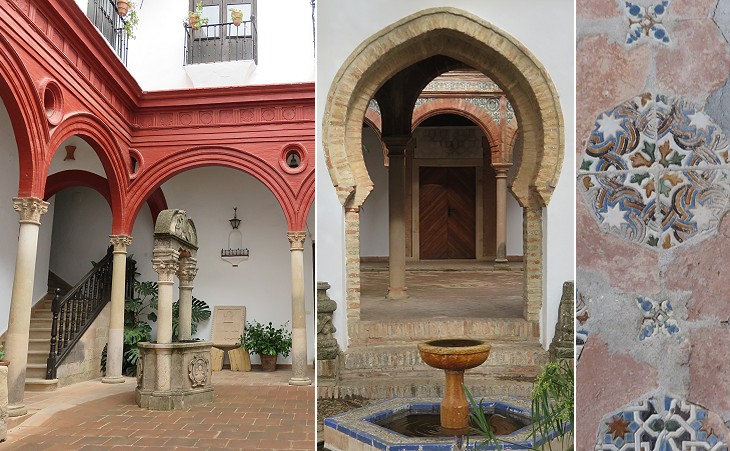 A large palace which now houses the Museum of Ronda was built in the XVIth century on the site of that of the Arab governors of the town. It can be regarded as an example of Renaissance style, but some parts were designed in the Moorish one. The fine stone-built Plaza de Toros, or bull arena, is in the new town. After the bull-fights, vultures - which the natives swear are eagles - hover around, attracted by the dead animals. (..) The Plaza itself and all the cells for the bulls, and the contrivances for letting them in and out, are well worth examination by tauromachians. The fairs and Fiestas are of the first order. May 20th is, or rather was, the time to see Ronda, its bulls and Majos (men who distinguished themselves by their elaborate outfits) in their glory. This is the great leather, saddlery, embroidered gaiters, garters, mantas, and horse fair, to which many detachments of English officers ride from the Rock, and some in one day; but commonplace civilization is ruining the national and the picturesque. The Maestranza, or equestrian corporation of Ronda, takes precedence over all others. Ford
The Real Maestranza de Caballeria de Ronda was founded in 1572 by the local nobility.
There is one town that would be better than Aranjuez to see your first bullfight in if you are only going to see one and that is Ronda. That is where you should go if you ever go to Spain on a honeymoon or if you ever bolt with anyone.
Ernest Hemingway - Death in the Afternoon - 1932
The image used as background for this page shows a 2005 statue by Nacho Martín outside Plaza de Toros which depicts a Toro de Lidia, a Spanish fighting bull.